April 25, 1848. Crozier and Fitzjames make their way to Victory Point on King William Island, where they sign a note kept in a stone cairn. It’s kept there for explorers to sign as they make their way through. Unfun fact: This note is the last IRL historical record of James Fitzjames.

There had been signs of sickness earlier. Just before the carnival, he’d discovered that his hairline was bleeding. The exertion of the long walk has only made it worse. Maybe that’s why he’s become so chatty with Crozier, so revealing. He tells him of the circumstances of his birth–he was a product of an affair and adopted by people who couldn’t bother giving him a better name than “James Fitzjames”–and of how he came to be here on this expedition. He’d saved Sir John Barrow’s son from a scandal in Singapore and in return, Barrow promoted him. He’s a fraud from tip to tail, you see. 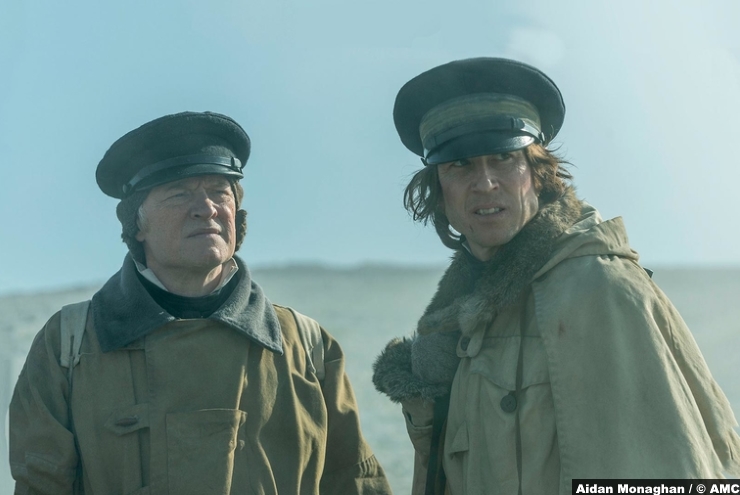 But Crozier doesn’t. As he sees it, Fitzjames may have had a lucky break or two, but he was the one who left home as a 12-year-old and built a career. He actually did the work and has shown the courage. Fitzjames tries to dismiss it as vanity instead, but as Crozier points out, all that’s gone now. Fitzjames is free.

While they’re splitting a “CROZIER AND FITZJAMES, BEST FRIENDS FOREVER” pendant, they get the news about the “attack” on Irving and his men. Just as I expected, Hickey left no witnesses. They bring Lady Silence, who is still hovering around the expedition, and go check it out. It’s very upsetting for her–the Netsilik people killed weren’t her family, but she knew them–and upsetting in a different way for Crozier. Right away, he suspects that something isn’t right.

And something isn’t right. Because while he’s away, Hickey’s merry band of mutineers are quietly arming themselves, while trying to rile up other men with tales of an impending attack. It’s like camping in the woods, in that it’s gotten so spooky in the fog that some of them are able to convince themselves they hear footsteps and whistling. Well, either it’s group hysteria or Tuunbaq has learned to whistle. I hope it’s the latter.

When Crozier’s group returns, they realize they can’t bring Lady Silence in with them. Goodsir tells her that he’ll try to smooth the way for her and that he hopes she doesn’t take this as an example of what the English are like in general. Uh-huh. 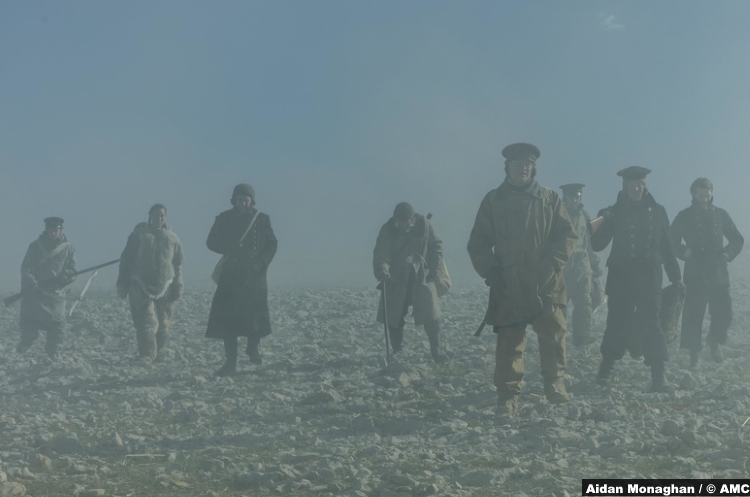 Inside the camp, Crozier has Goodsir cut open Irving’s stomach. Crozier had seen seal meat on the Netsilik sled and following a hunch, that’s exactly what they find inside Irving. So they fed him and then they slaughtered him and his men. Cunning!

Crozier calls for gallows to be made in light of the immediate court martial he’s ordering and for everyone to be disarmed unless they’re a wardroom officer or higher. That includes Marines like Tozer, who’s going to be arrested, just like Hickey. Meanwhile, Goodsir notices that someone has gotten into the “Peruvian”–the Chekhov’s coca wine that was introduced last week. Mr. Bridgens (John Lynch), who’s been assisting Goodsir, has no idea who drank it. 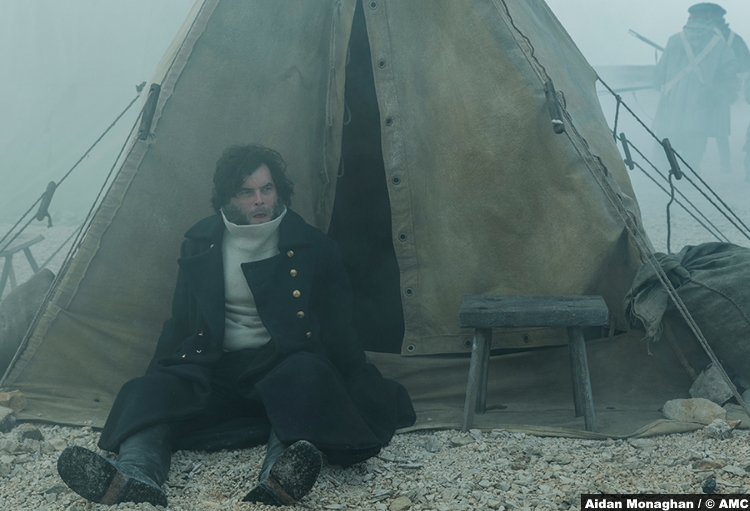 It was actually an unattended Mr. Collins, who is now high AF. Anyway, back to our court-martial. Before allowing Tozer and Hickey to speak, Crozier tells them about the advance party being found dead. He says that he stands by his decision not to tell them earlier, as to protect their morale. But he thinks it’s important that they know that no one is coming for them. They have only each other. And on that note, while he knows that some men in the camp are mutiny-sympathizers, he wants them to know that if they’d joined up with Hickey, “he would have burned through you like fuel.” As proof of that, he shows them the seal meat Irving was going to bring back and tells them that the Netsilik group Hickey killed were just a family. He lays it on a bit thick with the girl’s age–“A little girl. No more than six years old.”–but his speech is effective. So much so, that when he asks for volunteers to “man the rope,” hands shoot up.

Finally given their turn to speak, Hickey reveals the secret of Crozier’s Dear John letter and how he was going to resign his position and in Hickey’s spin, abandon them all. He doesn’t get far, though, before there’s a giggle in the distance. It’s Mr. Collins, gamboling through the court-martial, chased by Tuunbaq. He looks like my 7-year-old niece drew a polar bear.

The men scramble and Fitzjames manages to chase our Arctic friend off with a rocket, but not before he* catches up with Mr. Collins and seems to suck out his soul? I mean, he totally kills him, too, but the soul-sucking seems new.

In all the chaos, Hickey and his merry band get away. And they’ve got Goodsir with them. Nooooooo!

8.5/10 – While it may seem like good news that the expedition is now rid of Hickey and his sympathizers, that also means that they’re still out there somewhere. However, so is Tuunbaq. So as we get closer to the end, it’ll be interesting to see which one winds up being the bigger threat. (It’s Tuunbaq. Like, he’s obviously way less fragile than menfolk and he’s just as creative. But we’ll see.)

*Crozier has decided that Tuunbaq is a he. He’s the captain, so his word goes.