The Terror S01E07 Review: Horrible from Supper – A mutiny is brewing

As we get closer to the end of the season, I feel like I should have a text macro I can use for my reviews, saying something like, “Things are bad now and they’re only going to get worse.”

On that note: In the aftermath of the fire, the men of the Franklin expedition get ready for their long walk. Crozier makes a note in Terror’s log: “Captain Crozier gives the order to abandon ships.” It’s April 22, 1848.

Hauling the small boats filled with supplies over land would be hard work any day, but rampant lead poisoning makes it worse. Of course, physical ailments aren’t the only trouble they’re having. I mentioned last week that a man had complained to Dr. Stanley about the mental issues that were threatening to pull him under. I neglected to mention that that was Mr. Collins (Trystan Gravelle), who hasn’t been right since he was sent underwater to free ice from Erebus’s propeller.

This week, he’s confessing to Goodsir that during the fire, those bad thoughts turned even darker. To wit, the smell of the burning men made him hungry. Intellectually, he knows it’s wrong, but as the title of the episode says, his empty stomach didn’t know “horrible from supper.” 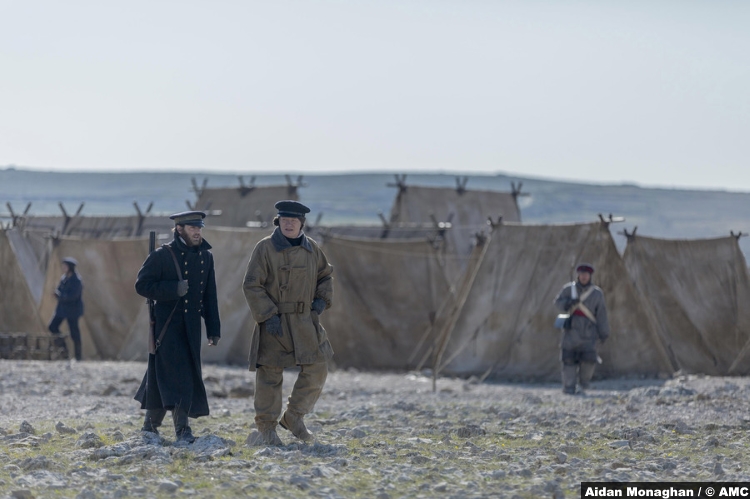 By that point, the men have made camp at King William Island and only a few of them, like Crozier and Fitzjames, know the awful truth about the advance party that left earlier in the season. Those men made it only 18 miles before something befell them that took off all their heads and arranged them in a neat line. Tuunbaq, you rascal.

Mr. Collins, of course, is not the only one who’s suffering. During the night, Mr. Morfin is in agony, begging for someone to put him out of it. He manages to get ahold of a gun, so I don’t know why he doesn’t do it himself. Instead, he’s put down by a soldier, one of the few in this expedition who’s regularly armed.

Goodsir, who’d been trying to negotiate with Morfin, offering him “wine of coca”–literally, cocaine in a wine suspension–is bereft by the death. In his tent, he sobs violently while Lady Silence joins him and tries to comfort him. Her hair is black again, by the way.

He’s already upset about the whole food issue. He’s tried pleading with Crozier to rely less on the canned provisions and more on hunting, but Crozier gently explains that there’s not much they can hunt. It takes time, for example, to learn how to hunt seal. 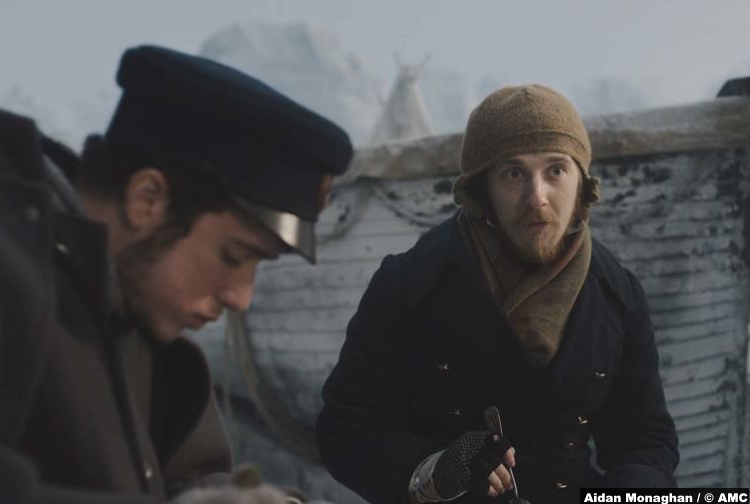 And as Hickey and some other leaning-toward-mutinous fellows discuss, the amount of game they’d need to feed everyone is staggering. So, Hickey’s gone and killed Erebus’s ship dog, Neptune. He claims the very good boy broke his leg, but Hickey is a damn liar and I don’t have enough space for what I hope Tuunbaq does to him. I hope it’s artistic.

So that’s Jacko sacrificed for science and Neptune murdered by Hickey. There’s no word on the nameless Erebus cat, but judging by what I know of cats–I have an 18yo one–it’s probably living with a Netsilik family by now, all, *takes a drag on cigarette* “John Franklin? I haven’t heard that name in years.”

Hickey’s crimes will only get worse, though. Crozier sends out a few parties to scout for food, including one headed by Lt. John Irving (Ronan Raftery), who has the misfortune of shepherding Hickey. As they’re out and about, they spy an Inuit family. Irving approaches them gently and explains that they’re looking for food while pantomiming eating. One of the men in the group gives him some seal meat, which he eats. In return, Irving gives them his telescope. 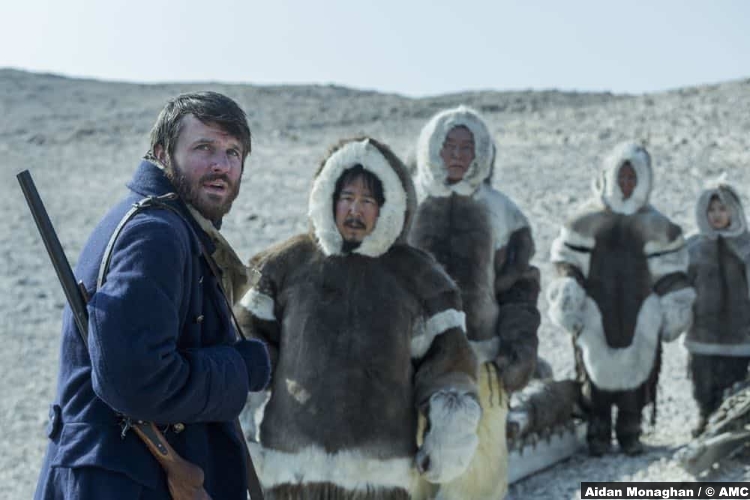 He comes back to where he’s left his group, delighted to tell them about the food. Instead, he finds that the rest of the group has been slaughtered by Hickey, who kills him, too. And I have two horrible thoughts in succession: he’s going to blame it on the natives and then, he’s going to kill them, too.

While I’m reeling from that, we learn something that comes as a surprise, but in retrospect, feels as true as anything we’ve learned so far. The man we know as Cornelius Hickey is a fraud. Cornelius Hickey was another man who was supposed to be a caulker upon Terror. This person took his identity. But while we may not know this man’s real name, we definitely know who he really is. He’s a mass murderer with plans of mutiny and he’s headed back to camp.

Things are bad now and they’re only going to get worse.

8/10 – Despite the fact that he’s awful and I wouldn’t mind seeing him catapulted into space, Hickey is the most compelling kind of character. You don’t know what he’s going to do next, but you know it’s going to be horrid and that you can’t help but watch. Of course, despite their false sense of comfort, we know there’s something much worse lurking around the edges of Terror Camp. And I have a feeling that it’s going to be making another appearance very soon.