If you’ll recall–it’s been a minute since season 1–we ended last time with poor Holden in the throes of something awful–what turned out to be a panic attack. Season 2 begins pretty much immediately where we left off, so things obviously haven’t gotten much better. 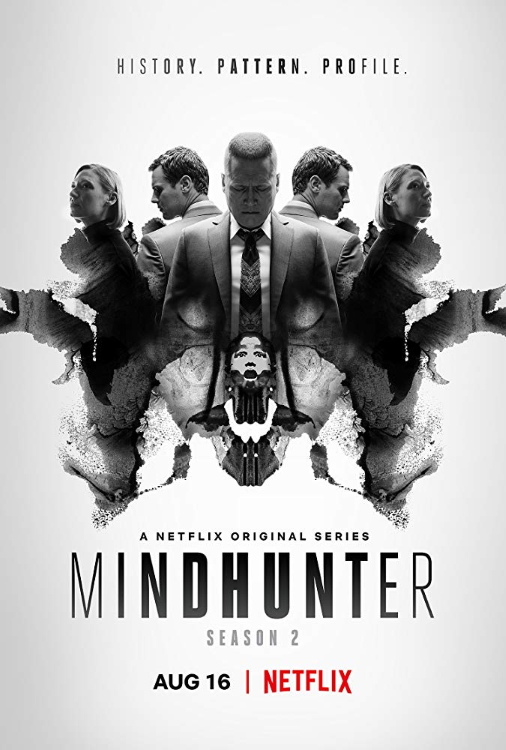 First of all, in the wake of the OPR mess, Holden’s disappearing act is a big problem. Or at least, it could be. The show dispatches it pretty quickly, along with Assistant Director Shepard (Cotter Smith). By that point, Holden’s already back, having been retrieved from the hospital by Bill. Holden gives a speech at Shepard’s farewell party that comes off, at first, like a typically awkward Holden speech. Then Shepard lays into him in private. He asks if Holden is “…truly oblivious to the wreckage [he leaves] in his wake.” Shepard then leaves, along with the panic storyline pretty much, but this comment will linger over the rest of the season.

The new assistant director, Ted Gunn (Michael Cerveris–yes, we have a Fringe reunion!), asks Bill and Wendy to watch over Holden. At the same time, he seems to encourage all of Holden’s (worst?) impulses. For instance, he asks Holden who his dream interview is–Manson, natch–then promises to make it happen. I’m very suspicious of his motives, even if he seems enthusiastic about their work. 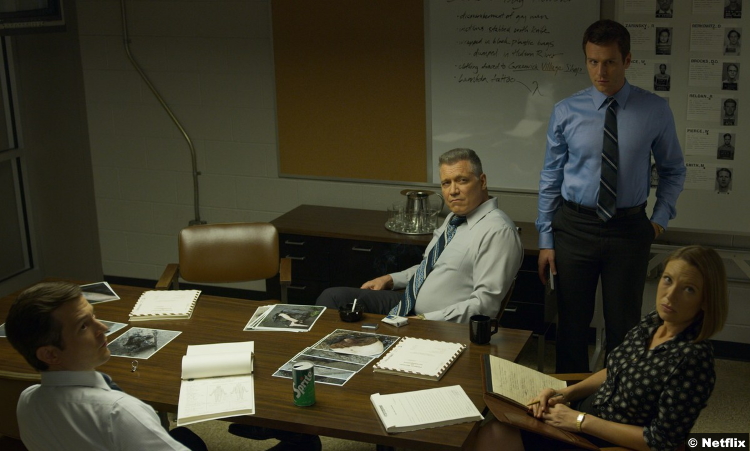 The immediate result, though, is that the BSU is given much more space and support than they’ve previously had. And they need it, as their purview is growing. As I mentioned last time, we saw glimpses of a serial killer in season 1 who wouldn’t be caught for another 20 or so years. We continue seeing him (Sonny Valicenti) this season–in fact, it’s a scene with him that kicks off episode 1–and although he’s never explicitly named*, it’s pretty clear it’s Dennis Rader, aka BTK.

No one knows that yet, of course–that BTK is a guy named Dennis Rader–so Bill heads out to Kansas to consult on the case. What he finds is, in a word, misery. One of the most electrifying scenes this season finds Bill interviewing Kevin Bright (Andrew Yackel), BTK’s only survivor. Bright can’t bear to be looked at, so he sits in the backseat while Bill and the local detective Drowatzky (Jeb Dreager) sit in the front. He unspools his tale in fits and starts, which doesn’t stem the horror.** I was reminded of my favorite passage in Michelle McNamara’s book about the Golden State Killer, I’ll Be Gone in the Dark:

If you commit murder and then vanish, what you leave behind isn’t just pain but absence, a supreme blankness that triumphs over everything else. The unidentified murderer is always twisting a doorknob behind a door that never opens. But his power evaporates the moment we know him. We learn his banal secrets. We watch as he’s led, shackled and sweaty, into a brightly lit courtroom as someone seated several feet higher peers down unsmiling, raps a gavel, and speaks, at long last, every syllable of his birth name

Bill can’t help Kevin right now, but he does learn a few things in Kansas, like that BTK idolizes famous killers. One of them he mentions specifically is David Berkowitz, aka the Son of Sam. So Holden and Bill go to talk to him. Like Kemper, Berkowitz (Oliver Cooper) is one of their more cogent interviews. Holden is able to break through his story–that he was given orders to kill by his neighbor’s dog–in a way that seems to help him regain his confidence.

And that’s a good thing, because the interviews are, after all, the main source for their work. On that note, I thought it was a smart decision this season to have Wendy and Gregg (Joe Tuttle) conduct some of the interviews. Gregg is a little stiff at it, but Wendy’s a natural, and we feel our frustration when Gunn wants her to concentrate more on her academic work. Leave the interviews to the big boys, Wendy! Yeah, okay.

But speaking of big boys, there’s no bigger fish this season, of course, than Manson. Whether it was intentional or not, having Damon Herriman play him after he played a younger version in Once Upon a Time in Hollywood is brilliant. We can see the sea change in him by this point. As for his performance in general, Herriman sounds more like Dewey Crowe (his character on Justified), but he’s got the Manson vibe down. Watching Bill spar with him is another highlight of the season. 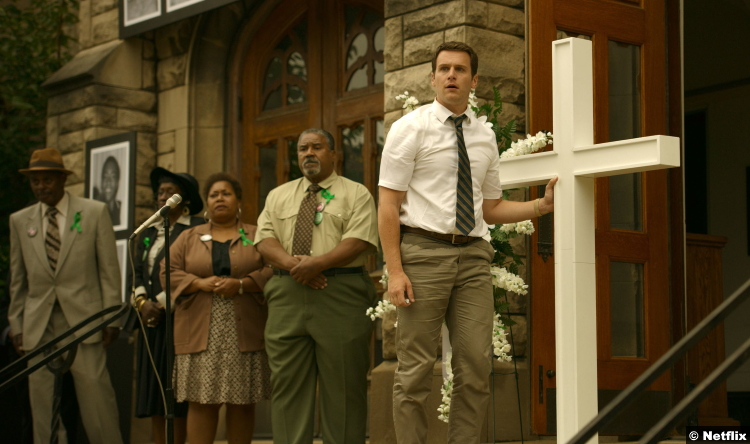 Bill, of course, is simultaneously dealing with problems at home, which partly explains his prickliness with Manson. It also explains why Holden is mostly left to his own devices on a trip to Atlanta. He’s assisted–or saved, rather–in his inmate interviews by Atlanta field agent Jim Barney (Albert Jones), whom we met last season.

He’s also still in Atlanta when he gets ready for what he thinks is a date. But the hotel desk clerk, Tanya (Sierra McClain), hasn’t asked him out. She’s trying to tell him what’s happening in Atlanta. And what’s happening is that someone is murdering children.

Holden’s doggedness will end up focusing the FBI in that direction, but make no mistake–it’s the mothers got it all rolling. They advocated for their children when no one else would. Holden obviously cares, but on some level, you can’t help but think it’s also an experiment for him–a chance to put profiling into practice again.

9/10 – I didn’t get a chance to mention it in the review, but as one of my complaints about last season was that she was a little underwritten, I’m so glad we spent more time with Wendy this season. I felt like I knew more about who she is this time. My biggest complaint this time is that while Holden’s anxiety was handled well initially, I was disappointed that it was all but dropped after that. One more minor complaint: Wendy’s makeup, my God. Call Coldplay, because it was all yellow.

But now that I’ve gotten that out of the way, this was a great season. The performances across the board were incredible. Beyond the main cast, I’m sure people will be talking about the Manson interview, but all of the killer actors (pun intended) were wonderful. And I really liked how Bill’s family stuff was integrated into and mirrored the FBI storylines.

*American broadcasting, or at least the captioning, identifies him as “ADT serviceman,” a real job he had. I know in Germany, at least, they just straight-up label him Dennis Rader.