REVIEW: Overlord is a solid mash-up of interesting ideas

First thing’s first: Overlord is not the next installment in the Cloverfield anthology. The JJ Abrams’ produced series of loosely-connected sci-fi/horror films will remain at three-movies deep for a little while longer. The first film was a fine bit of found footage thrills. The next was a stellar surprise of claustrophobic terror. Then came number three, the disastrously poor The Cloverfield Paradox. That movie dropped directly to Netflix on SuperBowl Sunday, in a shrewd bit of marketing. The movie was an instant-watch for many (if “instant” means “after the game”) but was also promptly excoriated. But it’s okay; everyone was waiting for the other Cloverfield movie that was supposed to come out this fall. 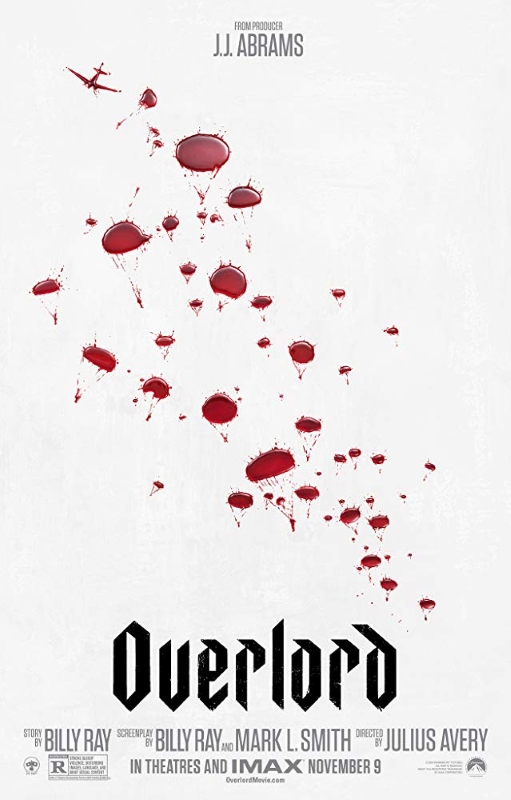 But it ain’t Cloverfield.

It’s possible this movie was never going to be the next installment in the anthology and that news on that account was incorrect. It’s also possible that, after the horrid reception of Cloverfield Paradox that the makers of this movie decided to distance themselves from the franchise. It could also be, along those lines, that everyone involved here thought this movie was good enough it didn’t need the extra buzz (and potential polarizing reactions) that comes with the JJ Abrams franchise.

So if it’s not Cloverfield, what is it? 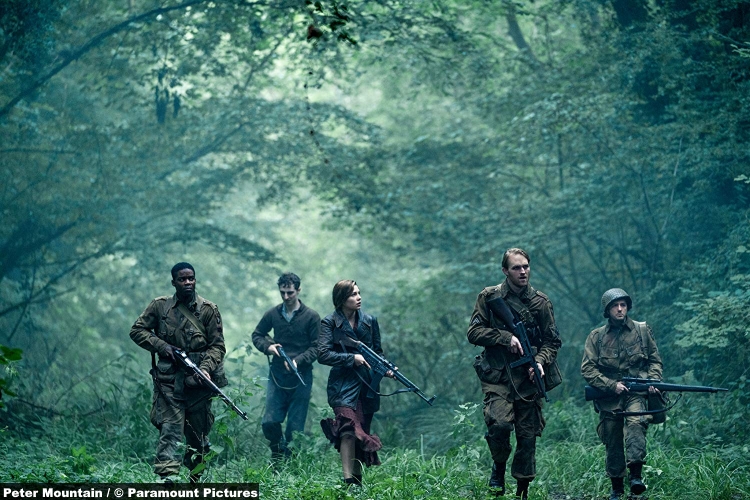 I think by now, everyone knows that video game adaptations are almost always guaranteed to flop. Even on the rare bird occasion that an adaptation is good enough, the movie is often an under-performer in the box office. The most recent Tomb Raider movie basically broke even despite good online buzz and average reviews. And “average” is a lot better than most video game adaptations receive from critics: Assassins Creed was putrid. Prince of Persia was a waste. The Resident Evil movies basically aren’t even Resident Evil movies; they’re just zombie apocalypse films with a few name-drops for fun.

Video game adaptations usually fail because to do them “right” (that is, faithfully) you have to include so many video game tropes that the movie stops being a normal movie. What does work are the movies that remind you of video games without all the baggage that comes with specific adaptations. Kubo and the Two Strings was basically a JRPG on film. It was a better JRPG adaptation than the actual Final Fantasy movie was.

A Wolfeinstein movie really wouldn’t work. There’d be too much baggage. Overlord, however, does everything you’d want in a WWII Zombie movie while reminding you of how things would go if you played that premise in a video game: You have the cliche’d interactions on the plane before everything goes crazy. You have the stealth mission, the shooting mission, the mini boss fight, the escape sequence, the boss fight. As a mimicker of  Wolfenstein, it hits all the right notes: Nazi killing, some banter between soldiers, and “crazy wild silly” sci-fi experiments done by hammy villains. All it lacks is the name. As a result, the movie is able to be its own thing with no expectations or boxes needing to be checked…

And it ends up not sucking like a video game adaptation almost certainly would. 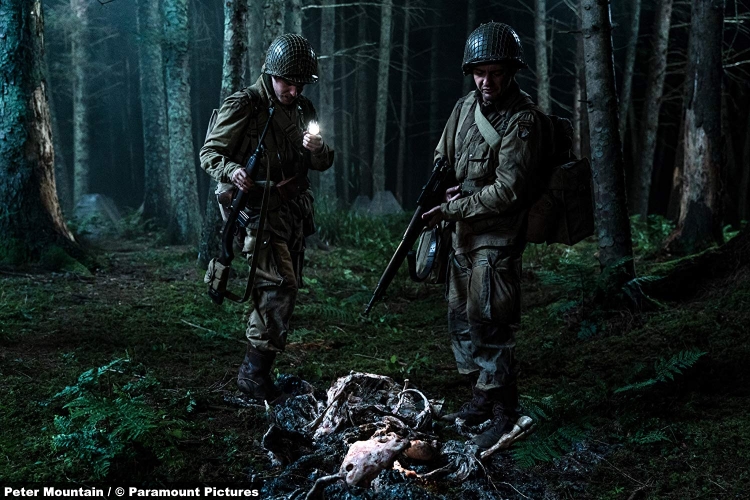 All that said, Overlord is not a perfect movie, and my biggest complaint is only half of one: There’s basically a whole movie (or maybe just a much larger second act) that was seemingly left on the cutting room floor, that would have focused on all that body horror stuff that is only teased in the film. The premise is basic: Specialists in advance of the D-Day landing (code-named: Overlord) parachute into France to take out a radio tower built into an old church. What they discover is a host of Nazi human experiments. The initial trailer really hammered home the “WWII vs Zombies” theme but the end result is so dramatically cut-down you barely have time to appreciate anything before we move on to the next scene and (quickly) the ending. 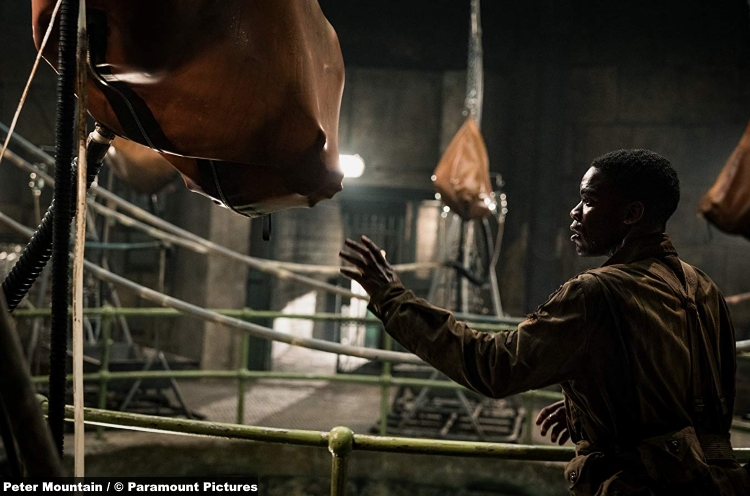 That being said, while I could have done with more zombies and maybe more horror stuff in the under-church lab, I can’t really begrudge a movie for its “get in, get wild, get out” mentality; it was brisk and brief and in an era of action movies stretching to 2.5 hours these days, I appreciate a sub-two hour movie that knows better than to risk overstaying its welcome. 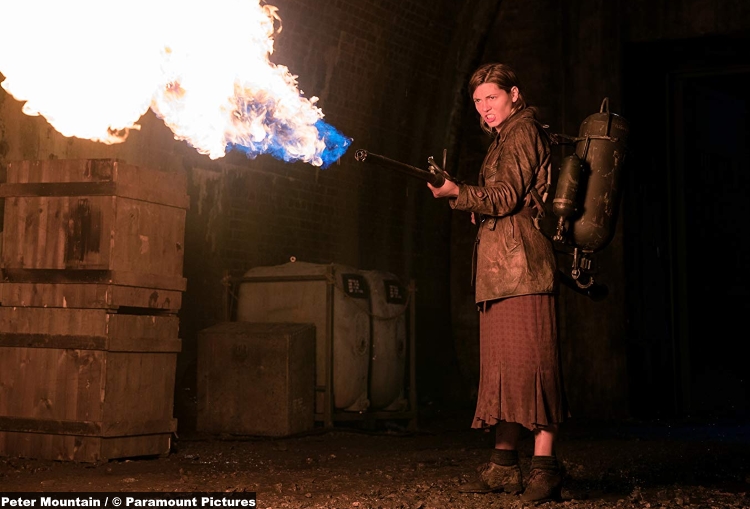 The mash-up of styles (gritty WWII and crazy sci-fi) could have been more explored but the cuts made the movie flow at a good enough pace so that you don’t mind the mostly thin characters or the lack of any explanation for where the zombie serum came from (the SS final boss seemed to hint that it was “always flowing under France” or something? Again, it feels like that explanation was cut). If you’re in the mood for R-rated zombie gore and good old fashion fascist killing, you could do a lot worse. If you always wanted to see B.J. Blazkowicz on the big screen…this is probably the closest “best” thing you’re going to get.