Assassins Creed is exactly the opposite of what it should have been.

Has there ever been a good video game adaptation?

Are we really living in a world where the best “video game movie” was the first Mortal Kombat film? Wreck-it-Ralph doesn’t count, since it was an original story. There was that Angelina Jolie Tomb Raider movie from 2001 that was good enough not to be embarrassing. There was an okay Silent Hill movie that never quite reached its potential. Of course, Resident Evil has been the biggest and most successful, but other than a few elements, the movie series barely resembles the game franchise at all.

Mortal Kombat did it right. It took the elements of the game that they could adapt (the zany characters, emphasis on Japanese lore and martial arts) and created a very thin plot around it. It was stupid, but unlike Tomb Raider, it was stupid and fun. Honorable mention in that regard goes to the Jean Claude Van Damme Street Fighter movie, which was also stupid and fun and took just the right parts of the source material and worked outward.

How weird that the two most enjoyable (in an ironic way) video game movies are based on fighting games, whose plots and stories are, by nature, more dispensable than a napkin at McDonalds. The games that have big, cinematic plots, and which try to make the player feel like he’s in an interactive movie, are the games that end up being the worst actual movies. Why? Could it be that, because everything is relative, we can appreciate a stupid plot in a video game but would criticize the same plot in a movie since we hold movies to higher standards?

At least we usually do.

One thing you can say for the Mortal Kombat and Street Fighter movies, they didn’t have “INSERT COIN” flashing on the screen, or pictures of giant maps with character heads on it, indicating who was about to fight next. In other words, they adapted the games, but didn’t adapt the stuff no one cared about. 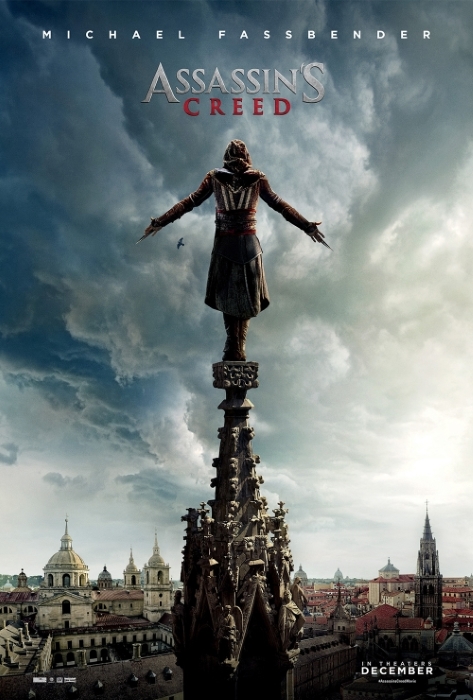 If you’re not familiar with the video game series, the simplest way of explaining it is: You play as an assassin, in different points of history, fighting to thwart the plot of the Knights Templar, a secret organization whose goal is to Take Over The World. There’s also a side-story set in the present-day which features something called an “Animus” which is a high tech computer simulation device that is technically what allows you to play as the assassin (who is your ancestor). You see, you aren’t actually playing as an assassin; you are reliving history. So, in the game, if you die, you’re not actually dying, it’s that the Animus shuts down because “you getting stabbed right there didn’t happen in history” so you have to start over and try again. When you try to veer away from your designated area, you are restricted because “that’s not where your ancestor assassin went, etc. It’s supposed to be a clever way of acknowledging the limitations of video games but really it’s more of an annoyance than anything. And the times you’re forced to run around and “play” in the modern era is even worse. No Assassins Creed player looks forward to the stuff set in the present day. All we want is to hop rooftops and stab people as a hooded hero.

So guess which part of the game the movie focuses on!

This abomination of a film spends maybe thirty (at MOST) minutes in ancient Spain (1492 to be precise). The whole rest of the time is spent following the assassin’s descendant (both characters are played by Michael Fassbender) as he is held in a prison-like research facility in modern day Spain. His Spanish-accented guide through the world of the Animus and her British-accented father (I know there is no such thing as a “British” accent, but go with it) work behind the scenes as modern day Templars, hoping to use Fassbender’s memory to locate some thing which will help them Take Over The World.Those 1492 scenes had potential to be good, but the rest of the movie is a mess and really drags it all down.

The movie fails on two fronts.

As a video game adaptation, the movie focuses on all the wrong things. As said, no one cares about the modern day, but that’s where the movie butters its bread. As a straight movie, the film fails by being poorly edited and poorly explained, with terrible dialogue and boring characters who you’ll neither root for or against. 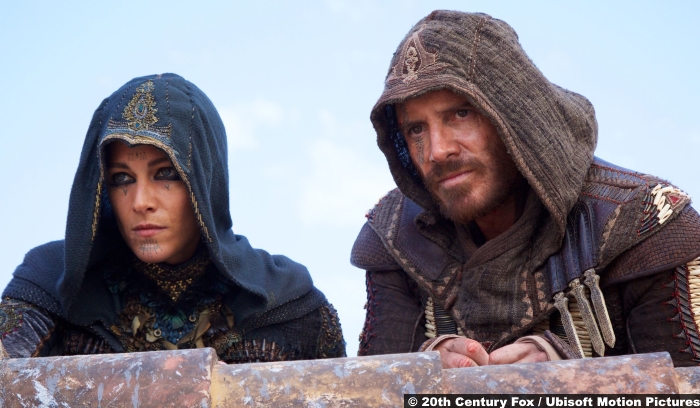 Let’s start with the beginning, of which there were four.

The movie opens with an info dump of text in front of a black background. Right there we have a red flag: Any movie that feels the need to give the audience an initial paragraph of info is clearly a movie not confident in its ability to tell its story.

From there we move to the second beginning, which depicts a ceremony of the assassins in 1492 Spain. This introduces us to the aesthetic of that time period (robes, dirty faces, and lots of yellow and brown). 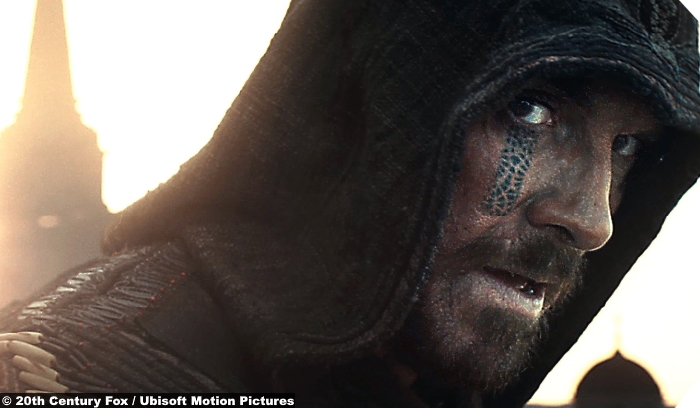 From there we move to the third beginning, which depicts Michael Fassbender’s character as a child, who stumbles upon his mother being murdered by his father. His mother has a necklace that, I’m just going to tell you, implies she was a Templar and therefore a Bad Guy. I have to tell you this because the movie doesn’t even try.

From there we move to the fourth beginning, where Fassbender’s adult character is being put to death by lethal injection.

Somehow he escapes, presumably because the people who rescue him switched out the Sodium Thiopental with a placebo designed to fool everyone else into thinking they’d killed him. Fassbender’s character—whose name I do not recall nor do I care to—wakes up in Spain at the Abstergo research facility to have his DNA “unlocked” (or something*) so the memories of his ancestors can be experienced in the virtual reality environment of the Animus.

*That’s not how memory works, but whatever.

Finally, after all that, we get our first experience (not counting the one minute teaser at the “beginning” of the movie) of life as an assassin in the past. It lasts only a couple minutes (and is frequently interrupted by quick shots of Fassbender miming the actions of his ancestor) before we’re jolted back to the present day to listen to more jibber jabber about The Plot To Take Over The World. Shadowy organizations have never been so boring. We will return to ancient Spain only two more times, each one a little better than the previous and each one ending too soon in order to return us to boardroom discussions and office talks about getting the whatchamacallet in order to do the whatever so that they can Take Over The World. 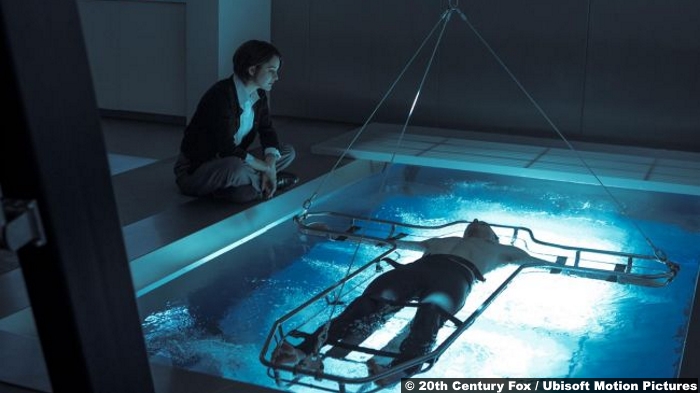 I actually had high hopes for this movie, based solely on two things: A stellar cast and the fact that the source material had great potential for Hollywood. But after the reviews started coming in I sat down expecting a trainwreck. Alas, it was worse than a trainwreck. Trainwrecks are occasionally exciting. This movie was too boring, too serious, too insultingly self-important.

But unlike some video game movies which seemed destined to fail because there just isn’t anything to work with, there was great opportunity here to turn this into a solid film franchise.

You know what would have worked? An anthology series of period piece movies that was a cross between Indiana Jones and Mission:Impossible. Forget the Animus stuff and the modern day storyline. Non-gamers don’t understand it (and the movie did a wretched job trying to explain it) and gamers hate that part of the series anyway. Ditch it and just do a movie about an assassin trying to thwart a Templar plot. Then in the next one change time and location, keep Fassbender in the lead (the change in time would be enough to show that we’re watching his ancestor or descendant in each movie) and do a new plot that features equal parts stealth and swashbuckling adventure.

They had a multi-film franchise in their hands and—despite the promise of more films to come—they blew it because they did the exact opposite of what they should have. They made a movie marketed as a “period adventure film” that had too little “period” and no “adventure.” There was no fun to be had, no thrills to be enjoyed, no heart to be felt. Even now, a day after seeing it, I am stunned over how joyless the whole film was.

3/10 – The 1492 scenes had potential, but the rest of the movie was just long, pretentious, and pointless.