Watching Kubo as he journeyed through caverns and fields, vast oceans and graveyard-towns, I couldn’t help but think of The Legend of Zelda. Nintendo has said many times that they have no interest in trying to adapt their exploration/adventure series to a feature length film, but if ever there was a film to give them the inspiration and the confidence that it could be done (without turning into a fiasco like the Super Mario Bros. movie was), this movie was it. And if there is a company skilled enough to do it, Laika is it.

Despite having only a few films under their belt (including Coraline and ParaNorman), Laika has proven themselves to be a company that puts story and emotion above all else. Other studios have tried to rise to the level of Pixar, but none have been able to match the depth that Disney’s computer animated masters bring to the table with (almost) every film. Dreamworks’ animated movies tend to be on the shallow side. Sony’s animated output is cheap and pandering. Fox produces exactly the kind of animated films you’d expect Fox to produce. Laika, meanwhile, is quickly rising to be the true challenger to Pixar’s throne.

With Kubo and the Two Strings, Laika has crafted (somewhat literally), not only the best animated film of the year, but also one of the best movies released at all in 2016, whatever the format (animation is a style, not a genre). 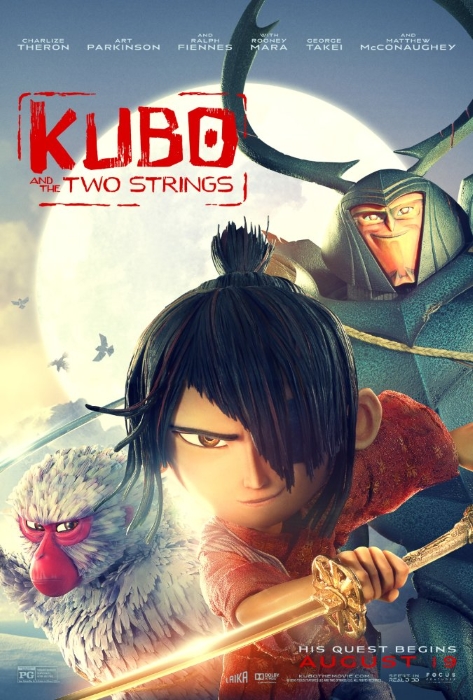 As mentioned, there is a very “video game” structure / progression to the basic plot of the film, but the real movie is what’s going on underneath. The surface happenings have everything a kid could want in a movie: There’s stunning scenery to hold the attention, memorable action sequences, including a very video game boss-like fight with a giant skeleton, and a thrilling blade-on-blade fight…in the rain…on a boat…between a magical monkey and a (nightmare-fuel) demon lady. On and on the set pieces and action scenes go and in between (and sometimes during) the dialogue is sharp, witty and occasionally hilarious. The acting feels like acting, which not every animated movie does well. These feel like real characters.

Perhaps because they are. Kubo is the product of five years of work, with multiple puppets and sets being painstakingly designed and animated via stop-motion photography.

Here is the aforementioned giant skeleton, just to give you an idea of the physical reality this movie playing with… 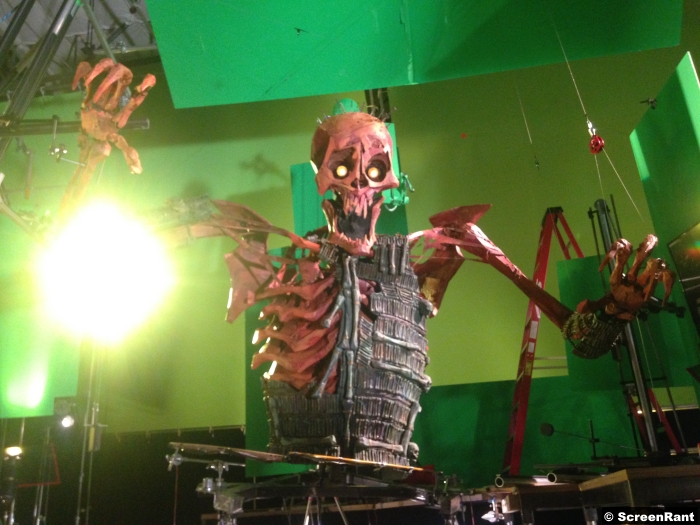 In the film, the skeleton monster is bathed in shadows, which is why it doesn’t need to be completed in the fully-lit picture above. The scale of the puppet is remarkable, and is one of the largest ever used in a stop-motion format. There is plenty of CG-animation to be found, but it blends seamlessly with the unique look and feel of hand-controlled animation. If you aren’t impressed with stop-motion you simply haven’t considered how laborious the craft is. Seeing it fully realized in this film was stunning. It’s true art.

But pretty pictures don’t matter much without a story worth caring about, and Kubo has it.

Director Travis Knight (son of Nike mogul, Phil Knight, who owns Laika studios) has allowed the action and adventure on the surface to compliment the heart and warmth of the real story underneath. Kubo is not about battling monsters. It’s not about fighting for survival from an old foe that’s hunting you. It’s not about an epic journey to collect magical artifacts. That’s a giant red herring for the characters, and window dressing to keep the viewers engaged as we get to know the main characters.

What Kubo is really about is family.

Throughout the film, the title character wields a magical…lute? It’s guitar-like, let’s leave it at that. Its magical properties allow it to control, among other things, paper and other similar (flat) objects. Kubo can bend and create origami-like objects that obey his commands. A bird here and there is impressive, but the biggest moment comes when he uses his power to create a giant ship out of autumn-tinted leaves. The animation is gorgeous here (as is the music, which is strong throughout the film) as the leaves float across the screen looking…well, real.

Watch the (spoiler-free) clip below:

How Kubo wields his power, where it originates, what its limitations are and so many other questions are left unanswered. But it’s magic; does magic need an explanation? This isn’t science fiction, it’s pure fantasy. He controls things because his magic banjo lets him. That’s good enough for me.

Throughout the movie I kept wondering about the meaning of the title: Kubo and the two strings. It is noticeable early on that his magical instrument actually has three. Where the “two” strings come from, how they are used, and what relevance they have to the real crux of the movie (family) is handled in the climactic final battle. The scene could have easily been ruined by “telling” not “showing” but Knight trusts his audience will be paying attention and will grasp the symbolism.

If there is a complaint to be found, it’s that the movie doesn’t explain enough. One important character has a condition that seems to put her in a coma in the daytime while becoming lucid during the night. Another character spends the film as one (powerful) thing and then at the end he’s transformed (back?) into something else that’s not powerful at all. In fact that transformation and the questions it raises about what happened to him and when, leads to more questions raised about two other villains.

Those questions go unanswered and while they don’t break the plot, they will nag your brain…but probably not until you’re already home; the movie is engaging enough while it’s going that you won’t allow yourself the time to say “wait, what…” 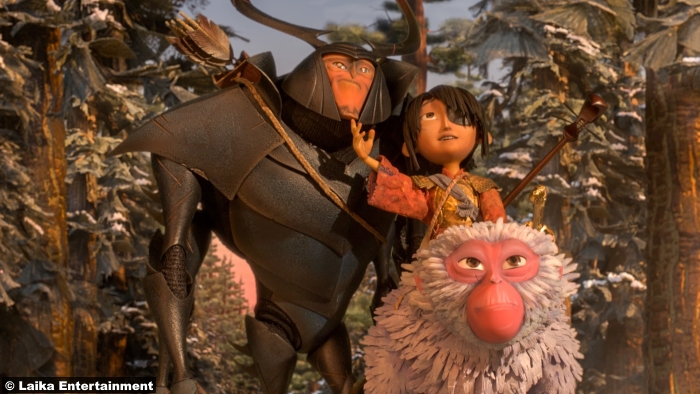 9/10 – Full of warmth and depth that adults will enjoy, as well as humor and adventure that kids will love, Kubo and the Two Strings is a stunning film that must be seen.

See it at the cinema.