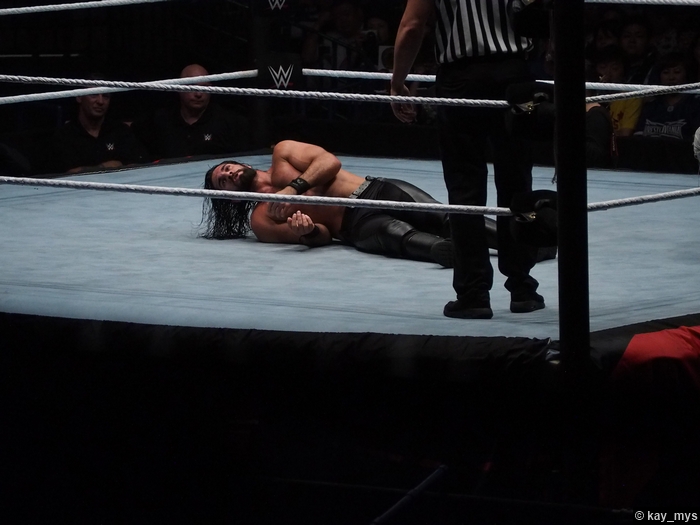 For the tenth year in a row, WWE would be taken to the extreme as the 10th annual WWE Extreme Rules came to you, live on the WWE Network, from the PPG Paints Arena in Pittsburgh, PA. In what started as a rivalry over who could dethrone Universal Champion Brock Lesnar has turned into a personal feud over dominance and bragging rights on Monday nights between Roman Reigns and Bobby Lashley. For the past month, Roman Reigns has been clamoring for another match with Brock Lesnar for the Universal Title but Bobby Lashley had heard enough of “The Big Dog” claiming that he is the uncrowned champion, saying that Reigns has failed to beat Brock on multiple occasions and that the Universal Champion is looking for a real challenge, telling Roman to “move on”. Roman would respond by bringing up Lashley’s exit from WWE ten years ago, mocking Lashley’s attempt at a lucrative MMA career. Now, at Extreme Rules, the talking would come to and as Roman Reigns and Bobby Lashley would go one-on-one for the first time ever. Which one of these two powerhouses will emerge victorious and will a victory bring that Superstar one step closer to a match with Brock Lesnar for the Universal Title?

The WWE Championship would be up for grabs at Extreme Rules as, after winning a Gauntlet Match to earn the opportunity, “The Lion of Bulgaria” Rusev would get his first ever one-on-one WWE Title match when he challenges AJ Styles for the most prestigious title in WWE! For over eight months, AJ Styles has solidified SmackDown LIVE as “the house that AJ Styles built” with successful title defenses over the likes of John Cena, Dolph Ziggler, Kevin Owens, Sami Zayn, and, most recently, Shinsuke Nakamura. However, Styles has never put the title on the line against Rusev and “The Lion of Bulgaria” has been on a roll over the last few weeks. Can Rusev make it the biggest Rusev Day of all time by winning the WWE Championship or will AJ Styles reinforce the “house” that he has built?

In one of the most shocking title changes in recent memory, Dolph Ziggler would answer Seth Rollins’ open challenge for an Intercontinental Title match the night after Money-in-the-Bank and, with a handful of tights, “The Show Off” was able to upset Seth Rollins by claiming his sixth Intercontinental Championship! This would be followed up with a stellar rematch between the two show-stealers but that rematch would end inconclusively thanks to interference from Dolph’s tag team partner Drew McIntyre. Now, at Extreme Rules, these two Superstars will clash one more time but, this time, it will be in a 30-Minute Iron Man Match, where the Superstar to earn the most falls in the thirty minute time limit would win the match! Can Seth Rollins go the distance to reclaim the Intercontinental Championship or will Dolph Ziggler prove that he’s every bit as good as he says he is by surviving the thirty minutes and walking out as the champion?

Ever since Money-in-the-Bank, Kevin Owens has found himself on the receiving end of some harsh bullying by “Mr. Monster-in-the-Bank” Braun Strowman as Braun has flipped over Kevin Owens’ car as well as sending Owens careening off of the stage in a porta potty. However, Kevin Owens has gotten no sympathy from RAW General Manager Kurt Angle and, at Extreme Rules, Kevin Owens would have to step inside the unforgiving Steel Cage to go one-on-one with Braun Strowman!

In a surreal moment that no one could have anticipated, one of the most popular tag teams in WWE reunited on SmackDown LIVE a few weeks ago as “The Big Red Machine” Kane would return to Tuesday nights to aid Daniel Bryan in Daniel’s uphill battle against The Bludgeon Brothers, reforming Team Hell No! Despite their ongoing issues over the years, there is no arguing the success of Team Hell No in WWE and Daniel & Kane will be looking to bring that success to Pittsburgh as Team Hell No would challenge The Bludgeon Brothers for the SmackDown Tag Team Titles at Extreme Rules.

Over the years, few Superstars can lay claim to being as unique and enigmatic as Jeff Hardy but one Superstar who may have Jeff beat on bizarre behavior is Shinsuke Nakamura. Fresh off of his unsuccessful pursuit of the WWE Championship, “The King of Strong Style” would set his sights on another prestigious championship as Shinsuke Nakamura would challenge Jeff Hardy for the United States Championship.

In a rivalry that has been going on since before WrestleMania, former best friends Alexa Bliss and Nia Jax have repeatedly found themselves at odds with each other and, just when it seemed like Nia had put Alexa in the past, “The Goddess” would pop up at the worst possible time at Money-in-the-Bank. In the middle of the RAW Women’s Title match between Nia Jax and Ronda Rousey, Alexa Bliss would get involved, using the Money-in-the-Bank briefcase she won earlier in the night to take out both Ronda Rousey and Nia Jax before cashing in her Money-in-the-Bank contract on Nia, ultimately defeating Nia to become the new RAW Women’s Champion. Now, at Extreme Rules, Alexa Bliss will have to deal with the consequences of her actions as “The Goddess” would defend the RAW Women’s Title against former champion Nia Jax in an Extreme Rules Match, where there are no disqualifications and no count-outs! Not only that, but the suspended “Rowdy” Ronda Rousey has vowed to be in the front row for the match. Can Alexa Bliss get past Nia Jax in an Extreme Rules Match as well as steer clear of Ronda Rousey to walk out as RAW Women’s Champion?

Having taken to mocking Matt Hardy & Bray Wyatt in recent weeks, there is no denying that The B-Team has been on a roll since splitting from The Miz and The B-Team will have the opportunity to prove that they are A players when they challenge Matt & Bray for the RAW Tag Team Titles. Also at Extreme Rules, Finn Balor would be looking to prove to Constable Baron Corbin that size doesn’t matter when Finn goes one-on-one with the Constable.