Your SO OF COURSE preview of WWE Royal Rumble 2018

Last time on SO OF COURSE it was TLC, the annual December snoozer for the seventeen fans still watching the product in December. It’s January now though, which means things matter again! It’s time to start paying attention because the most action-packed, plot-twisty three months of the year are about to begin. And we have all the preview and predictions you need to see just how exciting it all is and just how many different ways Vince can screw it up! Consider this your SO OF COURSE preview of WWE ROYAL KICKING OFF OF OPERATION GET ROMAN REIGNS OVER AS A MAIN-EVENTER VERSION THREE POINT OH RUMBLE OF 2018! 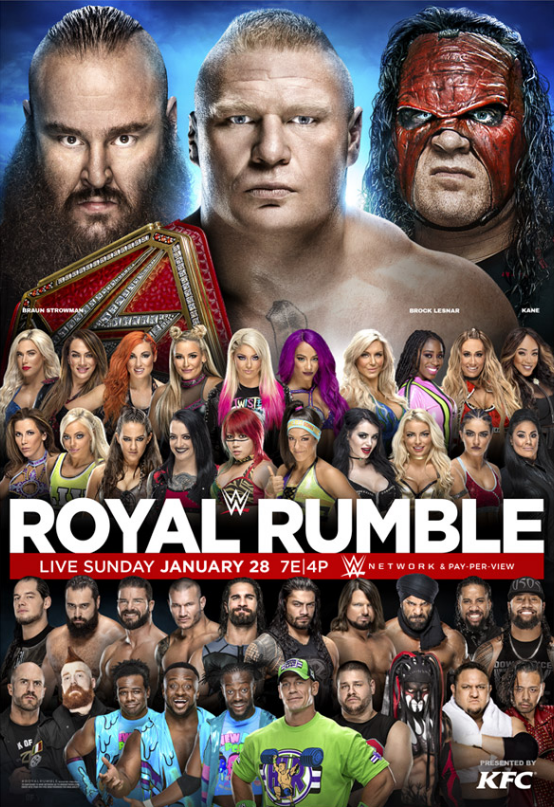 If you’re just joining WWE after a long hiatus you may be interested to know there are no longer “divas” but instead the company features two divisions of “women’s wrestlers.” This change in company branding is—

…no Stephanie. No one called for you.

The change in the company’s philosophy regarding women’s wrestling is due in large part to NXT and the athletic, story-first/bewbs-second booking around superstars like Emma, Paige, Charlotte, Sasha Banks, Becky Lynch and Bayley. Those women ushered in a revolution with matches that frequently stole the show and outperformed their male counterparts. WWE recognized the opportunity to shift away from “divas matches” (bathroom breaks, mostly) by brandishing a new—

Anyway, what started as an organic movement, nudged along by Triple H and the NXT bookers has become a fully-branded YES THIS IS WHERE YOU COME IN STEPHANIE BRAND part of the WWE. Women have main-evented the occasional Raw and Smackdown, they’ve main-evented a legit WWE PPV and now they’re getting their own Royal Rumble, with the winner earning a Women’s Title (either the Raw or Smackdown version) shot at WrestleMania.

Oh and there’s a guest-commentator too.

I forgot who, though.

Only about half of the thirty women have been announced so there’s plenty of room for returning legends and other surprises. The big rumor is of course Ronda Rousey and if you don’t think WWE’s Chief Brand Officer isn’t salivating at the prospect of getting a match with her at WrestleMania you’re crazy. So worst of the worst case scenarios: Stephanie leaves commentary late in the match, tosses Ronda over before getting tossed herself, then goes on to have a Mania match that not only overshadows the first women’s Rumble but the women’s title match on the biggest show of the year.

If you’re just tuning in you’re probably wondering what the heck is going on here. Let me summarize it quickly:

Seth Rollins and Dean Ambrose kissed and made up, teamed up for a cup of covfefe with Roman Reigns in a reunited Shield, then went off to win the Tag Titles. Then Dean got hurt (it was legit but I suspect Seth Rollins’ foul play because FOOL ME ONCE SETH, FOOL. ME. ONCE) and they decided to pair Seth—a guy who has struggled maintaining popularity as a solo-babyface and who was just starting to find his groove—with Jason Jordan, a guy so cold as ice he can’t even get over with a returning Kurt Angle giving him the rub.

It’s the ultimate in SO OF COURSEing.

They face Cesaro and Sheamus, a tag team that’s managed to suck together, be pretty entertaining together, and are just starting to round the corner back to sucking together. This might be the end of their partnership, or at least the beginning of the end. With Mania around the corner I would not be surprised to see a EUROPOWERS EXPLODE match on the big show. Losing to the Sad Trombones would be a great kickoff to it.

If you’ve been away, AJ Styles is the most popular babyface in WWE. He’s a two time world champ and one of the few to have beaten John Cena clean as a whistle in the past decade. He’s effortlessly likable, endlessly talented, and sporting a head of hair that would make supermodels blush. According to him he uses an over the counter brand too.

KO and Sami Zayn are doing remarkable work as a heel duo you hate but love, depending on who has the tag. They’ve coined a YEP movement along the way, and…lookit there’s no way to explain it. You just have to watch it. It’s also destined to end with a brutal beatdown from KO to Sami, but hopefully we get months if not years of these two tagging first. Let them be heels, let them turn face, let them be the best and then they can split and feud and “do this forever.”

If this is your first taste of WWE in six months or so, no you racist that is not Jason Jordan. That’s Shelton Benjamin. He’s back and though he’s lost a step from his 2006 days of getting his face kicked off by Shawn Michaels…

…he’s doing good work being the spotman for the one man wrestling machine that is Chad Gable. The diminutive, somehow dorkier than 2001-era Kurt Angle Kurt Angle is wrestling up a storm on SmackDown. Meanwhile the USOs are continuing their career resurgence as a couple of sass-talking heels. Everyone in this match is A++ at wrestling. And this is a two-out-of-three falls match. So basically, pop the popcorn everybody cause this one is going to be great.

Hi, welcome back to WWE. Here’s what’s happening in Raw’s main-event scene: It’s a match that should be WrestleMania’s main-event, but somehow with Kane also there. It’s the most dominant heel champ in maybe ever taking on the most over big man babyface in a generation.

This is the match you came back for, lapsed fan! It’s sixty minutes of entrance music, crowd reactions, lazy attempts to roll people over the top rope, sudden bursts of excitement, surprise returns, big debuts, Michael Cole blathering on and not letting moments just be, and one ultimate winner who goes on to main-event the middle of WrestleMania while Brock vs Roman closes the show!

Who should win? Nakamura winning and feuding with AJ Styles would be fun. AJ Styles losing the title and then winning the Rumble in the same night would be bananas. Finn Balor winning and jumping to SmackDown would be great. And then there are the several potential debuts that WWE has on the horizon, any one of which could be brought in and win the Rumble on his first night; what a splash that would be! There are a LOT of possibilities this year, and a lot of opportunities for an exciting and fan-pleasing finish.

no please don’t do this