Game of Thrones S07E02: Stormborn – Is the wheel already broken in Westeros?

Stormborn is one of those episodes of Game of Thrones where the complete insanity of the material is on display, or maybe that’s just me. Yet what other show could have me nearly crying at Arya’s almost reconciliation with a CGI wolf? What other show could go all Greyscale Anatomy then cut to a cream pie? What other show would have a character as ridiculous as Euron Greyjoy? I think it’s healthy to realise every once in a while, that Game of Thrones is completely out of its mind at times. Not all the time, but this episode was incredibly full on.

The reason for this, other than the fact that it is a fantasy show that is fully letting loose that part of itself, is that Westeros is in complete turmoil. There hasn’t been this much bother since The War of the Five Kings. Basically, the wheel is already broken. Cersei only actively rules about half of the Seven Kingdoms, Dany’s very presence in Westeros threatens all of it, and the North considers itself independent. It’s a bloody mess, and everyone seems to know this.

Stormborn is an episode with one thing mainly on its mind: sorting out all of the lies and betrayals in order to try and move forward: which is easier for some than it is for others. Let me paraphrase Kurt Russel’s character from Big Trouble in Little China by saying we open on Dragonstone on a dark and stormy night. This is the same type of weather in which Dany was born; is it a god omen or a bad omen? Who the hell knows but it causes Tyrion and Varys start to mythologise Dany while shes in the room. 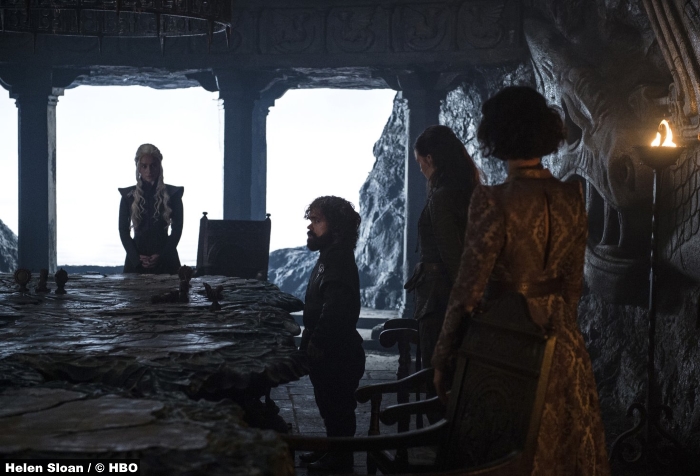 It’s this scene in which the aim for the episode is made crystal clear. Dany decides to finally take Varys to task for his lies and treachery over the years. Varys and Littlefinger are useful signifiers to what kind of world Westeros is. Littlefinger practices the same amount of espionage, bureaucracy, and fallacy, as Varys has but their end goals are different. Littlefinger does it all out of a chip on his shoulder, a selfish need to rule the Seven Kingdoms. Varys, on the other hand, is for the people of Westeros because he is them. What’s crucial here is that Varys’ hands are far from clean: he has served two opposing kings and plotted Dany’;s death in order to survive. He has switched his allegiances time and again. The only thing that saved his life in his conversation with Dany is that he owned all of his actions. He knows Dany’s power, that’s why he supports her, but even selfless action leads to blood in Westeros.

Dany herself is having a feeling of anti-climax. Not surprising due to how long she has wanted to come home. What is interesting here is that it doesn’t weaken her. Sure, she looks to Tyrion for advice as he’s her and, but like Jon she must handle her allies with care, and not be scared to anger them. Dany has become a symbol for change in Westeros, the same as she was in Essos. It is both a mark of her power, and how hugely Cersei has f**ked up that an alliance between Highgarden and Dorne has even happened, as these two houses have been enemies for generations.

This history is still felt in the North. After some sound advice from Melisandre: who gravitates to Dany like the proverbial moth, Jon is invited to Dragonstone to bend the knee. At first Jon is reticent: I could be a trap, but Sansa once again puts it in terms that are easy to understand. Every time a Stark king heads south they die. The Mad King, Dany’s father, killed Ned’s father and older brother, and Sansa is afraid that Dany shares this thirst for fire and blood. You can’t blame her, even if Jon ultimately goes against Sansa’s council: again, both have good and understandable reasons that makes their conflict much richer. Dragonstone has a huge supply of dragon glass, and Dany has dragons. With the Long Night coming the decision is a no-brainer. As one Stark is about to leave Winterfell another is returning. After some pie-related humour Arya finds out that the Starks are back home. Whether Arya will get there in one piece remains to be seen. 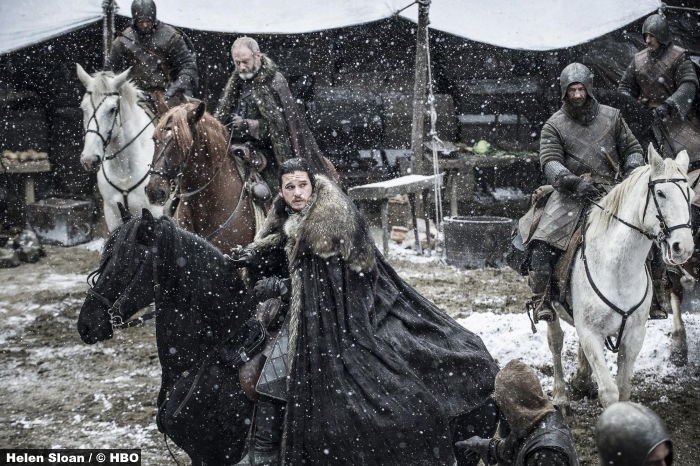 Stormborn has a lot of stuff bubbling under the surface. Much like the premiere, this episode is absolutely packed, with Jon and Dany dealing with their roles as rulers, Cersei firing a very Bard-like crossbow into  a dragon skull (another moment when I realised how much the definition of prestige television has changed), Arya’s long return home, Sam’s rebellious actions to try and cure Jorah, all of which ends with a battle at sea. Frankly, most of this works: Sam’s insistence in helping Jorah is an example of positive history, and his continued strong will shows how much he has grown as a character. Kings Landing get s some workmanlike scenes in which Jamie shows a skill for flattery and bribery, but I really should get to the battle. 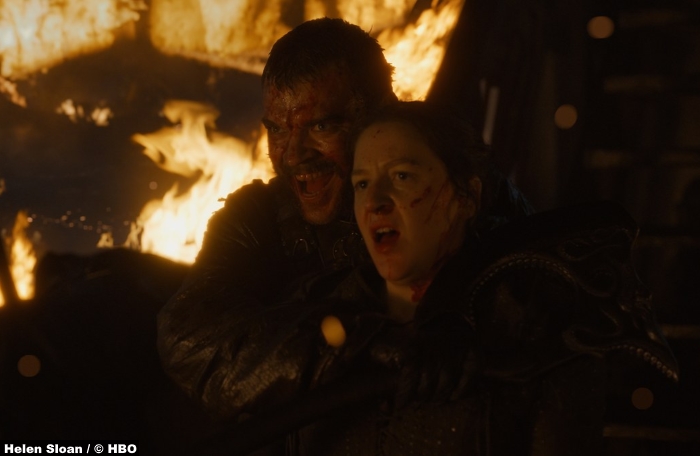 As a sequence, the battle of the Greyjoy’s is very impressive, but the fact that it involves both Ironborn, and Dorne only highlights how little the show has utilised these characters. Granted, the Greyjoys have been treated better, with Euron being kept for this season, but Dorne continues to be wasted. The show continues to completely fumble the Sand Snakes, killing two of them, and has wiped out any notion of these characters being interesting. George R R Martin spent an entire novel building Dorne, but the show prefers Euron.

8/10 – Despite the waste of Dorne, Stormborn is a compelling, often touching episode.