Game of Thrones S06E05: The Door – The White Walkers are coming and they don’t care about your fan favourites.

Now before we get to the part of the episode that got my totally manly allergies going, let’s talk about the White Walkers. The White Walkers have been a constant threat since the show began: sometimes teased and sometimes forgotten, but always there. They aren’t just a threat, they are the personification of the Stark house motto of Winter is Coming. They are also a threat that David Benioff and DB Weiss, the show-runners, hang in front of the audience. They know every time they give us even a glimpse of these Others that they will be met with fascination, and most importantly fear, from the show’s loyal fan base. In a symbolic sense the White Walkers are the door of the episodes title: a tantalizing door, frozen and ajar that we, and the characters are afraid to walk through.

The show’s first scene, all the way back in season one, introduced us to the White Walkers before anything else. Now, the first episode of any show can be considered a door in which the creators want you to walk through-and it seems right that these monsters are the first things we see of Westeros. They were the creeping darkness beyond the wall, and beyond the door. Each time they have been encountered: by Sam and Gilly, by Jon, and now Bran and Hodor, they have tried to keep them at bay, to slam that door shut. Yet as we see with Hodor, the door can only be shut for so long before they inevitably break through.

It’s an uneasy balance as a viewer, and a fan of the show, that we want more from the White Walkers (especially after Hardhome) and The Door, in true Game of Thrones style, makes us regret that desire with the death of a favourite character. It’s this inevitability that has made season six such a major step-up in quality. 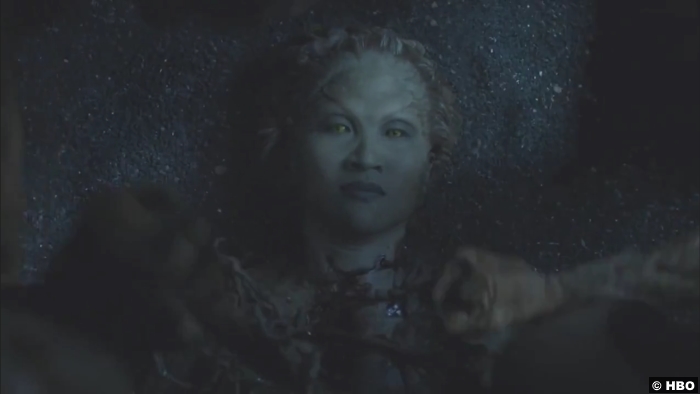 More than any other season, season six has delighted in giving us answers, and making Bran the conduit of these answers. Bran has been the most interesting Stark to watch this season- which his, and Hodor’s absence from season five definitely played a part in.  Through Bran we’ve been able to peak into the past: to see the very probable birth of Jon, and the revelation of Hodor and his communication problem. Bran has always been an adventurer at heart, something his father saw in him early and tried to temper by showing him the responsibilities that great men have to carry. His need for adventure is the very thing that got him crippled, his love of climbing and the Lannister’s love for each other resulting in Bran being pushed from a tower. Once again, playing the hero has consequences in the world of Game of Thrones-a lesson that Bran will have hopefully learned through Hodor’s death, because it is Bran’s fault. His need to be better led the White Walkers straight to them, his need to save himself in this moment affected Hodor’s whole life. The scene in which Bran possesses Hodor, past and present, is part of the show’s uneasy balance. We finally get our answer to why Hodor is Hodor, and it’s more heart-breaking and horrifying than we could have imagined. It cost him his life. 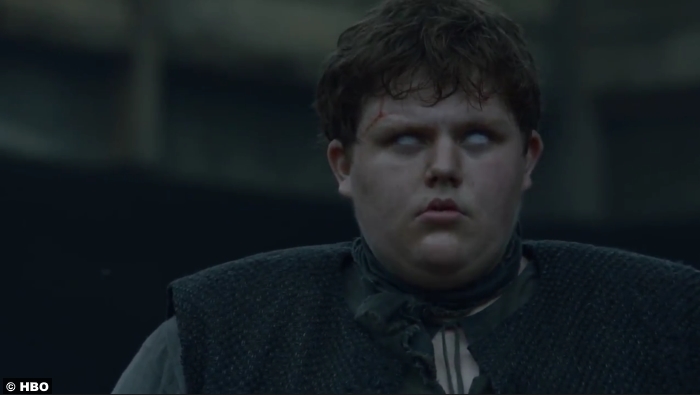 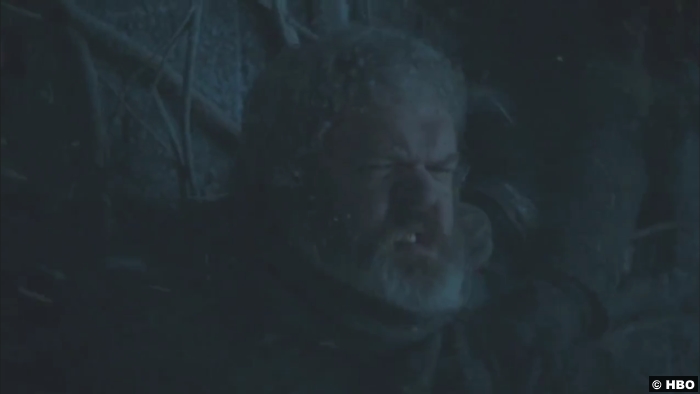 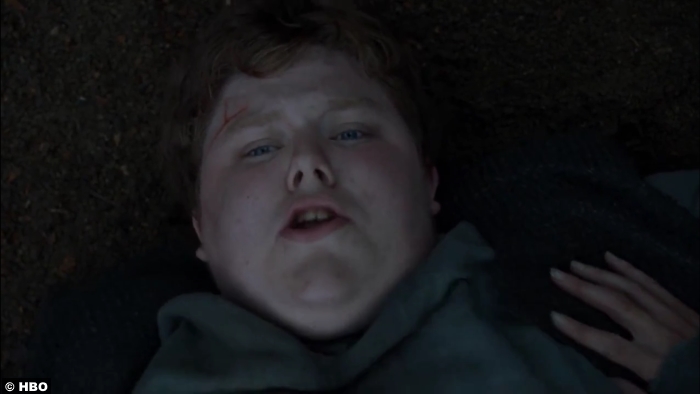 Elsewhere in Westeros it was an episode of second chances. The episode opens with Sansa receiving a summons from Littlefinger, who is very sorry for taking her from one monstrous family and giving her to another. It’s another strong episode from Sophie Turner as Sansa, playing up Sansa’s new-found strength but making sure Littlefinger knows that it came at an awful price. Ramsay may have broken Theon but he couldn’t break her. In a characteristically Stark-like decision she lets Littlefinger leave with his head intact, deaf to his now useless manipulations. Littlefinger may mean everything he says but how, after all he’s done, can anyone believe he’s sincere. In a very nice call back to Sansa’s practical skills, she makes herself and Jon new outfits befitting the Starks, even styling Jon’s after Ned’s old uniform in an act that that accepts Jon as a Stark and as her brother. They have a second chance together, and with her uncle The Blackfish taking back Riverrun, a new ally in the making. 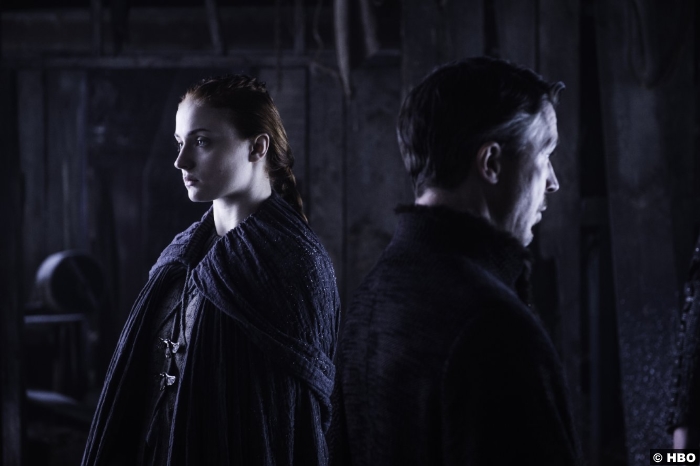 Theon also has a second chance with his family after returning to the Iron Islands and endorsing his sister as the first iron-born queen. An act that is immediately underminded by the return of their Uncle Euron who proudly tells their people that he is the true heir to the throne after he murder their father Balon. Played by Pilou Asbaek, Euron brings a new playful energy to proceedings as a man of the world returning home promising power and fortune to a proud populace. His gleeful suggestion that he murder his niece and nephew is an episode highlight. Although I don’t see his plan to marry Dany going down to well with the Dragon Queen. I see fire in his future. 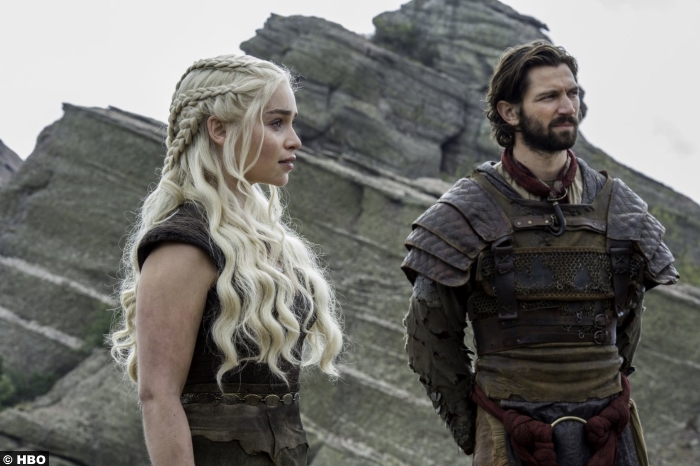 Dany is finally on the march again: adding the Dothraki to her list of conquered foes and forgiving Ser Jorah-which is only fair considering his continual efforts to rescue her. She is once again victorious but there is now the little matter of a red priestess, which in this show is never a comforting thought. Tyrion and Varys may want to remember the last time a Lannister went to religion for help. It didn’t go so well for Cersei, and the less said about Stannis the better. You have to wonder what the Mother of Dragons will think of what her kingdom has become in her absence.

9/10 – Winter has never felt nearer as the White Walkers march forward, and with all of Westeros’s heroes and villains fighting amongst themselves they won’t be able to hold the door for much longer.