Game of Thrones S06E09: The Battle of the Bastards – The battle for Winterfell is both won and lost in a typically brilliant 9th episode.

As we all know Episode Nine’s of Game of Thrones are a speciality of the show. After six years of beheading, wildfire, bad wedding etiquette, untimely demises, and riding a dragon out of a colosseum, episode nines can be firmly split into two categories. The first, and most popular, is the destruction of the shows status quo: Ned’s beheading, the Red Wedding and last years revolution in Meereen. The second category is the battle which, as Battle of the Bastards supports, is actually a return to the status quo: Tyrion defending Kings Landing, the Nights Watch holding Castle Black, and now Sansa and Jon have returned to Winterfell victorious. 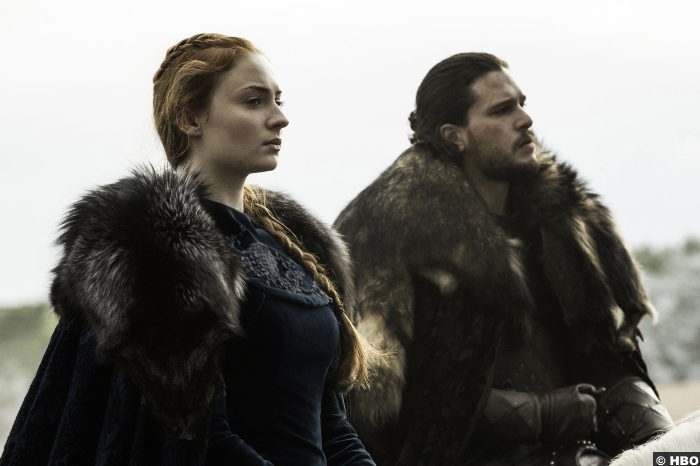 While this episode is part of the second category, it doesn’t fit as neatly as Blackwater, and Watchers on the Wall. For the last two seasons the show has enjoyed breaking its own rules and messing with audience expectations. Jon and Sansa are defending their claim to Winterfell, rather than Winterfell itself, and the death of Rickon is even more shocking because Starks only die in the first category. But before we talk about the main event in more detail, let’s start with the warm up in Meereen. 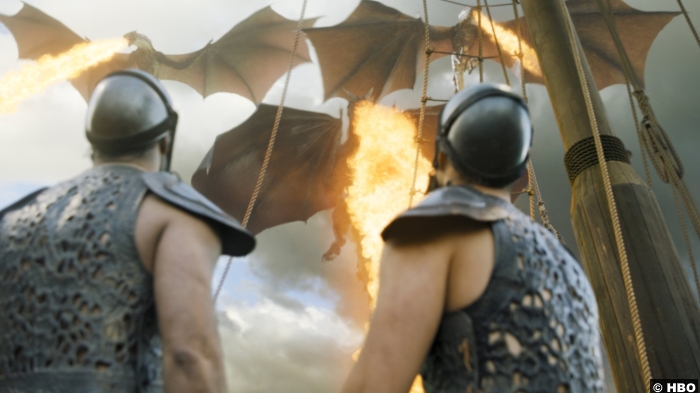 The bombing of Meereen was left frustratingly on the hook from last week so it was a logical place for the episode to begin. Daenerys is understandable cross with Tyrion who’s made a bit of a mess of things in her absence. The bombardment of the city is the stuff that fantasy is made of, with the kind of cinematic scope that has increasingly become the show’s bread and butter. Dany’s rage is tempered by Tyrion who has never seen an angle he couldn’t exploit. Their scene together at the beginning of the episode highlights just how far these characters have come: Dany, who displays some Mad King-like ideas of defence before Tyrion reminds her of a better path, the kind of compromise that has made her so powerful in the first place. The Masters are given a choice: surrender or be destroyed. After some slit throats, and a little barbecue at sea, they agree. Now Daenerys has ships and the city is safe.

It’s not just Tyrion’s cunning, or the wisdom displayed by Daenerys (and dragon riding let’s not forget that), that makes this victory so satisfying. It’s that the Iron fleet didn’t come in and save the day. If they had then Theon and Yara would have been in a better bargaining position, with the Mother of Dragons, and the city in their debt. Instead they need to convince a queen at the height of her powers after a convincing victory. It’s the scene between Daenerys, Tyrion, Theon, and Yara, that showcases the new understanding both Tyrion and Dany have with each other. Through his council, and her stipulations they have a new ally on their own terms. Now get across the narrow sea already!

Now to the north for the episode, and the season’s main event. Sansa and Jon vs Ramsay was always going to be an epic battle, with expectations so high, and habit of meeting those expectations. We all knew they had to fight but the build up to said-fight had just as much stakes. It begins with a conversation: Sansa and Jon meet Ramsay on what will be the field of battle to try and avoid bloodshed. Jon offers to settle it like the old days with a one on one fight with Ramsay. But Ramsay has never been one for tradition, noting that Jon would probably kill him hand to hand, he decides that his army is better suited to the job. In this we see the two men and the forces they represent: Jon who is honourable and would risk his life for his people, and Ramsay a cowardly sadist who expects people to die for him.

To battle then, but first some psychological warfare, Ramsay Bolton style. It’s through Sansa’s realistic view that Rickon was a goner. In one sense tradition fails Jon as Sansa isn’t consulted on how to win the battle. She knows Ramsay and what he’s capable of, and warns Jon to expect the worst. It’s quite an achievement that the writers, and the unforgettable Iwan Rheon, can still mine Ramsay’s psychotic bag of tricks to shock us. His game with Rickon: sending him back to Jon and murdering him when they reach each other is yet another high-point in his villainy. 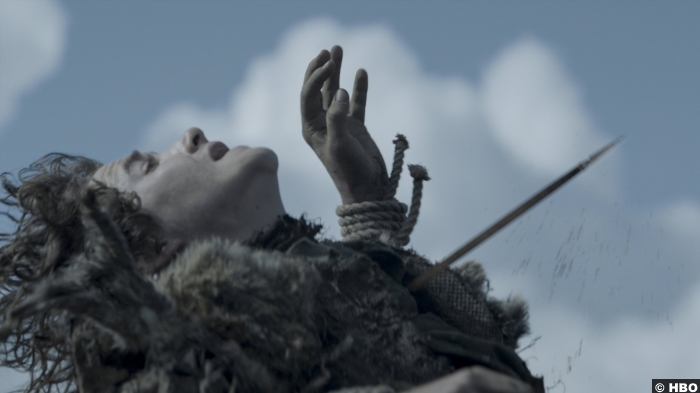 The battle itself is a masterful achievement by director Miguel Sapochnik creating some indelible images and keeping us right up close and personal with frantic editing and close-ups of violence. His greatest achievement, apart from the sublime tracking shot as we follow Jon through the battlefield, is the image of Ramsay’s army coming at Jon. A lone figure at the centre, his back to the camera with his sword out-stretched. If there ever was an image that summed up Jon’s character, and the world he inhabits it’s this: one honourable man, against the hordes of the schemers, traitors, and murderers. That is until his men, led by Tormund back him up, Jon is no longer alone. 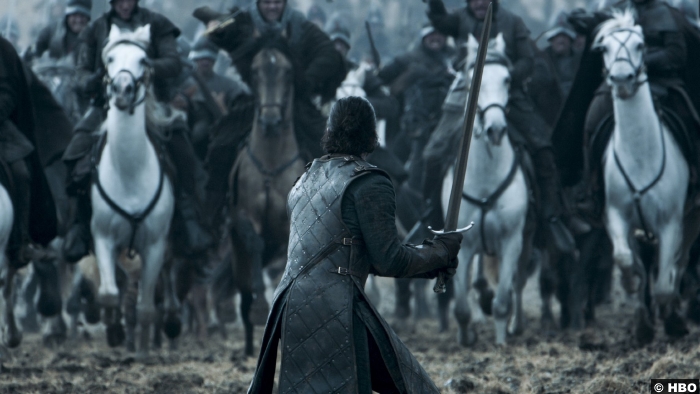 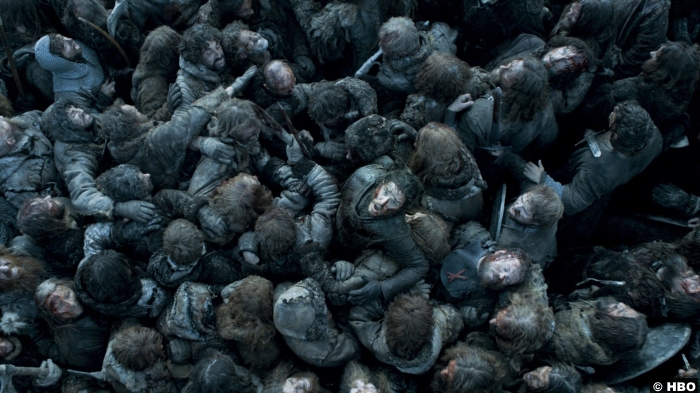 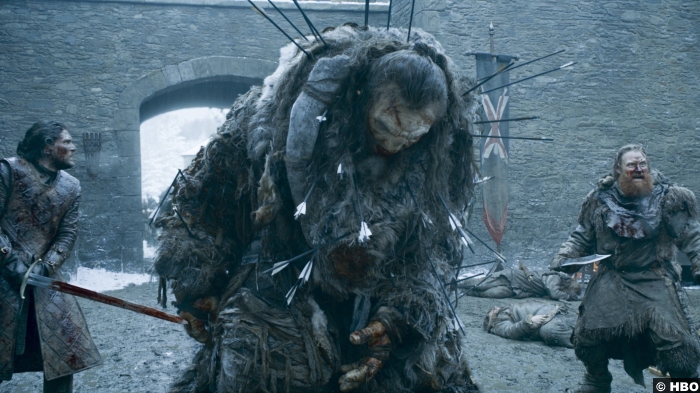 After a few setbacks, and Jon getting buried among the dead and dying, the Knights of the Vale, led by Littlefinger, help save the day. The battle ends, as it always should have, in the grounds of Winterfell. Ramsay finally accepts Jon’s offer of one on one, and in the episodes most superhero moment Jon picks up a shield emblazoned with the Direwolf of House Stark, proceeds to pound the ever-living shit out of Ramsay. Ramsay, however, is not Jon’s kill. That, quite rightly belongs to Sansa, who in a scene filed under poetic justice feeds Ramsay to his own hunting hounds. In one fell swoop we have lost one of the shows greatest villains, and in Sansa’s little smile at the end, the rectification of one of the shows best female characters. The North remembers, and we’ll never forget. 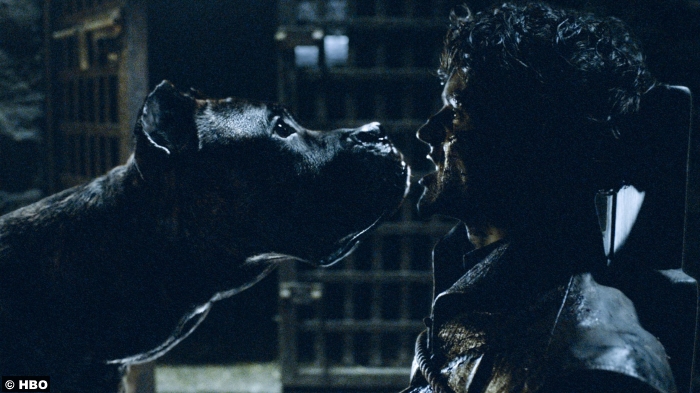