I need to calm down. The Winds of Winter is not the best episode Game of Thrones has ever done, but it is the best episode of the season. Yes, The Door has been beaten, or rather burned to the ground by The Winds of Winter, as the show ends its second act with new rulers, new conflicts, and some confirmed fan theories. It’s an explosive end to a season that has always been fascinating and often game-changing.

So let’s start with the new Queen of the Seven Kingdoms. The story of Kings Landing hasn’t been the most compelling thing about season six, apart from the magnificent Jonathan Pryce. Cersei and Jamie had been tossed aside by their easily manipulated son, Margaery was biding her time with a clever bit of religious acceptance, and the trial of Loras and Cersei loomed large on the horizon. All of these threads were merely fine, everyone new that the trial was going to be the centrepiece of this plot , and now that it’s reached its violent conclusion, all of those past threads are reveal to be part of a beautiful tapestry. It was all designed to back Cersei into the frankly Mad King-like idea of destroying the Sept, and all of her enemies including the High Sparrow and all the Tyrell’s she could get her hands on, in the process. 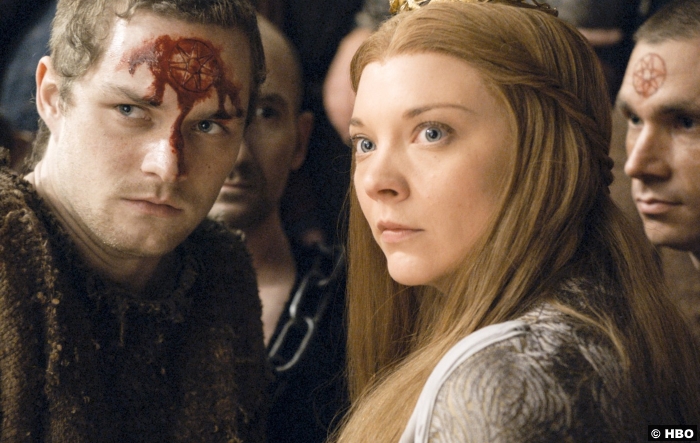 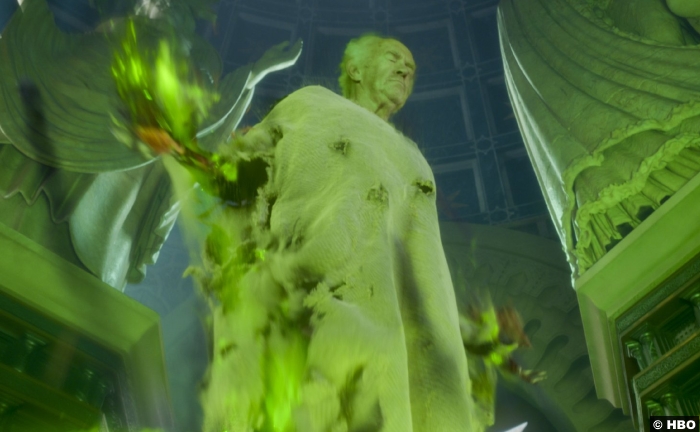 It’s a masterful sequence: we get a glimpse of the type of humiliation in store for Cersei through the spiritual breaking, and mutilation, of Loras, and in a montage reminiscent of the end of The Godfather, Cersei’s intricate plans reveal themselves, and it’s a bloodbath. Game of Thrones has never been shy about killing characters, but every time you think you’re desensitized to it, it pulls something like this. Margaery, Loras, their father, Kevan Lannister, and the High Sparrow himself are engulfed in wildfire, along with some of the surrounding citizens of Kings Landing. Even the old cockroach Grand Maester Pycelle bites the bullet. It’s not a complete victory though as Cersei’s actions drive Tommen to suicide, and drive Olenna Tyrell to Dorne and an alliance with Daenerys through Varys. 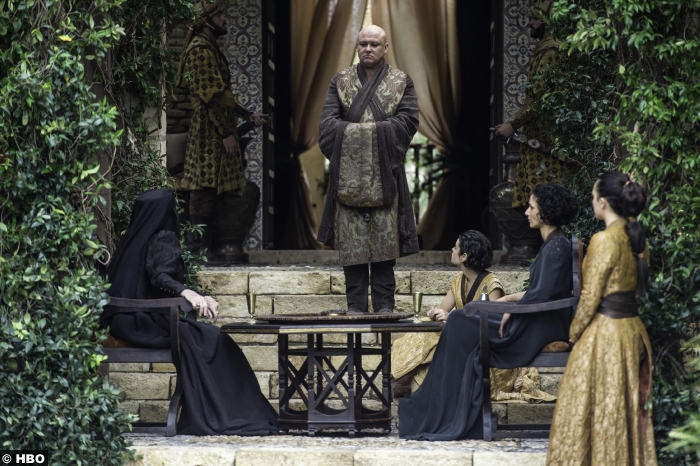 As Cersei told Ned all those years ago, life is about power and those who have it. She now sits on the Iron Throne, the first women to sit in that hideous chair, through her own hideous actions. By blowing up the Sept she not only destroyed her enemies, she destroyed the resting place of her children and her father. I guess queens can’t afford to be sentimental.

Which is something Daenerys has experience of as well. After her victory last week, she’s finally ready to sail to Westreros. Her rebuttal of Daario, a man who loves her, is painful and clinical. She can’t take her lover west because she might need an alliance through marriage. She’ a long way from the girl her brother sold to the Dothraki, and after six long years it’s finally happening, with the season’s final shot showing us the culmination of her efforts: the iron fleet, her friends and allies, including Tyrion with his new Hand of the Queen pin, at her side, and three huge dragons all coming for the Iron Throne. It’s a spectacular image, one that basks in just how immersive this fantasy show can be. We have the rightful queen, the Mother of Dragons coming on one side, and the Night King on the other with Westeros in the middle. 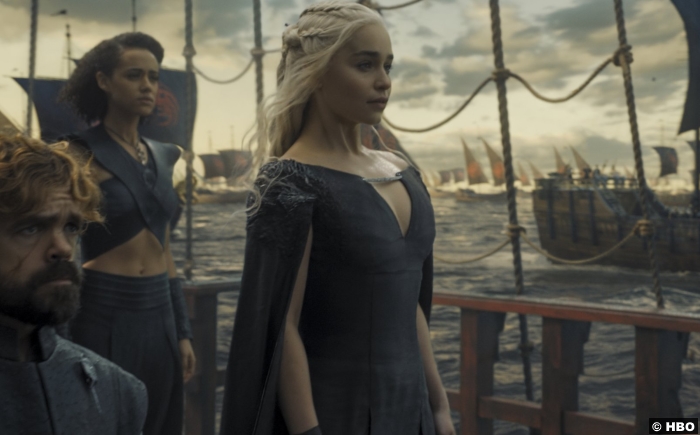 We also have a new king of the North as Jon takes the place of his brother, and father before him at Winterfell. There’s also the small matter of the shaky confirmation that Jon is in fact a Targaryen as its revealed (through my favourite exposition device, a Bran vision) that his mother is Lyanna Stark. This is a huge moment for many reasons: first of all it confirms the shows most popular fan theory, and second it continues this season’s trend of finally giving us some answers. Although it’s hard to shake the feeling that Jon is doomed. For one, the last king of the North was Robb and we all remember what happened there (although Arya has this weeks “F**k Yeah!” moment as she feeds Walder Frey his sons and cuts his throat), and there’s also that look shared by Sansa and Littlefinger, the same look Jamie gave Cersei as she sat on the Iron Throne. 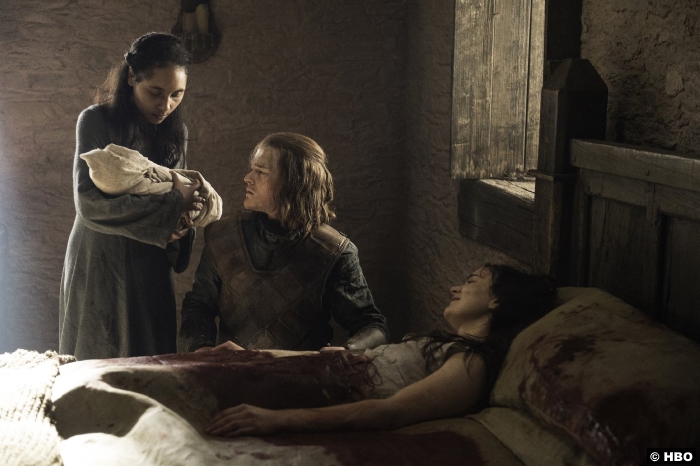 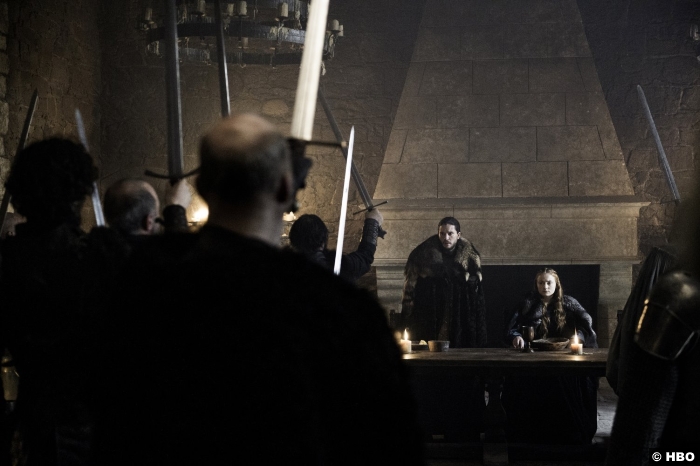 Sansa has been this season’s standout character, and she gets to share another powerful scene with Littlefinger in the godswood, in which he reveals his own aspirations for the Iron Throne, which he wants to share with Sansa. In a way, Littefinger symbolises all of the shows worst features, a misogynist, un-trustworthy schemer. It’s no coincidence that Sansa’s most powerful moments have come when she puts this weasel in his place, creepy kiss attempt included. These scenes are the show’s creators holding themselves to some account on their brutalisation of their female characters. It’s a nice sentiment, even if it can never completely work, and by having these words come out of Sansa’s mouth were a smart move. Its lip service, but it’s still something at least.

Although there was a slump in the middle, season six has been a glorious, and rewarding watch, and perhaps even the best run since the heights of season three. And if reports are correct, we only have 13 more episodes before the curtain falls on George R R Martin’s creation. Winter is finally here.

10/10 Without a doubt the best finale the show has ever attempted, with an epic scale, great character moments, and let’s not forget that Dany is finally on her way to Westeros. Winter has come and our long watch for season seven has begun, bring on the Clash of Queens.