Well, it’s finally time to see if ol’ Jimmy Delaney could pull it off. What “it” was exactly was still shrouded in mystery as we began episode 8, the final episode of season 1. When we last left him, he, of course, was telling Stuart Strange that he “had a use for” the Company man. What was that use?

James wants to make a deal with Strange or more properly, the Company. It seems that he’ll do just about anything to get that ship he needs, including giving up Nootka and all the tea in China. Oh and his and Godfrey’s testimonies regarding the Influence. 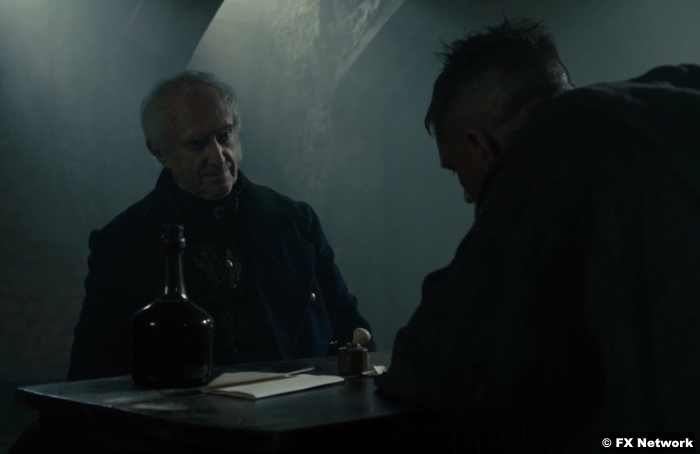 While this conversation is going on, the rest of his plan is falling into place, handily helped along by Robert delivering messages from James to Cholmondeley, Atticus, and other members of the league of the damned. If all this sounds like it’s super extra and unnecessarily complicated because he could have just negotiated this with Strange without getting locked up in the Tower of London AND tortured, that’s just how Jimmy Delaney rolls, baby.

Atticus is dispatched to pick up Helga and Pearl (Tallulah Rose Haddon) from their keepers at the company. It’s supposed to be a pretend hold-up, but might as well make it real. Goodbye, Pettifer (Richard Dixon). 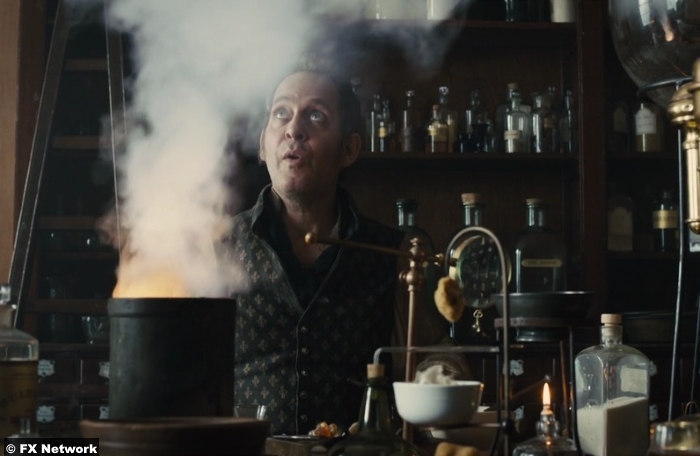 Cholmondeley’s task is to cook up explosives. Obviously.

Lorna pays a visit to Carlsbad/Countess Musgrove to get a letter of safe passage in return for James’s plugging up the hole in Carlsbad’s operation. The whole scene is a delightful marvel of coded language, as Lorna pretends to be a kind of cosmetic saleswoman peddling goods for one’s “poor, worn-out chuff.” Well, I never! Anyway, it comes in a powder *wink* and could allow you to take on a whole army. *WINK* Then after all that, she gets to say that she’s James’s mother.

While all that is falling into place, the crown is left holding the bag as they expect James to give up the names of the Americans he’s been dealing with. First they have to wait for a doctor to attend to him, as James has been mysteriously poisoned with some buyingsometimeium, at least until Robert gives him a signal. Then, instead of giving up the goods, he does a bit of chanting in Twi and then basically tells Coop, “Nah.” Coop fumes as they’re forced to let him go, so that’s definitely not the last we’ll hear from the crown.

You know if there’s one thing James loves more than grunting (there is nothing James loves more than grunting), it’s running errands. So as soon as he’s out of the hoosegow, he’s back at it. The most important errand he attends to is killing Dumbarton because he was a spy for the Company. I don’t want to say that this plot twist was not telegraphed at all, because I could have missed something, so let’s both say where it was hinted at and you go first.

Yes, I thought that too. Moving on to Zilpha. She’s dead now, gone into the Thames. She’s shuffled off this mortal coil, shed her earthly shackles, etc. and I would feel worse about it if she had been a real character and not a woman-shaped conflict for James to uh, push against.

Case in point: James reads her letter of suicidal intent and is ready to throw in the towel so he can mope and grunt. Thank God Lorna is there to tell him, essentially: Hey, a lot of people put everything they had on the line so you could pull off this little jaunt, so snap out of it! And thank God he listens.

Everything’s humming along too smoothly, innit? Well, that’s because it’s about this time that the crown decides that they couldn’t care less about tea or Nootka or anything short of killing James Delaney. So they unleash hell or whatever is the proper version of that–prissily declaring “The gloves are off,” I guess [RIP Wilton (Leo Bill)].

And then down at the docks, it is war or something close enough to pretend. It turns out that the bulk of the explosives James had Cholmondeley prepare were in the event of this, so they take out a decent number of soldiers with big bangs. However, there is still a decent number left, so there’s a full-on gun battle at the docks. Helga falls when she returns for a gun she dropped. Thanks to Lorna, though, she died knowing that it was a Company man who killed her girl. Cholmondeley is injured in an explosion, but he’s still alive at episode’s end. Lorna is winged, but is also alive. They both make it onboard, along with James, Atticus, French Bill, Robert, Pearl, and Cole, who came through the firefight like the Terminator. 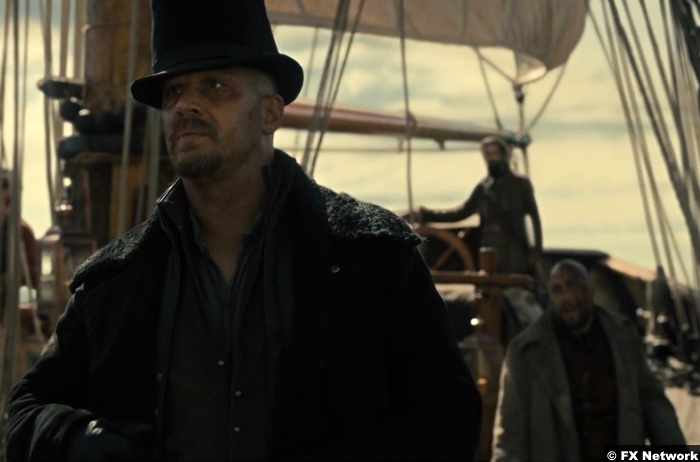 Over at Casa Delaney, where Brace has been sent since James told him he wasn’t going, Chichester arrives. Another recipient of a James letter, he’d been furious about the deal with Strange but that was just a ruse because James left his and Godfrey’s sworn testimony in his room. “Justice,” he says, as he looks them over. And that would be the cherry on Strange’s bad sundae, but James decided to put a cherry bomb on it, instead. So when Strange gets a mysterious package at the office, it’s not the Nootka treaty via Dumbarton, but rather a face full of boom juice. Boy, bye.

Back on the ship, Atticus asks about the course to America and that’s when we all find out that we’re actually going to Portugal first to see some guy called Colonnade. Atticus asks after the gunpowder, saying that he thought it was for the Americans and James says, “We are Americans,” as the Union Jack is lowered and Old Glory raised in its place.

8/10 – Some parts of James’s plan made absolutely no sense and seemed way more complicated than necessary, much like this whole show. However, like Cholmondeley, by the finale, they mixed it all together so it went off at the right time. Hopefully, if there’s a second season, they’ll spend a little less time brooding and a little more time picking up the threads they dropped.