For a show called Taboo, everything we’ve seen so far has been relatively sedate, give or take a few hearts eaten or incestuous relationships. This week, Taboo kicks it into high gear in an episode that could be called a bit much. James is after your heart again.

First of all, it’s not even time for Mother’s Day, but James’s mother is on his mind. After he insults the memory of his father in defense of his mother, Brace speaks up, telling James that Salish was no saint. In fact, James’s father had her committed because she tried to drown James. James starts yelling that this is fake news and then storms out, leaving Lorna and Brace to wonder where he is for a few days. 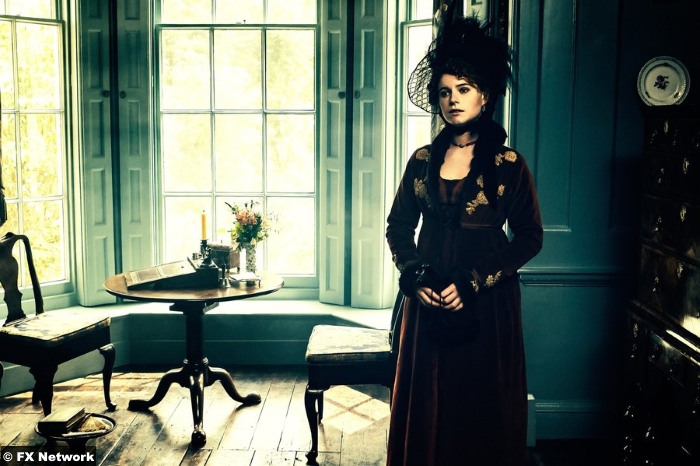 To that end, Lorna visits the Gearys to see if Zilpha has any idea where James could be. At first she gets to speak only to Thorne and I know you know that he’s the same ol’ fermented peach as usual. He’s drunk and tries to bully Lorna, who doesn’t take the bait, choosing instead to try to sidestep him. Zilpha finally appears and she’s…not well. She takes Thorne’s hand as she tells Lorna that she’s sure they have no idea where James has taken himself off to and she’ll thank Lorna to leave. When Lorna’s gone, Zilpha drops Thorne’s hand like it’s on fire.

Of course, there’s no reason to worry about James because as expected, he’s simply grunting his way around his usual haunts. The soldiers who were out in force last week are still poking around, trying to find the saltpeter. It, of course, doesn’t exist anymore, because it’s been converted into very volatile almost-gunpowder. Cholmondeley instructs his helpers at the farm that the chlorate they have to add is like adding a baby to a marriage, so it must be rocked constantly. Or stirred, rather, but you get the metaphor.

And everything would go–well, “fine” is overstating it a bit, so let’s say steady. Everything would go steady until the actual farmer, who’s been tasked with caring for James’s (and Zilpha’s?) son gets a good look at what’s going on and runs off to confess his sins to a priest. The priest is a venal little toad who immediately runs and tells that to the Company in exchange for a reward. So now James has two problems: the Company knows where his base of operations is and the farmer has loose lips.

The farmer problem he solves by cutting out the farmer’s tongue. Efficient! The former problem is a bit thornier. In its current state, the gunpowder cannot be moved by horse and cart–the jostling on the roads would surely blow everyone sky-high. But it must be moved, because the soldiers are coming. 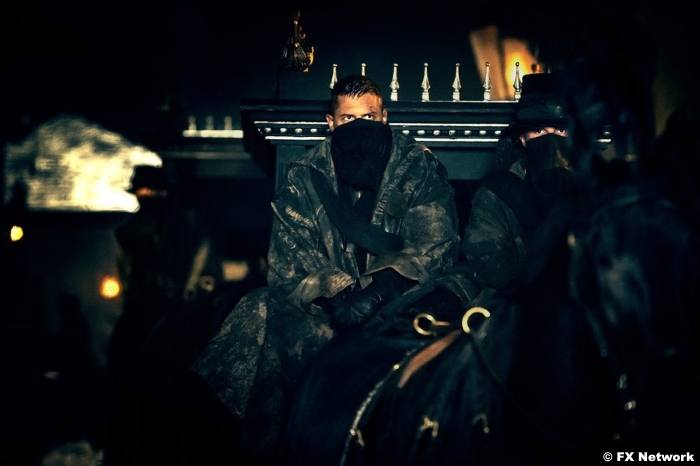 The solution, then, is to move it by boat and tunnel, in a beautifully shot sequence that it makes it look like they’re traveling into the underworld. To get it through the city, they employ the aid of Dumbarton’s current ruse: he’s declared a cholera outbreak so that he (and James, in turn) have space and privacy to put their schemes into play. So James and company cover their faces–this is cutting-edge communicable disease technology–and pack the gunpowder into coffins for their ride through London. This is also a great sequence, especially when they are met by soldiers who don’t buy that they’re just transporting corpses. Too bad for them, then, that Robert has clambered into the child-size coffin they’re carrying and does a great job at playing dead. Gunpowder problem solved. For the moment.

Strange is scheming in other ways to solve his James problem, but his Chichester problem is just starting to unfold. Seems that Chichester knows that the Influence was actually called the Cornwallis and took on its new name when it became a slave ship. Why would they start ferrying slaves to begin with? I’m sure that it has nothing to do with Strange’s brother’s plantation in Antigua.

Anyway, put a hatpin in that story and return with me to Chez Geary, where Zilpha is putting a hatpin in Thorne’s heart. I told you that woman wasn’t right. And now James knows, because she shows up at the Delaneys’ to tell him that she killed Thorne just like James told her to. James is like, “I did what now?” But he hustles off to deal with the body of Thorne Geary, who has tragically died of cholera. 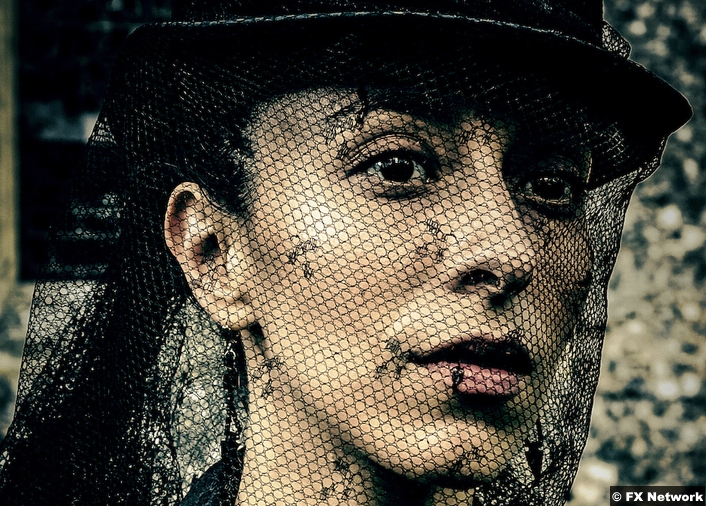 After the funeral, we get our expected return to the really unhealthy portion of the Delaney siblings’ relationship. The coitus is however interruptus by James’s having a flashback to his mom. Hate it when that happens. He consoles himself later by playing with a lighter as he’s surrounded by the gunpowder, which they’re now storing in the abandoned hospital.

The next day, he’s on his way to his ship when one of Strange’s lackeys stops to tell him that it’s war. “The gloves are off,” he says, which is a hilariously prim way to deliver that message, or at least it is until James’s ship explodes.

James’s actions to solve this latest setback: 1) Threaten Godfrey, who swears he knew nothing about the plan, 2) Kill the redshirt whose thumb he’d previously taken and give the man’s heart to Atticus,who definitely did not want that, and 3) suggest that Helga kill a captain in her brothel so James can take his ship. He’s not exactly coming up with the A+ plans right now, so he opts for B plans and the B stands for booze.

As he’s drowning his sorrows at the docks, Winter visits. He once again tries to shrug her off, telling her he’s not fit to be with, but he can’t refuse when she gives him more alcohol. He should refuse, because when he wakes in the morning, face down in the mud, little Winter’s body is lying at the water’s edge. And someone’s taken her heart.

8/10 – How’s James going to get out of this one? I can’t see him killing Winter, but that part is really kind of moot, because her death is going to send a world of hurt cascading down on James Delaney. Between Helga and the law (and the crown and the Company), the squeeze is only getting tighter.