In this, Taboo’s weakest episode so far, James and his league of the damned launch what should be an exciting move: a plot to steal saltpeter from the East India Company to make gunpowder to use against the East India Company. However, in order to get to that point, we have to sit through a solid 40 minutes of not that.

The worst part is at the beginning, when we’re forced to observe Lorna Bow’s degradation in jail. James has told her to go with the police and keep her head up, because he’s going to take care of it. He does, but that’s cold comfort, though, when you’re watching Coop unlace Lorna’s bodice as she shakes with fear. Or, you know, when you’re Lorna.

Yes, these were brutal times and this was probably an accurate depiction of jail life for powerless women then. However, it doesn’t mean we need wallow in the filth of it. 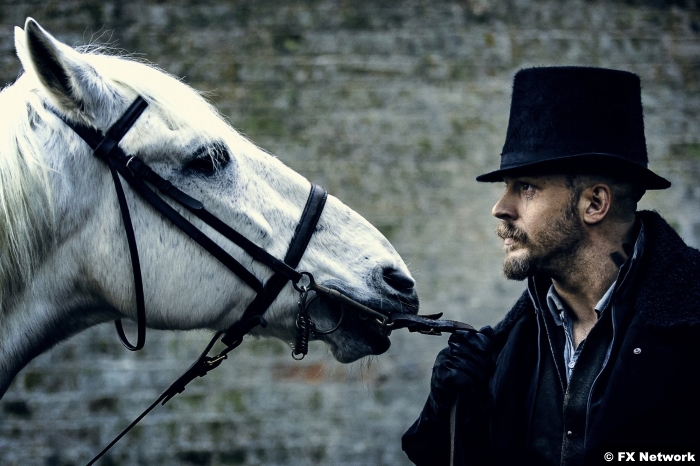 And speaking of wallowing, as I said, we spend a lot of time watching the characters do just that, spinning their wheels as they get everything in order to rain hell down on the Company or whatever it is exactly James is planning.

I’ve realized that I’ve become accustomed to the speed in which Taboo reveals its secrets and thus, I’m less bothered than I was at the beginning of the series that I don’t know everything yet. However, in saying that, I must also confess that the whole Zilpha-James dynamic is boring me to tears. It’s even worse when her loathsome husband enters the fray, as he does this week, spilling the half-siblings’ secret at a party and later challenging James to a duel. To that, I can say only, REALLY?! To quote the late, great Chalky White, “Ain’t you got any notion at all?” I guess not. 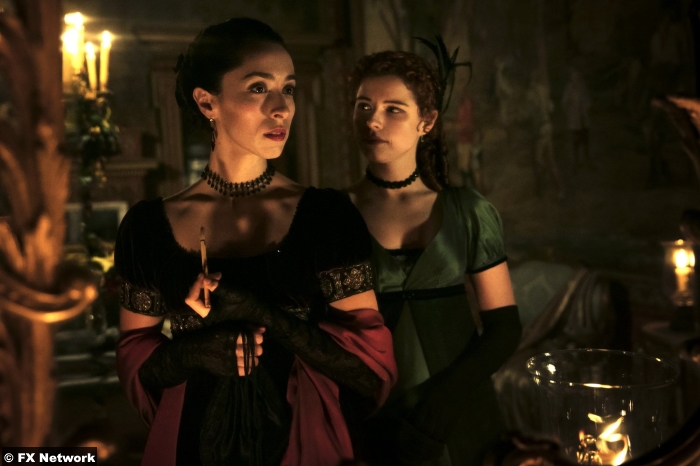 Anyway, James astrally projects himself into Zilpha’s bedroom and subsequently, into her, and if this were a regular sex scene, I’d feel like Billy Eichner here, like I should be asking people on the street, “DO YOU CARE?” Do you? I sure don’t, except that the fact that Zilpha has not pursued this at all makes for dubious consent and for my increasing weariness at how stupidly problematic this show is. It has introduced a number of dicey topics and handled none of them well, but making James a possible dream-rapist is a real achievement in trash. Having Thorne actually rape Zilpha right after is the cherry on this trash sundae. Like the scenes with Lorna, I feel like I’m supposed to be titillated or shocked, but instead I’m just rolling my eyes.

So, enough of that. Let’s move on to the real action. James has been blacklisted from buying gunpowder, but he needs it to trade and for the hellfire, so he has to figure out a way to make his own. He finds a chemist, Cholmondeley (Tom Hollander), who can make it with urine and feces–what a time to be alive and typing this on the internet–but the process could take up to a year unless they introduce some saltpeter to the brew. James could get it from Burma, but it’s so much easier just to steal it in town.

After that’s decided, the United States sends a mountain of a man to kill James, but they really must try harder, because James climbs the mountain (by stabbing him) and then guts him as a present for the US. Wow, you shouldn’t have.

We know it’s the US who sent the man, because they’re the only ones who benefit now if James is dead and because Dumbarton admits as much at the party, which is thrown by the Countess Musgrove (Marina Hands). There’s all sorts of intrigues going on at the party, but the most important part, perhaps is that James and the Countess get shoved into a closet as part of a grown-ups’ version of Seven Minutes in Heaven and that’s when he finds out that the mysterious woman is really Carlsbad, the American spy handler. They discuss negotiations for Nootka before they’re pulled out by the crowd. 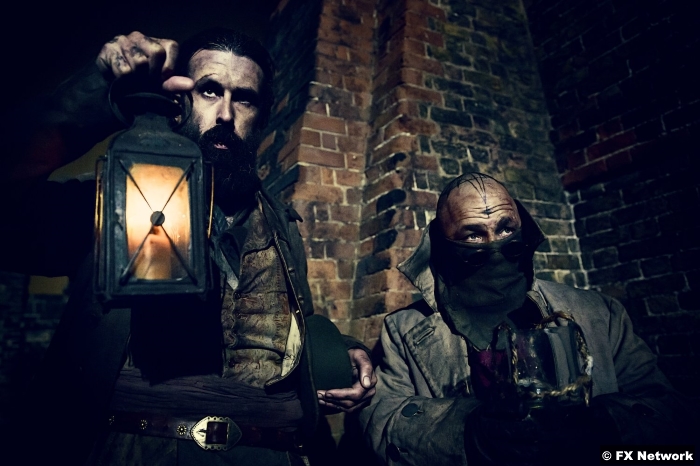 Meanwhile, while James is very pointedly establishing an alibi, the league, which now consists of Atticus, French Bill (Scroobius Pip), and a coterie of working ladies from Helga’s brothel, puts the heist into action. The ladies work their magic as distractions, as does a bit of chemistry via Cholmondeley, while Atticus et al just use good, healthy violence. The end result is that they get their saltpeter and Taboo has one of its finest sequences yet. If only it hadn’t take the whole episode to get there.

7/10 – After a rollicking episode last week, Taboo unfortunately returns to sluggish form. I’m fine with the show slowly parceling out its secrets, but I’d rather not watch paint–or another p-word–dry while it’s doing so. The saltpeter heist was great, but I wish we didn’t have to sit through execrable scenes like that bedroom one with Zilpha in order to get our pudding.