Review: A Monster Calls is a powerful movie about hard truths

I’ve stated in many previous articles my feeling that scary or intense movies are good (within reason) for young people to experience. The sights and sounds that sometimes spark nightmares may be tough in the short term, but in the end, the impressions they leave will help shape the young person’s character. They’re like adding seasoning to a sauce. You can make your pasta sauce without oregano, but who would want to eat it? Sure you can go your entire pre-teen years without ever seeing The 1984 Ghostbusters (with its creepy Library ghost) or Raiders of the Lost Ark (with its face-melting scene), but what kind of bland life would that bring about?

Now granted, as a father of three, with the eldest being ten years old, I’m a little more protective of what my boys watch than my parents were. By the time I was ten, I’d already seen Network TV versions of Aliens, Jaws, A Nightmare on Elm Street and more. And yes I had nightmares, but those movies seeped into my brain right at the beginning of my most formative years. I can’t imagine what kind of a dull adult I would have become had I just watched cartoons and terrible, pointless, live-action Disney movies like Blank Check or That Darn Cat.

There’s a time and place for simple nonsense, but sometimes you need some oregano in your life. 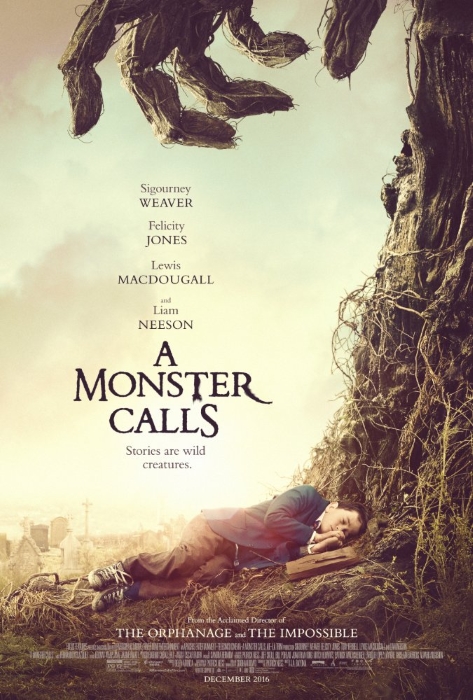 A Monster Calls is not a “kids movie.” There are few, if any, opportunities to laugh. The story is sad, its main character is going through several different crises; in no particular order: He’s being bullied at school, his father has run out on him and his mom, his grandmother (who helps raise him) is cold and insensitive, and his mother is dying from cancer. If there is a positive lesson to learn from so much suffering, the movie does not pause to explore it. Instead, its central theme is of acceptance, letting go and realizing basically that life isn’t always “storybook.”

In a story, there are happy endings. Good characters struggle but in the end, everything turns out alright; the good guy triumphs and the bad guy is vanquished. In life, however, things are more grey: Sometimes (and in fact, most of the time) there is no purely evil person, sometimes the ending is not happy, and sometimes the good guy loses what is most important.

The lesson our main character—Conner O’Malley—learns is that life is not fair, that he must accept that, cry about it, get angry at it, and then just…move on.

He learns this anti-storybook lesson from, antithetically, a giant talking tree with a penchant for telling stories.

Change the tree into a therapist, a minister, a compassionate older friend, or some other like figure and you have the makings of a very by-the-book drama. A Monster Calls, however, using as Conner’s great help, a character that would be right at home in an otherwise happy storybook. 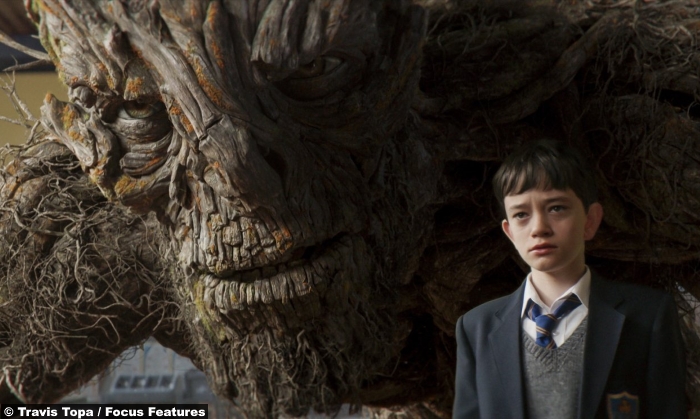 The giant tree–voiced expertly by Liam Neeson, comes to visit Conner at 12:07 am, driving his massive fist into the young boy’s bedroom window and scooping him into the night air, only to tell him that he’ll be back soon to tell him a story. And then…he’ll come back again to tell him another story, and then another, and then, after three stories have been told, Conner will tell his story, which the Tree calls “his truth.”

Each visit from the Tree comes at a particularly tense moment in Conner’s life. The first is after a fight with his Grandmother, who hints (not very subtly) that he’ll be living with her once his mother (her daughter) finally dies from her cancer. Conner has to this point been in constant denial of his mother’s fatal condition, certain that each “newest treatment” will be the one to make her all better. Conner believes his grandmother to be evil for wanting to take him away from his mother.

The monster’s first story is of a prince whose father dies, leaving the kingdom in the hands of his wicked stepmother. The prince meanwhile falls in love only to awaken one morning to his beloved having been stabbed to death. He tells the villagers that the queen was responsible, rallies the kingdom against her, kills her and then takes his (rightful) place on the throne. But, as it turned out—the Tree informs Conner—the prince actually killed his beloved himself, in order to frame the Queen and secure enough support to overthrow her.

Conner is confused because he sees the world in black and white terms. Is the prince good and the queen evil? No, the prince is a murderer; therefore he is evil and…the queen is good? She did not actually kill the king, but she was evil and the prince ended up being a good and just king like his father before him. So who is good and who is bad? That’s the thing: they are both…both.

It’s here where a lesser, safer movie, would have played up the “moral of the story” and showed the grandmother in a more sympathetic light. Instead, it doubles down, showing her to be just as cold and unapproachable as she was before. Because that’s who she is. She’s not a villain, she’s just not a very nice lady. And even though she does, at the very end, soften to Conner as they come to a mutual understanding of each other, she’s still largely depicted as a shade of grey.

The second story comes as Conner is dealing with his estranged father, back in his life, temporarily, due to his mother’s illness. The Tree tells the story of a priest who preached to lift other peoples’ faith but had none of his own. He preached and railed against a greedy apothecary who charged much money for potions of medicinal aid. The priest favored more modern medicine as opposed to pagan-like customs. But when the priest’s two children become ill and no modern medicine can heal them, he cast his principles aside to beg the apothecary for help. But the apothecary explains that faith in his skill is required and the priest’s naked desire and willingness to throw away his own convictions made it impossible for the girls to be healed. The children die and again shades of grey are highlighted, as neither character is very virtuous (the apothecary is greedy; the priest is unscrupulous). If there’s a lesson to learn it’s that it’s easy to stand upright when times are good, but when things are bad we often throw principles away and fail to practice what we preach, just like Conner’s father who left at the first bit of trouble with his wife, leaving his son to be raised without a dad.

Again, does the movie go for what is easy? No, there is no happy ending where the dad comes back and raises his son as his own. Instead, he makes excuses for why Conner can’t live with him and when the moment comes when Conner would need him the most, he is presumably on a plane back to his new home in Los Angeles. It’s not “storybook” but it is very real, because for a lot of kids, an absent father is real, and a happy family is a fairytale.

The Tree’s final story happens right after a turning point in Conner’s struggle with his school bully. For months (or perhaps longer) this bully and his cronies have been violently and emotionally abusing Conner. Finally, the bully decides he’s done attacking Conner and instead tells him “you’re invisible to me.” Denying his very existence is the final and harshest attack he can muster on the abused boy, who stares as his bully strolls away, thinking he’s settled the issue for good. The Tree then reappears (essentially being an exaggerated extension of Conner’s imagination) who tells a short story of a man who was invisible and who resorted to violence in order to be seen. At that, Conner snaps, charges at his bully and inflicts enough damage to put him in the hospital. 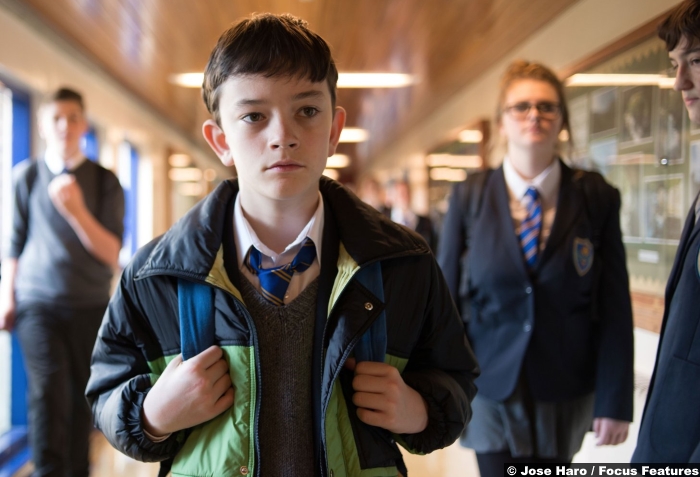 For his trouble, Conner is sent to the headmistress of the school who says that expulsion is usually the punishment for such behavior. Except she won’t expel Conner. When he questions this, the teacher simply responds “What good would that do?” The meaning being “you’re going through enough as it is, with your dying mother, so what would further punishment really accomplish?” It’s the same thing Conner’s dad said to him after Conner destroyed his grandmother’s living room, breaking a family heirloom clock she was particularly fond of. “What good would it do to punish you?” Throughout the movie, Conner is seen doodling in class instead of paying attention and listening to music with headphones and an iPod clearly visible, but his teacher does nothing about it. No one sees Conner anymore. They only see “the boy with the dying mother.” By all accounts he’s invisible. The Tree’s third story, like Conner’s life, has no happy ending; it just harbors a cold and uncompromisingly harsh truth.

And that’s the “lesson” of this movie. Life isn’t fair. Sometimes it’s very harsh and there’s not much you can do about it other than accept it.

Conner runs away from the hospital as his mother’s life is nearly expired, and meets the monster at a cemetery. The Tree snatches him up, threatening to kill him if he doesn’t tell a story of his own. Conner refuses and refuses, as the Tree insists that he tell “his truth.” Finally, Conner reveals it: He wants it to be over.

After repeatedly insisting that his mother will get better, he finally says out loud what he’s known in his heart for so long: His mother will die, he’s sick of the pain of watching her suffer and just wants it to end.

And it does. He comes to peace with his grandmother, who finds him at the cemetery and drives him to the hospital. He holds his mother tight and then “lets her go.” 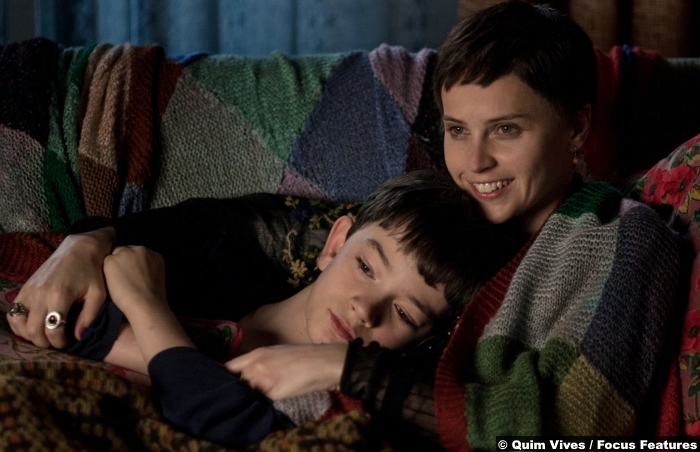 There’s an epilogue, but essentially the hospital scene is the end of the movie. There’s no triumphant resolution. There’s no grand moral to the story. Don’t misunderstand, the movie is certainly not as cynical as “life sucks and then you die” but it does teach the fundamental—if harsh—truth that life is not always fair, there isn’t always a clear good and bad, and sometimes the ending is not always “happy.”

The movie is cathartic, but that’s not to be confused with happiness. It’s conclusive and decisive, but you won’t walk away feeling very “complete.” It’s a very sad movie and it probably won’t be remembered as a beloved children’s tale, but it’s an important movie for older children to see. It teaches lessons most “kids movies” are afraid to touch, and explores emotions and hard situations that many children are suffering through. Those children often turn on the television to see programming “for them” that displays happy families and simple lives they can only dream of having.

In reality, many children are going through tragedies, and A Monster Calls does not dismiss that, nor does it sugarcoat it. Instead, it says “yes, it is hard right now, and while it is, it’s okay to cry about it.”

9/10 – It’s not a movie for every child, but for the right children it can be a very important film and one which can help shape their lives as they enter their formative years.

For such children, it’s highly recommended.