Review: The Space Between Us fails to do its premise justice

Other than horror films, there are not enough wholly original genre movies produced these days. Certainly there’s no lack of new ideas being turned into new movies, but most of them are small, more artsy films. That’s not a knock; many of those movies are fantastic but most of them are dramas (or, again, horror movies). Most science fiction films are sequels, reboots, remakes or otherwise adaptations. The genre just isn’t trusted with a totally new property because usually it commands a larger budget. If you strip the budget to make the movie less of a risk, then you end up with subpar special effects or a no-name cast. Either way the result is a movie with either bad word of mouth or no interest from the general public; the film flops and studios continue the cycle of not giving sci-fi movies a chance unless it’s from an established universe.

So when the trailer for The Space Between Us dropped last year, it seemed like finally someone was giving the genre a chance. Here is a movie with a totally original screenplay and a name-actor attached to it (not to mention a rising star as well). It wasn’t a “hard” sci-fi (which tends to focus more on the science and less on the fiction), and really was just using the genre to tell a teenage romance story, but it was something. And the trailer showed promise. The movie was pushed from December to February, and though usually that’s a bad sign, it was said that the delay was to give the upstart movie a better chance to be seen (away from Star Wars and Sing). That’s plausible. Now that’s it’s here, however, it seems the “bad sign” was an accurate omen. 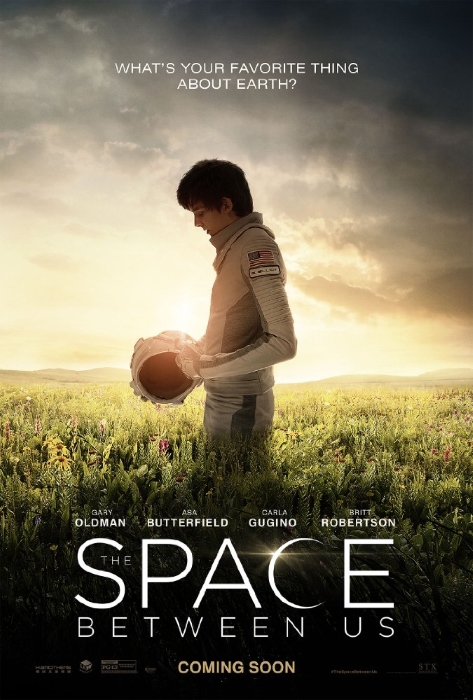 The Space Between Us has a really great premise: An astronaut discovers she is carrying a child on her way to spend an extended time living on Mars. Unable to turn around, the child, who develops almost entirely in space and on Mars, is born on the Red Planet, and spends sixteen years knowing only the scientists that come and go. Unable to live on earth due to his body not being acclimated to the difference in gravity, the child (now young man) nevertheless yearns to go “home” and meet his father.

That’s a great premise but unfortunately all the potential it had is squandered with a story that focuses on all the wrong things and leaves many of its more intriguing ideas unexplored. There are also a great number of smaller plot contrivances that bog it down and keep the film from getting even the benefit of the doubt as its story takes turns that most will probably wish it wouldn’t.

Let’s start with an assortment of little problems that annoyed me throughout the movie (spoilers!):

First of all, the movie establishes that the mission to Mars takes eight months. Furthermore, Gardner (the Earth/Martin baby) is born almost immediately after the team lands on the Red Planet. That means the mother was one month pregnant when she rocketed into space. Indeed the first ultrasound image we see is of a well-developed baby. The movie would have you believe that NASA is sending astronauts into space without a blood test at least a month before launch, when everyone knows that’s absurd. NASA does constant tests of all kinds, to ensure that the men and women they send into space are healthy when they leave. She would have been discovered to be pregnant and would have been taken off the mission, simple as that. But if that happens, we have no story, so the movie just glosses over that inconvenient truth.

It does that a lot. 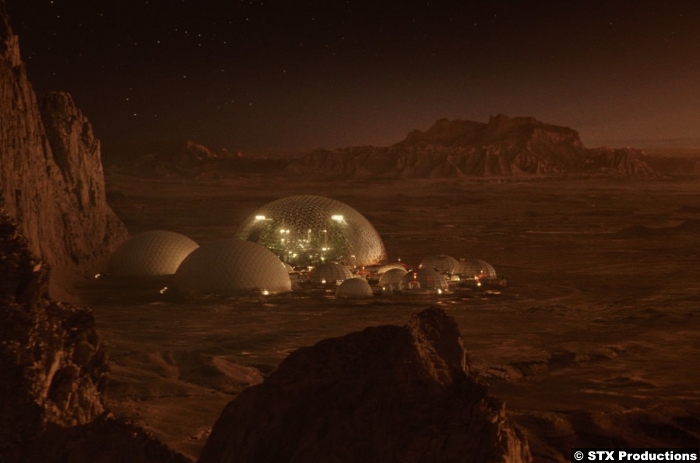 When NASA discovers that they have a baby halfway to Mars, the few key people in charge of the mission debate whether or not to release the news to the public. After Gardner’s mother dies in childbirth (a fact which was spoiled in the trailer), it is decided to keep his entire existence top secret. That’s insane, considering NASA is under the oversight of the Federal Government, who would have known about the baby’s existence as soon as everyone in NASA did (the ultrasound was shown on the big screen at Mission Control for crying out loud). There’s no way it would have been (or could have been) kept top secret. We’re not talking about the Aliens at Area 51; we’re talking about a big PR nightmare; it’s the M.O. of the US Government to get in front of such things. It would have been revealed, making a big part of the plot null and void. So again, the movie just glosses over that.

And then there’s all the things that happen when Gardner makes it to earth and breaks out of his quarantine facility. He meets the girl he’d been chatting with (there’s no real-time chatting between planets by the way, but I’ll let that slide since Gardner’s teenage years are set around the year 2033 or so) and begins both a journey to explore the planet he’s been deprived from as well as a mission to find his dad (armed only with a photograph of his parents and his mom’s ring with Native American writing on it).

As they go on their journey they steal at least three different automobiles. One of the cars is a BMW, stolen from an auto-repair shop. The kids hot-wire it using an app. I’m no futurist, but I doubt the Google Play store is going to be allowed to host an app that lets you hotwire cars with just a few basic keystrokes. They steal another car when a lady leaves her door wide open as she enters a casino hotel. Presumably she expects the valet to park it for her, but instead the kids just run around, hop in and take off. Where is the valet? Why didn’t the woman at least look back to see the state of her car before hitting the slots? How are the police so inept that they can’t find a stolen car on a well-traveled highway in the middle of the day? At one point the duo is shown driving a nice full-size truck and we aren’t even shown how or when they stole it. At least three counts of grand theft auto occur and this is never resolved in the movie. It really annoys me.

At other points in the movie, they steal clothes, food, and even borrow a lady’s iPod that she conveniently leaves unlocked and exposed on top of her table at the cheap diner she is eating at. She gets up to change her kids diaper and just leaves the tablet to be taken. No one would do that, but the kids needed it, so she conveniently leaves it for them to use. That’s not just luck; that’s contrived.

A high school teacher didn’t know Thomas Edison electrocuted an elephant. How the heck can you not know that and call yourself an educator?

While cruising around Earth, Gardner’s knowledge of the planet varies wildly from knowing facts about famous people to not knowing what a horse is. The movie also would have you believe he has only seen two movies, ever. One is a German art-film and the other is a black and white romance. There’s no rhyme or reason to it. 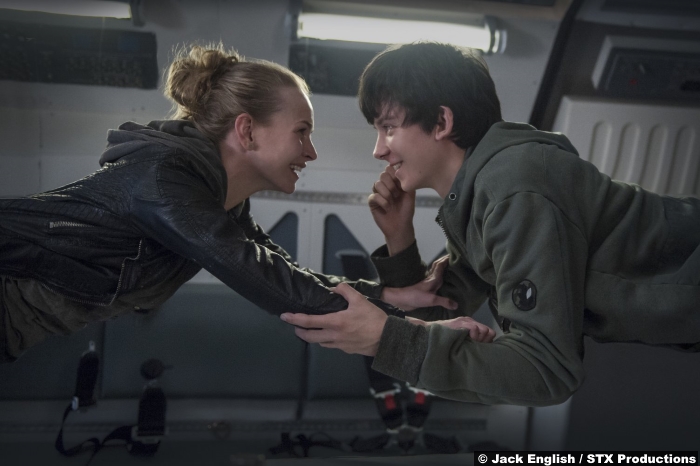 Sure enough, Gardner’s body does begin to suffer potentially fatal side effects from suddenly being exposed to earth’s gravity. What’s unfathomable is how the movie chose to resolve this. Sure, in the end, he does have to return to Mars, but in the meantime he finds himself nearly dead on planet Earth. In order to save his life, before they can get him back to Mars, they load him up in a space shuttle and launch him into orbit. Somehow just being in zero-G conditions stops his radically enlarged heart from rupturing and stops whatever fancy blood disease he had from continuing to spread throughout his body. He should have long been past the point of no return. But nah, he’s fine after a quick spin around the planet. After that he returns to earth and takes the next flight back to Mars.

All of those issues would be more easily forgiven if the story was good. Unfortunately it is not. The movie chooses to focus on all the wrong things. The best parts of the film are the quiet, short little moments where the fish out of water teenager asks random people what their favorite thing about Earth is. One person says “the rain” and later Gardner gets to experience rain for the first time. It’s a beautiful scene that is not given the chance to breathe or mean anything. Instead more time is focused on the teenage romance plot that is too flimsy (and filled with the aforementioned contrivances) to hold your attention. 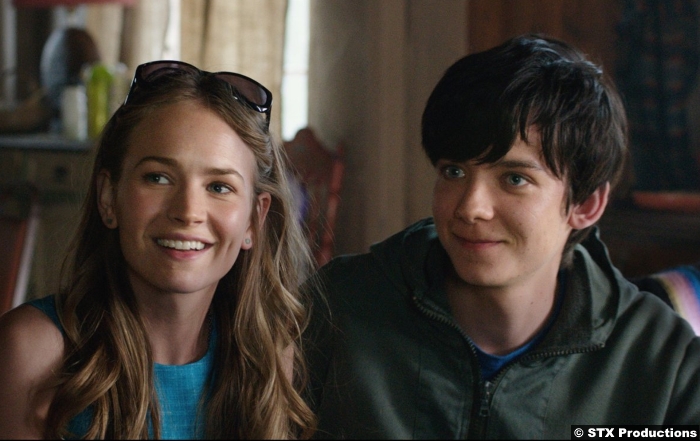 Had this movie been about an idealistic, optimistic teenager from Mars learning how lucky we have it by being around the usually-cynical and spoiled people of Earth, it would have been a story worth telling. Having this child be forced to leave the planet we all take for granted would have been a powerful ending. Instead the movie spends most of its second act mired in run of the mill teenage angst. I suppose the target audience won’t mind it as much as I did (I am about twice the age of said target audience) but I also think they would have enjoyed the more cerebral and poignant story that could have told had the director chosen to focus on Gardner discovering how much the people of Earth take our planet for granted.

At the very least it would have been a more meaningful movie. Instead the good idea is wasted, and so is another chance to do an original genre film. 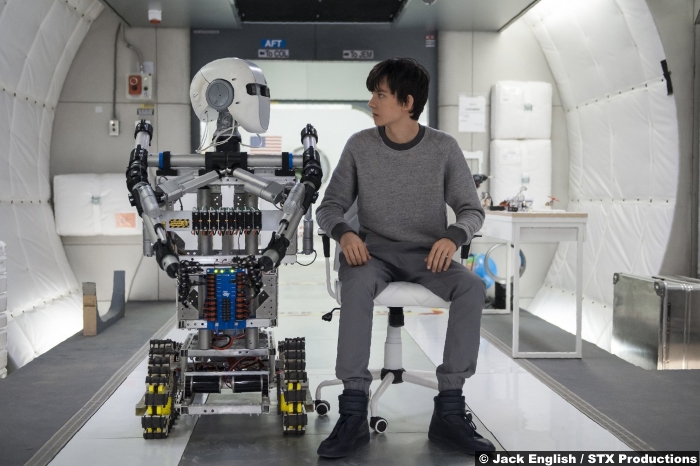 6/10 – The film’s biggest problem is that told a poor story from a good premise.

I really wanted to like this movie and even more I wanted to support it because it’s a wholly original movie (not an adaptation, reboot, sequel, remake, etc) and we need more of those that aren’t horror movies, small artsy films or straight-dramas.  But this just didn’t work.

Maybe the next one will.