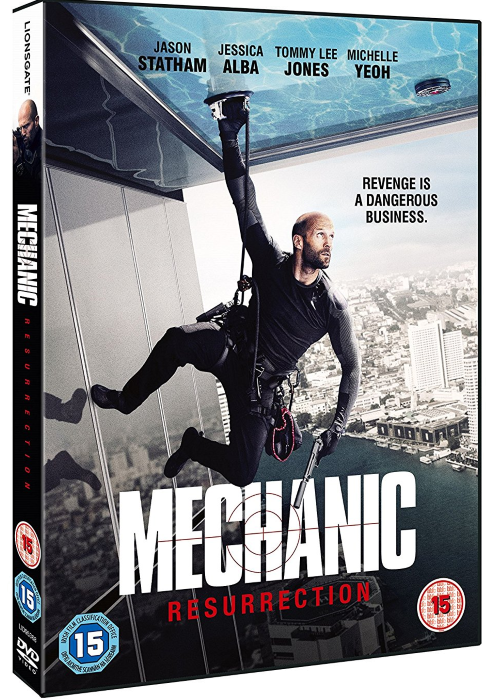 Sequels to remakes are generally met with scorn upon their very announcement, though I am usually open-minded enough to let the film live or die on its own merits.

On a side note, if you want to know my opinion on remakes in general (and why wouldn’t you?), click here to read ‘Repeat Reboot: The Sequel‘ which covers the entire gamut of remakes, reboots and reworkings.

The previous film was a remake of a 1970’s Michael Winner movie starring Charles Bronson and Jan Michael Vincent in the lead roles of the old-and-almost-retired hitman and his young-rookie-in-training student. It was more of an introverted actioner and the action was second to character development.

Statham’s remake pretty much sidestepped the character development and because of that, the two versions (while sharing the same basic story), are very different beasts.

Also, spoiler for a 44yr-old film; Arthur Bishop genuinely dies in the original, while the remake had him only fake his death at the movie’s climax.

And so we find ourselves in uncharted terrritory as far as the story of The Mechanic goes.

Beginning with our bald hitman (no, not that one) being incognito (or as incognito as a 5’ 10” muscle-bound hairless Brit going by the name of Santos can be) in Rio, the movie doesn’t take long in getting to the point as the mysterious Renee Tran drops in with knowledge of Arthur Bishop’s former life and presents an offer; kill three men for her employer and reap the financial benefits.

Bishop is happy with his life, so declines the offer. Unfortunately for him, her employer is Riah Crain and he doesn’t take rejection lightly, so kidnaps Arthur’s girl and has her deliver an ultimatum; either the three targets are killed in the next 36hrs… or she is.

That’s all the impetus our boy needs to go on a globe-trotting hunt to take out his targets and save the girl.

As you would expect, Jason Statham could play this type of role in his sleep and even though the film is not going to win any acting awards, he is ably supported by Jessica Alba and Tommy Lee Jones, while Michelle Yeoh and Sam Hazeldine provide more rounded characterisation of the film’s villains that you would expect.

Some of the set-pieces are unintenionally hilarious, but a good few are visually stunning, including one that features a target swimming in a glass-bottomed pool that justs off the roof of a skyscraper.

Add in some amazing location shooting and visually, the film is gorgeous. Mix in some stupid-in-a-good-way histrionics that only Jason Statham can pull off with a straight face and you end up with a film that shouldn’t be taken seriously, but should be watched for an hour-and-a-half of fun-fun-bang-bang action.