Bridge of Spies Review: Spielberg, Hanks and the Coens 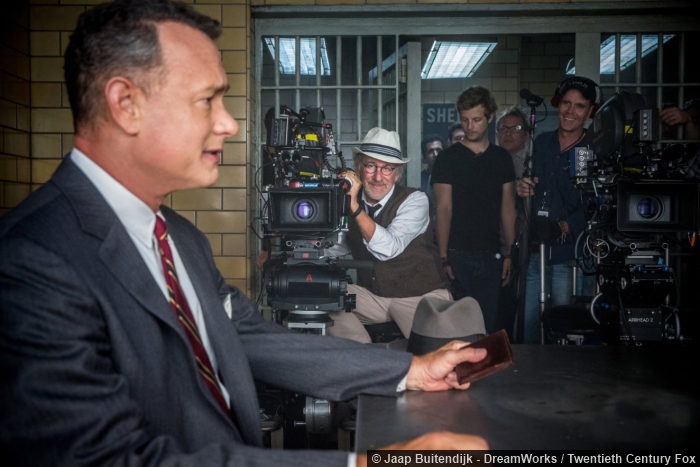 Steven Spielberg is the gold standard for directors. His style has evolved over the years (from a kid making grown up movies, to a grown up making kid movies, to a grown up making grown up movies) but the one thing that hasn’t changed is the big heart his films all have. From Jaws to Jurassic Park, Sugarland Express to Schindler’s List, the man makes movies that feel. This movie—Bridge of Spies–comes a little over three years after his last movie, Lincoln, which marks the longest he’s gone between films. He’s not perfect, and sometimes he picks bad scripts, but when the stars align there’s not another living director you want shooting your movie.

Tom Hanks is the gold standard for male leads. He’s as suave as Cary Grant and as everyman as Jimmy Stewart. He is lampooned by The Simpsons as the most trustworthy man in America, and his charm, his wry smile and his self-deprecating style are such that its hard to argue with them. He’s among the last of Hollywood’s leading men. In an era of franchises and shared universes, Tom Hanks is his own brand, being able to carry a movie with just his name in bold print on the poster.  He’s had some missteps here and there, but when you need an actor to carry your movie there’s not a better man than he.

The Coen Brothers are the gold standard for sharp, nuanced scripts. Their movies have ranged from satire to noir to noir posing as satire and vice versa. Their versatility is remarkable. When you consider that the same guys who did No Country for Old Men also did Burn After Reading, you know you’re dealing with a special set of talents. Whether its the frozen gore of Fargo or the trippy mood swings of The Big Lebowski, if you’re looking for a unique story with every plot hole tied up, the Coens are your guys.

And now these gems of cinema have joined forces like the Travelling Wilburys. It’s almost unfair. I mean when you put some of the best of the best together, how can it be bad? Spoiler alert: It’s not; it’s stellar. I watched this movie immediately after seeing Guillermo Del Toro’s Crimson Peak. As much as I admire Del Toro’s work, it only took five minutes of seeing Bridge of Spies to notice the step-up in quality.

From the very beginning you can see and feel how high quality the movie is. The opening is a five minute, almost entirely wordless sequence, that follows a mild mannered painter—Rudolph Able—around Brooklyn as he is quietly observed by trenchcoat-and-hat wearing mystery men. Finally the painter sits down on a park bench and reaches under the seat to grab a nickle that had been stuck there. The nickle is a fake, hollowed out to contain a secret code; this man is a Russain spy. The time frame of the movie (late 1950’s) makes that a big no-no.  Not long after reading the secret code his house is bombarded by federal agents (who had been tailing him previously) and he is taken into custody. All of that happens, again, with little to no dialogue. As great as the Coens’ screenplay is, that opening is all Spielberg.

As the movie unfolds, the director’s trademark love of camera movements shines through. Pushes and zooms, big closeups and odd angles are all over the place. They’re not a distraction; they’re a calling card. They keep long dialogue scenes from being too stale. No one, no matter how riveting the material, wants to watch two stationary people talking back and forth for 10+ minutes at a time. Not all directors understand that; Spielberg does, and he uses the camera like it’s a third party, pacing back and forth, shifting its gaze from one talker to the next.

And the screenplay is riveting. The movie is actually two films in one. The first half is a sort of courtroom drama, and the second portion is a quasi-spy movie. Neither of those descriptions do it justice, however. There’s only one or two scenes actually in a courtroom;  most of the drama is limited to how the trial affects the people involved. This is a welcome change, since “courtroom dramas” have become so overdone, they almost demand some hook or gimmick to maintain the audience’s interest. In this case, the hook is the paranoia that existed in 1950’s America during the height of the Cold War. This is the era of McCarthy, where anyone suspected of being a Russain spy was suddenly guilty until proven innocent. 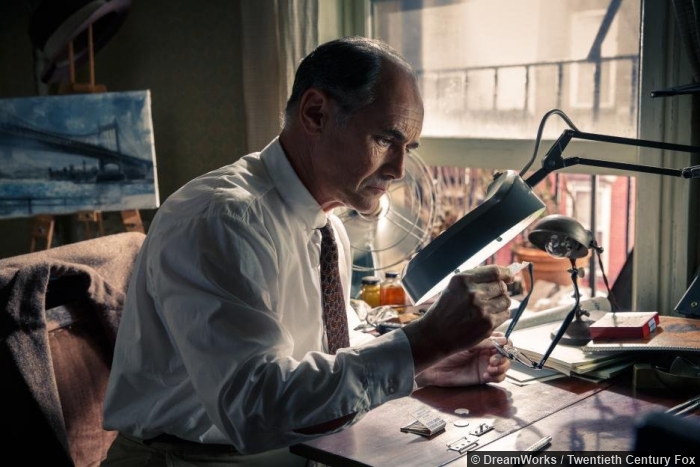 Hanks’ character, James Donovan, is a humble but skilled insurance attorney. He begrudgingly takes up the court-appointed defense case of Abel, knowing full-well that he will be hated by his country for doing so. A lot of the drama is reminiscent of Oliver Stone’s JFK, and how Jim Garrison was harassed while searching for answers regarding the Kennedy killing.  Donovan struggles with putting together a credible defense, due to everyone from the police to the judge wanting to cut to the chase and get a quick guilty verdict in. There’s no question the spy is guilty, but Donovan argues that due process was not followed, that the Constitution was not respected and that the way of life the USA was seeking to preserve in the face of Soviet cold-aggression was not being followed. Everyone else seemed content to give a passing wave at the chief document of the land, but Donovan insisted on treating the Constitution with respect, much to the ire of his fellow Americans.

That’s one thing this movie showed very well: All national parties involved come out with their warts exposed. Though the USA treated their prisoner with some humanity, Russia does not do likewise for their captured soldier, US-Spyplane pilot Gary Powers. While Russia is happy to offer up a show trial in finding Powers guilty of espionage, the USA’s courts were more secretive about their farcical courtroom proceedings. Still, the USA is depicted as just as guilty as the Russians in how they achieved their desired-“guilty” verdicts. Also Berlin, which consumes the second half of the movie, comes off as a petty wannabe, desperate to sit at the table as an equal participant in the negotiations between the USA and the USSR. To that end, they initially refuse to give up an American college student they detained (mostly as a ploy to get that aforementioned seat at the table), until the USA shows them some respect. There are no purely good guys here; everyone comes out looking a little worse off. Except for Hanks’ Donovan. He remains a freedom and family loving saint.

As to the second half of the movie, as said, it’s set mostly in Berlin, and focuses on the negotiating skills of Donovan as he tries to secure the release of Powers (and the aforementioned college student) in exchange for the USA’s release of Abel. This is the “spy” portion of the film, although this isn’t Mission:Impossible or James Bond. Donovan has to deal with a CIA that is only concerned with getting their man out as soon as possible (with no regard for the captive student), silver-tongued Russian negotiators who say a lot but promise little, and an East Berlin that, right as the wall is going up, is one of the most unsafe places in the world. None of that is exactly fodder for a spy movie, it’s more a movie about spies, and about the nations that employ them.

Never lost in all of the tension in and out of the negotiating rooms is the heart of the characters, particularly Donovan and (though his role diminishes as the movie goes on) Abel. The climax of the film is the scene on the Glienicke Bridge where the exchange takes place. Unfortunately for Donovan, the release of the college student was negotiated to take place in another location. Though the CIA attempts to pressure him to make the switch without waiting for the other prisoner to be released, Donovan holds his ground and eventually the USA walks away with both men returned.

A lesser movie would have ended right there, with Donovan’s ethics and pursuit of freedom winning out, but this is Spielberg, so of course there’s a coda that brings it home, literally. Donovan returns to his family, who thinks he had been fishing in England. Though he was content to let them continue thinking that, eventually word gets out, the hero he is becomes public knowledge, and the freedom and Constitution loving insurance lawyer is vindicated fully. 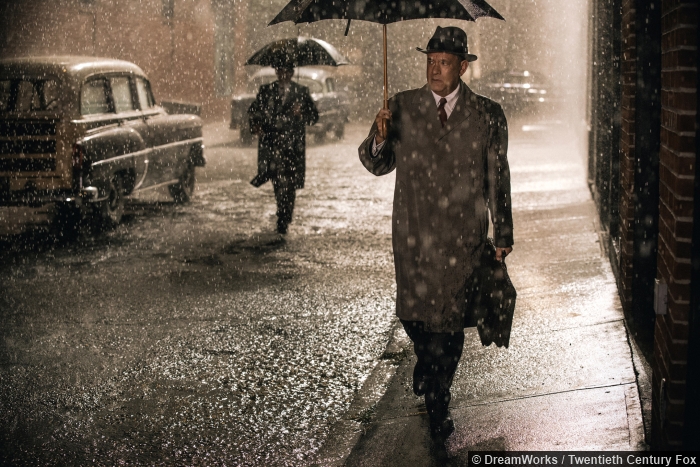 The movie is beautiful to look at, the score (featuring Thomas Newton Howard filling in for–and mimicking–the then-ill John Williams) is superb, and it goes without saying that the directing, acting and writing are all top notch. This is a classic sort of movie that could have easily been made a generation prior, with Grant directed by Hitchcock from a screenplay by Capote. That would have been something to see.