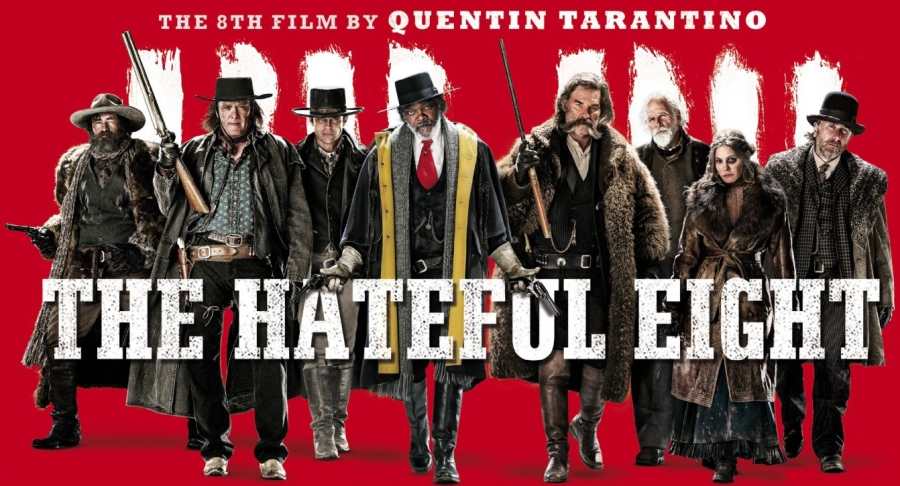 Quentin Tarantino famously said “I didn’t go to film school; I went to films.” The infamous director loves bucking trends and with The Hateful Eight he has once again thumbed his nose at the establishment and done something new: In this case, what’s “new” is actually what’s “very old.” He’s made a throwback western but has layered it with his own particular brand of violence and tension. Like all his movies, The Hateful Eight is a film that pushes the limits of what the average viewer can take.

But maybe that’s the first thing you need to know about Quentin Tarantino: His movies are not for the average viewer. There’s as much language and violence in any of his movies that you will find in any run of the mill R-rated action flick, but there’s something different about Tarantino’s movies. They have the language and the violence, but the presentation is very different. Instead of hackneyed dialogue and cliched plot devices, Tarantino’s movies have depth, significance and most of all, nearly flawless screenplays. Tarantino is a master wordsmith and even though his cult of fans can’t agree on which film is their favorite (mine is Inglorious Basterds) they can all agree each one contains a brilliant script with wit, suspense, and black humor.

And that is what makes The Hateful Eight so disappointing.

Take away the screenplay and what do you have? You have a western, filmed in gorgeous 70 millimeter (ultra widesreen). Turn down the sound and you have a movie that plays homage to the old westerns and epics of the last century, with the twist being that the landscape is covered in snow, as opposed to the classic western look of brown and yellow, where everything is baked in dust and dirt. It’s a beautiful film.

It’s just not a particularly engaging one. 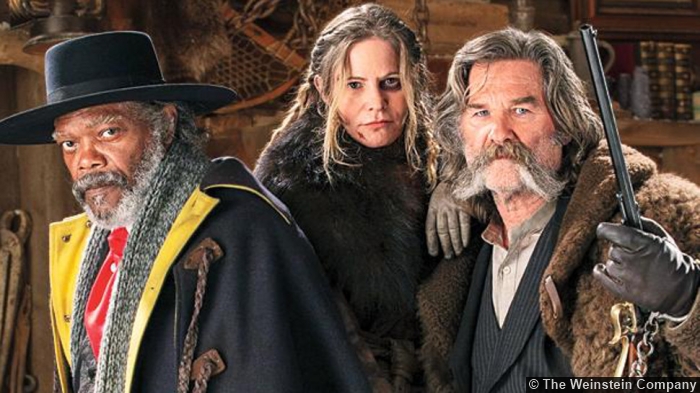 The plot, set in the post-Civil War west, is easily explained. There are eight people to know (obviously), broken into two groups of four. The first group compose those who share a carriage ride together in the beginning of the movie…

Those four are on their way to the town of Red Rock, but due to a blizzard are forced to seek shelter in a haberdashery. When they arrive they are greeted by four individuals who are likewise snowed in…

We are introduced to the first four one at a time, and each is given plenty of the patented Tarantino charm and wit, the other four are given lesser introductions, as though the director wants us to see them as glorified extras. They still get moments to shine, but not as much as the original four that we first meet.

Without spoiling too much of the plot—which has its share of surprises and twists—the basic gist of the movie involves the tension of being trapped in a one-room cabin with seven other people, none of whom you totally trust, if at all. Kurt Russell plays the hangman, a nicknamed he acquired as a bounty hunter due to his insistence that every criminal he captures reach their legal end (the hangman’s noose), even if the bounty allows for “dead or alive.” Because his particular bounty—played by Jennifer Jason Leigh—is worth a lot of money, he is naturally suspicious of someone putting a gun to his head and taking her for their own. He disarms the other snowed-in inhabitants (with the exception of the general and Samuel L. Jackson, who plays the other bounty hunter).

Things…happen, and we end up in a situation where someone is clearly guilty of attempted murder, but the audience is kept in the dark as to who is the culprit. The movie has been described as being similar to Tarantino’s first masterpiece, Reservoir Dogs, but that movie was tightly edited without a second of wasted film to be found. The tension in that movie was second to none in parts, and though this movie tries to recreate that feeling (even with two cast members returning), the execution just isn’t as sharp the second time around.

Instead of tension, there are scenes that are dragged out a little too long, killing the suspenseful mood. This is the same problem to be found in Tarantino’s previous movie, Django Unchained. Some scenes are just ten or twenty seconds too long. Sally Menke, who edited all of Quentin Tarantino’s movies from Reservoir Dogs to Inglorious Basterds, was really the unsung hero of those movies. Her death meant that someone else–Fred Raskin–would be Tarantino’s new editor, but the work just doesn’t live up to the standard that Menke brought.

It’s not all the editor’s fault, however, as the script itself is probably the weakest of Quentin Tarantino’s eight movies (not counting Death Proof). There are moments of brilliance, and parts that are “laugh out loud” funny and other parts that are “catch your breath” delightful, but overall the screenplay is tedious. It lacks the energy found in Basterds and Kill Bill. It lacks the wit of Reservoir Dogs and Jackie Brown. It lacks the imagination of Pulp Fiction. Is it better than most of the schlock Hollywood puts out every month? Absolutely, but it’s not up to the standard it sets for itself. And fair or not, this movie will be compared to the seven Quentin Tarantino films that went before it.

In that case the movie is good, but not good enough. 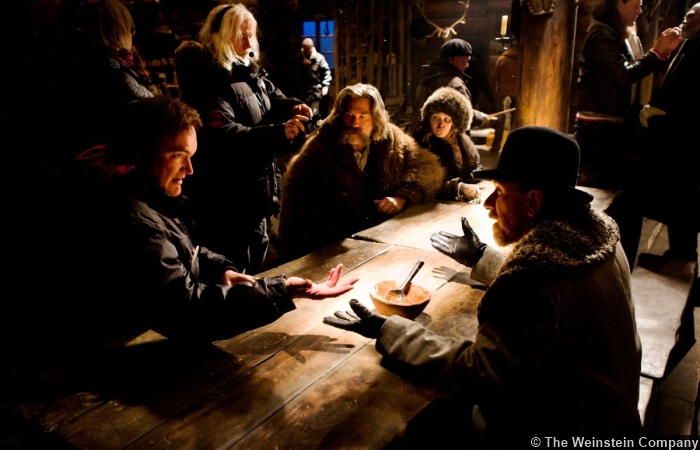 7/10 – If you can see it in 70 millimeter, it’s worth it for the “experience,” otherwise, check it out on home video if you are a Quentin Tarantino fan.