And just like that, we return to Elliot’s world. 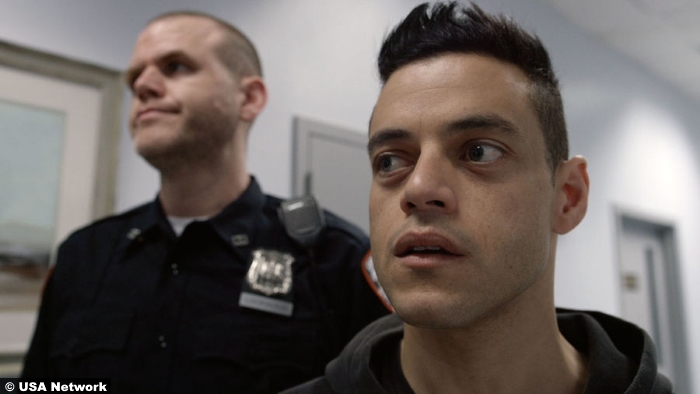 Finally, we see why Elliot has been in prison. Spoiler alert: It wasn’t the 5/9 hack. It was for hacking Michael Hansen (Krista’s boyfriend, played by Armand Schultz) and stealing his dog Flipper. At arraignment, Elliot goes against his agreement with his attorney (to plead not guilty), pleading guilty and subsequently being sentenced to 18 months. He ends up serving ’round about two and a half months. His early release is chalked up at the prison to the chaos that 5/9 has caused–with the financial system in limbo, prison funds have been cut and more non-violent offenders are being released than ever before.

Before his release, we get a look at his real life in prison: being processed in, meeting Leon, his routine. And that’s it, he tells us. That’s everything he kept from us. 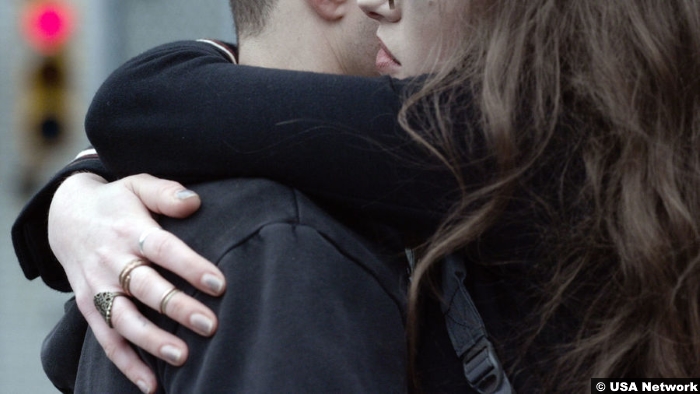 Darlene is waiting for him outside. She hugs him and perhaps to our surprise, she hugs him back. They have a Lost in Translation moment where she says something to him that we can’t hear and then as they board the subway, she gets him up to speed on what he’s missed. To wit, her Dark Army contact (Cisco) was chatting with them on IRC about “Stage 2” and Trenton and Mobley are MIA. Trenton’s parents have reported her missing.

After visiting his mother, who is catatonic in a nursing home, Elliot and Darlene pay a visit to Cisco. Yep, he survived the bat to the face, but he’s unsurprisingly still sour about it.

Meanwhile, Whiterose, light of my life, is visiting the grave of the last CEO of E Corp, and urinating on it. She is a delight. 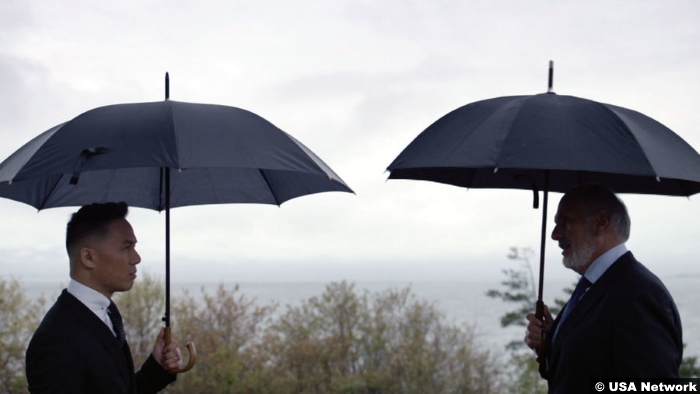 She is not, however, delighted by her meeting (in drag) with Philip Price. He breaks the news about the failure of the bailout and its effect on the Washington Township plant, which will close. He practically skips when he tells her. Whiterose, on the other hand, is predictably livid. It’s still not clear why that plant is so important to her, though. Price suggests that the Chinese government could supply a bailout, build some goodwill with the United States, and oh, of course, save the plant. Whiterose agrees to bring this plan back to her government, and makes a veiled threat against Price, which she had done at the gravesite as well. Price laughs it off, explaining that he doesn’t mind losing if it means that Whiterose doesn’t win. He also tells him, “I will rain chaos” and that order–WR loves hacking time–won’t protect her anymore.

It’s a refreshing scene in an episode where people say so little of what they mean and/or really want to say. This failure in communication is paralleled with fsociety’s hack of Whiterose underling Xun’s phone. They turn on the mic and everything is fed through a laptop voice translator, which spits out text in English and makes everything read like bad subtitles.

Elliot wants a meeting with Xun, which Cisco arranges, so that he can get to the bottom of Stage 2. Xun is none too pleased to find Elliot at the meeting and walks out almost immediately, but not before Elliot tells him that he wants to know what Stage 2 is. Later, when Xun meets with Whiterose, with Darlene listening in, Whiterose is confused because Stage 2 is Elliot’s plan. Elliot has been off the whole episode, as he seems to undergo fits of depersonalization where he and Mr. Robot are mixed. Price’s comment about order seems like a pointed (unintended) reference to Elliot, as well.

All of this is startling enough for Darlene (and the city-wide brownouts that have started make everything even creepier), but then she gets her own knock at the door. We don’t find out who it is.

Cisco has gone back to the smart house to retrieve a VHS tape Darlene forgot. They’ve got to get it back because Darlene’s face is on it. He discovers something at the smart house that seems to shock him, but again, we don’t know what it is.

The only thing someone sees that we see as well is upon Elliot’s return to his own apartment. He’s stunned when he spots Tyrell’s SUV outside. Upon approach, though, it’s Joanna in the vehicle.

He’s not the only one with an expected visitor, though, as Angela finds Dominique at her door. Angela has just returned from a trip to the offices of the Nuclear Regulatory Commission, where she tried to turn over data related to the Washington Township plant’s leaks. The vibe at the office was unnerving, making Angela take back her plans. She’s starting to worry about E Corp’s reach, outright asking Agent DiPierro if she’s working for “them.” The agent brushes her off and gets to her point, which is that Angela can talk to her or she can wait for her own stage 2, which is her getting snatched from the street and incarcerated. Angela asks her to leave, which she does, and one has to wonder why she opened the door in the first place. On this show, you never know if it will be the wolf at the door, but it usually is.

8/10 – The return to Elliot’s real life (and the return of Whiterose) was satisfying, but the someone sees something, but what? scenes were tiring.