This week’s episode of Mr. Robot goes by in a flash, despite not being nearly as action-packed as say, last week’s. It’s also one of the most inventive episodes of the series, jettisoning storytelling for nigh on twenty minutes for a bonkers out-of-body sequence that draws its inspiration from 90s sitcoms. Whatever happened to predictability?

The episode begins with a very old-school promo for USA (it’s Word Up Wednesday!) and then Elliot finds himself in that retro sitcom with his nuclear family. The graphics and opening credits are all Full House or Family Matters, but the subject matter is like an even darker Married…With Children. (So, like Too Many Cooks.) The Aldersons are on a family road trip, with a bound Tyrell starring as “Man in the Trunk.” As the canned laughter and Tyrell’s banging in the trunk serves as a soundtrack to Elliot’s confusion, little distractions keep popping up. There’s Angela at the convenience store! There’s Gideon as a cop! And cue the applause, because Alf is the special guest star. Elliot keeps trying to watch footage of himself being beaten by Ray’s thugs, footage that shows up in the car’s side mirror and in Darlene’s Gameboy, but his father keeps derailing him. Elliot can’t understand him. This is all fake. He concludes that Mr. Robot has finally taken over. It isn’t until Mr. Robot drops Elliot off at the hospital and we switch to real life, where Elliot really is in the hospital, that it becomes crystal. The whole farce was a protective measure to save what’s left of Elliot’s fragile mind (and in doing so, protect Mr. Robot, who lives in Elliot’s mind). 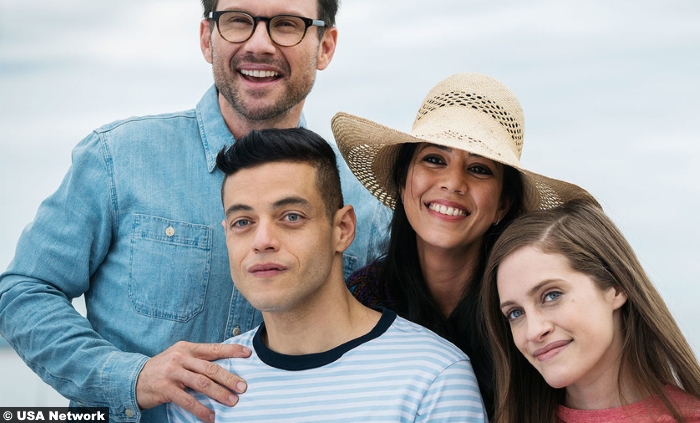 [Sidenote: The whole retro sequence was extraordinary, including the vintage ads, real and manufactured, that aired. And as the old USA graphics came up, I had a flashback to the many, many times I watched USA’s Up All Night. It was included as part of the ad block. This week’s movie is The Careful Massacre of the Bourgeoisie, naturally. Speaking of 80s movies, there was an excellent Heathers reference when Darlene asked Elliot, “What’s your damage?”s]

And we’re back to Word Up Wednesday, where the word is master. That’s who Ray is to Elliot now, according to Ray. Well, technically he tells him a story about his dog Maxine, but that’s the gist. Elliot is Ray’s pet now, dependent on him for life. Later, the goons come for Elliot again, removing him from the hospital bed and locking him in another, much less comfortable room. There he embraces and thanks Mr. Robot for saving his mind. And here it seems a lifetime ago that Elliot was talking about how nice Ray is. Mr. Robot was right on–lies make the world go ’round.

Also lying a lot this week is the core fsociety, now starring Angela. Trenton doubts that Angela will be able to learn the code in the less than 24 hours before she returns to work, but she’s never seen Angela stare dead-eyed into the darkness as she recites self-help maxims. Even the arrival of Cisco, whom she clearly remembers from the CD hack last season, only briefly shakes her. [In Cisco’s other scene this episode, he picks up a piece of equipment from the Dark Army for the FBI hack, gets a little too mouth, and gets a syringe inserted under his fingernail for his troubles. Too bad he didn’t get a sitcom distraction.] 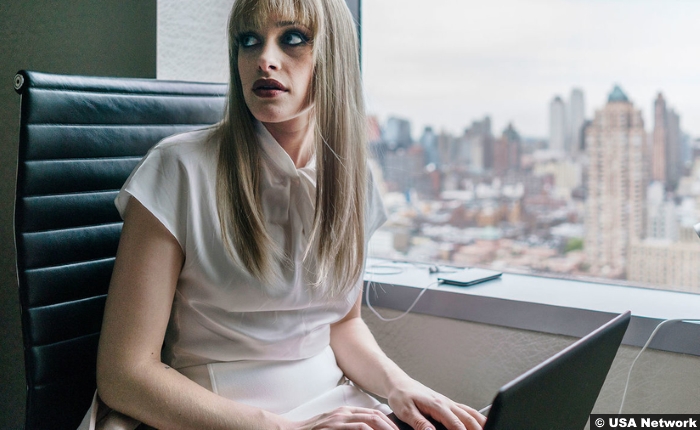 And indeed, executing the hack the next day is almost too easy for Angela, whose biggest obstacles are someone coming into the bathroom when she’s on the phone with Darlene and being caught on that restricted floor by an amorous FBI agent. After a few tense moments, she finally ditches him, the fsociety hack a success so far. 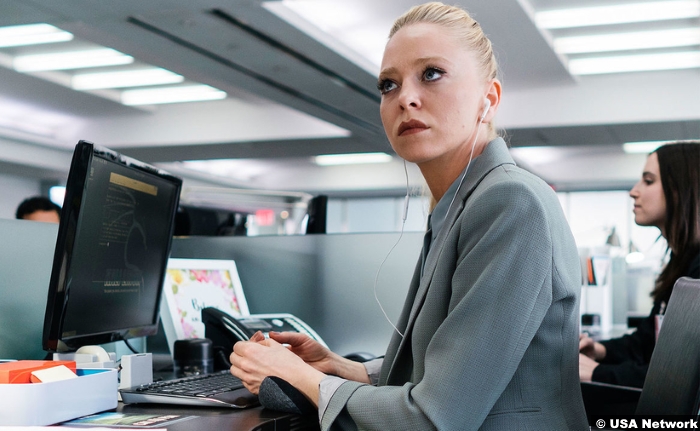 Oh, but wait–the wifi’s down. Darlene directs Angela back to her desk to begin fixing that issue and it’s tense again but manageable. At least until Dom shows up at her desk wanting to ask questions. The FBI agent is supposed to be on 4 weeks leave following the shootings in China, but she outright refuses to take a break, not when she’s hot on the trail of the Dark Army and to a lesser extent, fsociety. The trail just just warmed up, but Angela’s the only one who can feel the heat. Until next week.

8/10 – The Too Many Cooks-esque sitcom beginning will likely prove to be controversial, but I was charmed by it and by the spy movie style of the hacking scenes. However, we’re at the halfway point of the season now and it’s time to start tying these storylines together.