It seemed a little frustrating when the episode begins with a flashback to Mobley and Trenton’s meeting, but that’s what we got. They met at a coffee shop, both there to meet someone, who turned out to be Elliot. Elliot didn’t show, but Darlene appeared in his place. Before she got there, Trenton conned Mobley into letting her hack his phone.

Back to the future and the remaining core members of fsociety are holed up in their headquarters at Susan Jacobs’s smart house, sifting through the data from their FBI hack. Last week, they stumbled upon something and this week, we get to see what it is: a conference call to discuss the Berenstain operation. Fsociety listens in and tapes the call, where they uncover a bombshell. In the course of the Berenstein investigation, the FBI is spying on three million people. Get out the mask, because it’s time to make another video. 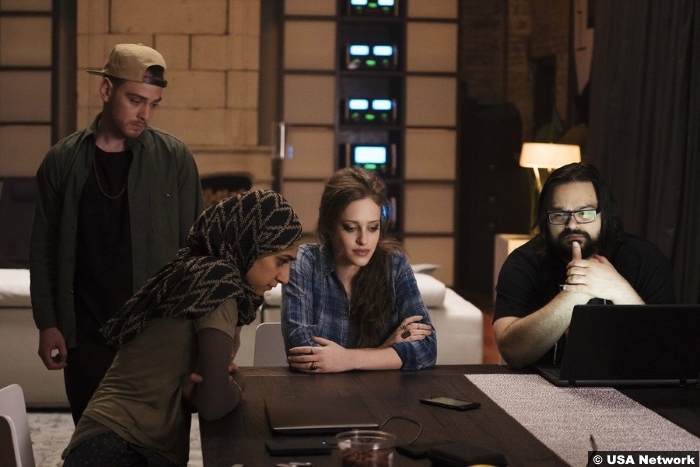 It’s Trenton who’s the first to notice. Susan Jacobs has come home. This isn’t a surprise to viewers, because her appearance in the “Previously On” montage foreshadowed her return. But is it a surprise to Darlene? She says that she should have been keeping a better watch on the GPS (that they were presumably using to track Susan), but is this what she wanted all along? Is this who she is?

I ask these questions about identity because they’re echoed in the other plotlines this episode, including a rare look at Trenton outside the group. Angela’s out on a date at a rather depressing karaoke bar when she runs into a friend of her father’s. He’s scornful about her and her job at E Corp. He asks her who the hell she thinks she is. He tries to make her feel small. She tells him that he’s a sixty-year-old plumber. who’s done nothing more with his life than that, while she’s twenty-seven and making six figures. And she’s only just begun. That’s who I am, she tells him. Then she sings “Everybody Wants to Rule the World.” And while it’s nice to watch Angela stand up for herself, the scene with her dad’s friend is as ugly as the one last season with Elliot and the poor Bill from Steel Mountain. Angela may be just pretending at E Corp, but you know what they say about that.

At the bar, she’s hit on by an older man, whose affections she returns. I’d say that it’s too bad for her date, but he’s an FBI shill, anyway. Back at the Bureau, Dom tries to make him feel better about not cracking the Angela egg, about not figuring out who she is, but he’s done with it. It feels gross to him.

In the smart house, they zip-tie Susan to a railing in her pool room. She won’t stop caterwauling, so Darlene sends Trenton to quiet her down. Susan needs to go to the bathroom, so Trenton frees her and starts leading her out of the room. At first, it seems that Susan is trying to appeal to Trenton, when she asks if she’s Muslim, but it’s just a warm-up to calling her (and either Muslims everywhere or fsociety–or both!) animals. She lunges at Trenton, who dodges out of the way, causing Susan to hit her head on the tile wall and knocks herself out. Now we’ve got a bigger problem.

Fsociety combs through Susan’s data, looking for something they can hold over her to keep her quiet so they can take her to the hospital and let her go. They find something–an illicit relationship with a judge–but it’s only Darlene who understands how little it means. Because when she goes, alone, to confront Susan, she reveals the depth of her hatred for the attorney, the “Madam Executioner” of E Corp. It was Susan who got E Corp off scot-free, who made sure that no one ever paid for Mr. Alderson’s death. Darlene has been nursing that hate for years, for what? Nearly two decades? This monologue, in which Carly Chaikin is flawless as always, seems to prove that fsociety wasn’t so ill-prepared as to not predict that the owner of the house would return. Darlene designed it that way. Susan seems to pick up on this, if only subconsciously, because she admits defeat. “You got me,” she tells Darlene, before asking where they go from there. “I’m sure we can figure something out.” Darlene responds that she already has, before zapping her with a stun gun that sends Susan into the pool.

Later when Darlene is liesplaining that Susan “flipped out,” Mobley mentions her heart condition and can’t believe Darlene never came across that info when they were riffling through Susan’s stuff. The group is in a state of shock, no more so than Darlene herself. It’s not that she’s shocked that she killed Susan. It’s more like she’s shocked that she isn’t shocked. We can see the blank affect when she and Cisco dispose of the body in a veterinarian’s incinerator. 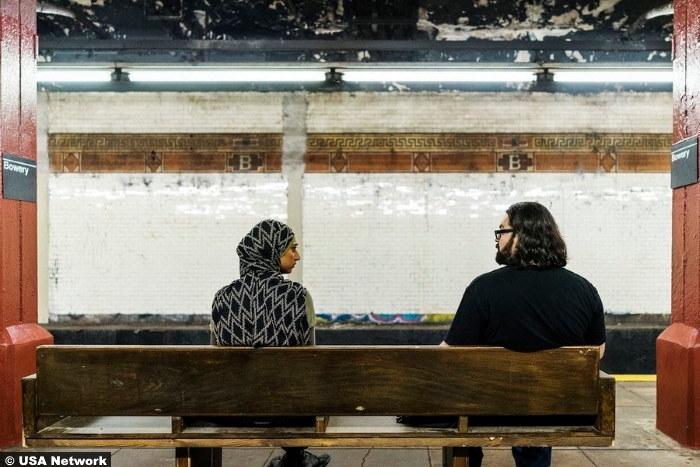 Actually shocked are Trenton and Mobley, who are finally ready to face up to what the 5/9 attack actually did. As Mobley says, “What we did was colossally fucking stupid and we can’t afford not to realize that anymore.” The world is not better for having been hacked and with Elliot indisposed, there’s only his successor to steer the ship and she’s got one foot in the Rubicon. Without her, Trenton and Mobley succumb to paranoia, which in Mobley’s case is warranted when he’s swept up by the FBI. They hold him for 12 hours, but have to let him go because, and he doesn’t know this, they don’t have anything on him. Just that flyer for the End of the World party advertising DJ Mobley. He texts Trenton that they’re burnt and to meet him at the first place they met, but even after two hours, he’s a no show. Trenton is left at the episode nervously watching the door. 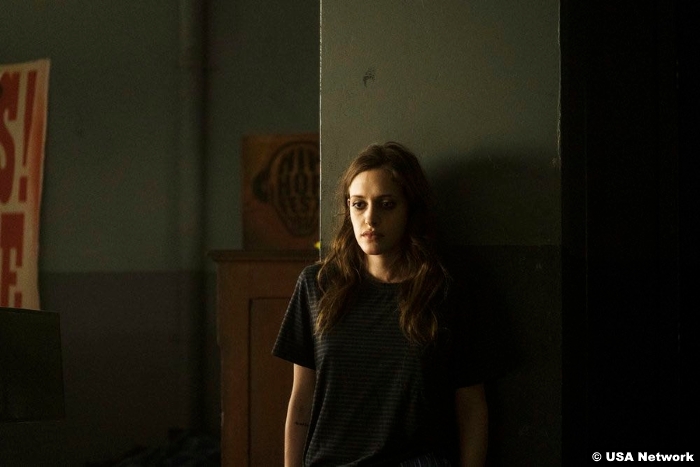 Meanwhile, at Cisco’s, he’s in the shower when Darlene succumbs to her own paranoia and checks out his laptop. What she finds are a series of messages between him and the Dark Army, letting them know that he has her, while they tell him that “stage 2” is about to begin. When he exits the bathroom, he finds his laptop in pieces on the floor. And he finds Darlene, her expression as blank as ever, swinging a bat at his face. If the beginning of the episode was frustrating or even boring, the end certainly wasn’t.

9/10 – A week after that disappointing reveal, Mr. Robot comes back with a zap and a bang in an episode that smartly relies heavily on Carly Chaikin’s Darlene, that little catalyst for all kinds of interesting events.