After losing some momentum last week, Mr. Robot gets back to form this week with an episode that not only picks up the pace, but also starts bringing Elliot back into the greater fsociety fold.

You may not believe that at the beginning of the episode, which begins in the past. It begins with a knock at Elliot’s door, but don’t get your hopes up–it’s not that knock. Instead, it’s Darlene, showing up at Elliot’s apartment one Halloween with a very familiar mask, found in a Chinatown shop. The mask is a reproduction of a prop from a (fake) 80s horror movie they loved as kids called The Careful Massacre of the Bourgeoisie. [You may watch a snippet of it here.] If you couldn’t tell from the title, it’s a delightful little romp wherein the rich are slaughtered. One rich boy wears the mask, which is then…redistributed. After they watch the movie together, Darlene urges Elliot to put on the mask, which he does, rather sheepishly. He also happens to be wearing his dad’s Mr. Robot jacket. And just like that, fsociety is hatched. 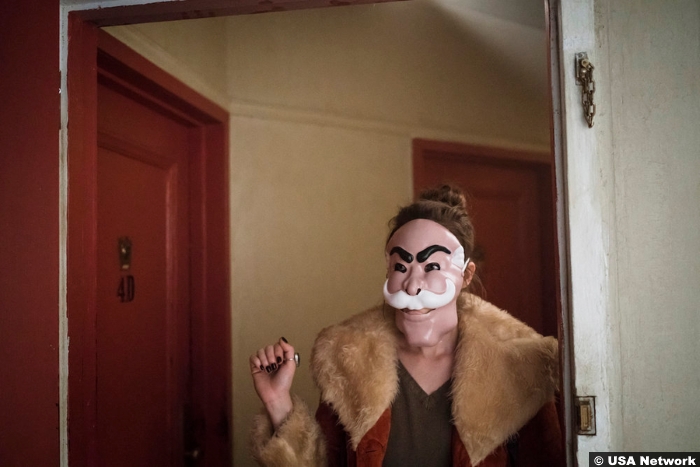 This scene gives little hints about the way Elliot was even before fsociety existed. Darlene pinpoints the movie as the root of their “psychological dysfunction,” but of course, there’s more to them and their problems than a movie. During their conversation that night, we learn that Elliot lost the job he had before Allsafe because after being (purposely) locked into a server room by his coworkers, he destroyed the servers. That’s a little more dysfunction than one can blame on a movie.

Later in the episode, they will meet in the present day, in a scene that gives credence to the already-discussed theory that Elliot is in some kind of lockup. Darlene tells him, “I will never understand why you did this,” a line that is just vague enough–not “I will never understand why you moved back home, moved in with mom, etc.”–for fans to believe that Elliot is in some kind of psych facility or halfway house. Her presence in both scenes serves as a catalyst for Elliot: the first time, she (consciously or not) pushes him into creating fsociety, and the second, to go back online. 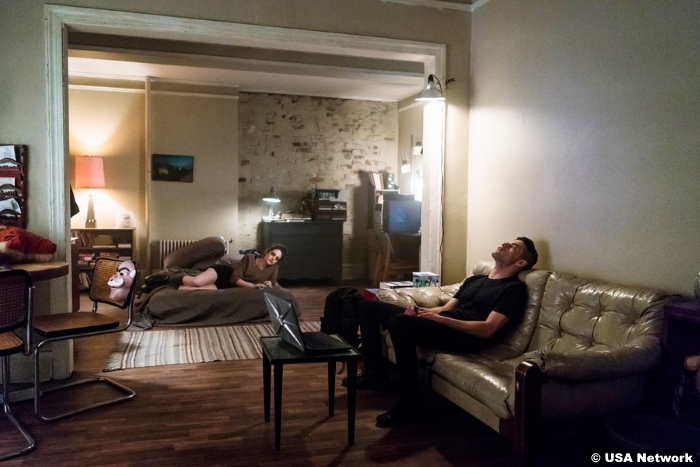 Darlene wants him to look into the FBI’s investigation concerning them (Operation Berenstain), which she learns about during a bar bathroom tryst with her ex-boyfriend Cisco (Michael Drayer). You might remember from last season that he has ties to the Dark Army, the mysterious Chinese hacker group allegedly fronted by the most mysterious Whiterose (BD Wong). Fans who were hoping that the Dark Army references were a clue that Whiterose would be appearing soon didn’t have to wait at all, because here she is. And she’s meeting with Philip Price again! This time, as opposed to their meeting in last season’s finale, she’s looking more like herself. We also get a later glimpse of her dressing room, which I want to live in. There, she instructs her assistant (paramour?) to keep an eye on Berenstain and mentions an “e-coin strategy,” but with Price, she discusses, among other things, the need for “the plant” to stay open. The e-coin talk is as boring as Bitcoin talk is to me IRL, but I’m intrigued by the talk of the plant. Is this the same plant that poisoned the original Mr. Robot and Angela’s dad?

If so, it comes up again in our time with Angela this week. She’s trying to ferret out Price’s interest in her and she thinks it has something to do with the class action suit against E Corp, so she makes a play. She wants a better office and someone else’s job in exchange for removing a slice of the suit, specifically the part about third party oversight of the plant. She’s playing at chess and like Elliot’s games against Mr. Robot in this episode, she comes to a stalemate. Price shrugs off both her and her suggestion that he wants leverage over her, but she tells him she knows she’s not wrong. This seems to be true, at least judging by his conversation with Whiterose, in which she mentions a “her” that seems can only be Angela. Whiterose was questioning why Price was putting his faith in “her,” but we’ll have to wait and see what he’s playing at.

In the other minor plot, Joanna Wellick (Stephanie Corneliussen) is running low on funds and wants Scott’s help in getting Tyrell’s severance package. He’s like, “I’ll get right on that as soon as your husband pays for killing my wife.” 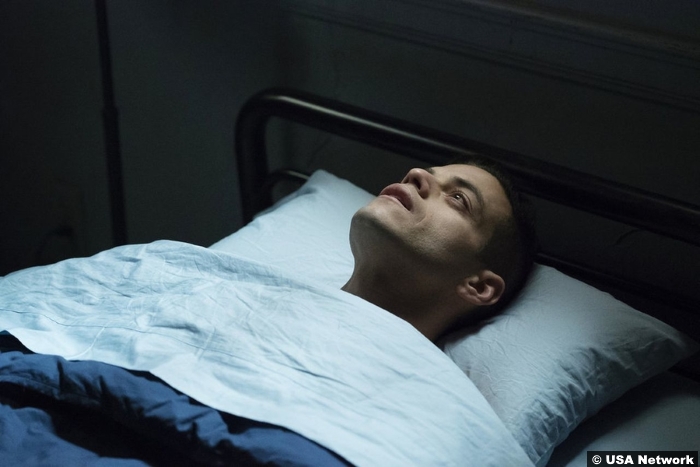 Back in Elliot’s world, after a dream sequence in which he visits with old friends and makes amends with other people, including the Steel Mountain employee he brutally humiliated last season, he goes to see Ray. Ray has been extolling the virtues of confession, so Mr. Robot is livid as Elliot walks in, assuming he’s going to confess his sins. Instead, Elliot is there to help Ray with his mysterious computer problem, which is something that involves Tor. Elliot will get to that, probably, but he’s mainly on the computer to log onto the IRC channel he and Angela use to communicate. She tells him about Berenstain and the possibility that the FBI is running surveillance on them, prompting Elliot’s boldest move yet (this season). “I’m hacking the FBI,” he happily tells us and Mr. Robot, or at least as happily as Elliot can be. So much for staying offline.

9/10 – Carly Chaikin was the MVP of this episode, the best episode of the season so far. By being the catalyst for Elliot getting back into the swing of (hacking) things, she gives the show momentum. It might be tempting fate to hack the FBI–gaze long into the abyss and…you know the rest–but it certainly makes for more interesting television. Also, Chaikin is great* and should be in more things, period.