Welcome to our coverage of Mr. Robot! I’ll be here every week, fighting the urge to make Hackers references. When we left the show at the end of last season, fsociety had hacked the planet, crippling E Corp and wreaking havoc on global financial systems. We didn’t actually see the moment happen, but we saw the aftermath. The season premiere brings us back to that moment and the mysteriously disappeared Tyrell Wellick (Martin Wallström) before immersing us all in Elliot’s (Rami Malek) new analog routine. 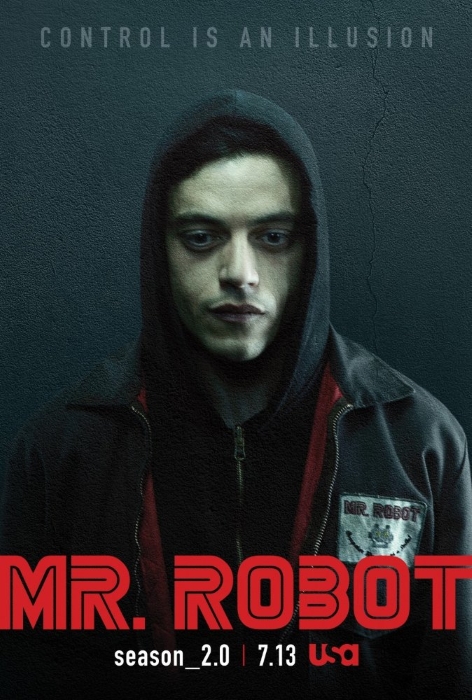 In the season finale last year, Elliot took Tyrell to the Mr. Robot HQ and after a brief moment there, we rejoined Elliot three days later, in the aftermath of fsociety’s disruption. This time, we begin by going back to that moment at Coney Island and our only look at Tyrell the entire episode. [Although these were technically two episodes with a seconds-long intermission, the playing time is really more like an extended episode, so that’s how I’m treating it.] We learn something definitive–it was Elliot that ran the program–and maybe learn something disturbing. As Tyrell is watching the code do its thing, Elliot casts a meaningful look at the popcorn machine, where Darlene (Carly Chaikin) hid her gun. Could that be why no one has heard from Tyrell? 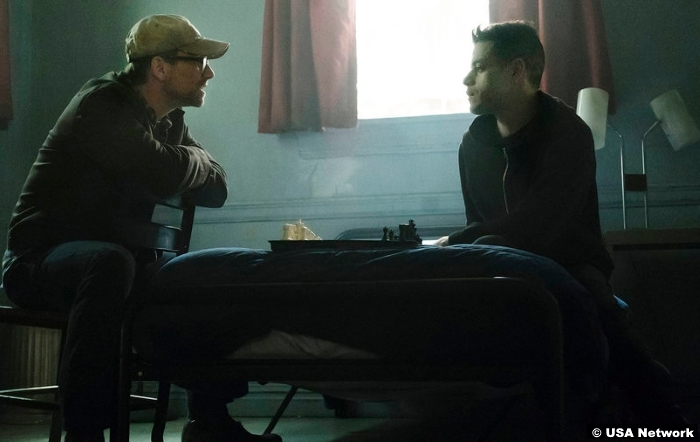 After this flashback and then another flashback to when Elliot went out the window as a child, we join Elliot already in progress, safely cocooned in routine. It’s about a month after what the world is now calling the 5/9 Attack. He eats three meals a day with his new friend Leon (Joey Bada$$), who just got into Seinfeld and who may or may not be real. The rest of the time, he cleans house, meets with his church group, and journals, with occasional breaks for arguments with Mr. Robot. This is when we learn that Elliot doesn’t know what happened to Tyrell, either. When he tries to get the answer from Mr. Robot, he shoots Elliot in the head. Again. 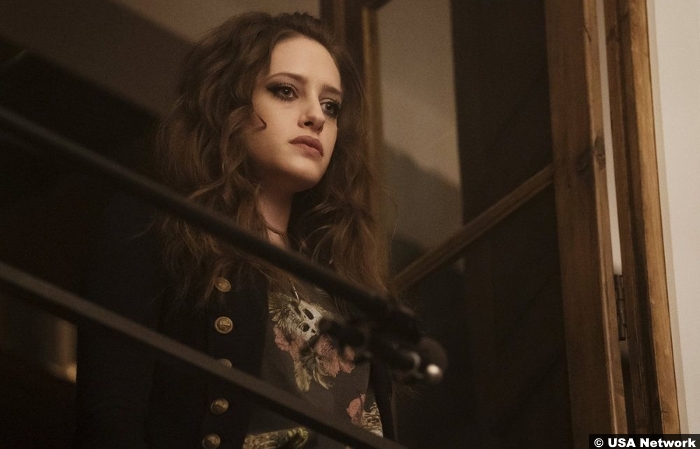 Doing only slightly better is Darlene, who’s now the de facto head of fsociety, which has grown, and attracted bro types. They’ve now taken their show on the road, staging silly stunts like sawing off Charging Bull’s balls. Their other bold move, besides setting up camp in the E Corp counsel’s house, is unleashing ransomware on the corporation computers. They demand $5.9 million in cash, delivered to Battery Park by an E Corp “chief.” CTO Scott Knowles (Brian Stokes Mitchell) volunteers. The scene in the park, set to Phil Collins’s “Take Me Home,” and shot in front of the Freedom Tower, is a stunner. A bike courier delivers a message–the fsociety mask, with a note to put it on and burn the money. And so he does and somehow no one tries to snatch a lightly scorched bundle. They just all watch and record, like this is an episode of Black Mirror.

Speaking of things that are unnerving, Angela (Portia Doubleday). That steely power she displayed last season when she bought shoes to replace the ones soaked in an E Corp chief’s blood has only strengthened. She is really leaning in in her PR position at E Corp, dismissing coworkers and Bloomberg News alike with the same dead-eyed intensity. You don’t know what’s worse, her new lease on life or Elliot’s. While she sits in the dark at night, repeating affirmations, he drowns in himself in sameness, and both of them are desperate to believe that control is not an illusion. 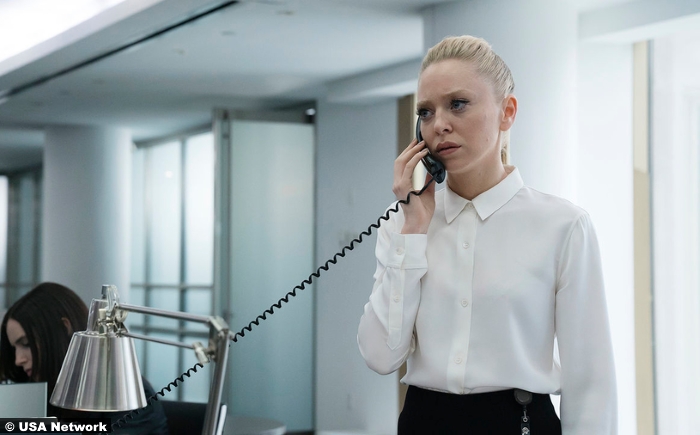 But the cracks are starting to show for Elliot already. During his daytime routine with Leon, they watch basketball at the park. One day, a new person sits down with them. This is a variation from the routine, a bug in the system. Ray (Craig Robinson) wants to be Elliot’s friend, but of course, this makes Elliot suspicious immediately. It doesn’t get any better later, when Ray refers to something Elliot and he discussed the night before, when Elliot was supposed to have been sleeping. Control is an illusion.

Something else Elliot can’t control is Gideon (Michel Gill), who has connected the dots between his former employee and the 5/9 Attack. As the head of AllSafe, Gideon himself has been implicated as a player in the hack. But of course, some people take that bit about illusions a little too far. A man Gideon meets in a bar calls him a patsy–shades of Lee Harvey Oswald–and a “crisis actor,” before finally shooting Gideon in the neck. Did Elliot have this done?

And while we’re asking questions about Elliot, how much of what we see of the routine is real? I bring this up, because there’s already a strong fan theory that Elliot is actually in prison. If you recall, the last thing we saw last season was Elliot answering a knock at this door. The theory goes that this was the fuzz. Over and over again in Elliot’s scenes, we see bars in the background, whether in the wallpaper or on fences. When Gideon talks about laying off Allsafe employees, he says they’ve been furloughed. Ray, whom according to the theory is possibly a guard, refers to the basketball players as “killers.” And so on. It’s a good theory, but I’m not sure I’m totally convinced. Maybe it’s prison or maybe it’s rehab. Maybe it’s the nervous hospital. Or maybe it’s none of the above. Let me throw together another evidence wall–I’m still working on my American Gothic one–and think on it.

Finally, although we get only that glimpse of Tyrell, he hovers over the entire episode, as like Gideon, he’s also believed complicit in the attack. In a neat bit of technical wizardry, he’s even called out by name by President Obama. (He’s also mentioned by Nancy Grace, but unfortunately she doesn’t give him one of her trademark bonkers nicknames, like “Tot Mom.”) And Elliot still doesn’t know what happened with him. But when he gets a phone call at episode’s end, that sure does sound like Tyrell’s voice on the line. “Bonsoir, Elliot.” It remains to be seen if Elliot will go gently into that good night, or if Tyrell already has.

8/10 – Season two is off to a fantastic start with this doubleheader.