Now here we are, the finale of Penny Dreadful season 3, which in a surprise twist turned out to be the series finale. It’s been a very good but frustrating season, since so much of it kept the characters apart, particularly Vanessa and Ethan. And now it’s all over. But before we get to that, let’s check in on what happened before The End.

Ethan, Sir Malcolm, and Kaetenay make it back to London just in time to see what looks like the end of days. An apparently permanent fog has fallen and the city is crawling with enough night creatures–rats in the street, frogs popping up from drains–to make one think the plagues are here. And as Catriona, in Sir Malcolm’s mansion but without Vanessa, tells them, there is a plague. Thousands have died in London just that week from whatever is in the fog.

Meanwhile, Dr. Seward walks in on Renfield in her office listening to her recordings of her Vanessa sessions. He’s gone full Renfield now, babbling on to her about his master, Dracula, who has Vanessa with him now. Somewhere in there he eats a frog, because of course he does. He’s unafraid of Dr. Seward, partly because he’s lost his religion and partly because he assumes she’s no killer. “You should have listened to more of the recordings,” she tells him, before she dispatches him with the help of Victorian office supplies. Then she heads off to Sir Malcolm’s mansion, where vampires are attacking and we’re just cauterizing the bite wounds, because we don’t have time to be turned. 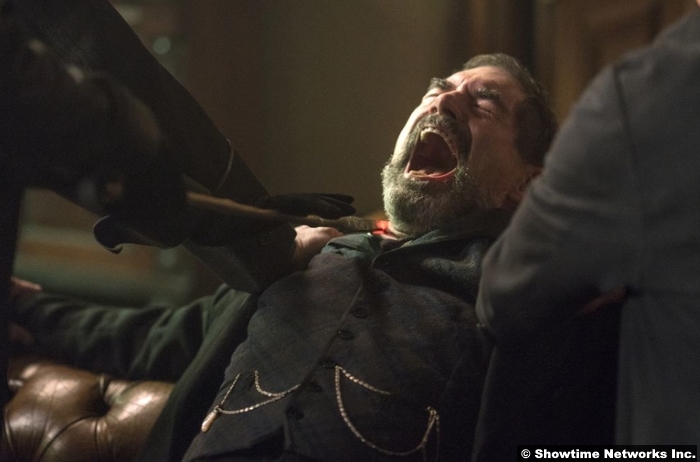 Down in the bowels of Bedlam, Lily fails in her attempts to manipulate the two men in her life. Dorian, on his way to kick out the girls in his house and snap Justine’s neck, leaves without kissing her and Victor is unmoved by her plea for water. In the end, what does move him is her genuine self. In the last episode, she was seen visiting the grave of Sarah Croft, an infant who was presumably hers. Sarah froze to death in their home because Brona was beaten by a john and left for dead in the street. She asks Victor not to take her memories of her daughter and that’s what makes him relent. Billie Piper does astounding work in this scene. Eva Green is (rightfully) singled out often when it comes to the acting on this show, but Piper must be recognized for her work as well. She’s electric when it comes to delivering monologues like this one and the one she gave at Dorian’s last week. 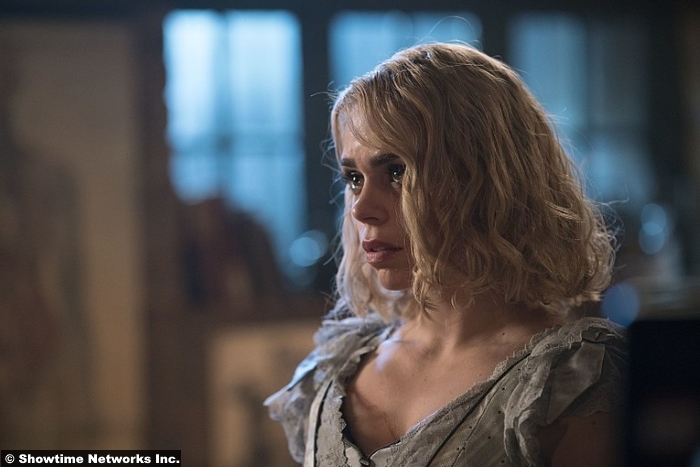 This conversation takes place between just the two of them because Dr. Jekyll has left them alone to wander off and do whatever, which pretty much sums up his character this season. Just a lot of whatever. He never takes his own medicine. His father has died, though, and so he inherits his title, making him both Dr. Jekyll and Lord Hyde. Good and evil braided be.

Elsewhere and not getting a happy ending is John Clare, unfortunately. His son dies, and while his wife wants to take Jack to Dr. Frankenstein to be reanimated, Clare can’t do that. He spares his son the same fate he’s suffered and buries him at sea. Having been rejected by his wife, poor John Clare leaves her to walk alone.

And that leaves us with the fate of Vanessa. To say it all seems to happen so fast is an understatement. We went from Vanessa going to kill Dracula to becoming a bride of Dracula to resigning herself to a doomed fate in a week. And when I say doomed fate, I mean Ethan’s gun. After a season apart, they are finally reunited in a tunnel underneath this city of fog and pestilence only so Ethan can kill her. Because she can run, but the creatures of the night will never stop hunting her and because she made all this happen, “brought this terrible darkness into the world.” Only her death will bring peace on earth [CITATION NEEDED]. And so Ethan puts a bullet in her, then carries her out. 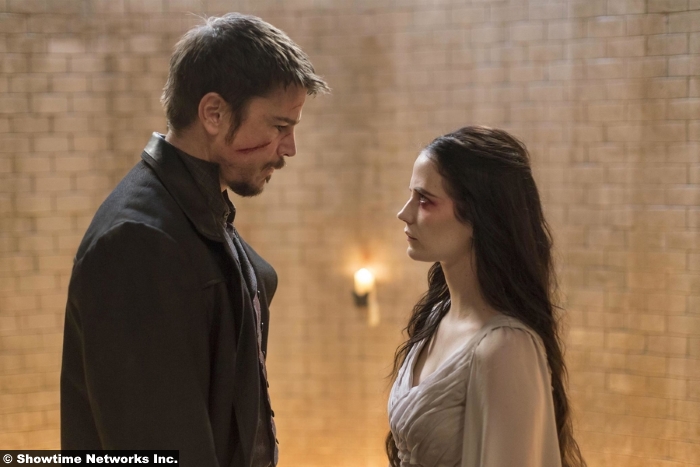 Penny Dreadful was an ensemble show, but it would not have been the same without our Miss Ives and more importantly, Eva Green portraying her. She was magnificent: beautiful as the moon and with an unnerving power like the tides. Once again, it’s a shame that the Emmys rarely reward genre, because her work on this show was flawless. It’s really a shame that the show couldn’t build an ending worthy of her. Vanessa Ives may be Victorian, but to put it in a modern way, she slays. Having her be absent from much of the finale only to show up just to die feels like a short change and almost robs her death of its full impact.

9/10 – Breaking with (my season-long) tradition, I’m judging the series as a whole. It’s a magical world, with gorgeous set pieces and a storyline that could have come off silly in lesser hands, but they–John Logan, the writers, and of course, the cast–made it compelling. However, it could often be frustrating in the way that it treated some characters, including Sembene and Dr. Jekyll–introducing interesting characters only to do little with them. But in the end, the good parts outweigh the bad, and I will miss the Sad Victorian Monster Squad.

Oh, yeah, and Kaetenay is a werewolf. Speaking of storylines they could have done more with.