Penny Dreadful S03E05 Review: This World Is Our Hell

After last week’s Vanessa-focused episode, we don’t see her at all this week (BOO!) and instead, we spend time with other members of the squad, especially Ethan, who’s back in black. “Back” being the operative word this week.

As William Faulkner wrote, “The past is never dead. It’s not even past.” And so it goes with this week’s episode, in which we get some forward movement, but a lot of looking backward. Along with Vanessa, John Clare and the gang at Dorian’s are also absent this week. The majority of the episode centers on Ethan’s storyline, as he and Hecate make their way through the desert. They are still trailed by Rusk and the marshals, as well as My Two Dads, Sir Malcolm and Kaetenay. They are on the way to Ethan’s actual dad, Jared. So many dads in this episode!

With all this focus on Ethan, we finally get some more answers about him and his past. In season one he told Vanessa, “There are such sins at my back, it would kill me to turn around.” This week proves that statement wrong, or at least the second part. But of course, Ethan’s been through a lot more trauma and tough times since he said that.

Before we get back to that, though, let’s check in with the only other characters outside of the New Mexico territory to appear in this episode: the Doctors Frankenstein and Jekyll. Having shown Victor his serum and its limited effectiveness last week, this week finds Henry letting Victor juice it up with electricity. The methodology for administering the serum is much like before, with the unfortunate Mr. Balfour strapped into a chair and the serum, now electrified, given via syringe. I don’t recall it going into his eyeball before, but perhaps that’s such a delightful image that my mind erased it so that I could enjoy it again. 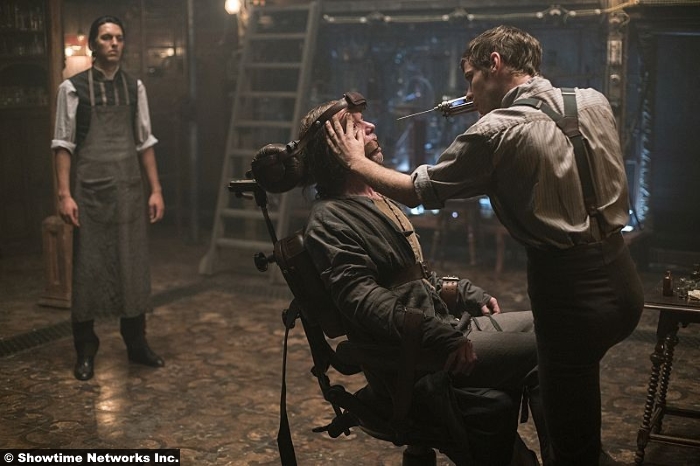 As with Ethan’s storyline, this sojourn with the doctors also touches on the past or more specifically, how we deal with that. It’s clear that Henry still carries a lot of anger about the way he was treated in school. He’s frustrated with Victor, who looks back on their shared past as if they shared the same problems, which they didn’t. Victor’s never been called a “wog,” after all. Dr. Jekyll’s intentions with the serum tend more toward an Eternal Sunshine of the Spotless Mind–wiping out all his bad memories–while Victor, clearly, still sees himself as a savior. He assures Mr. Balfour that everything will be sunshine and lollipops when he wakes, and he probably believes that, because Victor never learns from the past. So when Mr. Balfour wakes with no memories, Victor, of course, puts that down in the win column and it will never go wrong, because nothing Victor has created ever has.

Rusk, being not delusional, has learned something from the past and  in turn, we learn something about him. The marshal asks how he lost his arm and the story involves a Boer assassin Rusk and others were tracking, presumably during the First Boer War. The important part of the story is that Rusk was so determined to get his man that after an ambush–the part where he lost his arm–he cauterized the wound, left his surviving comrades behind, and didn’t stop until he captured his prey.

That man may have had a part in orchestrating an ambush, but unlike Hecate, he did not have the power of witchcraft behind him. She explains to Ethan while they’re stopped and on their way to dying of thirst, that she was enlisted by her mother into Lucifer’s service as a 5-year-old. And suddenly so much about her makes sense. Ethan was also enlisted by a parent, but his was his father, who enlisted Ethan into the army. Ethan went along with it to make his father proud, but ended up becoming a savage in the army’s fight against the Apache. After a particularly brutal slaughter, Ethan shot his commander and surrendered to the Chiricahua. Specifically, he surrendered to Kaetenay, who as we know, refused to kill him, preferring that Ethan fight the army, instead. As Ethan tells Hecate this story, which precedes his acquiescence to her ruling-the-world-together plan, Kaetenay is also telling it to Sir Malcolm. Unfortunately, the latter pair decides to become horse thieves, stealing the marshal and company’s horses, just as Hecate magics up some snakes to attack the lawmen. Kaetenay is bitten by a rattler. 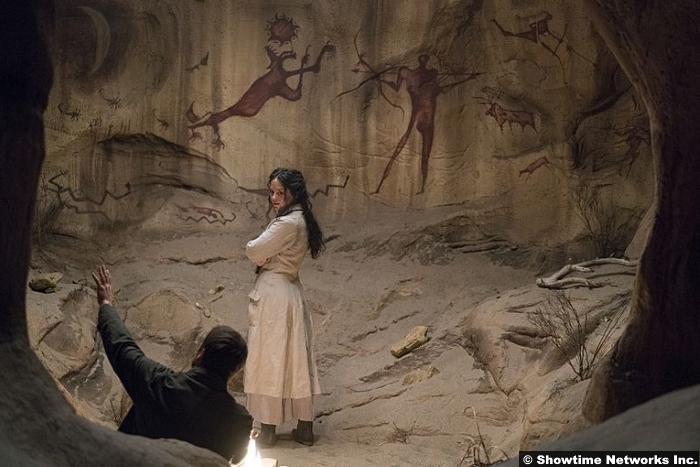 The sneaky snakes have solved the law problem for the moment, but Hecate and Ethan still have to deal with that not dying thing. Before they can solve this, they take shelter in a cave. Ethan narrates the story the cave paintings tell, the story of the first Apache or the story of the beginning of the world. Then he tells her about the sins at his back. The Apache needed weapons and other supplies. Ethan knew where they could find them. It was his father’s house. His “Apache father” promised no shots would be fired. He lied. 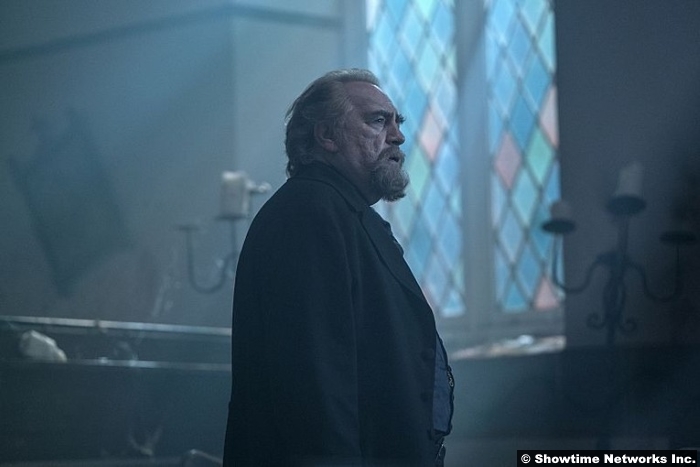 We learn the full details of that lie the next (?) day, when a near-death Ethan and Hecate, along with Sir Malcolm, are captured by Pinkertons and taken to Ethan’s father. Poor snakebitten Kaetenay is left to die in the desert. Ethan’s father Jared (Brian Cox) tries to grill Malcolm for the details on what exactly they’ve been up to the past year–finding a daughter, definitely not killing monsters–but his main event is punishing Ethan. Seems he’s kept everything as it was the night the Apaches came. It also seems New Mexico has a long history of people who do not believe in half measures, because Jared describes the atrocities that occurred that night and let’s just say it was a little over the top. A bit much. The point is, though, Jared wants Ethan to repent or die. But Ethan’s done repenting. He belongs in hell. And that’s the last thing he says before his father’s gun clicks.

8/10 – While it was satisfying to get Ethan’s backstory, the visit from the Exposition Fairy meant that there was a lot of sitting around talking and not enough action.