This week on Penny Dreadful, it’s time for the annual Vanessa Ives episode, wherein the show sets up targets for Eva Green and lets us watch her knock them all down. So, let’s watch!

Continuing from the end of last week’s episode, we join our Miss Ives still under hypnosis and still reliving her experiences in the padded cell at the Banning Clinic. John Clare the orderly is the only other human she sees. He brings her food, which she doesn’t eat. She acknowledges to Dr. Seward that she’s trying to starve herself to death because of her sins: betraying Mina and being touched by Satan. John Clare matter-of-factly warns her that there will be consequences if she doesn’t eat and when he has to carry them out–force-feeding Vanessa–he doesn’t look to be taking any kind of sadistic pleasure in them. It’s just his job. Of course, that doesn’t make it any less a horrible experience–we are still talking, after all, about a time period in which her healthcare comprised, among other things, having a hole drilled in her head. 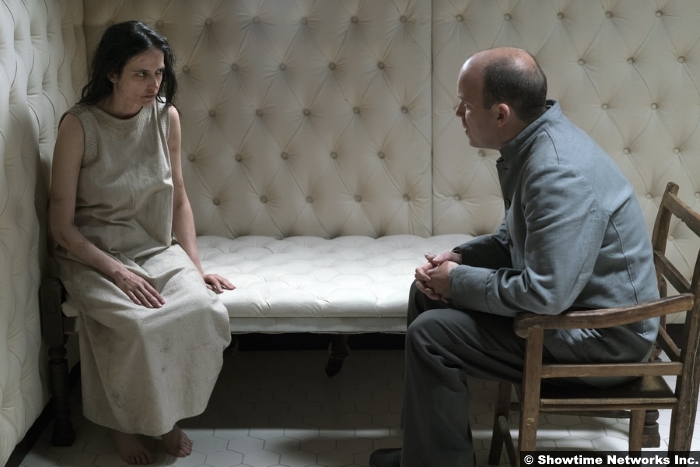 After that, he has to sit with her while she eats. He’s not supposed to talk to her, but he can’t help himself and he does let slip that Vanessa will be starting a new kind of treatment the following day. “They call it hydrotherapy.” After her treatment, Vanessa shivers in her cell, her lips blue, as John Clare brings her a blanket. He then has to go get it back from her, because she’s not supposed to have it, because she could use it to hang herself. But she could smash the chair into splinters or bang her head against the wooden frame of the bed, so I’m not sure why they’re so concerned about a wool blanket that’s not very suitable as a noose, except that it’s important for them to leech all her control. Anyway, she gives up the blanket only to leap on his back, leading to a tussle in which she scratches his face and he stops himself from punching her.

Just in case you were worried that soured their relationship, it’s nothing a straitjacket and a little spoon-feeding can’t fix. This is the most conversation we’ve seen them have and it’s revealing in some ways. He won’t tell her his name or his son’s–“it’s against regulations”–but we can pick up on other things, like the class difference between them. For example, she’s surprised he doesn’t like poetry, because all the men she knows like poetry. There is also a question of how crazy exactly Vanessa is. We are, of course, in the tail-end of the widespread diagnosis of female hysteria, the disorder in which physicians believed women be crazy because…reasons. Vanessa exhibits some concerning behavior, to be certain, but we know she’s not wrong about the Satanic encounter and her conclusion that she’s at the Clinic so she can be molded back into a proper lady is probably not that far off, either. 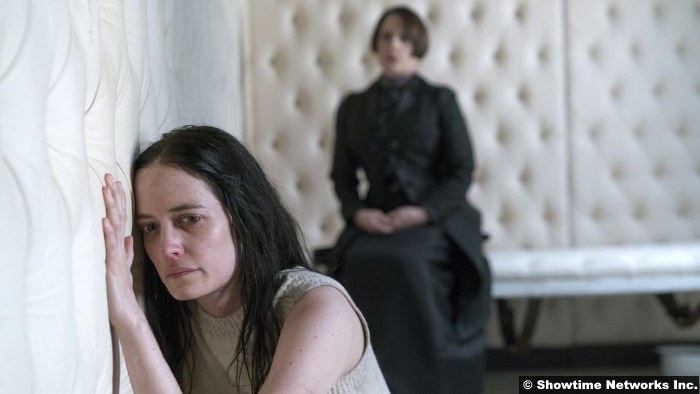 We know the Satanic encounter likely happened because we’ve seen the other kinds of things that have happened to her and oh, also because as John Clare is leaving her cell, his eyes go all demon black as he tells her in Lucifer’s voice that he believes her because he was there. Dr. Seward appears in the cell, trying unsuccessfully to convince Vanessa that she didn’t actually see this, that she assigned this role to John Clare because he was the only person she saw. Vanessa then wants to be awakened from hypnosis, but Dr. Seward tells her that she’s already tried, even burning Vanessa’s hand with a cigarette, but Vanessa refuses to wake from her fugue. Much like how you’re not supposed to wake a sleepwalker, Dr. Seward continues Vanessa’s regression, prompting her to remember what happened after that.

What happened after that was that John Clare became even more sympathetic to Vanessa. He sneaks in his wife’s hairbrush and her makeup, which he uses on Vanessa. He’s also smuggled in a book of poetry, from which he reads to her Robert Louis Stevenson’s “My Shadow.” (This seems to foreshadow the scene with Lucifer and Dracula, in which the shadows behind them appear as a serpent and a bat, respectively.) He tells her that she’s right, that what they do to her at the clinic is torture, but he can’t quit his job because, you know, his son is ill. He tells her that she will get better, though, and maybe they’ll leave together. It’s no surprise then that Vanessa experiences transference, and kisses John Clare, after removing her grubby shift. He reciprocates for a moment, before remembering himself and the fact that the naked lady pressed against him is a patient at a nervous hospital. 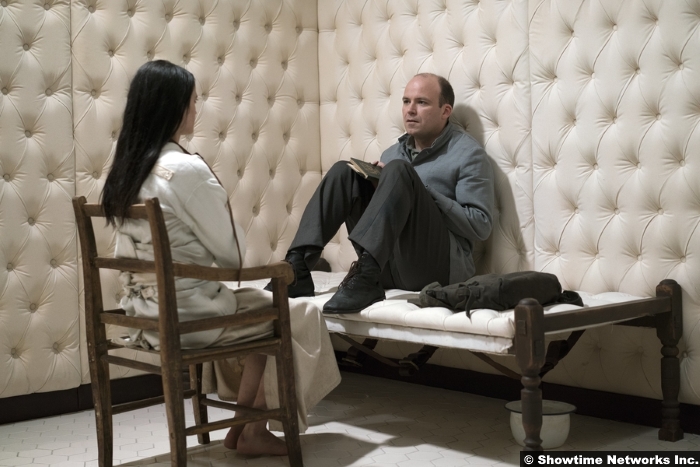 He doesn’t hold this against her, though. In fact, he redoubles his efforts to get her out of there, practically begging her to just pretend to be nice, because what’s coming next for her in the litany of monstrous treatments is lobotomy. She brings up the whole Lucifer thing again, even though she knows he doesn’t believe. She doesn’t know why Lucifer would even be interested in her, which is when John Clare goes all black eyes again, and tells her it’s because he loves her. As Lucifer, he tells her that she doesn’t matter to God, no more than a blade of grass does. She seems to fall under his spell, until something in the atmosphere shifts, making the furniture crash around and making even Lucifer afraid. Another John Clare appears and this time he’s Dracula, Lucifer’s brother.

When she rebuffs both of them, they threaten her, which she also rebuffs. She’s not afraid anymore, even when she’s set for a lobotomy. John Clare brings her meal and tells her he’s quitting, his conscience no longer allowing him to work there, damn the economic consequences. He’ll stay on long enough to see her off to surgery, so the last person she sees before will be someone who loves her. Then they part and she comes back to consciousness in Dr. Seward’s office, where she brings up the doctor’s previous statement about how we name things so they don’t frighten us. Vanessa has a name now for the thing she dreads. Dracula? Expect her.

9/10 – This season’s Vanessa Ives special is a bottle episode, and a very confined one at that, and Eva Green knocks it out of the park as usual. There should be an Emmy nomination, at least, with her name on it.