Last week on Tumblr, there was a very good discussion of how abusive Dr. Sweet’s relationship with Vanessa is. I started thinking about it in the second scene of this week’s episode, when our Miss Ives wakes up in postcoital bliss in the doctor’s workroom. Specifically, I was trying to figure out how she’s going to get out of this situation with the least amount of trauma, after she inevitably finds out who Dr. Sweet really is, and I couldn’t come up with a decent solution. But at least she slept through the part where Renfield slithered up to her, smelled her…lap, and LICKED HER NECK. 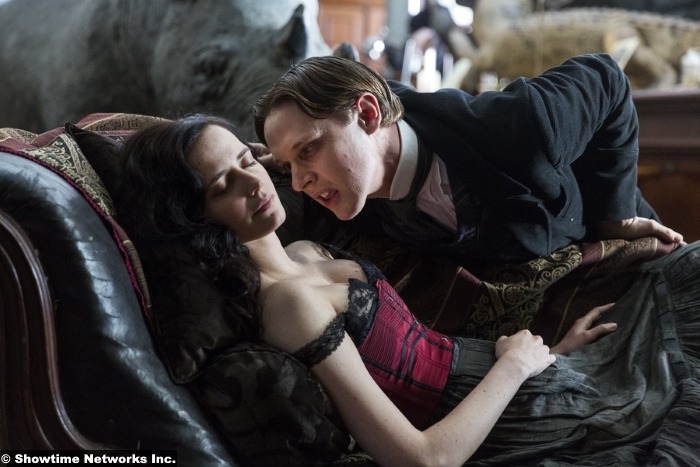 Upon arriving home, she finds a John Clare-shaped lump on her doorstep. He’s in need of a friend after reducing his son to hysterical shrieking last week. I’d thought she didn’t remember him or perhaps didn’t recognize him, but she mentions the Banning Clinic to him right away. He’s the one who doesn’t remember. She tells him that he was kind to her when it meant the most and even now, she knows he’s good. With that confidence sandwich in tow, he stalks off to the factory where his wife works, approaching her in the creepiest way possible, by gently calling her name from the shadows. Despite the street harassment, she takes his new guise much better than their son Jack did, but when they go home together, Jack accepts him. Yay, John Clare maybe has a happy ending!

Less happy is Dorian, as Lily’s teen girl squad has taken over his house. Over dinner, Lily gives them their first mission. Like Aldo Raine, she wants them to bring back souvenirs. She’s not interested in scalps, thankfully, but she does want a bunch of red right hands. She gets them and they’re piled unceremoniously on Dorian’s dinner table. But despite what you might think, it’s not jealousy or squeamishness that is plaguing Dorian, but boredom. He’s seen revolutions rise and fall, after all, and doesn’t have any higher hopes for Lily’s than any of the failed ones he’s witnessed. It seems as if he’s going to give her a chance to digest this information and act on it, but no, it’s all a ruse so that Victor can take her away to Bedlam. Lily wakes in chains and the sight of her on the floor while three men–Dorian, Victor, and Dr. Jekyll–tower over her, telling her that they’re going to make her into a proper woman, is as awful as Vanessa giving in to the dragon Dracula. We’ll get to that, of course, but first, back to the US of A.

Ethan and his remaining two dads, Sir Malcolm and Kaetenay, are on a ship back to London. Ethan has a heart-to-heart with Sir Malcolm about how the latter saved him from patricide, because as Sir Malcolm, it’s a terrible thing to have to kill a relative. In their cabin, Kaetenay does a kind of projection magic to put himself in Sir Malcolm’s mansion and visit Vanessa, where he tells her, among other things, that she’s “the woman of all our dreams and all our night terrors.” Returning to himself in the ship, he tells Ethan that he gets it, what Ethan sees in her, but it’s too bad, so sad because she’s already damned. “Not while I walk this Earth,” Ethan replies. 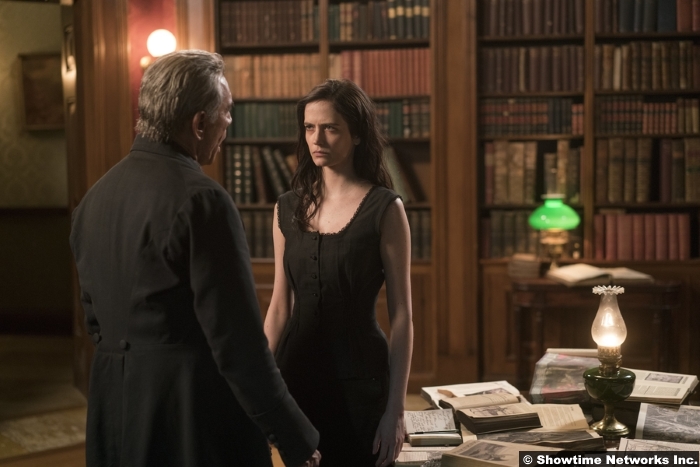 Vanessa is getting all the visitors this episode and her final one is Catriona, who’s done some more research on the dragon. First, she says that all the old lore is fake–Dracula does have a reflection and when he’s in human form, he can be killed by any ol’ weapon. She doesn’t mention whether or not he has to be invited into a home, though. The most important part of her new intel is that human Dracula hides out in a place called the House of the Night Creatures, “which is probably symbolic for any number of sinister things.” Or you know, the literal name of an exhibit on nocturnal animals. And with that, my wondering about how Vanessa is going to take it when she finds out the truth comes to an end, as she clearly realizes who Dracula is. It was Tennyson that gave her hope at the beginning of the season, but it’s Shelley she quotes now: “I have made my bed In charnels and on coffins, where Black Death keeps record of the trophies won.” 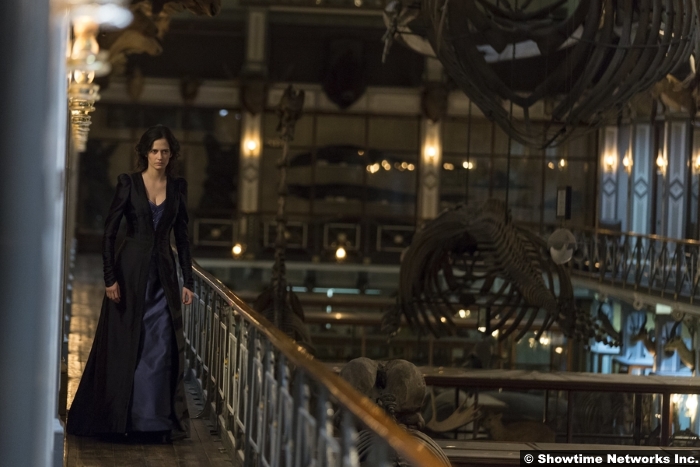 It’s interesting, that word trophy, since there are so many of them (in the form of mounted animals) in the real life House of the Night Creatures. That’s where we see Vanessa next, as she confronts Dr. Sweet Dracula. Despite everything she knows about the way he works, despite her gumption–despite her gun!–he practically melts as he tells her everything she wants to hear. She’s perfect just the way she is. And that’s true, but this creature of the night is not the only one who thinks that. Two people who think exactly that are whipping across the Atlantic as we speak. But we’ll have to wait until next week’s double episode finale to see it all play out.

9/10 – While there were some things in this episode I can’t believe I had to see with my own two eyeballs, they were almost redeemed by the impending return of the American contingent.