Once again, this episode of Penny Dreadful finds its characters living separate lives, kept apart by geography and other circumstances. However, with this installment, the show starts to hint that these discrete strings might all be knitting together. Something is coming for our Victorian friends and this week, we start to get an idea of what it will be. (It’s blood. There will be blood.)

We start the episode with Ethan, whose post-wolf dreams are haunted by Kaetenay. Their reunion is still to come, but Ethan is now in the world’s weirdest buddy comedy with sneaky Hecate. Of course, she’s been shadowing him this whole time and this week we find out why. After their run-in last season when she got to see the full blast of the Lupus Dei power, she did not hold a grudge. She said to herself, “Yeah, that checks out,” and immediately set off to hitch her wagon to his star. Specifically, she wants to be there at his side when he mounts the world. Or something that sounds less Dothraki. He is not convinced by her proposal, especially when she says that he does too want someone with him, just “not that melancholy Miss Ives.” But they put a pin in that discussion for the week. 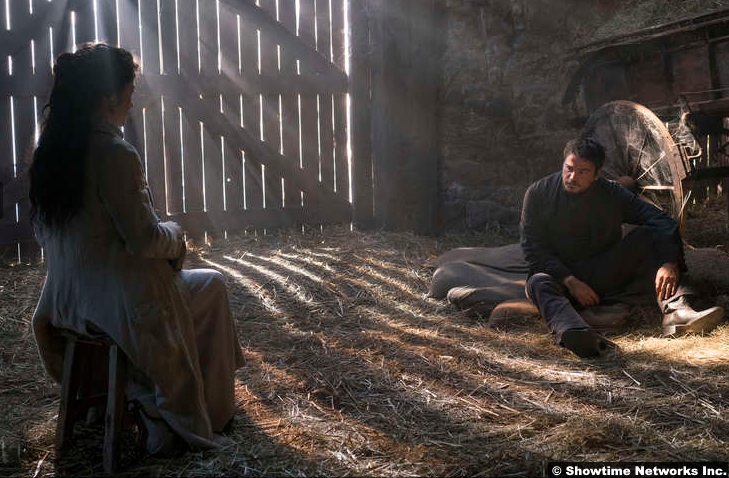 Also not having a great talk is our melancholy Miss Ives and Dr. Seward. Vanessa had broached the subject previously of telling the doctor the complete, unvarnished, monster-filled truth and as we join them this week, she’s done it. And it’s really important to her that Dr. Seward believes her. “What are you asking me to believe? That I’m a reincarnation of your witch friend? That you are hunted by vampires? That you commune with Satan? Which part do you want me to believe?” Well, when you put it all together like that, it sounds crazy. This, again, is not a great talk and doesn’t improve when Vanessa latches onto Dr. Seward’s wrist and goes into a kind of trance, where she reads a memory from Dr. Seward’s past. I’m sorry, but your hour is up.

After being absent from last week’s episode, John Clare reappears this week on his way back from the Arctic. He’s made incredible progress, both literally and figuratively, conjuring up a memory of his previous life clear enough to give him an idea of his former neighborhood. It’s in Limehouse, I think? (I’m not a geographer, Jim–I’m a historian.) Anyway, it takes him some time to track them down, but eventually he finds the godawful flat where his son and wife are now living. They are not doing so well. His son is ill, with what looks like black lung, and his wife looks rode hard and put up wet. She’s a factory worker now and this detail is revealed in a scene that I must praise for its visuals, especially in conjunction with my recent viewing of Houdini and Doyle. The shots of the factory, smokestacks spewing black exhaust, were extraordinary.

And speaking of exhausting, Doctors Frankenstein and Jekyll. Their scene this week is where the title comes from, as it’s Victor’s view on the duality of man. Henry, on the other hand, sees no gray areas. All the dirty, corrupt, ugly parts of man–we should “bury” them. Separate them entirely. And again, I’m sure you know from literature that his carrying out this idea goes great. I can’t wait for Edward Hyde to show up. 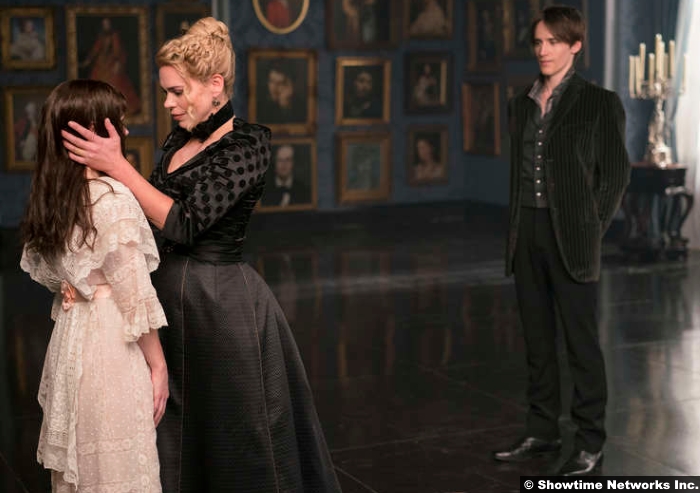 Perhaps he will when Jekyll finally meets Lily. As for her, she and Dorian give Justine a gift, in the form of the proprietor who was running the purge last week. Dorian also gives her a knife. He is pretty much in the middle of telling Justine that taking a life is a serious thing and it can’t taken back, when she slits the proprietor’s throat. Previously, she and Lily had had a conversation wherein Lily had laid out her master plan. That’s it, that’s the plan–mastery. Build an army of fallen girls and #BANMEN1892. I’m not quite sure how the blood-covered threesome they have fits into the plan and honestly I spent too much time thinking about the reality of that–the stickiness, the iron stink–to get into the scene.

Before the revolution goes down, we might want to check in with Ethan’s two dads. John Clare isn’t the only one on this show making incredible time, as Kaetenay and Sir Malcolm are already on a train across the states. Of course, you can’t outrun racism, which Kaetenay can tell you, but before he has to magic some assault and battery, Sir Malcolm comes to his defense. Basically, he calls the man trash in the classiest way possible and threatens his life. He’s the best. 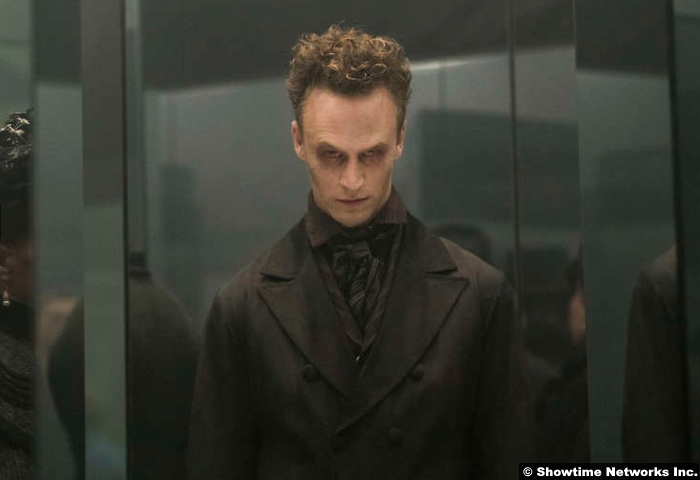 Out of her therapy appointment, Vanessa meets Dr. Sweet for a date. They’re in the same neighborhood as John Clare and it is Limehouse! There’s a fair going on and he persuades her to try the Hall of Mirrors–look at Dracula, having a reflection–where they are separated for a moment and one of his minions approaches Vanessa. She knows what he is immediately and asks after his master, only to be told that she knows him, that they had met previously “in the white room where there was no time.” Then he hears a whistle only vampires hear, apparently, and scuttles away backwards. Afterwards, Vanessa effectively breaks up with Dr. Sweet, as she fears for her soft, sweet safety. Oh, Vanessa.

She goes back to Dr. Seward, wanting to be hypnotized to recover memories of the Banning Clinic, where she was kept in a padded white room and also trepanned. Lord. After some hesitation, Dr. Seward finally agrees. In her trance, she describes the layout of the room and how she had no contact with other people, save orderlies and attendants. And that’s how we find out John Clare, an orderly at the Clinic, and Vanessa knew each other before.

9/10 – It still feels disjointed, having everyone apart, but this week’s outing felt a lot less like table-setting than the past two weeks.