After two weeks of episodes that focused mainly or solely on one character, the gang’s all here this week and we’re even making new friends. Unfortunately, we also lost one. With two episodes to go (after this one) until the season finale, the pace was picked up considerably this week. Let’s hop in and talk about it.

In case you were worried that Ethan was killed by his father last week, we join that last scene already in progress where Ethan is saved…ish, by the sudden appearance of Rusk and Marshal Ostow. Out of the frying pan and into the tea kettle. Rusk, quite smug, actually announces that he’s arresting everybody and this kind of arrogance always works out well on this show. Oh, wait.

Back in London, Dracula is getting his Vanessa update from Renfield, while our Miss Ives is dropping in on Mr. Lyle. It seems he’s heading off to Egypt to, among other things, visit Imhotep’s tomb–you may know him better as the Mummy–so Vanessa asks for a referral to another man in his field who knows the kinds of things he does about monsters and such. He gives her a card with a name and remarks that the two of them (the expert and Vanessa) would be quite the “formidable” pair, and this should be one of your first clues that the expert is a woman. She is Catriona Hartdegen (Perdita Weeks), a thanatologist, a scientist of death, whom we first meet as she is winning at fencing. Or cheating and winning, but the end result is the same. 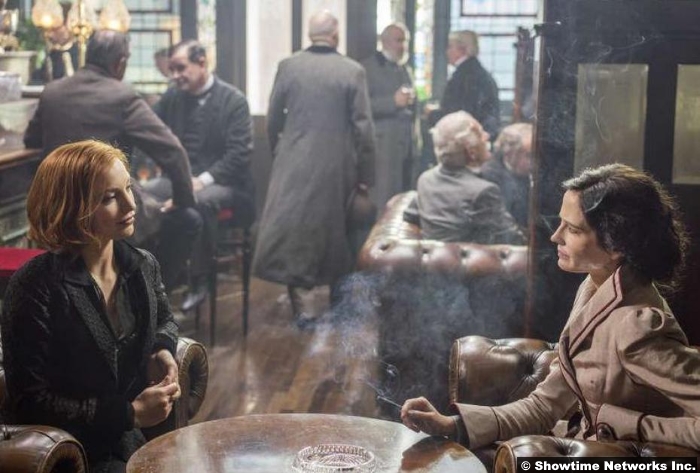 Over brandy in an establishment where they appear to be the only women, Vanessa tells her about the Dracula problem. Catriona gives her a brief history lesson, the legend of Dracula the warrior, who changes his appearance and stirs up conflict because conflict gives him plenty of blood. Vanessa, of course, is more interested in the Dracula of the here and now. Catriona warns her that in that case, like a classic abusive boyfriend, Dracula’s first go-to move is isolation. Vanessa needs to surround herself with her nearest and dearest, who are, as we know, not even on the same continent. That’s how Vanessa ends up in the saddest social call of all, hanging out with her therapist, Dr. Seward. And her advice is to stop hanging out with her therapist (yes) and go call on that nice Dr. Sweet (no!). Vanessa can’t hear me shouting at the TV, so she goes immediately to the museum. There, she tells Dr. Sweet about her Dracula problem–good Lord, Vanessa, just take out a full-page ad–then she goes full romcom. First, she tells him that even though every time she’s been in love, it’s ended in a glow-in-the-dark disaster, but her implication is that she wants to try it one more time. With him, this guy who’s known her for a good five minutes but is telling her that he loves her. And she doesn’t blink an eye at that. Instead, they have sex!

Also making bad choices this week is Victor and I know you’re shocked about that. He launches his grand plan to save Lily, by first kidnapping her from Dorian’s, and to say that it fails spectacularly is an understatement. He manages to pick the not-very-complicated lock and then is almost immediately captured by Lily’s new pupils. She’s put together her Society for Cutting Up Men with incredible speed and is already teaching a class. Already acing the class is Justine, who’s also beginning to chafe against Dorian. It is, in fact, Dorian who intercedes on Victor’s behalf, perhaps sensing that he’ll need him as an ally. 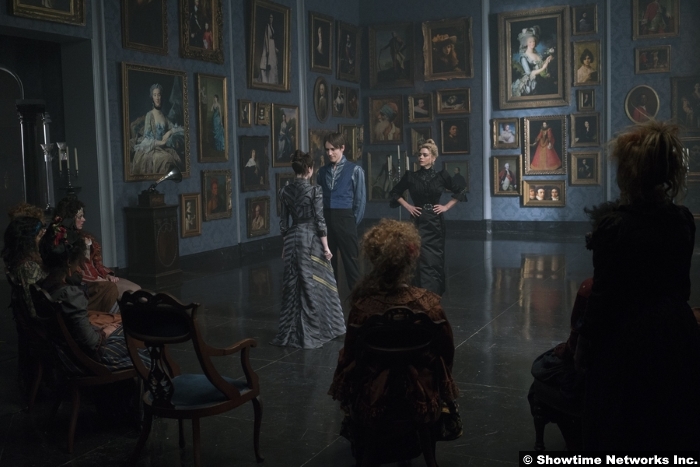 Our original sister doing it for herself, Hecate, is at the most uncomfortable dinner party since Sam and Gilly ate with the Tarlys. Jared Talbot is hosting her, Ethan, Sir Malcolm, Rusk, and Ostow. Dinner gets off to an uncomfortable start when Ethan is goaded into saying grace and responds with a blasphemous take on the Lord’s Prayer. Then everything goes even more sideways. Ostow is shot after complaining that Senior Talbot killed his men on that train. Hecate takes Nightcomer form and is almost immediately gunned down, a disappointing development that’s emblematic of Ethan’s rather unsatisfying plotline so far. Rusk is dispatched quickly as well. And you know as soon as someone mentions that the horses are spooked that Kaetenay is outside. Then everyone’s just fanning and diving for cover, culminating in a meetup in the chapel again, this time with everyone who’s alive. Ethan, perhaps unlike his father, can’t take his relative’s life. Sir Malcolm can, though. And just like that, we’re back to My Two Dads. 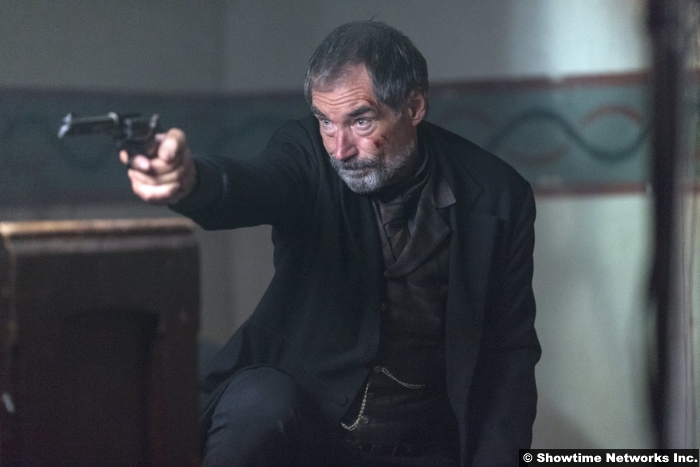 Speaking of dads, John Clare is moved by his son’s pitiful illness to clamber down from his watch in the ceiling and give him water. His son is initially comforted, but then gets a good look at dear ol’ dad, and poor John Clare is once again an object of someone’s horror and is forced to retreat.

8/10 – It was great to hear from everyone this episode, but I’m getting impatient to see them actually together. It looks like we might get a taste of that next week, though. Finally, RIP Hecate. You were very sneaky.