Back to the Future: Still perfect, thirty-five years later

It’s hard to write about Back to the Future and how absolutely perfect the movie is without just quoting a dozen lines from the first thirty minutes of the movie. To this day I have never seen a film as tightly put together like this, with not a single wasted line of dialogue, not a single moment, or character detail introduced that doesn’t come back in one way or another during the movie’s final two acts. I probably throw the word “perfect” around too much in my movie reviews, and admittedly I have used it for movies that had actual flaws (just now flaws that detracted from the overall movie in any way).

Back to the Future, however, actually is the perfect film. It belongs in an uber-selective list of films that reach that lofty height. A few others I’d put in that category are Raiders of the Lost Ark, The Empire Strikes Back, E.T., and Jurassic Park. There’s a lot of Spielberg in that list, I know, and Back to the Future certainly capitalized on the remarkable run of movies Spielberg was on by the mid-’80s. He’d already made Close Encounters of the Third Kind, Jaws, two Indiana Jones movies, and E.T. He didn’t direct Back to the Future, but his Amblin Entertainment production company financed it, and the film carries all the hallmarks of the “80’s Amblin” style, a style which produced hit after hit after hit in that era of cinema.

But let’s not dismiss the work of Robert Zemeckis. He was not a director in name only, like Tobe Hooper was with Poltergeist. This was fully Zemeckis’ baby, and though the director today is diminished in many people’s minds as just the “motion capture animation guy” (Beowulf, The Polar Express, A Christmas Carol), the fact is Robert Zemeckis has been one of the boldest, industry-driving directors of his era. This is the man who made Who Framed Roger Rabbit, giving us the one and only time Mickey Mouse and Bugs Bunny appeared on screen together. This is the man who filmed half of Cast Away and then stopped production so Tom Hanks could fast and starve himself into the look needed to depict a man lost on a desert island. This is the man who basically pioneered the notion of sliding modern actors into old footage, creating something new, as he did with Forest Gump.

Over and over Zemeckis has proven himself as much a cinematic innovator as George Lucas. And the greatest skill he displayed in Back to the Future was how seamless he made everything feel. Not to focus too much on the sequels, but the section of part 2 where Marty and Doc return to 1955 (knowing that they have to hide from “their other selves” from the first movie’s escapades) is a masterclass, not only in special effect work but also directing. The special effects are flawless to the extent that you instantly take for granted that you’re watching one actor play two different versions of himself, one of which is a copy of the work done in a previous movie, while sometimes watching new footage super-imposed over the originally-filmed material. In lesser hands, it would be instantly apparent at which points we were watching old footage and which parts were new, but Zemeckis and ILM handled the material like seasoned pros.

Perhaps even more impressive is how well the movie holds up despite how necessary one’s knowledge of both 1955 and 1985 is to the plot. The former date was “only” thirty years prior at the time of the movie’s release. It was the era of the parents of the target audience of the movie, so they knew the decade and its cultural touchstones well enough to appreciate how different it was to their “modern” era. But that modern era of 1985 is archaic today. We’re five years past the distant future depicted in Back to the Future 2. Trying to appreciate the 80s is a little harder for kids today as appreciating the 50s was in 1985, but asking today’s young people to appreciate the culture of 1955 is practically a lost cause.

And yet, the movie holds up. 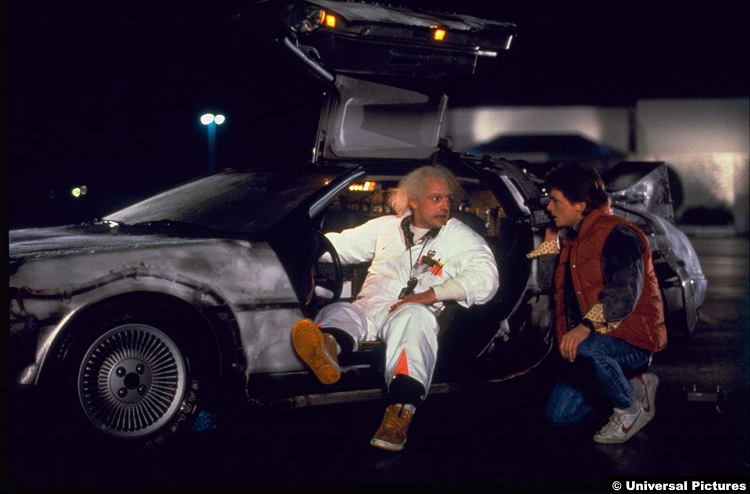 I rewatched the movie last week with my 13-year-old son. He’s way too young to appreciate the culture of either the 1980s or the 1950s but, despite that, the fish out of water humor remains almost entirely timeless. I had to explain what a “Pepsi Free” was, but…that’s about it. The movie simply works. Despite how ingrained it is in the two decades it features, thirty-five years later, it still just works. It works because it does a perfect job in its first half-hour establishing the rules of the universe and the stakes of the plot, while sowing a dozen little seeds that will sprout in the second half of the picture.

The film has the perfect balance of humor, adventure, science-fiction, romance, and above all, earnestness: It somehow manages not to take itself seriously so you don’t worry about the time-travel science nonsense or the anachronisms (like Marty bringing rock and roll to Chuck Berry via his cousin Marvin), while also taking itself just seriously-enough with the George/Loraine romance to be genuinely moving at times. 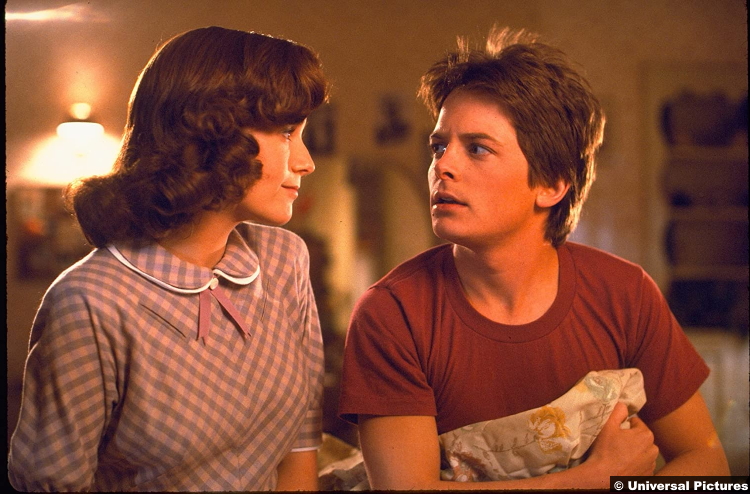 The score by Alan Silvestri remains a favorite of mine, moving from whimsical (the opening notes), to thrilling (the car chase before the jump to 1955), to romantic (the George/Loraine motif), to purely adventurous (whenever the main theme kicks in). It’s a delight to the ears and, again to praise Zemeckis, the movie has some of the very best marriages of visual imagery and musical accompaniment. Two that stand out are the tight-in pan across the chronometer whenever the Delorian approaches 88MPH and this moment from the third act…

The score, direction, and song performance all work in perfect harmony, building to the crescendo when George comes back and kisses Loraine: The way the diegetic music in the movie (Earth Angel) swells in sync with the nondiegetic soundtrack—the way Silvestri blended his score with Earth Angel at that moment—is such a beautifully made scene that I tear up every time. It’s my favorite moment of the movie and one of my all-time favorite moments from any movie, ever.

Parts 2 and 3 get a bit of a bad rap: The second film is knocked for its darker tone, though it has one of the most thrilling third acts in any movie you’ll ever see, while part three suffers from franchise fatigue and rejection over the western setting. Nuts to that. The franchise is excellent. Part three is a ton of fun, part two just does not get the love it deserves for how incredible an achievement it was from a special effects standpoint (and it’s way more fun than the common complaints say), and part one is…perfect.

Back to the Future is perfect.