REVIEW: Top Gun Maverick is a sequel that soars!

Tom Cruise is a franchise unto himself. At 60 years old, he’s a relic of a different era, when the name at the top of the poster didn’t belong to a brand but to a person, whose mere appearance in the movie was enough to ensure ticket buyers went to see it. Jimmy Stewart, Cary Grant, Clint Eastwood, Arnold Schwarzenegger, Will Smith, and more belonged to an era that has given way to “the next Marvel thing” or “the next Star Wars thing” or “the next Pixar thing” and so on.

The actor got his start in the movie business over forty years ago and has starred in well over fifty movies, but you can count on one hand the number of them that were either a critical or a commercial failure. His films have spanned a variety of genres but, other than the Mission:Impossible franchise, he doesn’t do sequels and has gone on record to say he doesn’t like going back to the well and revisiting a character or story. In fact, a decade or so back he specifically said he wouldn’t even entertain the idea of doing another Top Gun movie. And why would he? There wasn’t anything in the original movie that warranted a continuation, and the more time that passed the less reason there was to do it.

But then a funny thing happened: So much time passed that a good reason to make another just sort of organically happened. Cruise went from being young enough to do a sequel in the late-80s but having no incentive, to being too old to do a sequel in a way that wouldn’t be degrading to, now, being just old enough to come back to the world as an older, seasoned Maverick, ready for one last flight.

Somehow, in the process of releasing a sequel to what is, essentially, little more than a silly “machoism-personified” fighter pilot movie from the 80s, Tom Cruise has given the movie-loving world something we needed and didn’t realize just how badly we did: A real movie. 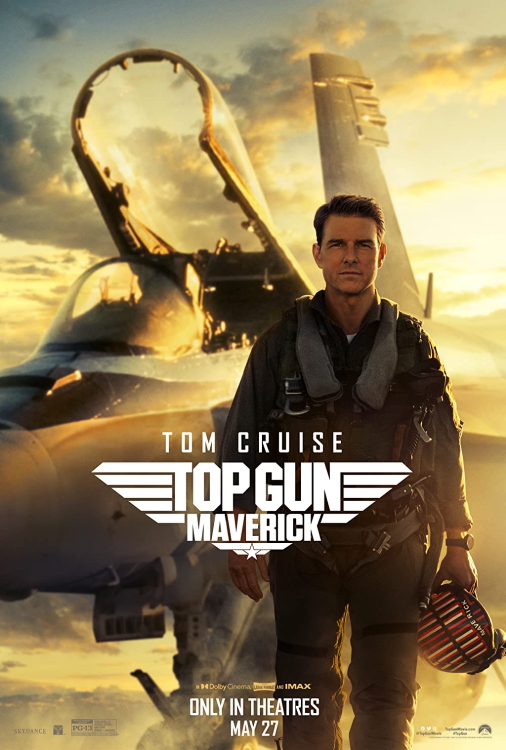 I’m sure there are hundreds of computer-generated shots, but I have no idea where they are. I couldn’t point them out if my life depended on it. From where I sat, as the speakers boomed and my chair rattled, everything before me was as genuine an experience as the actor himself promised in the short video before the film started. That commitment to realism extends beyond the dogfighting scenes. Every possible mistake a movie like this (a seemingly needless sequel to a decades-old movie) could have made was avoided. As a microcosm of that: Early in the movie, there’s a scene when Maverick first sits down at the local bar, and we focus on Cruise as he’s sort of sitting back, watching the new Top Gun fighter pilots enter the room, banter, and basically remake a scene from the first movie. It’s like Maverick is watching “the cheesy, unnecessary Top Gun remake movie” playing out before his eyes, and he’s smirking at how silly it is. The scene lasts only for a minute or two before the movie goes back to being HIS movie, and it’s all the better for it. He’s the star. He carries the film. He makes it great. 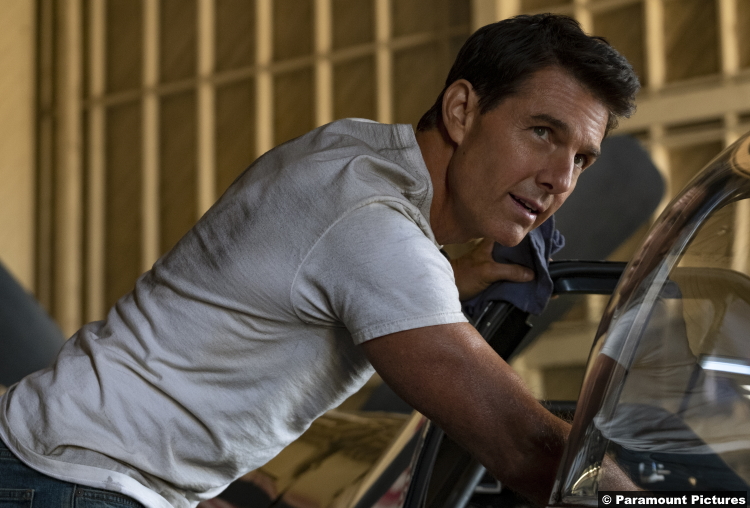 The plot is basically the greatest Star Wars movie that never was. There’s an enemy base that must be destroyed but the only way to do it involves flying low through a winding trench, below the radar and the sights of the surface-to-air missiles. You have to move fast because enemy fighters will be on their way to intercept as soon as they realize what’s going down. After getting through the trench you have to destroy a target that’s only a few meters wide, then bug out and hope against hope you don’t get shot down as you return to base.

It’s the Death Star trench run and I’m not even complaining.

The amount of precision flying required and the amount of enemy combatants swarming the area means it’s basically a one-way job. The Navy has recruited the best of the best from the Top Gun program and they have three weeks to learn how to pull off their impossible mission. Who better to train them in the crash course than Maverick?

What follows is a straightforward plot, with few twists or turns or unexpected developments. It’s just a basic, point-A to point-B, story progression that, honestly, should not work as well as it does. The reason it succeeds is because the movie is made the way big-budget action films used to be made: on film and on location. It’s beautiful to look at, acted with sincerity, punctuated by a great score, and edited to move at a brisk but steady pace. 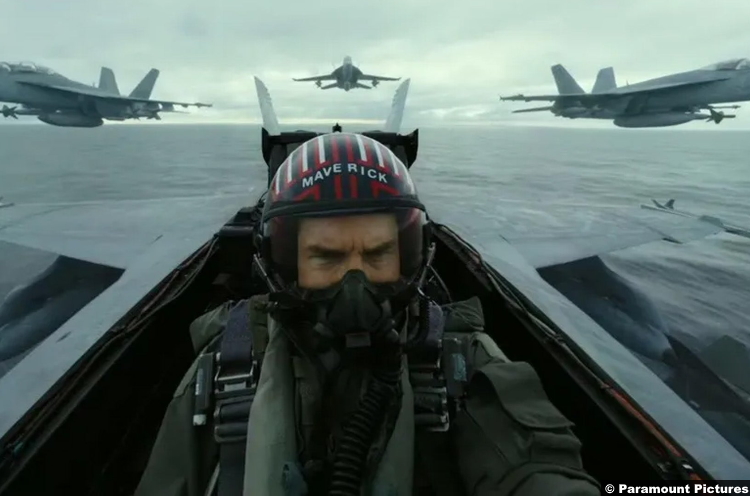 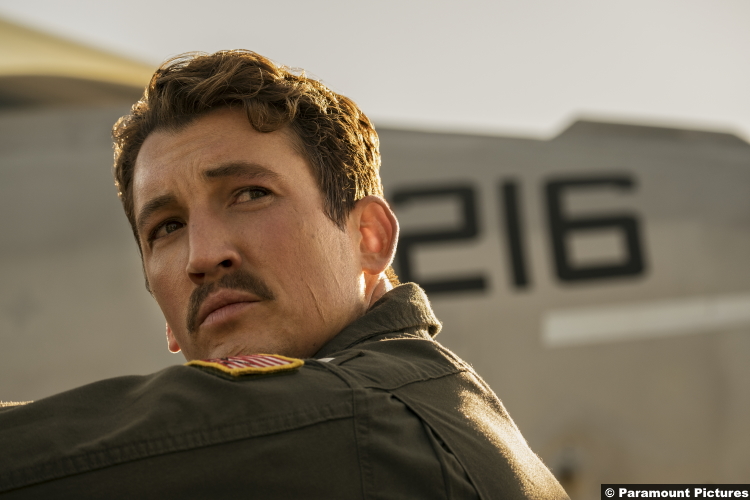 The movie is divided into two halves that ping-pong back and forth throughout the runtime. There’s the drama that follows an expected pattern with Maverick and his love interest, the ageless beauty that is Jennifer Connely, along with tension between Maverick and “Rooster,” the son of Mav’s old friend, the late Goose. What should be a cliche-fest that bores is instead a logically told storyline that packs enough emotional punch to carry the viewer through the first two acts, and then rises to a beautiful crescendo in the incredible final act. The other half of the movie is the action, the fighter pilot spectacle. These scenes were always the best parts of the excellent original film, and they’re elevated to perfection here. The first movie relied heavily on stock footage, distant shots of professionals, and actors on soundstages, all coming together in a way good-enough to make you suspend your disbelief.

This movie, with all the cachet that Tom Cruise commands, basically said…

As I said, I’m sure there is movie magic and trickery going on, but I’m also sure that some of those shots of Tom Cruise in the cockpit flying an actual fighter plane are actual shots of Tom Cruise flying an actual fighter plane. I don’t know how they pulled it off, but after seeing the past three Mission:Impossible movies, I’ve learned to stop asking that question and just to sit back and be amazed at what Tom Cruise can do in a movie.

Both elements of the film—the drama and the action—come together in the film’s (perfect, perfect, perfect) third act, where I wondered if Maverick would live, if the mission would succeed, if he and Rooster would make peace…all the silly things that should be obvious left me on the edge of my seat, wondering, worried, leaned forward, eyes widened, fully engaged.

The way a real movie should.

10/10 – In an era of silly, unnecessary, embarrassing sequels to decades-old movies,  Top Gun:Maverick soared where the others crashed, succeeding purely by being an old school, throwback, Hollywood action movie, the way classic movies used to be.