The heat is on in the finale to Season 4. Last week, Book and Jett Reno warned Burnham of Tarka’s plan. However, Ten-C has trapped Discovery in a miniature hyperfield orb. In a race against time, Captain Burnham stop Tarka’s bombing run on the DMA power source. Even if Tarka succeeds1 a subspace rift will destroy Ni’Var and Earth. At least they’ll have months to evacuate, the mad scientist argues, that’s better than the DMA destroying them outright in a few hours.

Burnham’s problems? The Ten-C aren’t talking to them anymore, not recognizing Tarka as a discrete being from them. Captain Burnham must find a way to escape the orb, stop Tarka, and prove to the extragalactic aliens they mean no harm. Or billions will die.

The first half of “Coming Home” is a fast-paced, blockbuster affair. In particular, the special effects team delivers cinema-quality production value, from the opening shots through to the end. The chase sequences, the spore drive overloads, the Federation evacuation forces… When a break in the action finally came, I thought the hour was nearly over! The pacing and editing is superb.

In the second half, Discovery engages in re-negotiations with the Ten-C, finally unveiling the incredible alien design.2 Burnham, Rillak and co. make their effort to connect (the Season 4 keyword) and save their worlds.

The Season 4 finale, in a way, snubs its nose at anyone who dismisses the show as “Nu Trek” or somehow unworthy of the franchise mantle.3 This is accomplished in two ways. First, the episode references various resolutions from past Star Trek media. Second, and my favorite, it leans into its positive feel-good tone and advocacy for diversity.

Star Trek through and through

The climactic episode hones into Trek history to enhance the gravitas of certain scenes for long-time fans but still work on their own. I appreciated these moments for the contrast as well as the emotional resonance they evoke. 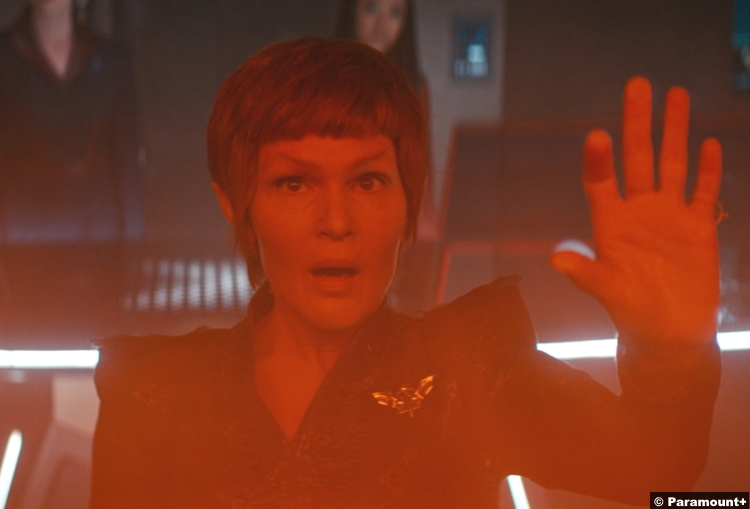 First to represent is T’Rina, President of Ni’Var. When Ten-C have imprisoned the Discovery, T’Rina proposes Vulcan telepathic contact. The Ten-C aren’t responding in any meaningful way, and with no other contact solution possible, T’Rina telepathically connects with the Ten-C. For the savvy, this scene is reminiscent of Spock’s voyage into VGER in Star Trek: The Motion Picture.4 She suffers some brain hemorrhaging, but gives the message: They won’t trust us, they won’t help us leave. No Vulcan Ex Machina. 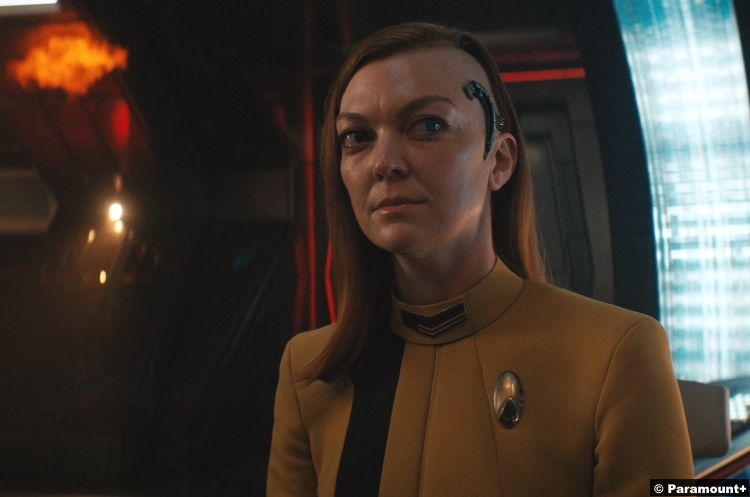 Second, Burnham’s order to Lt. Detmer. This scene has more to do with the initial episode of the season, but ties into the B-Plot of TNG’s “Thine Own Self” (S07E16). In the B-plot, Deanna Troi takes the exams to become a Commander, but continually fails one holo-exam. The solution? Send a crew member to death to save the ship. Likewise, Captain Burnham must give a similar order to Lt. Detmer. At the last minute, Earth General Ndoye insists she go instead.5 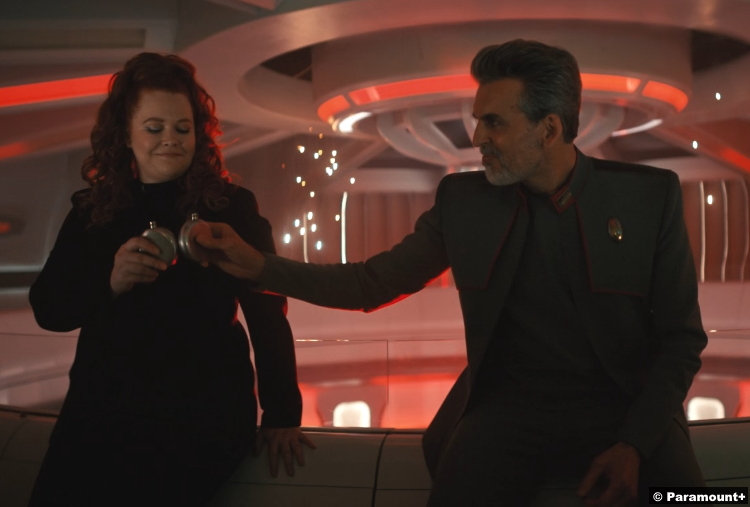 Last, they pay respects to their own. We get one last Black Alert for the season, and Mary Wiseman makes a triumphant return as Sylvia Tilly. And of course, she elects to stay with Admiral Vance to the bitter end. These Discovery crew members are addicted to the thrill of facing death, eh?

The core of Discovery is its heart

Discovery’s distinguishing factor among Trek shows has become its capacity for emotional honesty. (I see it as New Sincerity in television.) Screenwriting and the performances reflect this unabashed sentimentality.6

Sonequa Martin-Green keeps it together throughout the crisis, and even only briefly loses her composure after Discovery fails to beam Book back. As a viewer, it’s quite clear the Ten-C nabbed Book. The consolation prize for this dearth of suspense is Martin-Green’s performance during the Ten-C negotiations. Even still, when the Ten-C return Book, Burnham’s “Are you real?” line is a perfect reaction for all the craziness she has lived through.

For me, David Ajala and Shawn Doyle stole the show. Their final scene together is a moving culmination the writers have built since before the mid-season break. Two men who have lost everything, and acted in fear instead of hope. Book had Burnham. Conversely, Tarka had nothing left. The dialogue even suggests the Golden Ratio heaven to be a fantasy.

Where the other performances during the re-negotiation scene were friendly, David Ajala’s retained a visceral antagonism. Granted that the others are trained diplomats trying to make sure the big powerful aliens don’t annihilate two worlds, they did not try much to reprimand them for their behaviors. 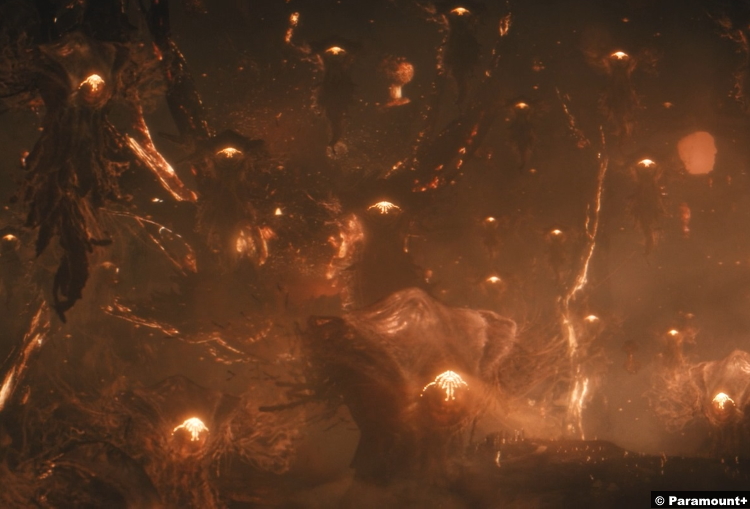 Book’s speech bounces off Picard’s pithy “We have no law to fit your crime” nonsense in TNG’s “The Survivors” (S03E03) and demands the powerful beings attempt to make amends. His performance concludes coming full-circle from the start of Season 4, describing how the Kwejian World Root interconnects all fates. The Ten-C reflecting the Kwejian bioluminescence in response brings home a perfect sense-of-wonder. A fantastic finale to the season-long conflict.

An open frontier to season 5

Loose ends are tied up, and the Discovery meets the President of Earth in the final scene.7 Strangely, this ending scene feels not only like a Season finale, but a series finale. Paramount renewed the show for a fifth season in January, so luckily, that’s not the deal. Perhaps this détente will serve as a time jump for the crew (and Book’s wrist-slap sentence).

The cleanliness of the resolution is a bit perplexing. Each previous season left some collateral damage, more work to be done. One unanswered question is the role of Ten-C, but I doubt this will be a focus. In the end, the door is open for the Discovery to explore—if its spore drive is repaired.8 Time to boldly go where no one has gone before for a while? 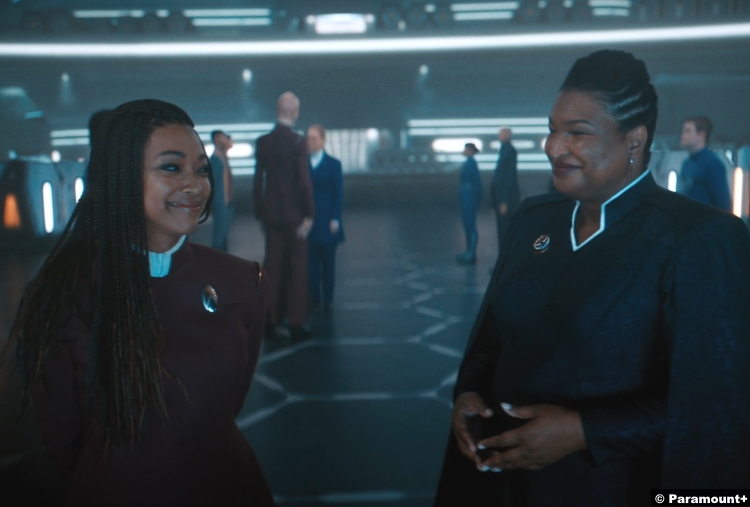 Let’s not fool ourselves. Despite Burnham’s eagerness to discover new worlds, as she tells Earth’s president, Discovery is sure to maintain its serialized narratives. Star Trek: Strange New Worlds has confirmed their focus will be in telling self-contained stories,9 so I doubt Discovery will emulate its spin-off. Open speculation is all we have for now.

I, for one, hope to learn more about 32nd century Federation cultures. How have the Ferengi changed? Are the Klingons still around? Did the Borg totally dissolve?10 Who knows? At least we have so much Star Trek media to fill the time until Discovery Season 5 begins.

9/10 – The first half of Season 4’s finale packs a punch, and the second half applies the ice patch. For fans of Star Trek, this episode is why we’re here. Playing to their strengths—high octane tension and meaningful resolution—the Season ends on a grand window of possibilities.

1 There’s no indication Tarka’s plan could actually have an impact on the Ten-C other than his insistence that his plan will work. He spouted the same overconfidence in S04E09 “Rubicon”.

2 I’m not one to easily give praise to alien design, especially for a television franchise so notoriously bland or just plain ridiculous in their alien designs. The truly alien biological design is a great visual achievement.

3 I despise the anti-SJW hatred towards Star Trek: Discovery. Roddenberry literally created Starfleet to be warriors for social justice in space.

4 There are many other examples of Spock performing this dangerous feat, notably with the Medusans.

5 Luckily, they save Ndoye. Losing Phumizle Sitole would have been a great shame. I’m eager to see what role in Starfleet she will fulfill now that Earth has rejoined the Federation.

6 Quick note for those who complain about “too much emotion” in a Star Trek show. The Next Generation introduced the Ship’s Counselor (read: a psychiatrist) as an important member of the crew. Reason dictates the better we understand psychological trauma, the more important handling and expressing emotion will be for a future, functional society.

8 Also, will other Starfleet ships use Spore Drives? Provided they can find Kwejian pilots…

10 Though I suspect Star Trek: Picard Season 2 will have some answers for us on that front.