Slingshot into the Finale

Following Captain Burnham’s Away Team revelations into Ten-C’s past, the crew meets the extragalactic aliens at long last. The episode plays out a more traditional science fiction (SF) first contact scenario that draws from many classic examples, narratively and visually. There is no A-plot/B-plot. All the focus of this episode contributes directly to the Discovery’s efforts to create a dialogue with Ten-C. 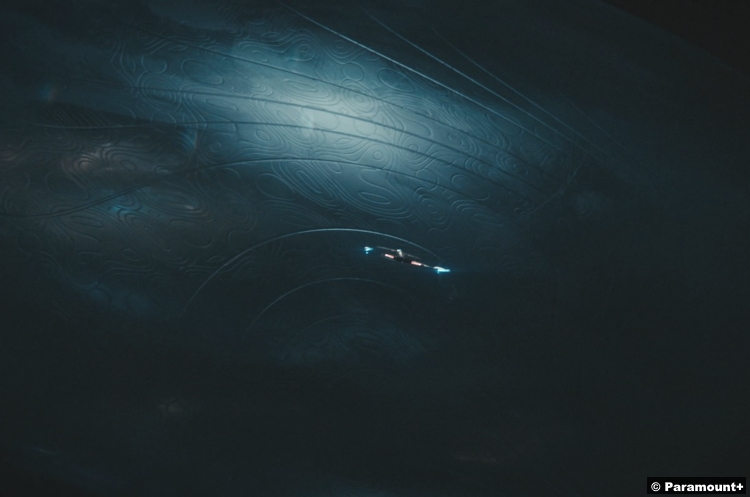 Seeing this I asked, “Is this going to be like the TOS episode “For the World Is Hollow and I Have Touched the Sky?” It is not.

The big wow comes quick, with an opening shot of the exterior of the Ten-C’s hyperfield. The ellipsoid radius is 1.5 Astronomical Units (1 AU is the distance between the Earth and the Sun), a little less than Mars’ orbit. Inside is a star and three gas planets. This is a classic example of a Dyson sphere, a spatial megastructure capable not only of harnessing all the energy of its star but able to control its trajectory.  Therefore, the Ten-C a Kardeshev type II civilization.

Discovery and Book’s cloaked ship are pulled inside the hyperfield, where nearly all the present action takes place. The crew commits themselves to some fun-to-watch scientific problem-solving. Meanwhile, Book and Tarka advance their plan to escape into the hyperfield. Behind their backs, Commander Jett Reno builds a commlink to Discovery. Ultimately, she’s able to use it, but it may be too late.

First Contact is not only a big theme in Star Trek but science fiction at large. However, since its beginnings, Star Trek has circumvented the language barrier with its Universal Translator. This script addresses the SF conundrum of true alien contact and pulls influences from a lot of famous SF films to do so.

I’m sure there’s more to this list, but here’s what I noticed: 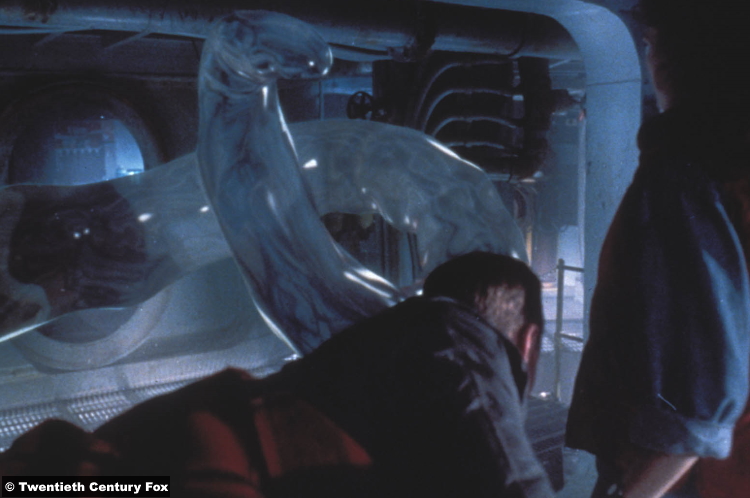 James Cameron’s 1989 film about First Contact on the ocean floor. The hyperfield protrusion that captures the Discovery resembles the water-control CGI from that film. In my opinion, this visual evocation is a great way to signal the vast unknown intellect of Species Ten-C.

Close Encounters of the Third Kind 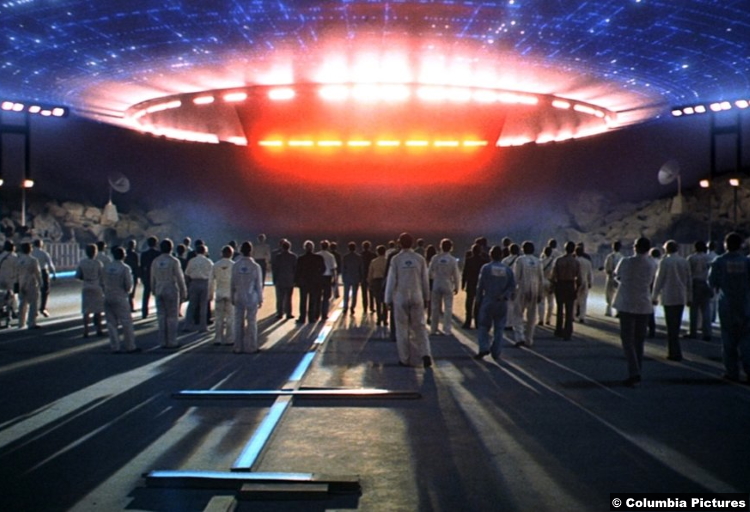 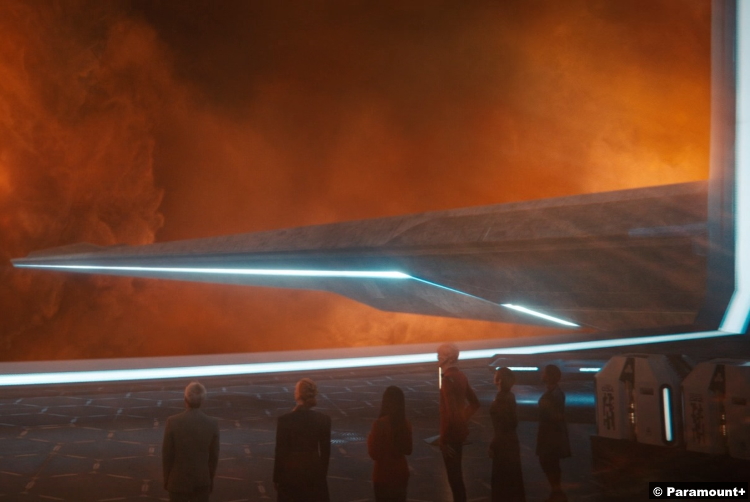 In a scene that emulates Steven Spielberg’s 1978 film Close Encounters of the Third Kind, the Ten-C flash lights at the Discovery. To boot, Lieutenant Nilsson even compares emotional language to music.

One of the great alien creations of Species Ten-C came from this scene. To speak, they emit emotion-bearing hydrocarbon pheromones and simultaneously flash bioluminescent body parts.2 I have never come across a similar method of communication in my vast reading of SF literature (let alone babied-down, by comparison, SF films and TV), so I was incredibly impressed by this alien invention. 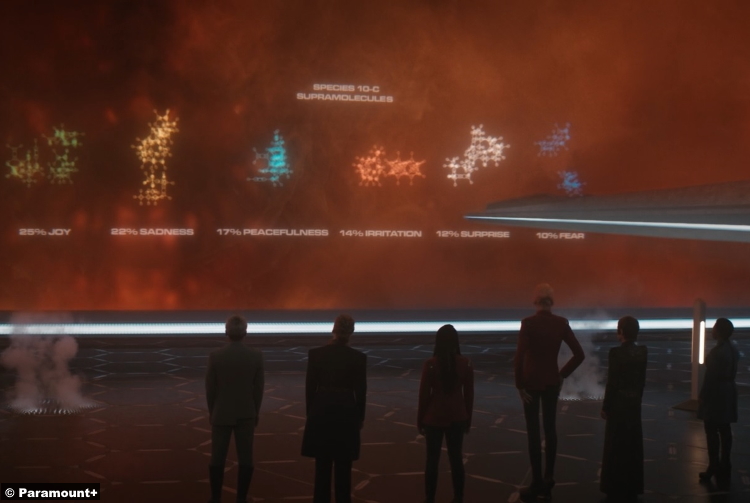 “What? Mixed emotions?” they say incredulously as they themselves have obviously mixed emotions

Conversely, this is one scene where I was a bit disappointed with the writing of the Discovery crew characters. Maybe it’s nitpicky, but as a viewer, it was simple for me to match the lights flashing to the molecules as a means to decode the language. Instead of having one character intuit the same, the writers spoon-fed the process of First Contact to the audience. In doing so, the command crew appears incompetent. 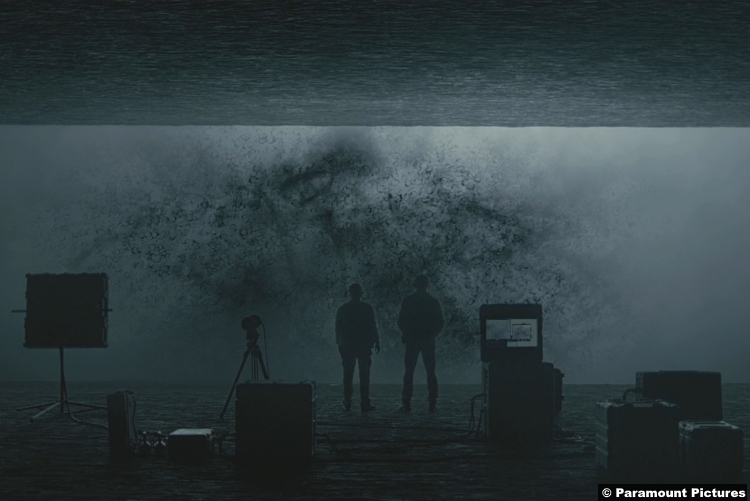 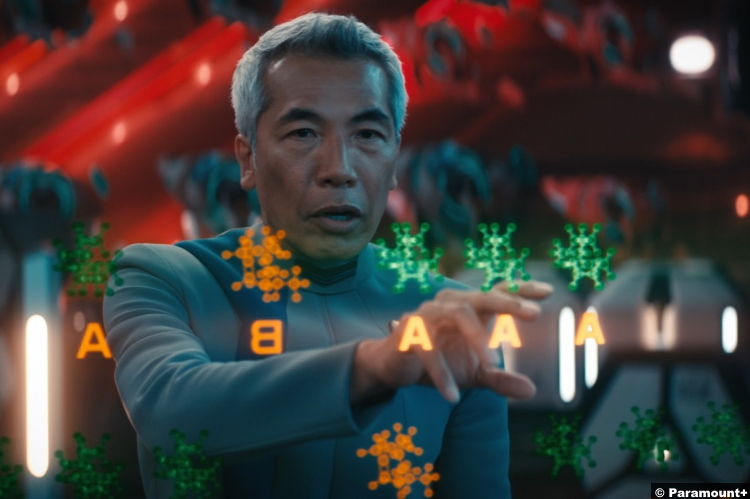 “Of course!” You start with mathematic first principles.

Denis Villeneuve’s 2016 film Arrival is an adaptation of Ted Chiang’s 1998 novella “Story of Your Life” (winner of the 2000 Nebula Award for Best Novella). In this film and novella, the scientists must build a vocabulary base with the aliens working from mathematic first principles. I mention Arrival not only because it’s the most recent example of this trope3, but because Director Olatunde Osunsanmi pays more visual homage to Villeneuve’s work than other such films.4

Flight of the Navigator 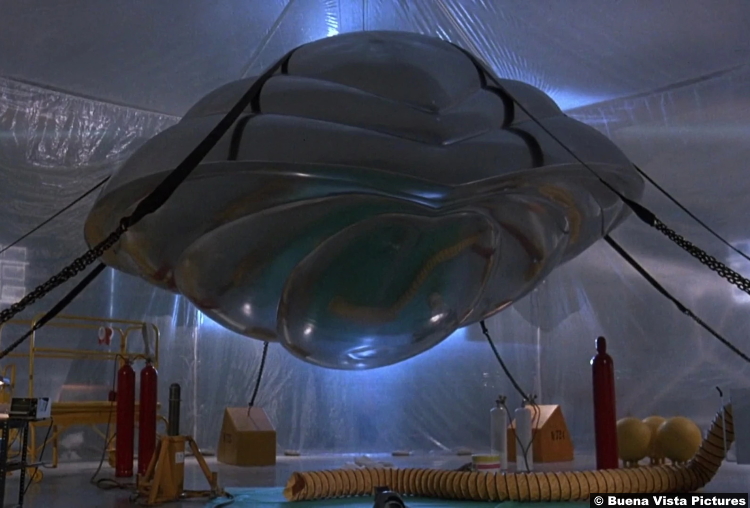 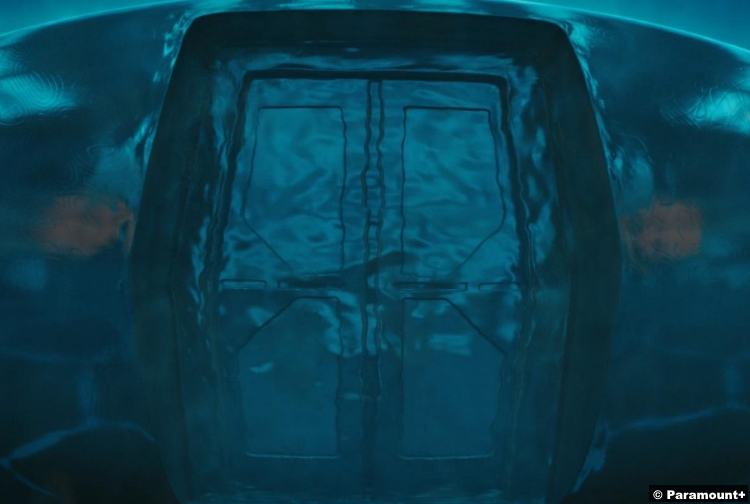 This is a bit more of a niche, maybe not a reference, but they do look similar, right? Flight of the Navigator is a 1986 Disney SF children’s adventure film. It featured some of the earliest CGI efforts. In combination with my The Abyss reference, this makes me wonder if these were conscious visual choices, or if the effects department took simple design choices. Television time constraints are notoriously hard on budgets. I’d like to defend the show, and say Discovery tried to make the best of both worlds, but… the fact is I just cannot know.

Stand Up and Don’t Give Up the Fight

Tig Notaro is just incredible. She has made fun of her acting in the past, but I disagree with her assessment. As Jett Reno, she has a natural presence that gives weight to her dialogue. For example, there are plenty of moments this season where side characters of the crew have had the opportunity to share past moments of their lives to contribute to the thematic development of the narrative. Commander Reno’s story about her time on the USS Hiawatha before Discovery saved her cuts deeper than anyone else’s reflective monologues this season. It doesn’t hurt that anyone acting alongside David Ajala seems to shine brighter.

Speaking of Book and Tarka, damn, Shawn Doyle is a boss. If it weren’t for the reveal of Tarka’s backstory in S04E10, I’d just be annoyed Book didn’t see the betrayal coming. Instead, the writers have crafted a complex, sympathetic villain. Tig’s Commander Reno picks at his raw wounds, too, and in a single look, Doyle shows the depths of Tarka’s pain. Truly a masterful performance.

Similarly, with the situation spiraling out of control, Sonequa Martin-Green’s portray of cool Captain Burnham is becoming more visceral. Yet, she has still her calm, helpful captain moments.5 With the spiral cam shot at the end of this episode, I’m excited to see the more hard-edge Burnham pull everyone through this finale.

8/10 – “Species Ten-C” dives deep into science fiction film and literature to bring viewers a novel and alien extraterrestrial. Though a bit hand-holdy, the crew builds scientific and logical solutions to all the problems before the unexpected happens. A solid pre-finale episode.

1 Star Trek: TOS S03E08 “For the World Is Hollow and I Have Touched the Sky” is an episode about a generation ship within an asteroid that has forgotten they were a generation ship. The Orville also did their rendition of this idea in S01E04 “If the Stars Should Appear”.

2 The Ten-C are almost certainly not the Kelvins like I thought. The Kelvins left behind their emotions for higher cognitive ability. Unless the Ten-C use vestigial emotional pheromones to communicate… But knowing Discovery, it’s unlikely they’d backtrack at this point.

3 But also because Ted Chiang is one of the best science fiction authors alive. He is amazing. Read his short story collections Stories of Your Life and Others (UK, Canada, US) and Exhalation (UK, Canada, US).

4 I could also mention the 1997 film Contact, starring Jodie Foster. This film is based on Carl Sagan’s 1985 novel Contact, which riffs on James Gunn’s 1972 novel The Listeners. Gunn’s novel, in my opinion, is superior to Sagan’s more celebrated work.

5 My favorite cool Captain moment in this episode is Burnham giving Saru advice about Vulcan relationships. Season 2 Sarek and Spock feel so far away at this point, it’s like another show.