This week’s episode of Star Trek Discovery takes its name after the idiom “crossing the Rubicon” meaning going past the point of no return.1 For those in the know, well, it was easy to foresee the final outcome. Still, the voyage to the end holds its surprises.

The USS Discovery is hunting down Book and Tarka. They follow the tracking plant Captain Burnham left on the isolynium in the last episode. However, President Rillak thinks the crew of the Discovery is too close to Book to do the right thing. Admiral Vance agrees and appoints a specialist observer to intervene if necessary. Even though this sounds pretty pointless—Burnham’s M.O. is to do the right thing, not to blindly follow orders—the specialist is a former Discovery crew member, Commander Nhan.2

This episode goes hard on the stealth. First, the Discovery attempts a sneak infiltration mission at Book and Tarka’s hiding spot. Then, once both ships are within the DMA, there’s a cat and mouse chase sequence with definite “Balance of Terror” (TOS S01E14) vibes.3 The parry and ripostes are delightful to watch, and the special effects amplify this sequence. As this is going on, Nhan gives her secret orders: Kill Book before it’s too late. 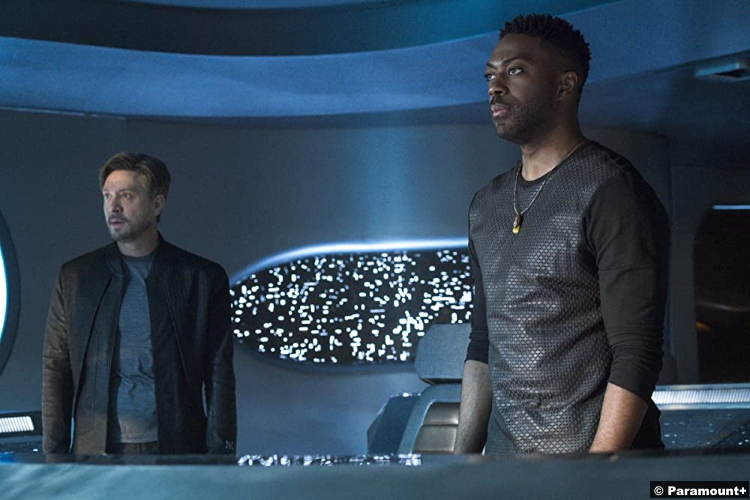 Of course, no one is about to follow those orders. Instead, the Captain sets Stamets and Zora on a scientific mission to see how long the DMA will take to mine the boronite in the area. She hopes knowing how long the DMA stays in this unpopulated sector will appease Book so that the Federation can attempt its First Contact mission.

It works. But then Tarka goes ballistic, damning Book in the process. Now, only if Ten-C are evil invaders can Book return without reprimand.

The theme of this episode is Compromise. It strives to show the audience methods to find common ground between extremes. The extremes here are Destroy the DMA and Contact the DMA. Fear and Death vs. Hope and Peace. But this doesn’t only play out between Burnham and Book. Several crew members on the Discovery bicker and argue over the same issue. And Bryce seemed right pissed at Rhys on the shuttle, but otherwise, I just didn’t feel it. This is where having some 32nd-century crew in the cast could serve a purpose.4

Similarly, Nhan’s role is antagonistic but doesn’t achieve a critical fulfilment of this role. She floats a suggestion that she worked for Section 31—the untrustworthy Federation black ops team heavily featured in Season 2. Hence the audience isn’t supposed to trust her judgment. But then Nhan nets no real results. She delivers one critical ultimatum before Stamets saves the day. I found it a bit of a shame that her return role was reduced to a naysayer. And an unconvincing one at that.

On the other hand, Saru has a different personal problem. The Ni’Var president T’Rina asked him on a date, and he doesn’t know what to do. I love seeing these small-scale problems that echo an episode’s larger theme. Mr. Saru goes to Dr. Culber for advice on how to let her down nicely, even though he does have feelings for her. Culber’s basically like, “You dummy, go get her!” 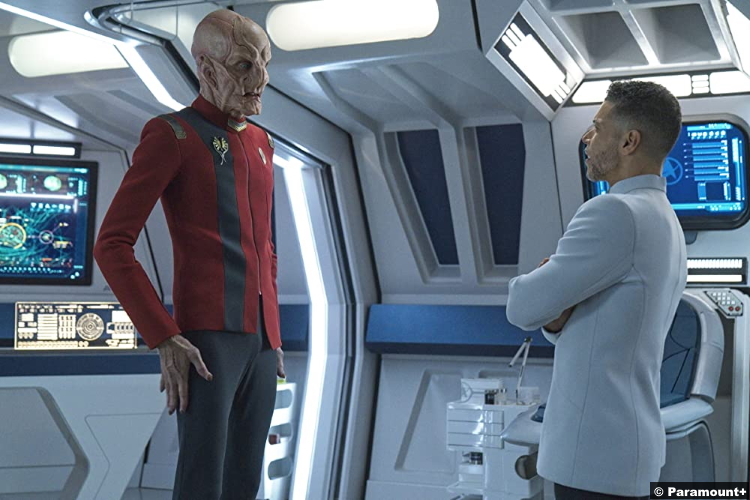 If I didn’t think Ruon Tarka was a manipulative villain, I’d concede that his tantrum was understandable. Book is not friendly or reasonable with him. First, Tarka stops the boarding party with his autonomous anti-intrusion shield. Then, he comes up with a way to save the people in the shuttle and still gets chewed out. Next, Book ignores Tarka about where to load the isolytic torpedo—though that may be Tarka gaslighting Book, since it occurs off-screen. And all the while, Book’s responses to Tarka are curt, imperative orders in contrast to Tarka’s calm soft tone.

Their conflict comes after Book concedes to Burnham’s plan. The DMA will stay for a week in this area, and if First Contact fails, then they can try to destroy the thing. This is not good enough for Tarka, and he initiates his secret plan to beam the bomb into the controller.

Yes, this is definitely not the space vessel of an evil alien species. Super friendly-looking, right?

All that’s for nothing, in the end. The DMA comes back as if nothing happened. This was handled a bit poorly, in my opinion. No immediate consequences arise from bombing the DMA. Yes, there’s the First Contact complication. And yes, Book has “crossed the Rubicon” in his relationship with Burnham (though to be fair, that’s on Tarka). But the DMA is just lounging and doing its thing. I mean, gimme at least a throwaway line about how the DMA was speeding up its mining process. Anything that delivers additional and unforeseen complications. A small fumble, to be certain.

7/10 – An episode that breaks immersion with depictions of Discovery crew falling into dispute. And though the ending punch isn’t a knockout, the main event between Burnham and Book picks up the slack.

1 The origin of this phrase is rooted in Julius Caesar’s coup d’état of the Roman Empire by bringing his armies into Italy across the Rubicon River. A deep thematic cut from historical reference into the divisiveness depicted in this episode. Mad props to Andi Armaganian.

2 Nhan left Discovery to be the caretaker of the USS Tikhov in S03E05 “Die Trying”.

3 Disclaimer: “Balance of Terror” is in my Top 5 TOS list. A stealth battle of intellects with major Cold War criticism that feels all too real right now. Check it out on Paramount Plus. I promise you it isn’t time wasted.

4 It really would be nice to see more aliens on board the Discovery.