“Where no one has gone before” …except the original Enterprise.

Captain Burnham takes her crew through the Galactic Barrier in a race against time. Contrary to my complaints at the end of last week’s review, the DMA has sped up its mining process. A new xenolinguistics character is quickly introduced, and the Discovery is sent off. David Cronenberg’s character jokes that the USS Discovery is to embark on a “3-hour tour” to initiate First Contact with Species Ten-C. For those few who don’t get the joke, that’s to say they’re likely to be stranded. 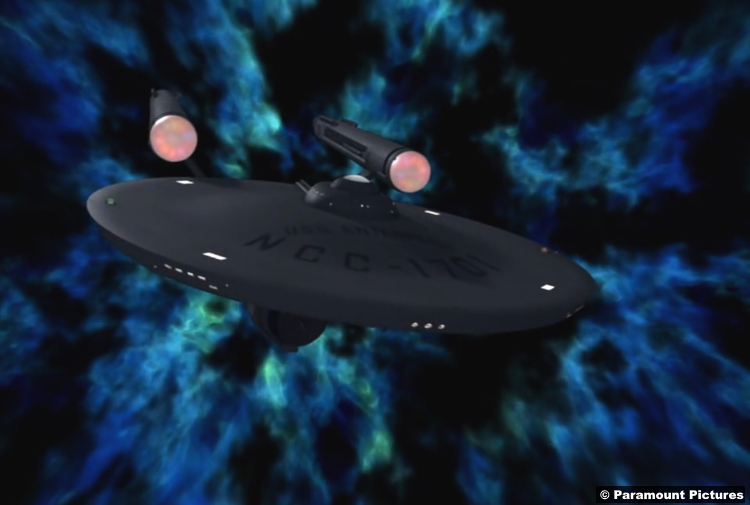 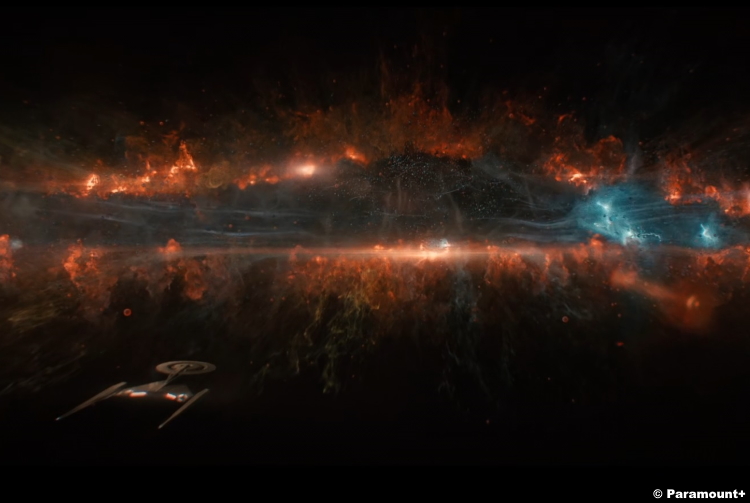 The Galactic Barrier: After more than half a century, we get our first special effects upgrade.

The central interpersonal complication to this A-plot is the inclusion of President Rillak to the diplomatic mission. Based on her vast experience, President Rillak elects to leave her Vice President in charge of the Federation, so she can assist with the First Contact. Also, looks pretty good to the voters when you try to save the Galaxy. (Joking, joking! This show has put a lot of effort this season into depicting President Rillak as someone viewers can trust.)

While the A-plot deals with the Discovery’s voyage through the Galactic Barrier, the B-plot deals primarily with Ruon Tarka’s past. Specifically, the episode introduces Oros: Tarka’s multiverse scientist buddy. This story is told through the present action of Book and Tarka seeking out a stash of programmable antimatter. Book has had it with Tarka and makes the tight-lipped scientist spill the beans.

The B-plot steals the show.

I have a documented history of vilifying Ruon Tarka. This episode has pulled that rug out from under me. Now, Tarka is empirically a complex character with motivations grounded in friendship. A series of flashbacks—interspersed with Book’s intimidations, questioning and finally acceptance—delivers the story of Tarka and Oros’s imprisonment together.  Osric Chau (Supernatural, Dirk Gently, Arrow) plays Oros, the genius that impressed even Tarka.

The flashbacks are a lens into Tarka’s psychology. The Emerald Chain put him in solitary confinement for years, for reasons unknown, before forcing him to work with Oros. The internal conflict for Tarka comes from his secret orders to learn about Oros’s hidden research. The reflection to Book and his conflict with his hallucinatory father earlier this season is a brilliant touch.

Not all that glitters is gold.

The Golden Ratio works as their symbol for hope of escape. The scientists’ number game leads to Oros telling Tarka about the multiverse research and Kayalise. From the way Oros describes Kayalise, it sounds more like the Nexus, the nonsensical extra-dimensional “heaven” in the film Star Trek: Generations, than another parallel universe.

The sentimental effect between Oros and Tarka has a beautifully tragic poignancy that I altogether never expected. However, part of me wants to rebel and cry out this is all a ruse. Bluntly, that’s just a dumb part of me. Discovery isn’t the kind of show to invent and dedicate such time to a story of hope and friendship to expose those fortunate qualities as lies.

Kudos to Anne Cofell Saunders for executing this incredible story of bondage and friendship.

Scenes of tenderness, like those shared between Tarka and Oros, pepper this episode: 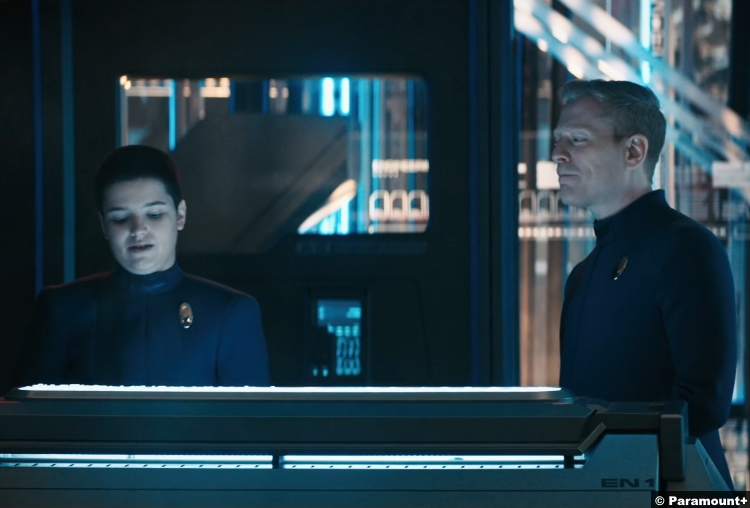 After a few episodes of absence, Adira Tal returns and Commander Stamets promptly embarrasses them in front of the high brass. His reasoning? He wished he’d had more support growing up, so he’s determined to make up for it. 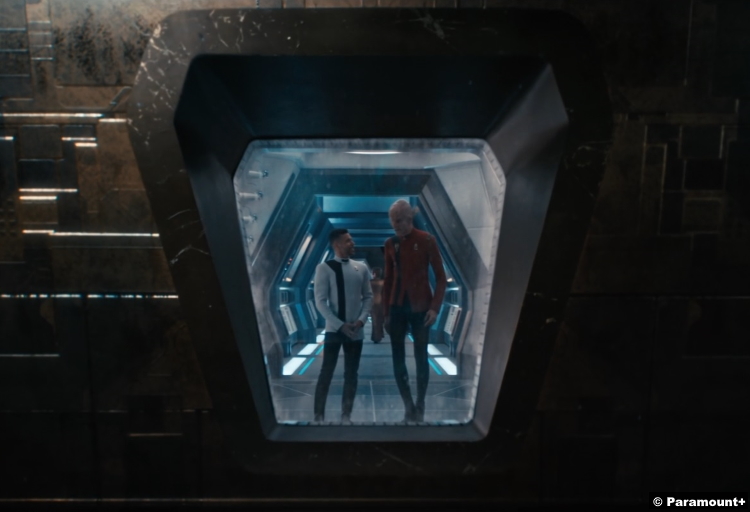 Saru feels embarrassed by his unreciprocated opening up to T’Rina, and Culber is just so chuffed. Culber tells Saru the start of a relationship is awkward for everyone, on both sides. Remember that it’s always not simple for everyone, and it becomes simpler. 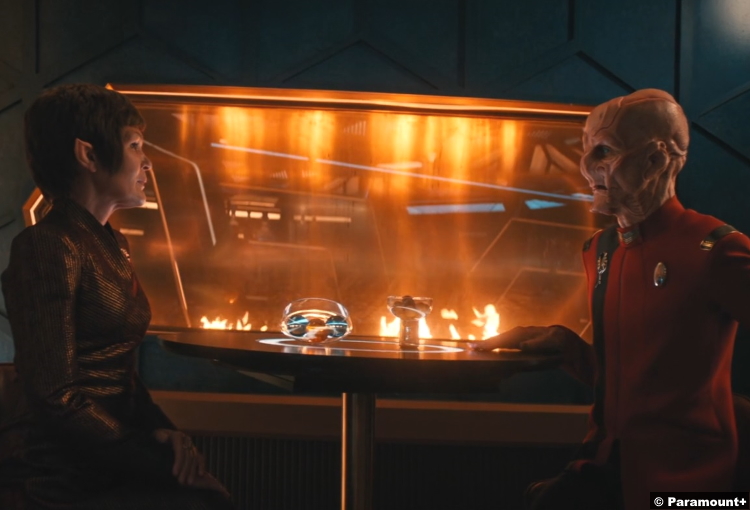 T’Rina asks Saru to sit with her because his presence is a comfort. Tara Rosling does an impeccable Vulcan, riding that bridge between emotion and logic. She uses her empathy, understanding and recognizing emotion in her fellow actors, to elicit an effective Vulcan emotion-not-emotion. Tara Rosling is awesome. 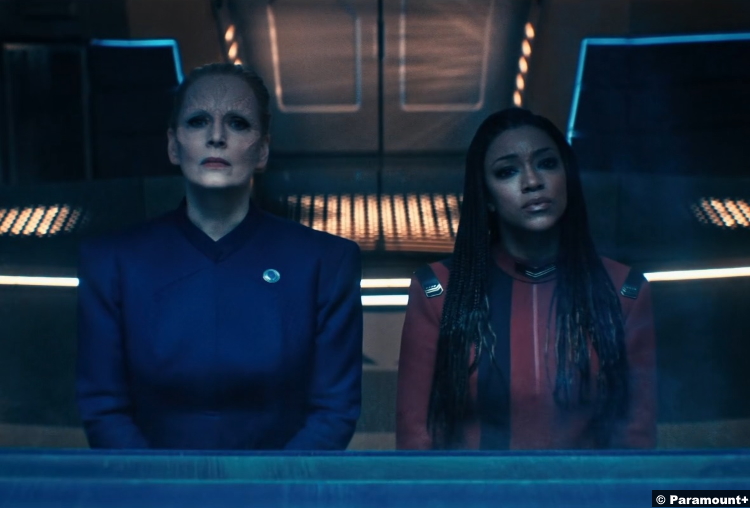 Finally, what started as a contest of power has become a friendship. Ten episodes in the making, Discovery shows its viewers even those who seem antagonistic to our goals can become our allies.

I used to take these emotional asides as a bit of cheesy feel-good blabbering that I wished would just speed up to get to the “good stuff”. Then after the six-week break, getting back into Season 4 made me realize how much I missed hearing the kindness between these characters. I can understand this sort of moment isn’t everyone’s cup of tea. I only ask others to try to understand that viewers can benefit from such touching moments.

Earth and Ni’Var at Risk

Of course, the ultimate crisis rears its head again in Star Trek: Discovery. Admiral Vance warns Captain Burnham and President Rillak that the DMA has moved onto a path to destroy Earth and Ni’Var in less than three days. Rillak doesn’t want to destroy the ship’s morale, but Burnham thinks they all have a right to know.

Meanwhile, the human crew of Discovery openly plans their next vacation on Earth on the bridge. Laying it on a bit thick, but whatever. By this point, epic-sized, existential threats are Discovery’s bread and butter. I almost expected one of them to crack, and laugh at their monumental bad luck.

Above all, Burnham must find a solution to the crisis in three episodes. Unless the climax of Season 4 spills over into the main conflict of Season 5—not an altogether impossible scenario. Indeed, it’s hard to ignore the strategic advantage of killing a planet of spore drive pilots and targeting the former founding members of the Federation. I guess we’ll see soon.

9/10 –Between the visual fanfare of revisiting the Galactic Barrier and the emotional strength of Tarka’s flashbacks of Oros, this episode hits hard. The Discovery nears First Contact. Book and Tarka aren’t far behind.  Eager to see where this takes us next week.