A stone’s throw from the end

After last week’s traversal of the Galactic Barrier, Captain Burnham embarks on an away mission to a destroyed planetary surface in search of a “Rosetta Stone” to ease First Contact with Species 10-C. Writing, set design and art direction for the alien civilization were my favorite aspects of this episode. The Captain brings Saru, Culber and Detmer through the ruins of a massive structure, and learns about the demise of these aliens through an invasive agent.

Meanwhile, Book and Tarka infiltrate the USS Discovery. (Strangely, there’s no mention of their own crossing of the Galactic Barrier. Nor do they detail how they caught up with the Starfleet ship despite their side-quest in the last episode.) Initially, their plan is to plant tech that will allow Book’s ship to hitch a ride on the Discovery’s hull unnoticed. Their spying serves as a framing device to glimpse different on-board politics and crew interactions. In the end, Book decides to recruit an ally in their goal to destroy the DMA.

The A-plot in “Rosetta” is the episode’s driving force. A clear focus remains intact throughout the increasing complications resulting in its profound conclusion. However, Book and Tarka’s B-plot is fragmented. The various windows into other character conflicts—C, D and E plots—disrupt the pacing. I must concede its terminus delivers an effective ending complication/twist.

First, let’s start with what this episode does well: alien encounters. In fact, they don’t even meet the aliens, and it’s still awesome. 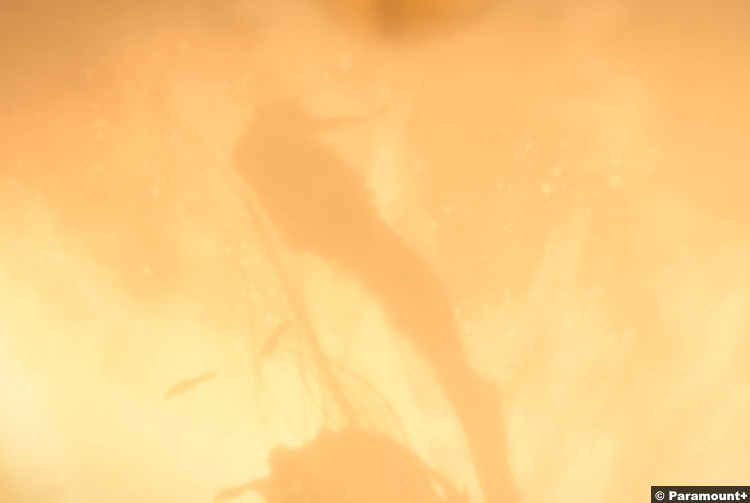 Psychic power is a theme Star Trek: Discovery has used quite frequently,1 and it’s freaky to see the sanity-bending effects. Horrible visions of fear and destruction assault Saru first. I loved the double dose of estrangement: fear, a dead alien emotion to Saru in an alien graveyard. Doug Jones nails this horrific resurrection from Saru’s traumatic past. His performance pulls you into the main conflict. All I wanted was more aliens! 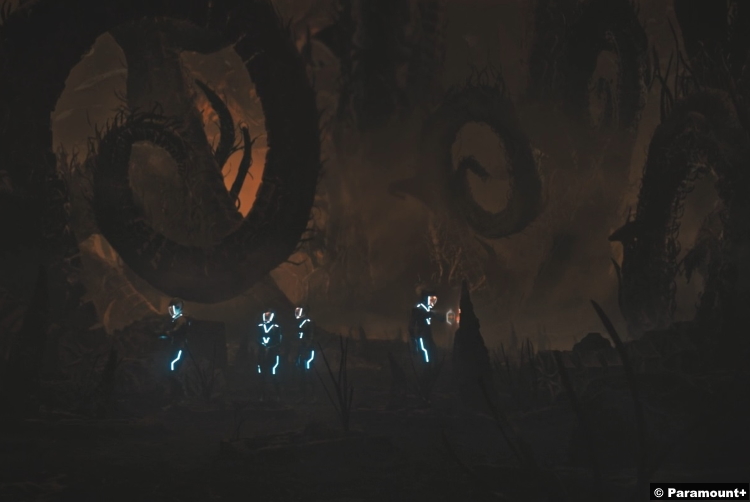 See all the tentacles? Leaning closer and closer to the Kelvans…

Next Counselor Culber succumbs. Last is Captain Burnham, who quickly orders Detmer to not move an inch. They actually rule out psychic or “infrasound” influences. As the three superior officers flip out, the stationary Detmer identifies the agent infiltrating their minds: a complex hydrocarbon residue all three come into physical contact with. Turns out this hydrocarbon is a pheromone-like substance that conveys emotions that humans and Kelpiens can understand. It’s the boon to their Contact mission they were looking for…. even if the work isn’t done.

The strongest moment of the entire episode comes when scans reveal the nature of the bodies in the structure. They are “children” of a sort, surrounded by a “love” pheromone.2 My greatest praise for the writing in this episode is giving Sonequa Martin-Green a chance to rise higher than the stately, diplomatically friendly captain’s role. People complained about Burnham being rough around the edges—and I do enjoy stately and supportive Captain Burnham a whole hell of a lot—but she got to show off her acting chops a lot more when she couldn’t keep it together!

Speaking of not keeping it together, the B-plot shows promise but flops. At the start, I wondered why the show spent so much time chatting about “Why are you doing this?” and diplomatic promises,3 but these inappropriate questions play into the voyeuristic aspect of Book and Tarka’s mission. 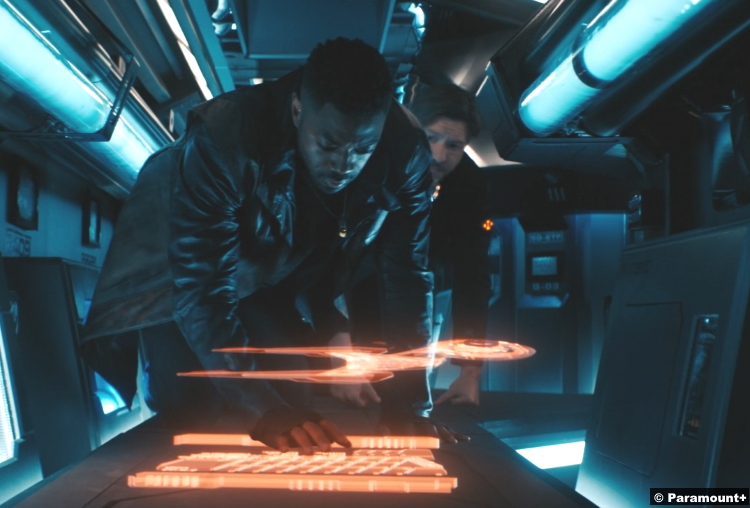 With a spy story, tension is paramount. Scenes into the political passengers’ quarrels play into the tension, but peeks at the Discovery crew’s lives break this suspense. For example, Rillak and Dr. Hirai, the astrolinguistics specialist (the new guy) side-chat is a bit too forward. I don’t know this guy, and the show hasn’t yet given us much reason to care about him. Likewise, I’m cool with Adira digging Detmer, but the scenes sow tonal dissonance with the main action. They filmed the scenes as distinct and unrelated to the B-plot action, even though Book and Tarka are literally spying on them. As a result, their framing device disserves the pacing. And it’s not just the pacing that bothered me.

During Burnham’s opening Captain’s Log about confronting 10-C, she says “As a captain, I have never been more afraid.” (Emphasis mine.)4 The episode hits this type of line again and again, through different characters. I don’t understand why this repeating danger signaling is necessary. Do viewers forget every week what’s going on? “Rosetta” continues to hit hard on the season’s keywords—Connect, Common Ground—in an unnatural way that feels like a corporate memo. At least these moments are short, isolated events throughout the rest of the episode.5

7/10 Wonky pacing for Book and Tarka’s bit neuters what should be a naturally suspenseful conflict. Luckily, the Away Team has the show’s art direction team pulling off an impressive display. And the super-cool alien stuff is only made better by the great acting and writing, saving this episode from dropping into mediocre territory.

2 I wonder now if 10-C are refugees from Kelvin attacks. There seemed to be two creatures in the outside visions.

3 Also, I don’t see why can’t they do both. On-board delegation attempts conversation with the hyperfield while Burnham does the away mission. Seems logical, no?

4 It serves well to remind viewers that Burnham has been the Captain of Discovery only since the end of Season 3. Out of her prior conflicts, I’d consider Control, the AI villain of Season 2, to be Burnham’s most dire moment so far in the series. Just to be clear, I thought Control was a boring villain. What’s more, I’ll never understand why Star Trek: Picard chose practically the same storyline…