No holds barred this week on Star Trek Discovery. After last week saw no progress on the DMA—the big mystery object of season four—in this episode, it is on the move. Only now, the Federation knows for certain the DMA is not a natural phenomenon.

In speculating who may be responsible, Admiral Vance unloads a litany of Star Trek lore references.1 He calls the operators “Species Ten-C”—a rather Borg-like designation, if you ask me.2 Then he sends the USS Discovery on a mission to evacuate non-Federation space habitats in the Radvek asteroid belt from the DMA’s path.

Once on the scene, Captain Burnham takes her partner Book on a prison break rescue op. Meanwhile, Stamets meets fellow mad scientist Ruon Tarka. They science bro-out and nearly destroy the Discovery. And throughout, Ship’s Counselor Culber goes through his own counseling.

Let’s start with Culber’s subplot. In an uncharacteristic turn, Culber starts a spat with Stamets. While Stamets takes it in stride, holo Cronenberg Dr. Kovich ain’t havin’ it. With deadpan hilarity, Kovich tells Culber he’s too busy for bullshit. I appreciate that he has Culber’s wellbeing in mind, but doesn’t get sentimental like most of the crew might. His method works, and Culber tells him he wants painful blunt honesty. 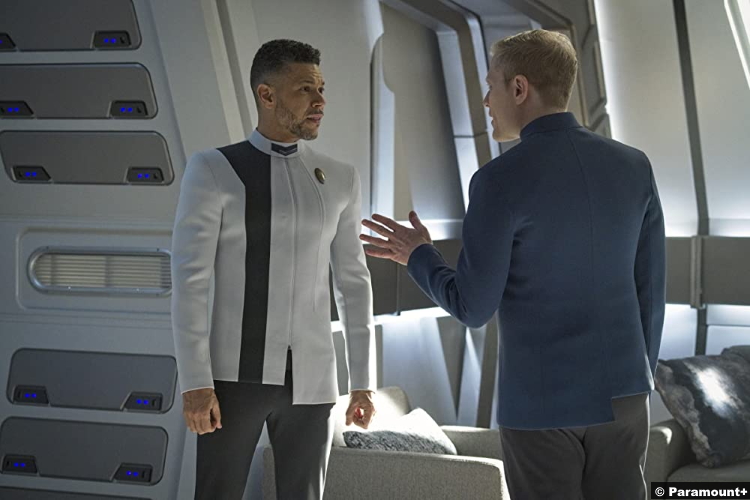 Kovich says Culber’s struggles aren’t about the DMA. He is “a middle finger” to everyone’s family losses for being alive. This is a meta-narrative moment—reacting to the many Star Trek resurrections3—but also a smart, psychologically sound response to survivor’s guilt. Only, in this case, Culber is the survivor of his own death.

In the closing moments of the episode, Culber and Stamets talk it out. The rapport these actors have built makes me smile from ear to ear. Just three small scenes, less than eight minutes, and for me, they were the most touching.

Captain Burnham quickly learns the Radvek Magistrate plans to leave six prisoners—the examples, “an Emerald Chain tradition”—to die in the oncoming cataclysm. Obviously, Burnham can’t allow any inhuman nonsense on her watch. Burnham and Book boogie down to the prison. 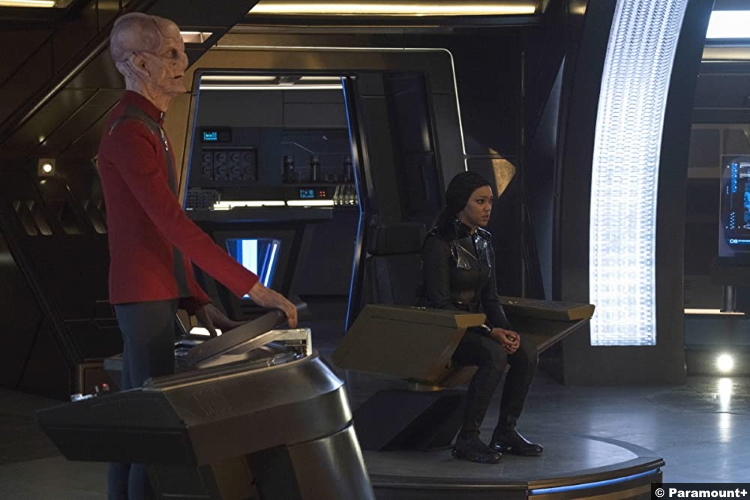 Upon arrival, they blow up a bunch of robot landmines camouflaged as beetles. Talk about war crimes, eh? The show wants to remind viewers how terrible The Emerald Chain was. To emphasize the point, these life imprisonment sentencings are arbitrary. One man stole food for his family, for example. Even the worst crime wouldn’t receive a life imprisonment in Federation space (but the circumstances wouldn’t even occur—I’ll get to that later).

Without access to the controls, Burnham figures they could fry the forcefield emitter. They’re running low on time, like always, and when they bust the prison bars, and the “examples” get out, they decide NOPE they won’t go. They refuse to remain prisoners. I was like, “Well, duh. Your government is inhumane.” To my great dismay, Burnham didn’t immediately offer them political asylum. She had to look up the protocol. After one last physical obstruction—Burnham calls the beetles to the rescue—Discovery beams up five of the six prisoners.

Felix, the final prisoner and ringleader, elects to stay. He believes he deserves death by DMA or imprisonment. His story? He was starving. A kind man fed him and gave him a place to sleep. Felix began to steal from the man during the night. The man heard him. They fought, and Felix killed him. Burnham honors his belief, and leaves him there.

Theft and murder of a person who wanted to help you is undeniably terrible. But Felix was a victim of social—perhaps state—violence, left to go hungry and unsheltered. The circumstances his society engendered provoked his crime. Justice is not found in allowing the cycle of loss to continue, but in true social rehabilitation. I wish Burnham could have made this clear to Felix, that he owed that girl a penance more meaningful than death. If anything, she could have made the argument for Book’s sake.

So what’s the deal with Ruon Tarka?

First, how about three rounds of applause for Shawn Doyle’s performance as the eccentric Ruon Tarka? Narcissistic, in your face, and hell-bent on discovering how to replicate the DMA. He takes Stamets’ first hypothesis—the primordial wormhole—and asks: What would this look like if it were artificial? So they build one. 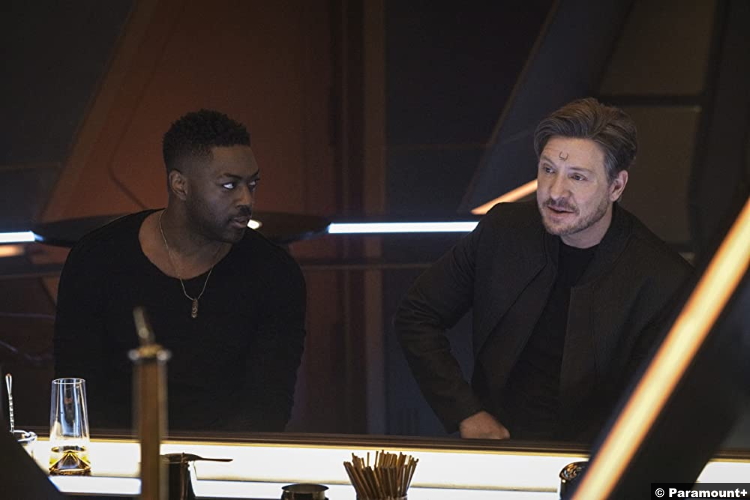 Now, I’m sure plenty of people are asking the question: Why couldn’t they wait until after the evacuation to run this incredibly dangerous experiment?

My answer: Star Trek does this all the time.4 Yes, it’s artificial tension building, but by now, it’s an honored Star Trek tradition.

That’s right, Tarka rocks up with schematics to build a miniature DMA. And then he cons Stamets into nearly blowing up the Discovery. Not suspicious at all! Luckily, Book sees through him… and sees something familiar. 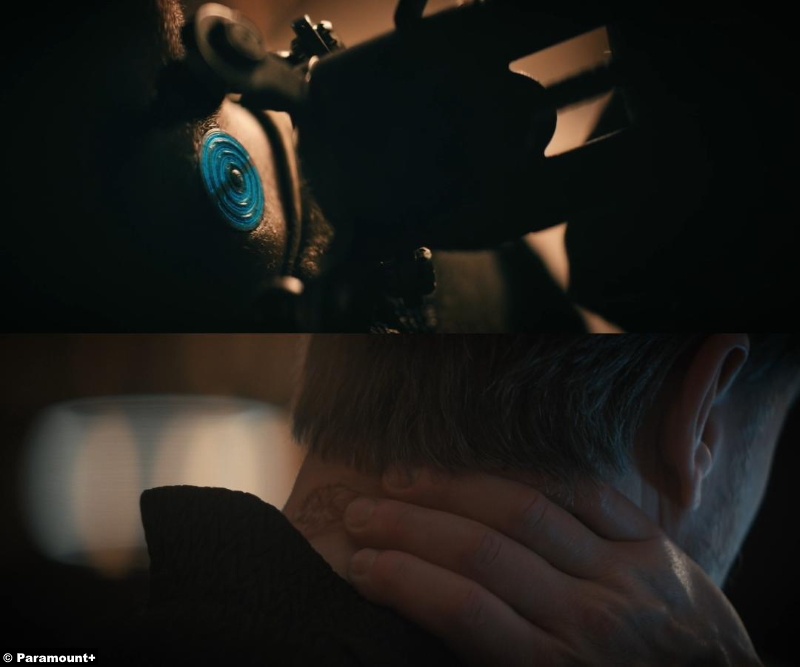 This could be a scar from an Emerald Chain slave implant, as seen in S03E06 “Scavengers”. Or any number of neck-associated Star Trek Apocrypha. But “slave implant” is where I’m putting my money. Tarka mentions the Emerald Chain and the neural lock to Stamets. To boot, the main plot makes it a point to vilify them too.

Many doors open to speculation in this episode. Is Tarka an outright villain? What pattern is in the DMA attacks? Why is the Emerald Chain so prominent? Here’s to hoping the writers keep it up for next week.

8/10 – All three plots this week are stellar, as each story retains a sharp focus for the entire episode. The Burnham and Book duo run off to save the day and face a classic Star Trek ethical dilemma. Though small, Culber addresses his work stress and shares over pillow-talk with Stamets. An unexpected highlight is Shawn Doyle’s charismatic performance as Ruon Tarka, which launches the season’s mystery forward.

1 Metrons are from the famous Kirk-fights-a-lizard-man (formerly, Gorn) TOS episode “Arena”. The Caretakers (Nacene) yanked the USS Voyager into the Delta Quadrant. The Iconian Empire is a deep cut; they were an extinct species in TNG’s “Contagion”. I guess they’re still kicking. And of course, Vance mentions the infamous Q Continuum, which are very likely to prominently feature in season two of Star Trek: Picard.

2 I don’t actually think this is related to 32nd century Borg in any way whatsoever, to be clear. Unless… they figured out how to use the Omega particle as an energy source? Nah, no way.

3 Star Trek: Lower Decks S02E03 “We’ll Always Have Tom Paris” makes a whole B-plot into a joke about this trope. I will say no more, just in case readers haven’t yet checked out Lower Decks.

4 Two examples off the top of my head: 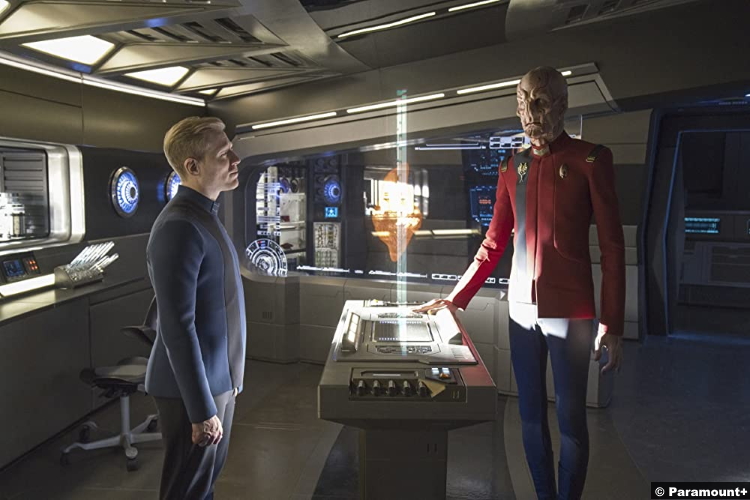