Episode 1, “Kobayashi Maru”, picks up several months after the end of the last season. The USS Discovery has been spore jumping from the dilithium planet to deliver the much-needed resource “no strings attached” to former Federation worlds in need. When sent on a rescue operation, the Federation President tags along, and the Discovery encounters a new planetary threat. It’s a gravitational anomaly which is likely to serve as the season’s mysterious Big Bad.

After an opening sequence reminiscent of Star Trek Beyond (2016), the A-plot has Captain Burnham dragging the United Federation of Planets president Laira Rillak on a distress call response to a deep space station that has begun to spin out of control. The B-plot concerns Book and his homeworld, Kwejian. (There are two short scenes with Saru on Kaminar as well.) Both stories have one thing in common: a gravitational distortion that wreaks havoc. Discovery isn’t able to save everyone from the space station, and barely make it out with their lives, and Book’s entire planet is destroyed. 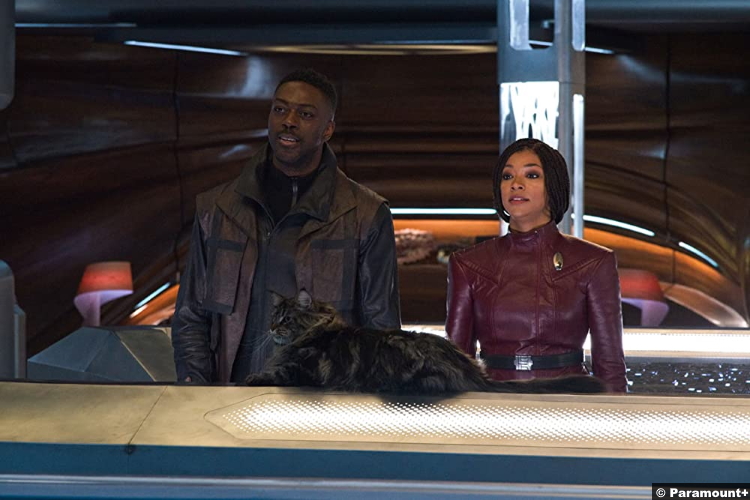 First, I’d like to defend the opening sequence because it differs in a major way from Star Trek Beyond: Captain Burnham succeeds in her diplomatic mission. Discovery fixes their satellite network, and they leave the gift of dilithium for the Alshain to use as they please. The Alshain Emperor is apologetic and befuddled by their help even through hostilities. Captain Burnham says that’s the Federation way, and the Federation will answer should they ever want to reach out. Yes, there are similar humor beats—and the humor works with the characters—but Burnham remains dedicated to making a connection.

The short scenes with Saru have a distinct point to make about connections too. Saru has lived on Kaminar with Su’Kal for the five months following the close of season three. He gives a speech urging the idea of home as vaster than their homeworld and suggests they “honor their interconnection” with the Federation. Then Su’Kal basically tells Saru to return to the Discovery, his outside family. So alongside connection, we have the paired—not necessarily opposing—institutions of Homeworld and Federation.

This connection is also evoked during the Kwejian coming of age ceremony. (Though, it is weird that a kid that little should be going through an adulthood rite, right?) The World Root, a plant that stretches all over the planet, is essential to this ritual which focuses on the insular. A notable absence is the skyward scope of Saru’s Kaminar speech. Connection on Kwejian is made without the Federation. That the episode ends with the planet’s destruction is a curious writing choice, considering how the writers treat Kwejian connection. Whether that’s intentional or thematically inconsistent remains to be seen.

Burnham and Discovery, swept away from the festivities1, send an away team comprising of Ensign Adira Tal and Lt. Tilly (yeah, that’s a promotion long overdue). There’s classic Star Trek problem-solving in action, and the highlight of this episode for me is seeing the excellent rapport between Captain Burnham and her crew. All’s going well until Burnham decides she’s best fit to jump into a “Worker Bee” to dislodge the debris blocking the only escape pod off the station. 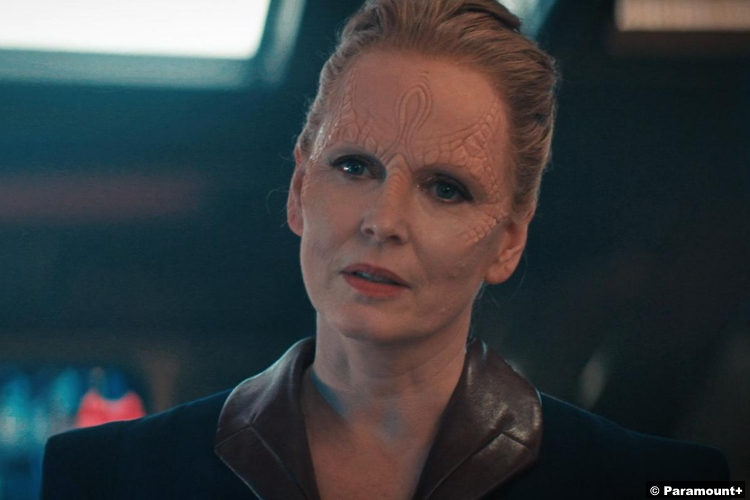 “A question doesn’t imply questioning, Captain.” What a Cardassian thing to say…

Burnham doesn’t like the president for vague reasons that boil down to ‘she’s a politician’. President Rillak is content to deepen that animosity by intervening with Burnham’s decision at this critical moment of the crisis. But when Burnham’s Bee is blown to bits and she’s reduced to her (very cool, automatically deployed) EVA suit, Commander Nalas melts down and puts a phaser in Tilly’s face. President Rillak talks down Nalas by reminding him of the beauty of his homeworld, again evoking the Homeworld/Federation dichotomy.

Rillak connects with Nalas. Burnham questions this connection by asking the president if she had actually been to Nalas’s homeworld, or if she’d just read his file. The president responds, “You’re wondering if I lied to him. […] Does it matter?” President Rillak makes a false connection with Commander Nalas. In the moment of the crisis, it doesn’t seem like this does matter, but following Rillak discrediting Burnham’s decision on the bridge for the second time during a critical moment2, Nalas dies. This episode wants to make clear that false connections are extremely dangerous.

Back at the Federation base, Burnham and Rillak discuss the Kobayashi Maru simulation, a famous Starfleet Academy test, and this episode’s namesake. The scenario has civilian freighter Kobayashi Maru­ sending a distress call after accidentally treading into enemy territory. Unknown to cadets, it is a no-win scenario3, and cadets become obsessive, trying, again and again, to save the freighter until they realize the only solution is their own destruction. It seems like this conversation sets the basis for Captain Burnham and President Rillak’s relationship, likely to be played out over the season. 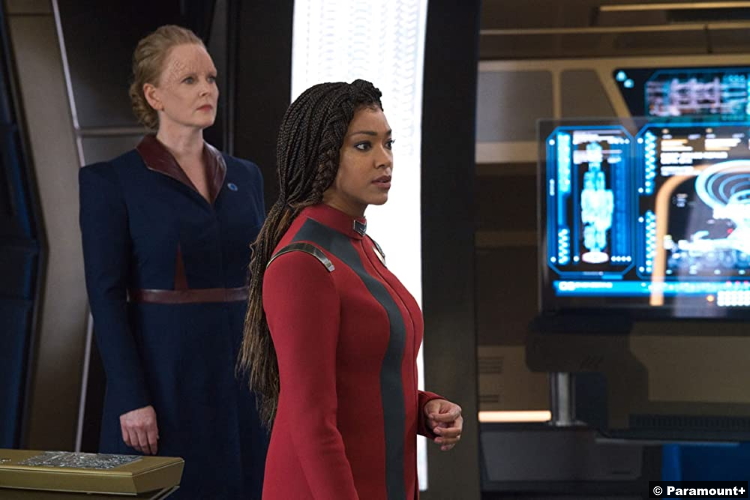 To evaluate Burnham’s position, let’s look at the first appearance of the Kobayashi Maru in Star Trek II: The Wrath of Khan. Naturally, James Kirk is the only cadet to find a solution, but that’s only because he hacked the program. For Kirk, it was not possible to accept a no-win situation (just like Burnham), so he “changed the conditions of the test”. From this precedent, I expect we’ll see how Burnham changes the conditions this season (especially considering she and Kirk are contemporaries).

Star Trek canon contains many interpretations of the purpose of the evaluation, and President Rillak gives hers in this episode: the Kobayashi Maru is supposed to teach the “acceptance [of] things beyond your control” which “trains you to avoid” “Pyrrhic victories”.  Rillak suggests Burnham isn’t yet able to make the hard calls that cost lives, a trait that could cause disaster on a starship. The interpretation I subscribe to is that the Kobayashi Maru is a test to make a cadet think about how to improve their command of a fatal situation. President Rillak’s perspective suggests she avoids difficult choices and prefers to make concessions.

This episode does a great job laying the framework for the season’s coming conflicts. Logic dictates that over a century of Federation absence will have made many worlds inward-looking, and ambivalent to contact, to reconnect. Chelah Horsdal’s debut as President Rillak is an exceptional performance as an ambiguous antagonist. I was dubious at first at the notion of a recurring presidential character, but this episode won me over.

The negative notes, for me, would be first the short, token scenes with Saru, and especially the gravity anomaly Big Bad. Another mystery off the bat, just like seasons two and three, and responsible for killing off Book’s planet, brother and nephew. I mean, come on, they saved Kwejian from the Emerald Chain last season! Extreme stakes are par for the course for Star Trek: Discovery, but that doesn’t make it less tiresome. Though despite my complaints, David Ajala gives a moving performance.

8/10 – “Kobayashi Maru” is the strongest season debut of the series. Finally, Captain Burnham holds the helm and handles it like a rock star. The writers lay out an inner conflict for the season’s themes, and how the president-antagonist plays into the conflict through the—by now, expected—high-stakes ultra-destructive mystery (again).

1 The inaugural celebrations include an awe-inspiring reveal of a new Starfleet starship being built in the Archer Spacedock, a wonderful nod to Star Trek: Enterprise fans replete with the show’s theme music.

2 From an in-universe perspective, it could be argued those lost seconds contributed to Nalas’s demise.

3 Considering how famous it seems to be, it’s pretty funny that the Kobayashi Maru continues to blindside cadets. Also, you’d think after 900+ years, the name would change or no one would know about it, but that’s Star Trek for ya.