I don’t normally do wrestling PPV reviews. There usually needs to be some kind of special circumstance or big happening to justify an article. I do continue to toil away with the SO OF COURSE previews for WWE PPVs but my enjoyment of all things WWE has taken such a nosedive lately it’s hard to muster up the energy. AEW, however, continues to delight and this weekend was my first opportunity to attend an AEW event. Originally scheduled for St. Louis (only a few hours away from my home), the Full Gear PPV promised to pay off the epic Adam Page vs The Elite storyline that’s been building for literal years. I wasn’t going to miss it. Even when the show moved many (many) miles north to Minneapolis, I knew I had to find a way to be there.

This is my review, not really for Full Gear, but for the whole experience of seeing AEW in person.

For context, I have been a pro wrestling fan since the summer of 1999. I have been to numerous live events by the WWE. I’ve been to RAW shows, to SmackDown shows, to RAW1000, to NXT Takeovers, to WrestleManias 31 and 32 and the epic Raw After WrestleMania shows that followed. I’ve seen enough to judge the modern product from a live entertainment standpoint and the fact is, when WWE is both a hot product and is paying off good storytelling, there are few things better. Take away just one of those two things and everything suffers. WrestleMania 31 was hardly a show with good storytelling, but there was a palpable excitement from the crowd that buoyed everything. Being there live, I thought it was one of the best Mania shows ever, so I was shocked to read the reviews from people who watched it at home and called the show underwhelming. On the other hand, WrestleMania 32 had neither a hot crowd nor good storytelling, and there was no saving that slog of a show.

Those rare times when a show is great across the board—when the greatness reaches beyond the TV screen and into people’s homes—is a rare occasion in WWE. It happened at WrestleMania 30, for example, but not 29, and so on. I believe that one of the biggest sources of consternation amongst the WWE fanbase is the fact that we know the company is capable of putting on a great show regularly because we have seen great shows before and we’ve seen what went into those shows being great. The trouble is WWE seems too content to go lazily through the motions and only on rare occasions bust out a genuinely magical night.

There’s a saying often associated with pro wrestling, but really it needs to be specifically limited to WWE:

WWE is usually terrible, but when it’s great there’s nothing better.

The truth is, I don’t have to hate-watch WWE anymore. I can leave it be and move on with my life…but I don’t because I know if I hold out for a little longer, they will eventually hit me with a magic moment that sucks me back in. I must admit, though, that the amount of “back in” I get diminishes each time. Right now it’s barely moving the needle for me. Fortunately, there is big-time competition now, and the means to watch a North American promotion that isn’t content to go lazily through the motions. AEW has given me a show I can look forward to week after week. They’ve given me a product that gives me my “fix” and lets me mostly ignore WWE until I must do the necessary, bare minimum amount of work to cover the company.

AEW, unlike WWE, is not “usually terrible.”

They do occasionally misfire, and they have experienced the expected growing pains of a new company starting from scratch. It’s worth remembering that when the first episode of Nitro went live on TNT, WCW had existed for years under Turner’s ownership and years before that as Jim Crockett Promotions and Georgia Championship Wrestling. A sizeable foundation was already in place. AEW Dynamite had a few months of press releases and a handful of PPV events to their name, and a handful of talent from Ring of Honor and New Japan Pro Wrestling (oh, and Chris Jericho to bring a measure of legitimacy). That’s it. What they did to succeed where everyone else either failed to launch or just failed to catch on was they had the money to sign a bonafide roster, and they had the humility to give the fans what they wanted.

Little did we know three years ago that we wanted Hangman Adam Page. 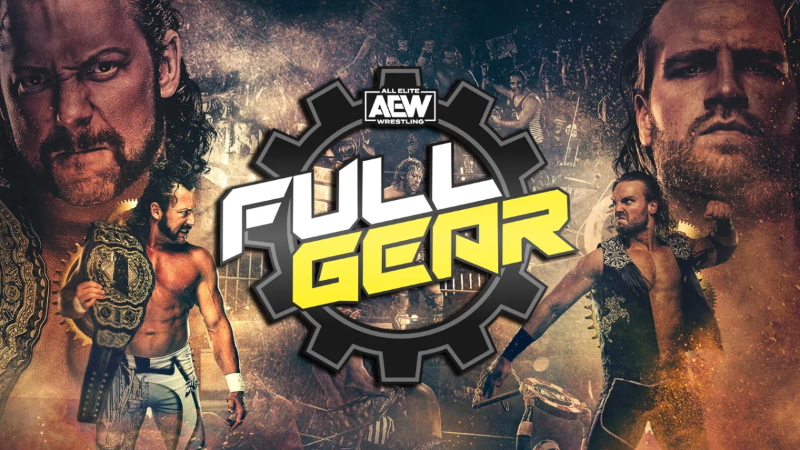 Along with Chris Jericho, Hangman Adam Page was the first man to wrestle for the AEW World Championship. At the time he was, to non-NJPW viewers, a mid-card looking, average performer, with a fine enough look, solid enough skill, and not much pizazz to him. After losing to Jericho, he began a storyline that led to him losing his friends, gaining new ones, losing his confidence, gaining it back, and finally winning the world title to a seismic eruption of cheers and an in-ring celebration reminiscent of Bret Hart at the close of WrestleMania X.

Along the way, as the company’s place as a TV fixture solidified, AEW added many big-name performers to bolster their roster: Jon Moxley, Sting, Miro, CM Punk, Adam Cole, Brian Danielson, and more. Again the company avoided the mistakes of other would-be WWE challengers, by not hot-shotting the title to these new hot names, but instead keeping the focus on the slow-building storylines that have been in place, in some cases from the foundation of the company. That patience and commitment to the fans paid off in spades at Full Gear, and with the crowning of Adam Page as the company’s fourth world champion. 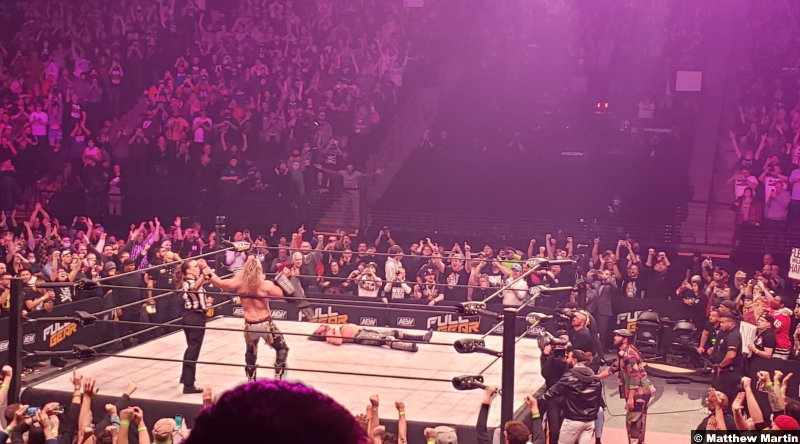 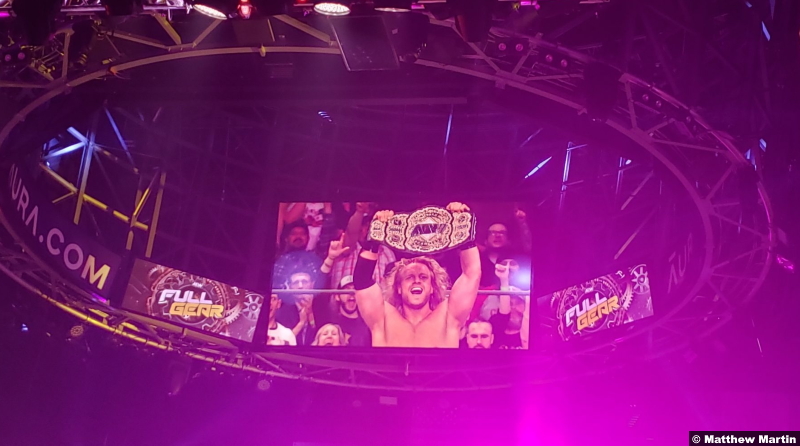 As for what it was like to be there live, in comparison and contrast to a WWE show, I can offer three key notes that stood out the most.

First, the way AEW mics up the ring is very different from WWE. On a WWE show, impacts on the mat have a distinctive and unmistakable “wobble” sound, due not so much to the way the rings are constructed (there’s very little difference there) but to the placement (and possible number) of microphones underneath. It’s audible comfort food, after so many years of hearing it, but it’s not the most ear-catching. In AEW, when someone hits the mat, it sounds like a cannon has been fired in the arena. It makes every impact…impactful, which keeps your attention and your eyes on the match at hand at all times.

Second, AEW genuinely loves its fans. It’s not afraid to let the heel go over, don’t misunderstand, but there’s always a purpose and there’s always an endgame. There’s always the promise that, eventually, the babyface will get his or her victory as they should. In WWE, hometown performers are frequently sent out to get a “welcome home” pop and then lose. In WWE, matches with stakes frequently end in disqualifications. In WWE, long, boring stretches of nothingness happen, in which in-ring promos are cut, leading to more in-ring promos, leading to a commercial break, then a tag match, then a DQ finish. Disappointment reigns and there is only rarely ever any positive payoff to make it all worth it. In AEW, the old cliched comment “lets see where this goes, there may be a plan here” actually has meaning. There usually is a plan, and it usually ends satisfyingly for the fans. Even this weekend, which saw Orange Cassidy seemingly-inexplicably losing to Matt Hardy, the supposed end of the feud was anything but; we’re getting Ishii and potentially Okada from New Japan to come to bring the story to a close. Nevermind the fact that Hangman Page has been knocked down a dozen times on his long road to the title. On that note, it is amazing to think about how the fans never gave up on the story. They bought in and believed it would satisfy in the end, so they let themselves be taken for the roller coaster ride. That simply doesn’t happen in WWE. In WWE, fans gripe every step of the way. Why? Because they’re stupid? Because they’re spoiled? No, because they’re jaded! They’ve been conditioned to be disappointed so they’ve become cynical. And 99% of the time, their cynicism is proven to have been justified. In AEW, 99% of their faith in the promotion pays off. You could feel that in the air at Full Gear.

Third, and speaking of, the fans at AEW shows are, to use the phrase, “All in” on the company. Every heel and every babyface, from top to bottom, gets a big reaction, not only for their music but for their matches. Obviously, some get bigger pops and boos than others, but that’s a given. The point is you don’t find people sitting on their hands or staring at their phones in the middle of a match. AEW is very much the second coming and the lovechild of WCW and ECW, possessing the former’s bankroll and the latter’s rabid fanbase. I know that fanbase can be off-putting at times, but it comes from a fervent desire to see the company grow out of its infancy and become a major contender in the Pro Wrestling world. Arguably it already is, but it’s obviously not drawing WWE’s ratings yet. 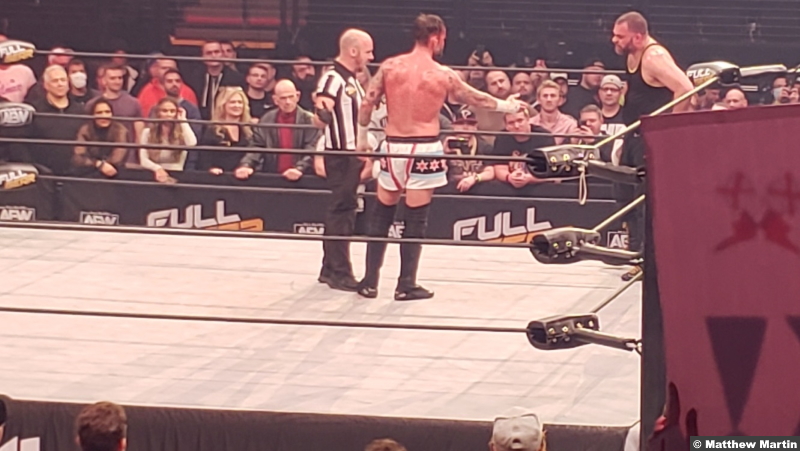 All that said, I would like to address one criticism I see bandied about here and there online, and that is the remark uttered by the so-called AEW fan who refuses to watch the shows because the fanbase is so toxic. Forgive me for calling someone a liar but the idea that someone genuinely likes something but refuses to watch it because some of its fans are mean is either the most pathetic weak sauce nonsense I’ve ever heard, or is just a silly WWE-only fan doing a “concern troll” bit. Name me something else, anything else, that anyone has ever refused to watch despite liking it, just because other fans are jerks. Every fanbase has toxic elements. Star Wars, Marvel/DC, musicians/bands, etc. No one has ever said, “I love Marvel movies but I refuse to watch because their fans are so obnoxious.”

Give me a break.

This past weekend, AEW held the Full Gear PPV. It was a killer show without a bad match on the card, crowned a new standard-bearer for the company, and reminded the wrestling world that this company is here to stay.