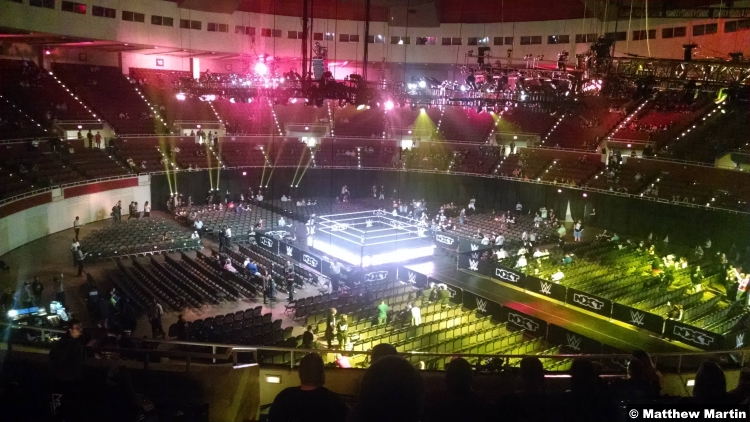 “WrestleMania” used to be about one Sunday in late March or early April. For the first quarter of its existence it was simply the biggest show of the year for the WWF. After it was over, the show went back on the road for house shows, occasional TV tapings and other live events.

In 1993, the WWF launched Monday Night Raw and changed the way pro wrestling appears on television. The lead up to WrestleMania IX felt longer, with more happening and a slower, steadier build up to the event than any of the previous eight years enjoyed. But still, for several years, the Raw after WrestleMania was just “Raw…after WrestleMania.” There was fallout from the big show as some characters naturally moved in a new direction, but the show was basically like any other that the company ran for fifty two weeks a year.

Then, in 2004, the WWE brought back the Hall of Fame and made it a staple of the WrestleMania festivities. The biggest show of the year became the biggest weekend of the year for the WWE as Saturday night joined the party in offering fans something to enjoy.

It’s hard to pinpoint when exactly the “Raw after WrestleMania” because the now-legendary yearly spectacle it now is, but it probably started around WrestleMania 28. You can go back a little bit to the show after Mania 24, when the company spent the whole night giving Ric Flair a heroes send-off. The next year added another wrinkle to the R.A.W. show: The surprise debut/return; it was on that show that Batista made his return from injury hiatus and attacked Randy Orton. The next year offered an emotional sendoff for the recently-retired Shawn Michaels and the Raw after Mania 27 kicked off the year-long Rock vs Cena feud. But it was the show after Mania 28 when R.A.W. really became what it is today. That show saw the crowd hijack the night with chants for Daniel Bryan, essentially turning him into a made man after his humiliating loss to Sheamus the night before. The crowd did it again the next year, with a thunderous celebration of Dolph Ziggler’s World Heavyweight Championship victory. By 2014 the company had caught on to the fact that the post-Mania crowd was a part of the show, and they booked around the crowd, offering hardcore-fan-pleasing matches, with debuts and surprises sprinkled throughout the night. As a result, the Raw after WrestleMania show became the hottest ticket of the weekend, as only a tenth of the WrestleMania crowd would be able to secure seats to the event. WrestleMania had become a huge three-night spectacular.

Now the “weekend” is anything but. Now “WrestleMania” encompasses fun and events that stretch from Friday to Monday: For four days and nights, fans can take in a miniature Disney World-like celebration of all that is good and fun about pro wrestling. There’s Axxess, there’s a huge super store, there’s autograph signings and meet-and-greets all over the hosting city. And the main event for the first of WrestleMania’s four night special is N…X…T. 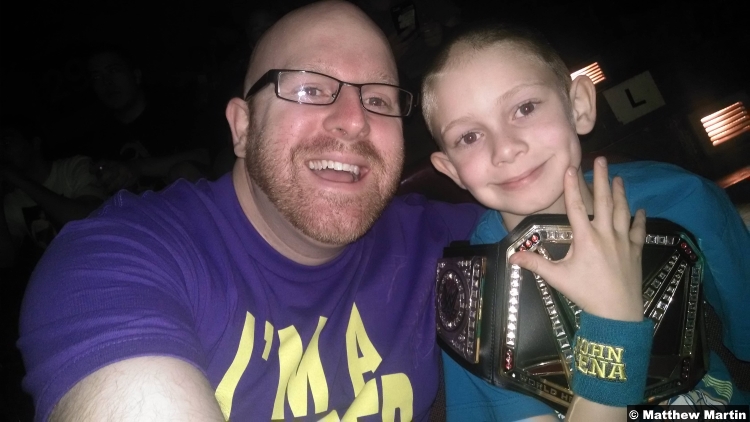 Last year they teased us. Last year NXT was celebrating its one year “coming out” anniversary. A year prior the first NXT WWE Network Special aired and over the course of the year (2014) the brand blossomed into a must-see pro wrestling show. By the time it did so, plans for WrestleMania 31 had already been set in stone, but some last minute scheduling allowed for an untelevised NXT show to take place at a small San Jose arena. It only allowed for 5,000 spectators (still the biggest NXT show to that point), the event was scheduled for late in the evening on Friday and tickets went on sale only a couple months before the event, but they sold out instantly and NXT rocked the WrestleMania event with many who were there (including me) saying it maybe was the best show of the whole weekend.

One year later the brand had become more than just an underground favorite. It had become the show to watch on the WWE Network, with great characters, logical storylines, and amazing matches. NXT reached its apex in 2015 with the Takeover:Brooklyn show, as WWE sold out the Barclays Center in New York for three nights (Takeover, SummerSlam and Raw) and NXT put on the best show of the weekend. There was no doubt after Brooklyn that NXT would have a proper place on WrestleMania weekend, and sure enough, when tickets went on sale NXT was scheduled to have it’s own Takeover special in Dallas to air on the WWE Network.

And wouldn’tcha know it: NXT did it again. With Takeover: Dallas, the little yellow “developmental” brand put on, not only the best show of the weekend, but so far the best show of the year, highlighted by the current Match of the Year. There were five (main show) matches and each one of them delivered in their own way.

American Alpha accomplished what the previous “most beloved Tag Team in NXT” (Enzo and Cass) could not: they unseated the reigning tag champs, Dash and Dawson (The Revival). This was the perfect match to open the show as it gave a hot crowd exactly what they wanted: a hot match. The audience would have been jacked for anything NXT had to offer that night, and really none of the matches failed to deliver, but this was the best of the five to open with. It featured big spots, fast action and a title change to a beloved act. Excellent beginning.

When Austin Aries is making his debut and it’s the least-anticipated match of the night, you’ve got an amazing card on your hands. This was a great debut for Aries as he worked a very WWE-style “little vs big” match but never looked like he didn’t belong in the same ring with the larger (and less-skilled Corbin). Baron Corbin on the other hand held his own against the faster and more experienced Aries, continuing his recent run as someone who has had the lightbulb “go off” where his in-ring has caught up to his great character. He’s on the main-roster now, but at the time this looked like first act in their feud. If it had been it would have been a good one, instead Aries will move on to someone else on NXT and Corbin will start earning a well-deserved main-roster paycheck. This was a really really good match on a card loaded with excellent ones.

Sami Zayn wrestled Shinsuke Nakamura and I saw it in person.

Happy beard guy, the face of NXT and my favorite wrestler in the brand, wrestled 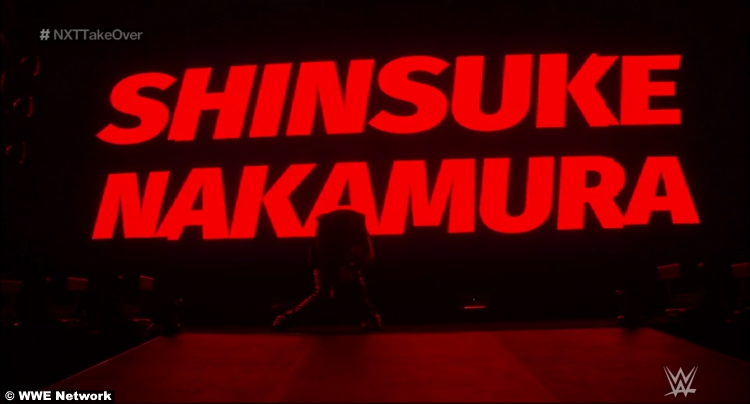 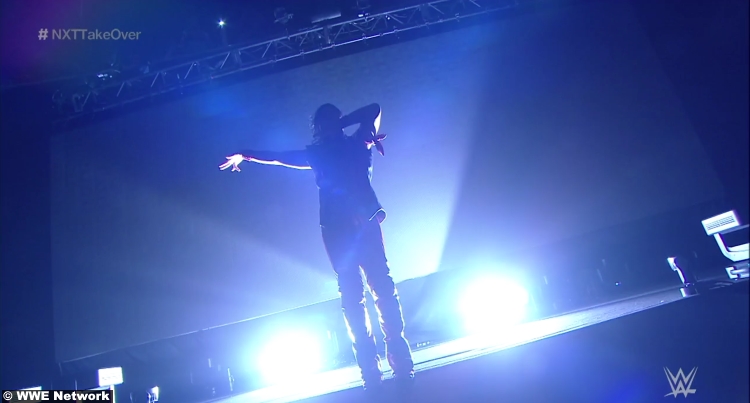 His theme music is like the most epic boss fight in a Japanese RPG.

What do you want me to say? The match reigns supreme. Match of this year. Match of last year. Match of all the years. Find it and watch it. It’s on the network. It’s worth the whole $9.99 all by itself.

And then Asuka went and ripped my heart out by handing Bayley her most devastating defeat yet.

Look Bayley’s character is basically surfer Sting. I mean she basically cosplayed as him at Takeover. So naturally, like Surfer Sting would, she wins the fans but not the title, until she finally wins the title and then she loses it in soul-crushing fashion. I didn’t want this to happen. I liked Asuka beating up people like Emma and Dana Brooke and teasing matches with Nia Jax. I don’t want her destroying heroes; it hurts my heart too much. But if someone has to take the title off Bayley, let it be someone who can do it based on simple skill and not some cheap, Eva Marie shenanigans. I expected a Bayley call up but it didn’t happen on Raw so I don’t expect it now until at least SummerSlam weekend. Which means NXT has a story to tell and I have full confidence that they will tell it right.

So last year I took my pregnant wife and left my two older boys at home. This year we left the baby at home (with my mom…we didn’t just…leave him, ya know) and took the boys. My older son, Jack, is the bigger fan and he was excited to “see all the wrestling I can” as he put it. So I took him Friday night to the Takeover show and left Caleb to play in the hotel pool. As you saw in the video earlier Jack was very excited…but he’s still a child. And as the night wore on he grew more and more tired. By the time the main event was getting ready to happen he was almost passed out. I couldn’t just leave him in the uncomfortable chair so we left. I was dying to see Finn Balor vs Samoa Joe but my kid comes first, so we left and while we waited for our ride, I let him sleep on a couch in the lobby of the arena while I watched the match on my phone. 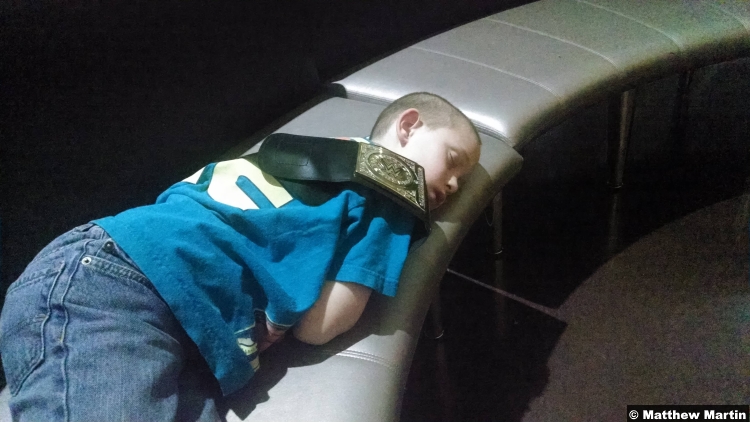 I could hear the crowd reacting as I watched an incredible match on my four inch screen. Even with such a small display I could feel the excitement in the crowd and the match was every bit as great as I knew it would be. I was legit shocked at the finish too as I thought Samoa Joe earned the title after a great past few months and I thought the story was simply told with him winning. Once again I have total faith in NXT’s creative team so I know they will have something good in store for both Joe and the continuing champion, Finn Balor.

The event began at 8:30 or so (with a couple dark matches) and ended at about 11:30. It was literally less than half the length that WrestleMania’s whole show ended up being, but without a doubt it surpassed the biggest show of the year and solidified its place as the must-see event on WrestleMania weekend. I heard some fans around me saying that they missed the NXT show last year because they had already made plans to attend some of the indie shows around town, but after seeing Takeover this year, they will never miss another one.

10/10 show. This aint “development” anymore. WrestleMania weekend got off to the best start imaginable.