That’s the best bit of advice I can give anyone who is even considering a trip to WrestleMania. If you are even a casual fan you will enjoy yourself, although the casual fan may find the back-to-back-to-back-to-back wrestling shows a bit too much, and the price is certainly not in the ballpark of the typical casual fan.

Most certainly, if you are a hardcore fan, and you can afford it, DO IT. If you can’t afford it, in the sense that you can’t non chalantly drop $2,000 (which does not include airfare and other expenses) on a pair of silver package tickets to Axxess, the Hall of Fame, WrestleMania and Raw the next night, then consider saving and saving and saving. If you are a hardcore fan and you’ve never gone, take it from someone who has been a die hard WWF/E junkie since 1999: I have watched every WrestleMania, from the mediocre WrestleMania 2000 to the marvelous WrestleMania XXX. I thought I could go my life without being there live, but after going to WrestleMania 31, I can’t imagine ever watching it at home again. I can’t imagine not participating in all of the festivities from now on.

So let’s say you’re on the fence and you would like to go to, say, WrestleMania 32, next year in Dallas. Should you? What does the experience really offer? What’s it like being there in the flesh as opposed to simply watching the two big shows live and catching replays and highlight videos of all the rest?

Consider this your official “here’s why you should totally sell your old action figure collection and buy tickets to WrestleMania” look back on the spectacle that was WrestleMania 31.

To start with there was Axxess.

Actually, for me, it all started with a plane trip to San Francisco on the Wednesday before the big show. The only way I was able to convince my wife to let me..er..us…fly almost entirely across the country was by attaching to the trip a few days in the Golden Gate City as a celebration of our ten year wedding anniversary. 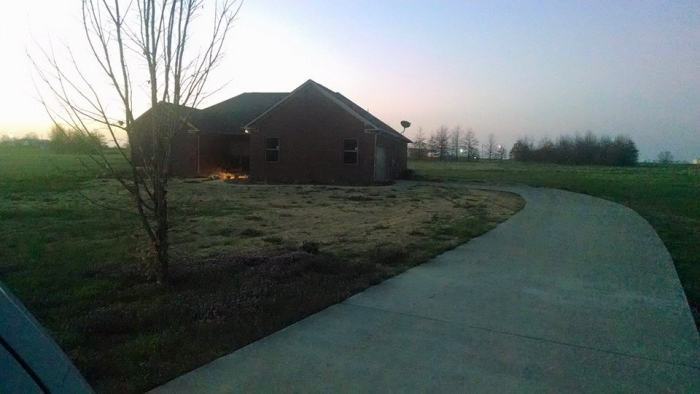 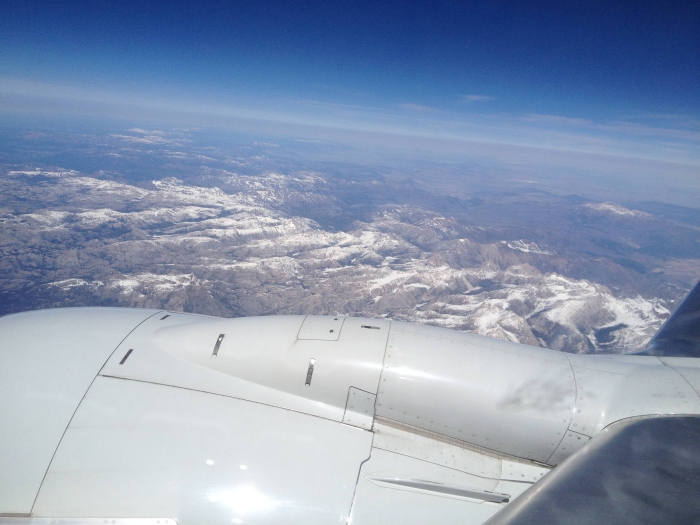 The long flight from Arkansas to San Francisco

Tallying up the expenses of the entire brouhaha, we spent a total of $5,000, all told. It was much easier to avoid her murdering me when I could say “yeah, but it’s our ten year anniversary!” So we did all the touristy things that you can’t do in San Jose. 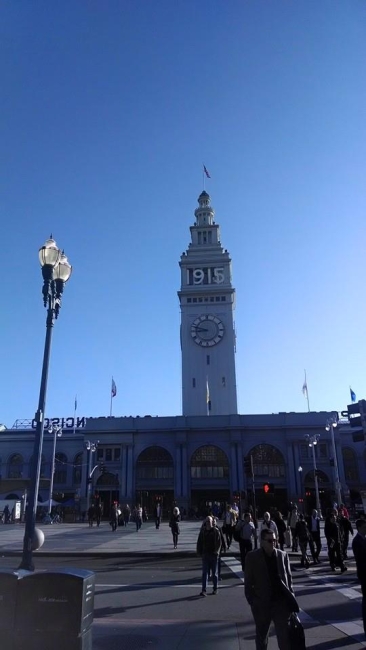 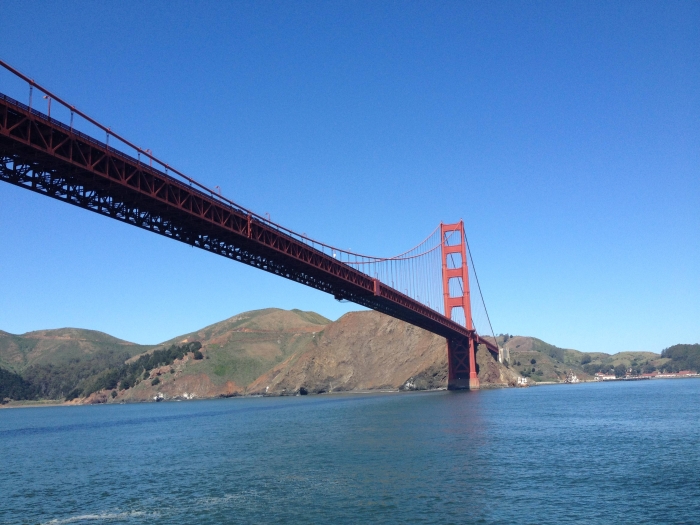 The view of the Bridge from our ferry around Alcatraz 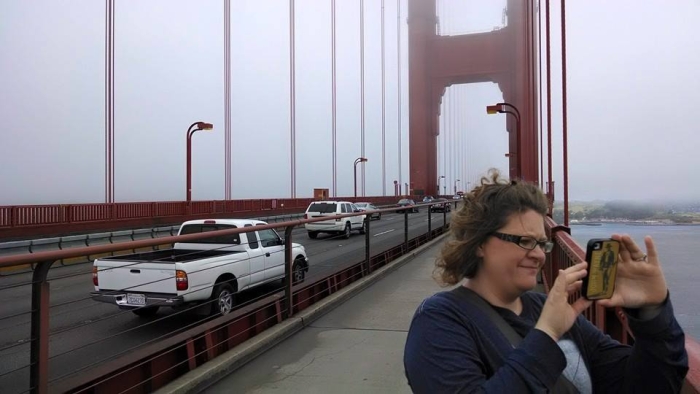 My wife taking pictures on her John Wayne phone

We rode the trolley, we walked the Golden Gate Bridge, we gave money to beggars, we ate Ghirardelli chocolate, we strolled Fisherman’s Wharf, we took a cruise around Alcatraz and the Bay, we admired Sea Lions and slept for two nights in what was supposed to be a famously haunted hotel (The Whitcomb). The hotel wasn’t scary though, unless you count my wife’s hairdryer causing the power to short out in our room.

The very old Hotel Whitcomb. Unfortunately, no Ghostbusters needed to be called 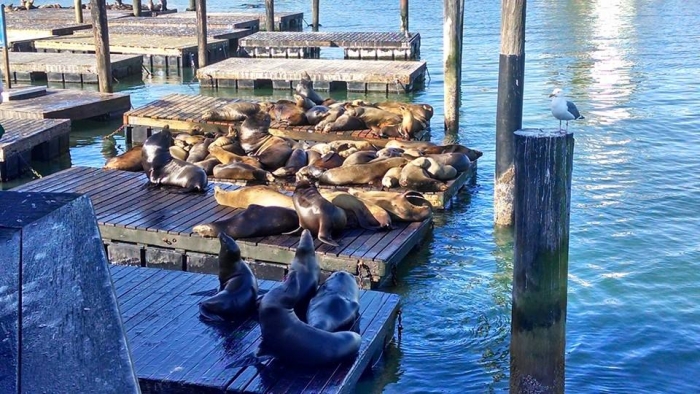 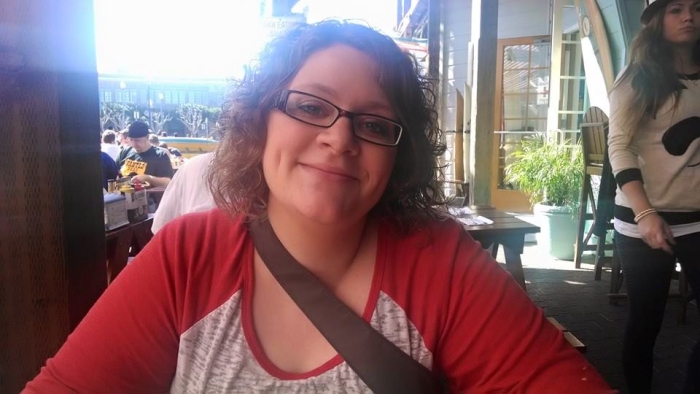 Me and my lovely wife enjoying lunch. Notice the Foley fan in the background. WWE fans took over the west coast 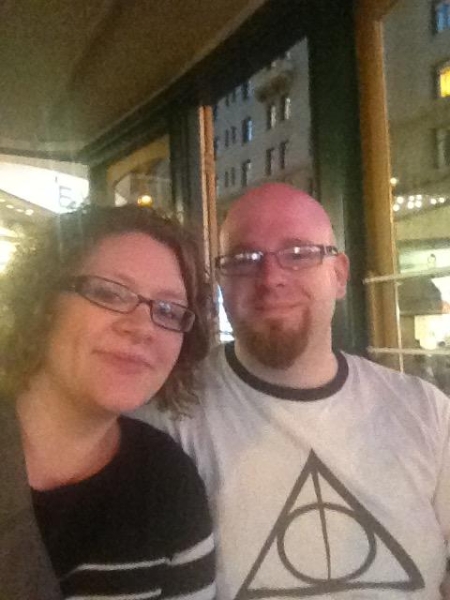 After a few days, which felt like an eternity because I had all my wrestling t-shirts neatly folded in my suitcase awaiting my arrival to San Jose, we finally boarded a train to the site of Axxess, NXT, the Hall of Fame and Raw. Stepping off the train was like stepping into another world. Suddenly it seemed everyone was a wrestling fan. Austin t-shirts, Cena hats, Bayley arm tassels, replica titles sling over arms and worn around waists with nary a blush or an embarrassed look to be found.

Even I got to be a proud wrestling fan. 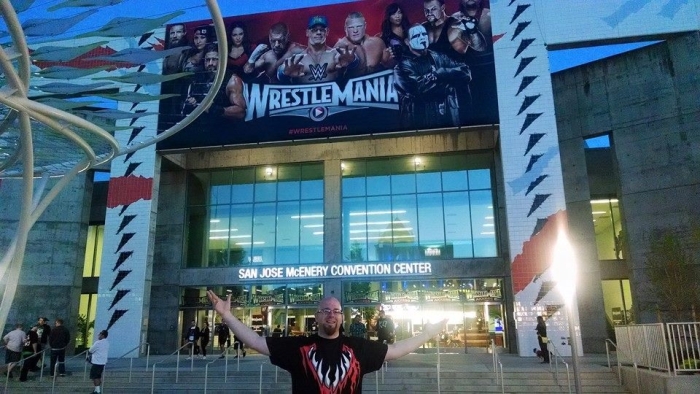 Outside Axxess and the SuperStore

It was like someone reached into the mythical IWC and created a fully three-dimensional world out of its inhabitants.

The Hilton adjacent to the Axxess Convention center seemed entirely occupied by WrestleMania adventurers. Giant WrestleMania banners hung around the city and both inside and outside the hotel. Everything from the room key the staff handed me, to the shirts the staff wore: All of it was emblazoned with the cool grey and red WrestleMania (playbutton) logo.

The closest thing I can think of to describe it is Disney World. It’s a singularly-themed merchandise, dining, reclining, celebrity meet-and-greet, entertainment mecca.

The convention center was split into two sections. First there was the superstore, open to the general public. If you’ve ever attended a WWE live show, you know they sell some 30 or so different t-shirts, worn by all of the top superstars, plus an assortment of replica titles, and a few other novelty items. Take that limited concept and multiply it by 100. Shirts were everywhere: If there was a wrestler under contract in any way with WWE (so no CM Punk, Jeff Hardy, etc) you can bet there was a shirt on sale. A huge assortment of replica titles to be bought, action figures, stuffed wrestlers (like smaller versions of the old “Wrestling Buddies”), commemorative cups, memorabilia. It was breathtaking to behold the first time I walked in. 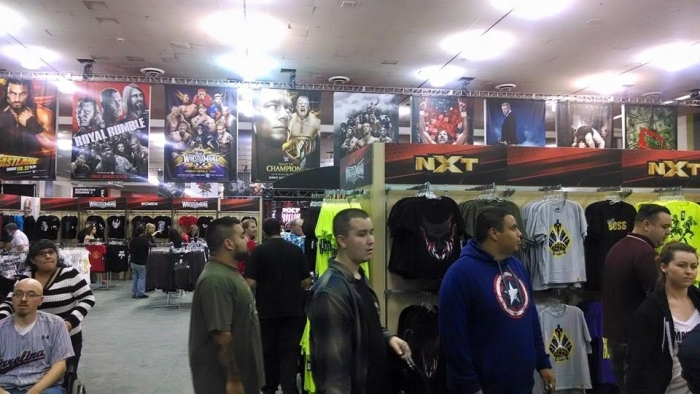 So much stuff to buy, it was mind-boggling

Having said that, there were limitations and criticisms. As far as I could tell if you wanted a Daniel Bryan shirt, you could get one, but only one. Sure you could buy as many as you wanted, but they only had one design on sale. Finn Balor had a shirt for sale (the black face paint shirt with his face partially visible), but if you wanted his original debut shirt (the solid black with the red and white teeth), you were out of luck. NXT was represented with shirts for sale, but only one style for each superstar. And so on. A few guys like Hogan, Cena, Austin, etc, had multiple shirts, but not many.

Also I was amazed at how many people were buying replica championships. Granted, these aren’t the plastic toys you can buy at your local shopping center. These are the lifesize metal belts that look, for the most part, exactly like the kind used by the company. The big difference was the strap: WWE uses genuine leather, but the replica uses a cheap imitation. I have a replica Big Gold belt that I had to send off for a few months to get releathered. Buying a WWE replica title at the superstore will set you back a whopping $425. And I saw folks buying one for each shoulder.

But if all you want is a t-shirt of your favorite current performer or WWE-sanctioned legend of the past, you are almost guaranteed to find something worth buying. I came to San Jose with a Finn Balor shirt, a Kevin Owens shirt, a Macho Man shirt, plus a few custom shirts. I had more than enough to keep me dressed appropriately for the week, but I was still compelled to buy another shirt at the store (a yellow Mega Powers shirt)…and then another one for my wife (a John Cena one)…and two more for my kids (more Cena, because of course my six and eight year-olds love John Cena). 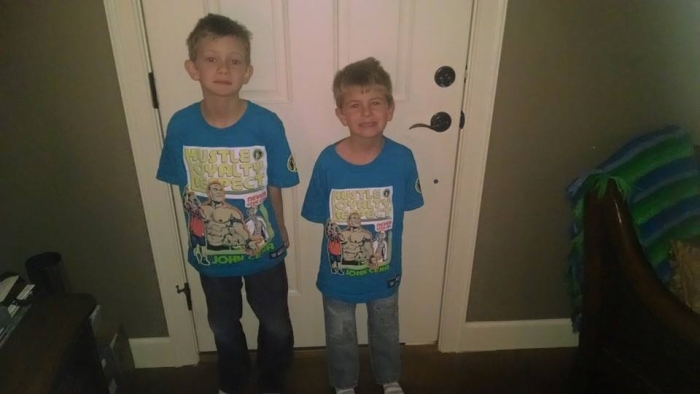 In the back of the store was a small entry way to another part of the Convention Center, blocked by security. Beyond that doorway was the real highlight of each “day” during WrestleMania week: Axxess. 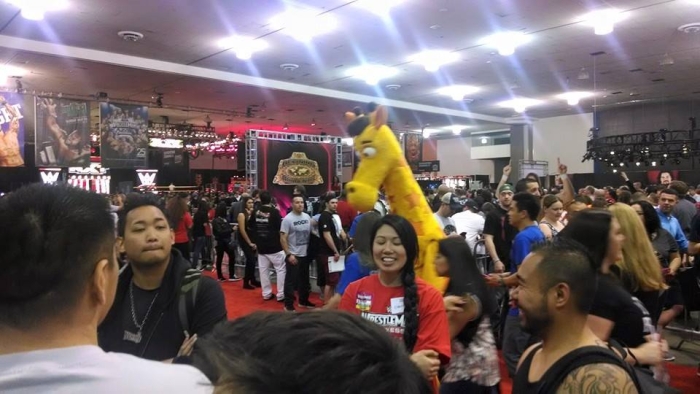 It is touted as the ultimate fan experience for all those who love WWE. It is promoted as a combination of meets-and-greets, tours through WWE’s past and celebration of WWE’s present. It is billed as your best opportunity to take a picture and shake hands with your favorite superstar. 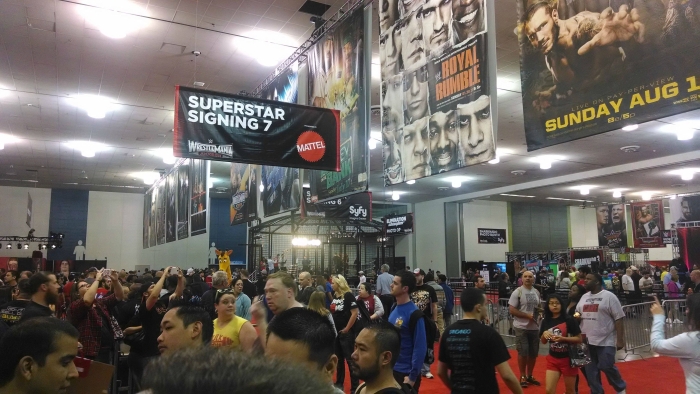 It looks like people are moving, but no: they’re just all standing 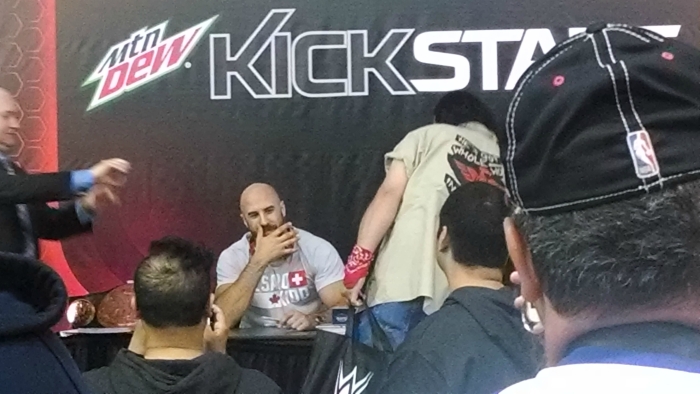 It is standing in line for literally an hour and a half just to shake Cesaro’s hand and get a picture with him and Tyson Kidd, only to be 10 people back in line when their shift is up and they are replaced by tired, out-of-it Wild Samoans. It is standing in line to have a picture taken with Sami Zayn only to find out once you get their that there will be no more pictures because it’s taking too much time, so the most you can do is have him sign your hat. 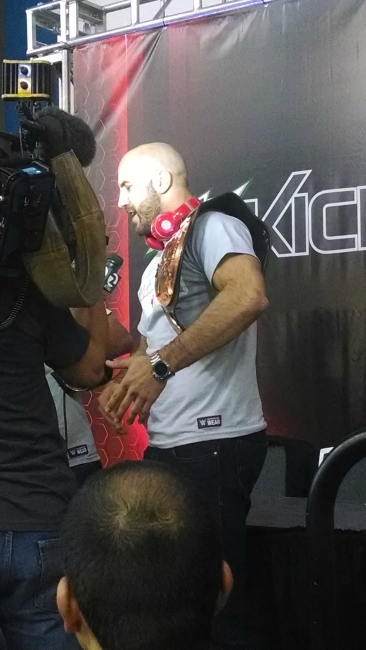 so close, yet so far 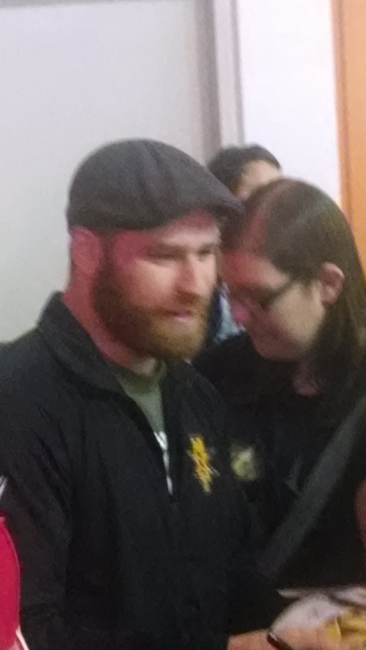 The face of NXT. He and Charlotte stayed 30 minutes past their time just to meet the last of the fans. Great people; very kind and courteous 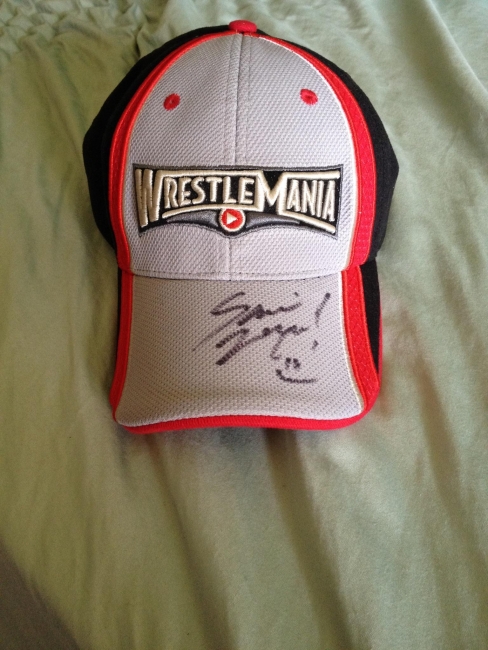 It is also standing around the NXT ring at the conclusion of a CJ Parker nothing-match (which I totally should have paid more attention since…nice knowing ya CJ) and then being surprised to hear Bray Wyatt’s music playing and then out comes the Eater of Worlds to answer fan questions.

It’s standing in that Sami Zayn line, just knowing you’re going end up disappointed because he’ll probably be replaced by freaking Mojo Rawley before you get there, when who should appear but ENZO AND BIG CASS, out to wrestle right next to you; and suddenly, while you’re screaming along with his “My name is…” spiel, you don’t mind all the standing in line. 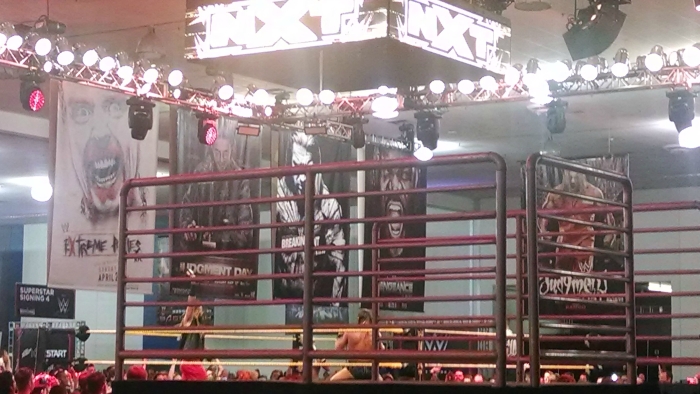 These guys were over everywhere they appeared, and even in places they didn’t. Enzo and Cass are going to make gobs of money on the main roster one day

It’s walking around the tribute to Macho Man’s wardrobe, and having the stupidest grin on your face when you realize just how big Andre the Giant really was. 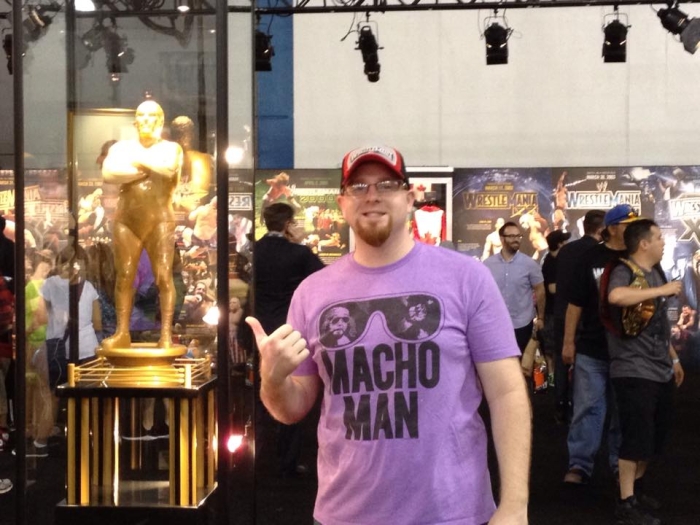 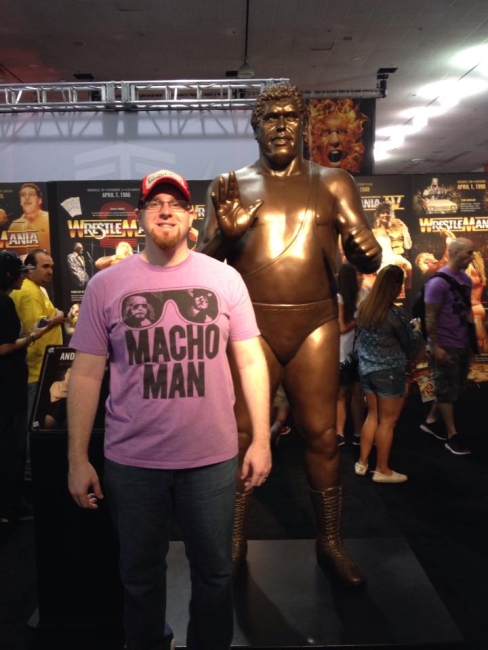 Andre’s statue was on a platform, but I was standing on my toes to make up the difference

It’s being in the aforementioned line and hearing about some loon who jumped onto the Elimination Chamber and decided to climb that sucker like Spider-Man trying to escape from Bonesaw.

Yes it’s a lot of standing, yes there is disappointment that comes with just missing your favorites, but there’s also Hideo Itami vs Finn Balor happening right there mere feet away from you. There’s seeing Dolph Ziggler walking down a hallway, flanked by security guards, but still stopping to meet and greet with a little kid. And there’s an indescribable excitement that happens when you stop and look around and realize you are among fellow wrestling nerds and no one is going to make fun of you for posing like Owen Hart with a Slammy award.

If the WrestleMania host city is the mobile capital of WWE’s fandom, Axxess is the Town Square. It’s the place where everyone congregates, passes through and says hello. It’s reason enough for me to say:

Enough is enough and it’s time for a change! 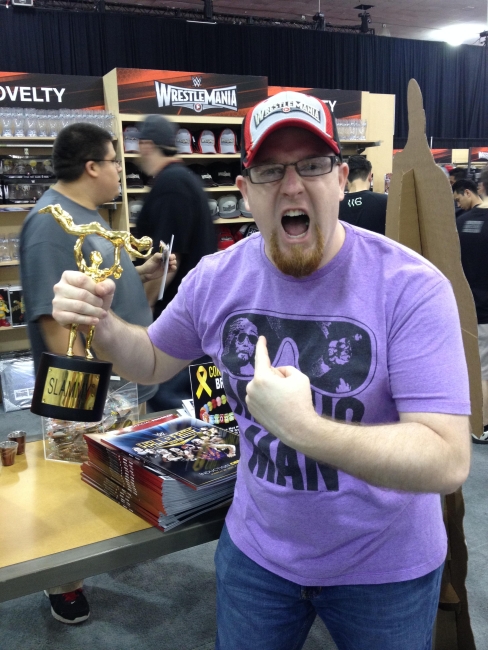 See page #2 for my NXT experience…