Chris Jericho – A Lion’s Tale: Around the World in Spandex Book Review

Wrestlers like Lita, William Regal and (for reasons I’ve never understood) Mick Foley have set a bar of excellence with their autobiographies. Unfortunately you also have wrestlers like Hulk Hogan who have set a bar of mediocrity in wrestling autobiographies. So for the benefit of Wrestling 101’s undernourished book section and because I actually want to talk about this book, I decided to take a crack at reviewing Chris Jericho’s opus, ‘A Lion’s Tale: Around the World in Spandex. Chris Jericho is one of the few top Superstars who doesn’t have a wrestling DVD release, be it documentary or match collection. This meant I knew little about his personal life going into the book so everything that I would read about in this book would be new to me, which is a nice change from wrestlers whose personal life is plastered all over the public domain. 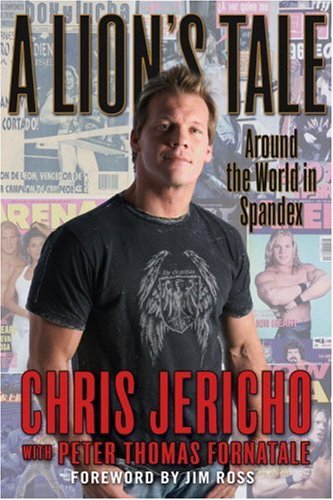 ‘A Lion’s Tale’ covers about 22 years of Jericho’s life. He starts from his first memory of watching wrestling at age seven to his WWE debut at age 29. That’s it.  Now in my ‘Exist 2 Inspire’ review for the Hardy’s autobiography I made the point that writing an autobiography at age 30 makes no sense because you’ve barely lived your life. In my experience, when written at such a young age the autobiography normally ends up criminally short and lacking in any depth. Being one of the best wrestlers in the WWE today, it’s almost fitting that it was Chris Jericho who managed to show me this opinion could be wrong.

Having this book only encompass his journey to the WWE fits with the whole idea of chasing a dream which the autobiography seems to be about. I’ve heard that Jericho is writing a sequel (tentatively titled ‘Undisputed Attitude’) and if it’s anything like ‘A Lion’s Tale’ then we benefit from having two books to read as opposed to one monolithic opus. I just hope after he releases the next one, Jericho doesn’t go the Mick Foley route when writing autobiographies and write one to cover a two year period every few years.

I actually had to think about whether I’d classify ‘A Lions Tale’ as a clear cut autobiography. Obviously that’s what it is but Jericho goes off on so many tangents, normally about popular culture or observations about the countries he’s lived in, that it encompasses so much more information than a normal autobiography. Chris Jericho achieves this by not shutting up. Seriously, he talks about everything that happened to him throughout his life while travelling. At one point he spends half a page talking about a problem with his chicken at a KFC. Regardless of how good the book is I thought I was reading a wrestling autobiography not a restaurant review. Yet despite the length in conjunction with the time frame it’s incredibly well balanced – by not leaving anything out he gives everything equal attention and he uses it to show his development as a wrestler. Despite oddities such as talking about fried chicken the book flows seamlessly together, and is quite easy to read.

One of the reasons for this success is that Jericho manages one thing that autobiographies tend to mess up and that’s chronology. In a number of autobiographies sticking to chronology is taken as more of a vague suggestion and to me it breaks the flow of the writing when you have to jump back in time throughout the procession.

He talks about his successful encounters with women (and I can’t help but think he wants us to know he’s been with a lot of women) like a nebbish teenager. Conversely he’s not above mentioning when his libido has gotten him into trouble, which is humorously often.

Jericho also handled his interest in wrestling differently than most wrestling fans turned wrestlers of this era. Instead of simply admiring them, Jericho out right stalked wrestlers when he was younger. This didn’t stop when he entered the wrestling scene – he becomes enamoured with Owen Hart, Chris Benoit and Eddie Guerrero before even meeting them and they remain at the forefront of his mind throughout his travels.

Speaking of Chris Benoit, the smartest thing Jericho did was not use the WWE to publish this book. What with the WWE blacklisting Benoit the book would’ve felt incomplete, much like the last Eddie Guerrero DVD release was due to Benoit’s exclusion. Jericho wrote the book while Benoit was still alive so the image of Benoit isn’t tainted by sadness or anger. In fact outside of the forward, I believe Jericho only references the tragedy at one point when talking about a picture of Nancy and Chris. Actually because of the WWE’s new PG policy, half of this book might have been censored given its content, which would’ve ruined the book.

I very much doubt we’ll ever see another story like Chris Jericho. He’s travelled the world all in pursuit of his lifelong dream of working for the WWE. Wherever he went he managed to somehow engross himself in the politics of the business, yet he offers an interesting position. He was never a top man at any of these companies but he was still on friendly terms with the bigwigs at the companies he worked for and always experienced the problems that these bigwigs were famous for. One example is his time in ECW where he experienced firsthand Paul Heymans cheap nature which was part of his inability to handle money which contributed to the downfall of ECW.  Heyman booked a plane ticket for Jericho on a bereavement fair and then proceeded to commit medical fraud by writing a fake doctor’s note if Jericho was questioned about the ticket.  By not being the top man he was neither entrenched completely in the politics nor oblivious to everything.

His babbling and extracurricular exploits should not deter you from this book. His quirky personality only heightens how enjoyable this book is. This is almost certainly the best wrestling autobiography I’ve read, and I don’t give that accolade lightly. I’ve read this book several times and it’s not any less enjoyable. I don’t see a lot of non-wrestling fans picking up this one, but for anyone who enjoys wrestling or Jericho this is a must-read.