AEW Double or Nothing: One year later

One year ago, AEW’s Double or Nothing kicked off a brand new pro wrestling venture. Six months before that, Cody Rhodes and the Young Bucks organized the All-In PPV event, the largest non-WWE PPV show since the collapse of WCW, and the biggest “independent show” in North American wrestling history. 12,000 people sold out the Sears Centre in Chicago and witnessed Cody Rhodes win the NWA World Heavyweight Championship. Back then, fans could only dream of a pro wrestling competitor to WWE, after Ring of Honor and TNA/Impact failed to rise to the occasion. Many would have been happy to see New Japan score a North American TV deal, and in fact, NJPW was working toward that very goal when some of the biggest American names they had decided to beat them to the punch.

Double or Nothing 2019 was the first PPV for All Elite Pro Wrestling, the brainchild of the aforementioned Cody and Bucks, with the financial backing of the Khan family (owners of the Jacksonville Jaguars, among other franchises). Skeptics were quick to dismiss the whole enterprise as a vanity project that would never see reach maturity, but then Kenny Omega signed and everyone’s eyebrows raised. Then Chris Jericho signed. Then Jon Moxley signed…

Double or Nothing 2019 aired with nothing but goodwill from fans and would-be fans alike. By the time the event was over, a new champion was crowned, a TV deal was secured, and the company was off to the races. Come September, Dynamite was on TNT, and new PPV events were coming every few months. When 2020 hit, the show was trending upward and was poised for a huge ratings year.

Then COVID-19 happened and the world shut down.

AEW has aired amidst a wrestling world turned upside down. WrestleMania was held without a live audience, as have all the weekly shows. AEW saw much of their roster return to their home countries, unable to work due to flight restrictions and quarantines, making for a very short-handed Dynamite every week. Still, the company pressed on, and hosted Double or Nothing 2020 under depressed circumstances. I thought it’d be prudent to look back on last year’s show vs this one, to see what was needed then and decide if the company has improved on things over the course of a year…

Last year I wrote this

REVIEW: AEW Double or Nothing 2019

A watermark in the corner

That’s a minor note, I know, but it was one that spoke to a larger problem: Identity. AEW needed a way to stand out. TNA had the stupid six-sided ring. ROH had the handshake system. New companies need something to distinguish it, more than just a watermark, though that’s a given. If you hadn’t noticed, yes there’s a watermark now and it’s fine.

In terms of its identity, I think that’s still TBA.

There is, however a sense of competence in everything that’s happening (which TNA has struggled to have for its entire existence), as well as high production quality that speaks to a company that has the money to look like a big player (which ROH has never had). What really sets AEW apart from WWE, though? They talk about a ranking system, and having more of a sports feel to deciding who is next in line for titles, but that’s mostly just talk.

They talk about not having authority figures on-screen and for the most part that’s true (I’ve seen Tony Khan a few times though, even once refusing to sanction a Moxley match), but what’s the point? I get that authority figures are played out and boring, but if you’re going to go out of your way to say you don’t have them, what are you going to have? I feel like the ranking system was supposed to be a substitute for that but if so it hasn’t materialized.  The show still lacks an identity beyond just “a more competent WWE.” That’s a good start but it’ll only get you so far.

Here’s what I said last year:

The real problem came with communication between the production truck and the commentators. More than a few times they seemed to have lost the script and didn’t know what was coming next. JR even had to say at one point “I’m not sure what we’ve got going on next…” and you could hear the others in the booth sometimes stop talking midway through and switch gears. There was a great reduction in plugs for future events and other things during the matches, but they did happen and they needed to be shortened and more-quickly delivered.

I had almost forgotten how amateur hour the commentary was last year. Things have improved ten-fold now, and the fact that they’re on weekly is a big reason why. They’ve worked out almost all the kinks. Remember when everyone complained about the audio? It’s no problem anymore, either. This is one area where they’ve improved the fastest, to the point of surpassing WWE in a lot of ways.

WWE has relied on doing the same thing the same way for twenty-five years. They have a “paint by numbers” production that works fine enough when everything is as it should be. When there’s a pandemic, however, and the crowd is gone, WWE doesn’t know what to do.

AEW, meanwhile, had the virtue of being too new to know what not to do. They changed the hard camera placement, ran more gimmick-segments, put wrestlers in the stands, used guest commentators, etc. They seemed to embrace the change as an opportunity to experiment, whereas NXT/WWE saw it as a burden to endure. Vince has made changes slowly, but AEW was born out of a desire to make changes.

One year later, that has given them the advantage.

The Stadium Stampede match was the most insane, hilarious, shocking, fun wrestling match of the year. I might’ve liked WWE’s Firefly Funhouse match more for the story it told, but AEW won the day with the overall fun-factor, and because they have embraced the need to shake things up.

A year ago AEW had a small but talented roster of main-event talent and cartoon gimmicks. There was very little middle ground. They needed more players to fill out their midcard, more guys who weren’t ready for the top title but could easily be seen blossoming into that role. A year later, they’ve made great strides rectifying that issue. Guys like Brian Cage, Lance Archer, Brodie Lee, Matt Hardy have all come in with great buzz, to go along with homegrown talents like Darby Allin, Sammy Guevara, and Britt Baker, who have blossomed into something special over the past year. 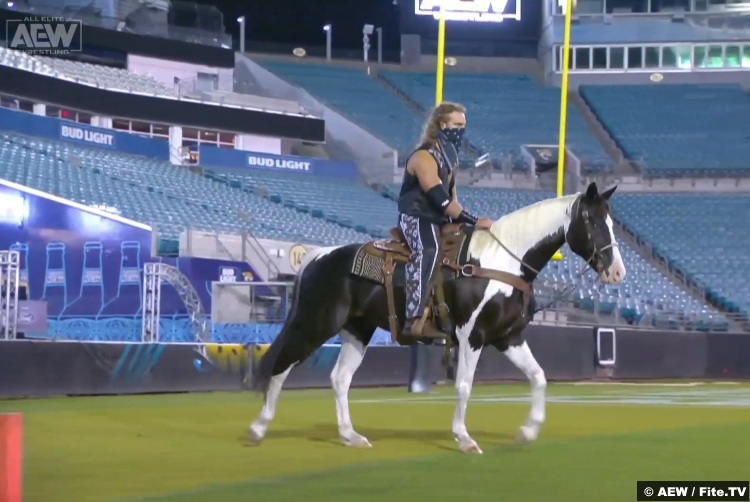 The real success story is Hangman Adam Page, who is big now, but would be even bigger had the pandemic not hit. I absolutely believe he is going to be their biggest superstar. He was connecting with crowds in ways that could not be denied, with a natural blend of comedy and toughness.

A year ago AEW needed depth. They probably still do, but now they have more than enough to keep the show fresh and the crowds (hypothetical or otherwise) entertained.

AEW has come a long way in a year, with many of their improvements happening so subtly and smoothly, most might’ve missed them entirely. The company has proven itself capable of handling the initial pop of interest and inevitable leveling off of ratings, and they’ve navigated through the pandemic better than their older, more experienced competitors. Without COVID-19, there’s no telling how high the company would be right now.

Hopefully the crisis will be over soon, and maybe we’ll look back on this year after Double or Nothing 2021 and laugh at just how far the brand has come, once again.