The Outsider S01E01-02 Review: Fish in a Barrel / Roanoke – The weirdness has only just begun!

When we talk about killers–real predators, the kind that could easily turn serial–some exist on the fringes of society. I’m talking about people like Henry Lee Lucas, Ottis Toole, or Ángel Reséndiz. They’re scary, obviously, but when they get arrested, no one’s surprised. No one’s like, “But he seemed so level-headed.” Or the classic lines that have become cliché: “He was always so quiet.” Or “He kept to himself.” The kind of killer those lines describe is much scarier. He lives in our neighborhoods. He may have even had dinner with you, driven your kids home, or slept in your bed. You know him. But you don’t. 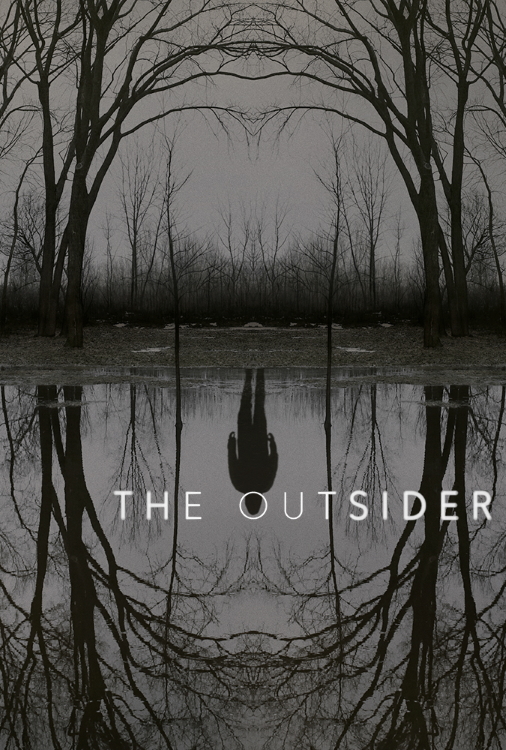 That what’s seems to be going on as we begin the premiere episode of HBO’s The Outsider, based on the Stephen King book.  In the small town of Cherokee City, Georgia, a little boy has gone missing. He’s not missing for very long, though, as his mangled body is found a short time later in a wooded area. This is not a run-of-the-mill crime, especially for a community this small. The boy has been savaged, his body bearing bite marks. “Animals?” Detective Ralph Anderson (Ben Mendelsohn) asks. The simple “No” he gets in response is a self-contained tragedy.

At first, it seems as if the story is textbook. Anderson has 3 witnesses who saw a local man, Terry Maitland (Jason Bateman), either in the vicinity of the crime scene, talking to the victim, or afterwards, covered in blood. Terry Maitland is an upstanding citizen–a teacher, a Little League coach–but this is a crime that cannot go unpunished. Anderson decides, perhaps out of hubris or in a show of decisive action for the town, to arrest Maitland in public. 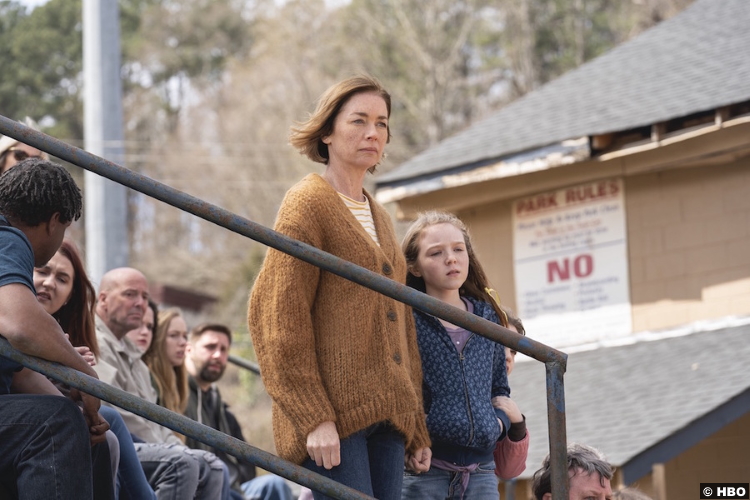 Specifically, he has him arrested during a Little League game that the entire town seems to be attending. His wife, Glory (Julianne Nicholson) and daughter Jessa (Scarlett Blum) look on in horror. From the beginning, Terry denies that he had anything to do with little Frankie’s murder. But the case just seems so darn compelling.

There are the witnesses, of course. And the DNA evidence. And the fingerprints. There’s just one small issue with everything. On the day of the murder, Terry was out of town at a work conference. Still, he could have sneaked back into town, committed the murder, and returned to his colleagues, right? I mean, people committing their first murders often go to a literary conference out of town, duck their coworkers, return to town, drive a vehicle they’ve never been seen in, pick up a boy they know, kill him in a manner so heinous it defies comprehension, and then resume their attendance at the conference, their colleagues none the wiser. 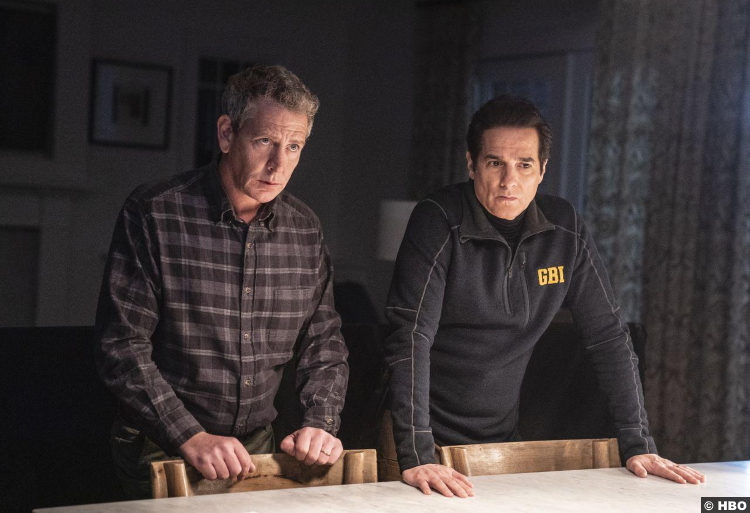 So, yeah. None of it makes any sense. In addition to the witnesses who saw him either before or directly after the crime, they’ve also got a taxi driver who picked him up in town. He reminded her to make sure she logged his ride. He makes eye contact with surveillance cameras. It would seem to be the most obvious crime in the world, except for another teensy weensy fact. At the time the murder was committed, Terry was at the conference.

They know this, because he’s on camera at the conference, asking a question at a panel. So somehow he’s in two places at once. How can this be? Anderson, to his credit, is trying to close the case, but not by any means necessary. He wants explainable information. So he starts picking things apart. One of the first stops is that van that Terry was allegedly driving.

But pulling that thread just leads to further questions. The van was actually stolen by a kid making his way down from New York. When Anderson and his GBI colleague Yunis Sablo (Yul Vazquez) question the kid, they find out he left the van in Dayton, Ohio, around Ash Wednesday. The Maitlands were in Dayton at that time. But they flew there and back. So what does it all mean? 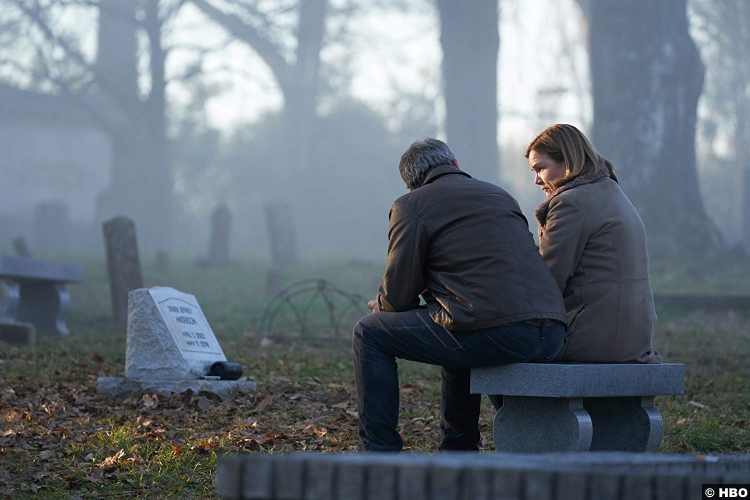 Anderson, who with his wife Jeannie (Mare Winningham), is still grieving the loss of his own son to cancer, can’t figure it out. Every time he thinks he has a handle on this case, it squirms out of reach. And then it gets worse.

It’s no secret the Petersons, Frankie’s family, have been suffering. Not only was Frankie taken horrifically, but also mom Joy (Claire Bronson) has also died. The circumstances of her death are unclear, but it’s almost like grief just shut down all her systems.

So when a gunman appears as Terry’s been escorted to a court appearance, it’s no surprise when it turns out to be Ollie Peterson (Joshua Whichard), Frankie’s older brother. He’s shot dead by Ralph, but not before he injures several police officers and fatally wounds Terry.

So now Ralph has nothing. He’s got a lot of evidence that adds up to less than it appears and a dead suspect. But something unsettling is afoot and maybe it has something to do with that mysterious hooded person who keeps showing up around town. Or the man Jessa keeps seeing, the one who maybe left wet footprints in her room. Or maybe it’s something else entirely. But we’ll find out.

8/10 – While Stephen King adaptations can be very hit or miss–and I know, because I’ve reviewed them all, at least on TV–I think we have a winner with this one. These first two episodes are a bit slow-moving and very bleak, but the weirdness has only just begun.