When I read about Reprisal, the Hulu original, I was interested immediately. First of all, it stars Abigail Spencer, whom I love from Rectify, Timeless, and when I watched the Duke and Duchess of Sussex get hitched.* Second of all, the story–REVENGE!!!–was intriguing. Then I watched the show.

And I have to confess, it took me a little while to finish reviewing it. Actually, it only took me a while to watch the final episode. The first 9 episodes, I swallowed whole. But by the last episode, I didn’t want it to end. 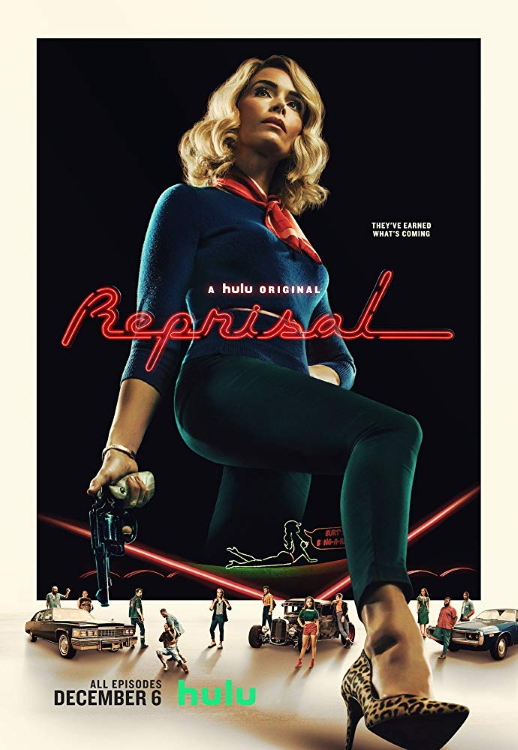 Spencer stars as Doris Quinn, née Katherine Harlow. When she was a younger gal, living somewhere down South, she was set up by her brother Burt (Rory Cochrane). Burt, the leader of a gang called the Banished Brawlers, and his right-hand men, staged a kind of false flag operation in which they killed some of their own guys. They blamed it on their rival gang, the Happiness Ghouls, who only got that close, the story goes, because Katherine was helping them. As punishment, Katherine is dragged behind a car and left for dead. 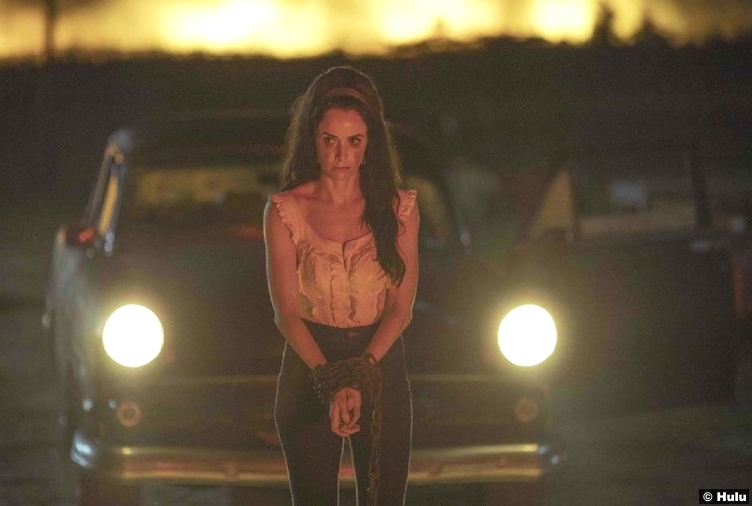 Having reinvented herself as Doris, she leads a comfortable life as a chef and the wife of semi-legitimate Detroit restaurant owner Tommy Quinn (Ray McKinnon). Tommy is terminally ill, though, and when he passes, Doris puts phase 2 of her revenge plan into action. I say “2” because she’s already begun her plan, having embedded Ethan (Mena Massoud) inside the gang.

Ethan, along with Matty (Rhys Wakefield) and Johnson (David Dastmalchian), are the Three-River Phoenixes, low-level Brawlers who work as bagmen for the gang. They travel around, collecting proceeds from Brawler-indebted businesses that include each Bang-a-Rang, which are large-scale burlesque clubs. 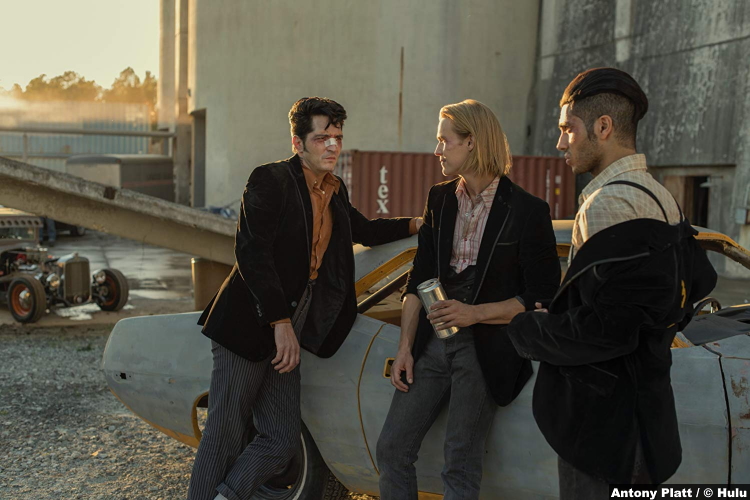 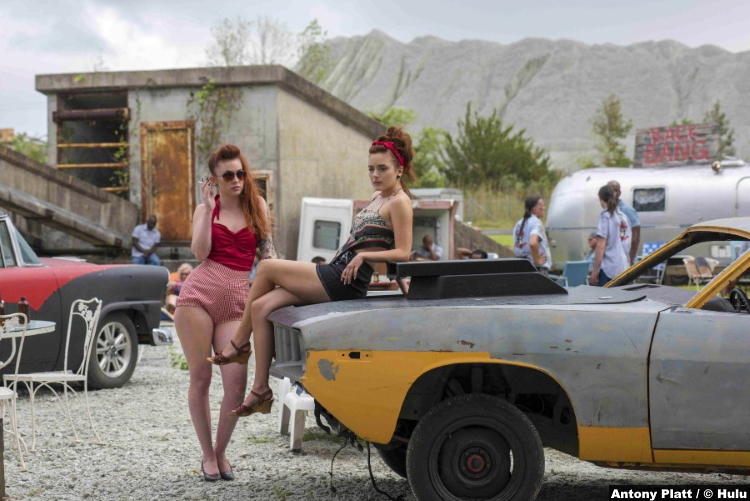 The rest of the Brawlers, and the ladies who work at their flagship Bang-a-Rang, live in a compound around said Bang. (All except Burt, who’s in a self-imposed exile for most of the season.) They’re territorial and suspicious–they are gang members, after all. For Katherine to have a chance at even getting close to them, she’s going to have to plan carefully. And she’s going to have to have some help.

After a few false starts, Doris finds kindred souls in the Monster Ring, a duo of stick-up men who’ve created trouble for criminal gangs all over metro Detroit. There used to be more members of the Ring–hence the name–and like Doris, the men, Earl (Craig Tate) and Cordell (Wavyy Jonez), are haunted by their pasts. Not only by what happened in the here and now-ish, but also what happened during their service. Both men are veterans of the Archipelago war, including the terrible fighting on the 37th Island. I’m sure you remember it from school. 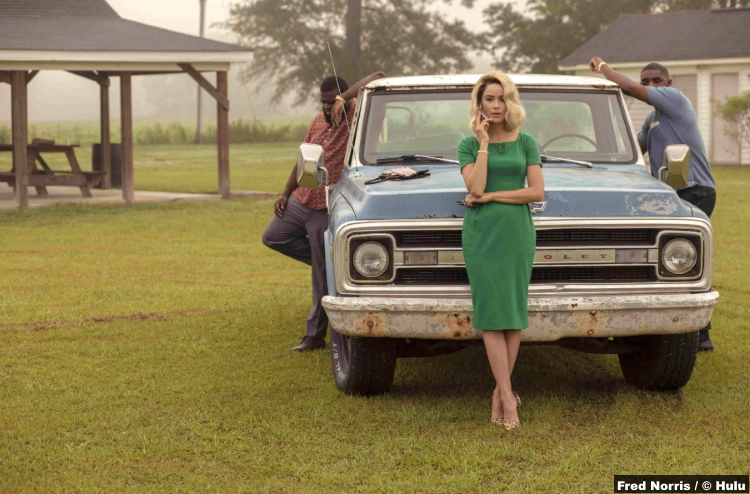 Oh, you don’t? That’s because it’s one of Reprisal‘s greatest tricks. It’s not taking place in our world. It looks a lot like our world, but it’s an alternate history version. And you’re never quite sure what time we’re upon. Everyone drives a vintage car and dresses like they’re late for a rockabilly convention, but they also have cell phones.

This results in a dreamy quality, which is only enhanced by the little background details you might miss if you’re not paying attention. Doris’s crew, for instance, stays at a motel called Donuts & Duvets. Other scenes take place at establishments called things like Slimmy Hank’s Egg Pit and Another Gas Station. So when Brawler Joel (Rodrigo Santoro) listens to his daughter Lyla (Scarlet Blum) tell another installment of the saga she’s crafting, about a man called Harold Horpus, you don’t even question it when she includes a “night-time giraffe.”

Santoro as Joel has one of the best sequences of the season, by the way. It’s a fight scene, beginning with one long take that’s reminiscent of the famous 6-minute tracking shot from True Detective season 1. That scene is a perfect example of how ambitious Reprisal is. There is plenty of style to go around, from the set dressing to the costumes to the filming choices. When someone tells a story of the past, for example, it’s accompanied by a flickering film of that memory or sometimes news clips. There’s even a fourth-wall-breaking scene, although it’s less successful than some of their other stylistic flourishes.

If there is a polarizing aspect of the show, it’s exactly that. When you really examine it, the story ends up being kind of thin. But you might not think about it, because it’s surrounded by such dazzling distractions and such a fully-realized world. Whether you consider that a deal-breaker is a personal decision. But as for me, I’d like to see the story continue.

8/10 – While the show is a little light on substance compared to style, ultimately I was seduced by its charms. It immerses in such a strange but intriguing world and I kind of want to live there. But without all the violence (probably).

*Me, watching the guests arrive: Dang, that looks like Abigail Spencer.