From Lifetime, the network known more for its hysterical films than its original television programming (although Unreal was good the first season), comes You. Based on the book(s) by Caroline Kepnes, You is about bookstore employee Joe and the lengths he’ll go to make a woman fall in love with him. I know it sounds like standard fare from the network that brought you Stalked By My Neighbor, but is it something more? 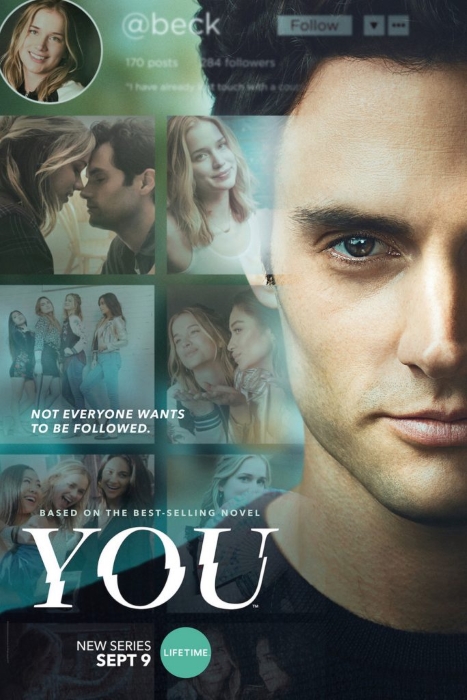 Played by Penn Badgley–yes, Lonely Boy himself–Joe seems like a fairly regular guy at first, if a little intense. One day at Mooney’s, the bookstore he manages, he meets customer Guinevere Beck (Elizabeth Lail). She’s known as “Beck” to her friends and Joe’s planning to become at least a friend.

To that end, he does some research on her. I’m being purposely mild in my description here, because where some of us might consult Dr. Google after meeting someone new, Joe does a much deeper dive than that. Sure, he checks out her social media, but he also follows her. He finds her apartment and stands out on the sidewalk. He masturbates on the sidewalk outside her apartment. On another day, he finagles his way into her apartment. There, he goes through her computer and reads everything. 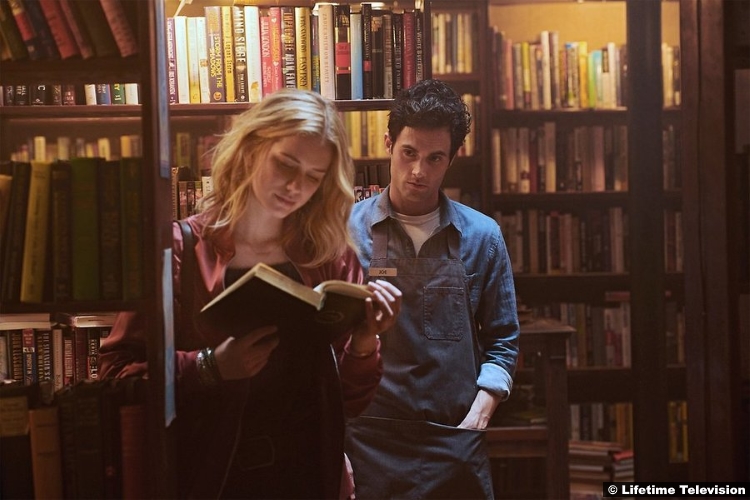 So let’s make it clear. Joe is a creep. A capital C Creep, even. And it’s not like Beck doesn’t have enough creeps in her life. She’s dating one, in fact. Her somewhat boyfriend is Benji (Lou Taylor Pucci), a failing-upward rich kid whose latest endeavor is an artisanal soda company. Their latest flavor is cumin!

When Beck is not trying desperately to get Benji’s attention, she’s working at a yoga studio, working for her MFA, working as a TA, and trying to write. That isn’t to say, though, that all she does is work. She does have friends–rich friends, in fact, who don’t have to work like her. They include Peach, played by one Pretty Little Liar, Shay Mitchell. Yes, I’m just as psyched as y’all are. 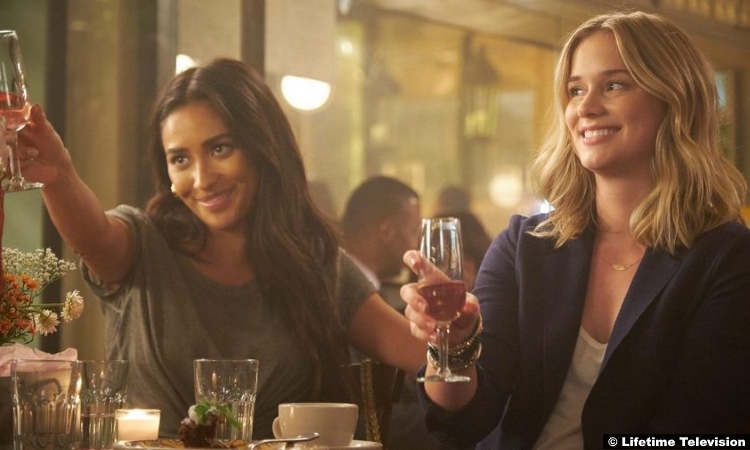 When Joe’s not working or literally stalking Beck, he has a sweet friendship with his neighbor Paco (Luca Padovan). Paco’s mom and her boyfriend fight and make up loudly, so Paco spends a lot of time sitting outside their apartment. Joe gives Paco food and lends him books. Some people might not buy that a boy Paco’s age would want to read the kinds of books Joe lends him–The Three Musketeers, Don Quixote, etc.–but hey, some kids are different.

Since Paco’s mom and Ron (Daniel Cosgrove) are busy making up, Joe takes Paco to the bookstore to retrieve that copy of Don Quixote. It, like other old books, is kept in a temperature-controlled locked cage inside the basement. Great, just what a stalker needs, especially since it’s been established that the bookstore owner is too old to visit much. 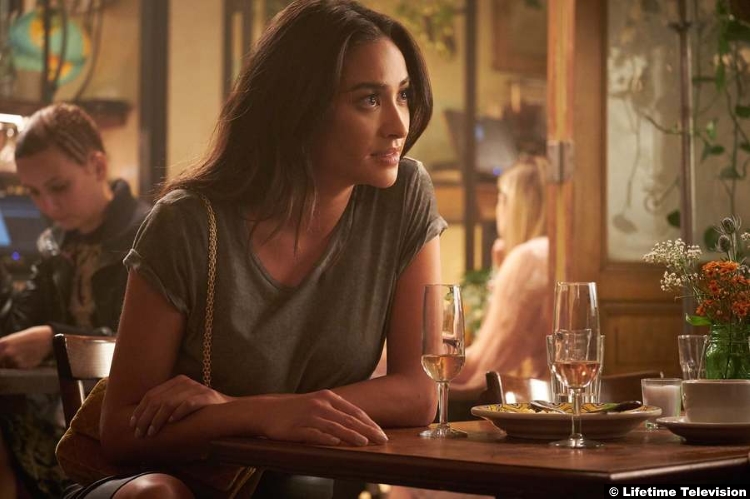 Now back to stalking Beck. She’s managed to corral her friends into going to an open night at a club. Beck reads one of her poems and it’s excruciating. The poem isn’t that bad, but her delivery is. She’s nervous and she’s reading off her phone and losing her place. She gets heckled by a man in the audience and even Joe–who’s followed her there–can’t watch.

He leaves, actually. He’s waiting on a subway platform when a drunken Beck comes down the stairs. She’s upset about the poetry reading and Benji not showing and she’s too close to the edge of the platform. So it’s no surprise when she topples off. Joe then has the perfect opportunity to be her knight in shining armor. It would be a textbook meet-cute (again) if Benji didn’t finally show up.

And then the real Joe, the person he is at his core, shows up. Luring Benji under the pretense of an interview with New York magazine, Joe instead knocks him out and puts him in the cage.

8/10 – Despite being on a network well-known for the lurid side of things–I literally made up a title of a Lifetime movie for this review and turned out to be one word off an actual title–You is a cut above. Part of that has to do with the source material and part of it has to do with the team behind the show, including the cast. They keep on track what could easily go off the rails. It’s strange that Lifetime waited until September to premiere this because it’s the perfect summer show–a little scandalous, a little bonkers. It’s popcorn television. It won’t change your life, probably, but it might get you to change your passwords.