Your SO OF COURSE preview of WWE Survivor Series 2019!

Raise your hand if you’re still watching Raw and/or Smackdown as devoutly as you are AEW and/or NXT.

Nevertheless, the show must go on. And by “show” I mean this article-series, and by “go on” I mean drag itself through yet another preview of yet another WWE PPV, the outcomes on which won’t matter five minutes after they happen, and which nothing of long-term consequence will occur because it’s not happening between New Years and Easter.

Yeah, me neither, but still THIS is your SO OF COURSE preview of WWE SURVIV’ is the best this company can hope to do in the face of rising competition and stagnant (at best) ratings, where even the best show the company has to offer has lost every head-to-head ratings matchup (this week being the exception!) against a start-up company that didn’t even exist a year ago and is run by an indie tag team, a midcarder, and a billionaire mark 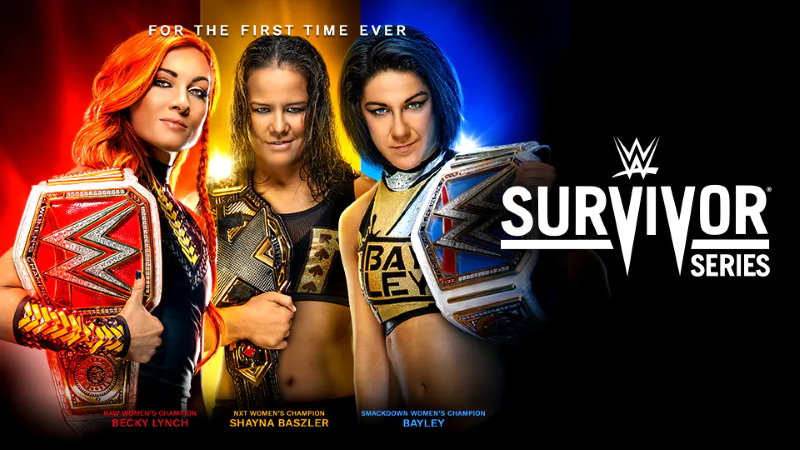 As is custom, Survivor Series is all about brand vs brand (vs brand), which means the month of November has been built around one show “invading” the other. That really failed to hit home this year* since up until last month, the two big brands were inter-mingling pretty regularly anyway. But since WWE exists in this weird Orwellian universe where nothing that ever happened before is remembered after five minutes, the three shows all act like the invasion is on the level of Taz and Mikey Whipwreck showing up on Raw in 1997.

Anyway, here’s a rundown of the matches expected for the main-card, including all the ways I expect Vince McMahon to screw it up!

(* to be fair, NXT has been great all month long, but that’s more because NXT is great, and not the company’s theme of the month).

What it is: It’s The Viking Raiders vs New Day vs Undisputed Era, a triple threat match with nothing on the line except BRAND SUPREMACY!!

What it is: Team Raw has Charlotte, Asuka and Kari Sane, and…uh… Team Smackdown has Sasha. I don’t even know who team NXT has. Raw has the edge on star power, though I’d trade them all for Sasha…which means she probably eats the pin.

What should happen: Sasha gets the win as the lone survivor; sort of a mini-rehabilitation after making such a grand return only to lose (again).

What it is: It’s Smackdown circa 2003, Brock Lesnar defends the WWE Championship vs Rey Mysterio in a match guaranteed to be three things: fast, painful, and obvious.

What should happen: A lot of calls for Rey to win and get a nice “gold watch” run with the top belt before he retires. The fact that we just passed the fourteenth anniversary of Eddie Guerrero’s death entered my mind as I thought about the finish. That seems cheap, though. Keeping it in the context of the stories to tell on the way to WrestleMania, it makes more sense for Brock to retain and hold the title till the big dance next Spring.

What it is: The three mid-card champions square off, with AJ Styles taking on Shinsuke Nakamura taking on Roderick Strong with nothing on the line except BRAND SUPREMACY!.

What should happen: Everyone should sit back and enjoy the fifteen minutes we’re given. Double-team spots, random combinations of 1-on-1 spots, high spots, chain spots, more more more! This is going to be bananas.  In the end, it feels like AJ’s match to win, which means Shinsuke should take it since “he needs it more” or something.

THE FIEND vs DANIEL BRYAN

What it is: Fiend finally won the belt after some classically bad booking in the lead-up. Who knows more about that than Daniel Bryan? Who better to be the new champ’s first big challenger.

What should happen: Fiend should be taken to the wire against a resilient, never say die Bryan, but in the end, the champ prevails.

What it is: Team Raw has more big names, with Rollins, McIntyre, Owens, Orton, and Ricochet making for an all-star lineup. Smackdown has Reigns, Ali, Strowman…Corbin? The artist formerly known as Chad Gable? I don’t even know who is on team NXT.

What should happen: Raw has the advantage, Smackdown needs a win, but I think NXT takes it on the strength of Matt Riddle (who I expect to be on the team) balling out and becoming even more of a superstar on his biggest stage yet.

What it is: It’s the hottest match on the card, bar none: Becky Lynch, Bayley, Shayna Bazler, toe to toe to toe with nothing on the line except BRAND SUPREMACY!

What should happen: Chaos. Chairs, tables, powerbombs outside of the ring, the whole nine yards. This match needs to be ugly, brutal, and painful. In the end, Shayna looks to MDK Becky only for Bayley to steal a pin. That’s the most sports-entertainmenty finish possible, but it feels right considering the strength of two of the women and the perceived weakness of the third.