Twenty five years ago, at the 1990 Survivor Series, the Gobbeldy Gooker made his long-awaited debut. But all anyone can talk about today is Undertaker this and Phenom that.

The early-to-mid 1990’s was the nadir of Vince’s love of silly gimmicks. You had the garbage man wrestler, the dentist wrestler, the Elvis impersonator wrestler, the Iraqi-sympathizer wrestler, and whatever the heck Ultimate Warrior was. It was a live-action cartoon show. It was the 1960’s Batman show; all it needed was “KAPOW!” to flash on the screen whenever Hogan hit a leg drop.

Somehow, in some inexplicable way, the Undertaker managed to be the one to outlast them all. There are several reasons why he survived and Isaac Yankem did not. People talk about the versatility of the character as though “undead mortician” is such a broad and interpretable persona. Really what people mean when they say “versatility” is “Mark Calaway and WWE writers changed the character up several times over the decades.” Whereas other gimmick-based wrestlers either became one-note novelty acts as the years went on (Honkey Tonk Man) or they were repackaged to a different character in the hopes of finding something that would work for the modern audience (Kane obviously has had more staying power than Yankem ever did). But Undertaker remained Undertaker. He remains Undertaker, with 25 years of tweaks along the way.

He started out as Ted DiBiase’s (another two-dimensional gimmick) secret weapon. As The Million Dollar Man went up against Dusty Rhodes’ “Dream Team” in a traditional four-on-four Survivor Series bout. Dusty’s team had the Hart Foundation and Koko B. Ware (don’t laugh, he’s a hall of famer…actually no, laugh because he’s a hall of famer), while Ted had Honkey Tonk Man and Greg Valentine. Undertaker was the big secret debut that had everyone buzzing. Roddy Piper, sitting in on commentary, made the now-famous call when he said “holy cow, look at the siiiiize of that ham hock.” Not exactly a bone-chilling description of his cartoonish undead powers, but a fitting summary of his legitimate size and stature. They used the “Andre camera” on him, using a low angle to make him look like a towering giant (as if being 6’10 wasn’t sufficient). 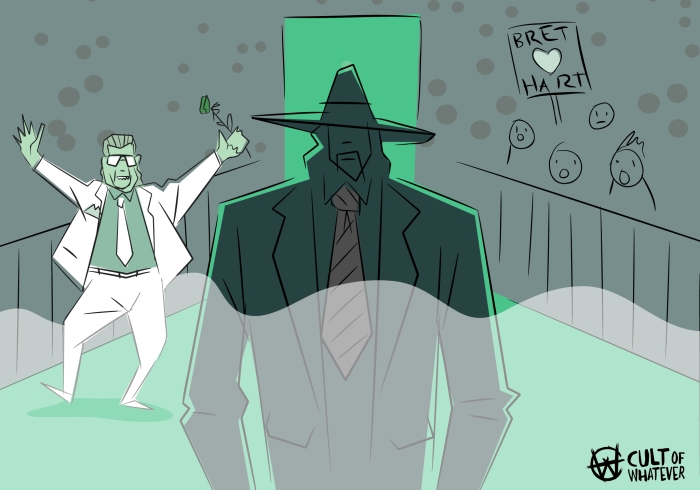 A few months later he found the (on-again, off-again) compliment to his silly character, the equally-silly Paul Bearer. Everything from his name to his appearance (with chalk-white skin and huge bags under his eyes) made him a perfect fit for the still-silly Undertaker. Soon after the paring, Taker won the first of twenty one straight WrestleMania matches, taking down Superfly Jimmy Snuka.

There wasn’t a hint among anyone that it would be the start of a streak, in fact the streak probably didn’t become a “thing” behind the scenes until he was six wins into it and about to take on Kane at WrestleMania 14. Even then it was only given a passing mention on air until Taker began referring to his opening decade with WWF as a “decade of destruction” in the run up to his match with Ric Flair at WrestleMania X8. And even then the streak still wasn’t anything more than a footnote until Randy Orton and his legendkiller gimmick came along to challenge “the streak” at WrestleMania 21. Back in 1991, however, Undertaker was just the hot young superstar in the middle of a typical big push given to hot young superstars. There was no John Cena available to hand him his first defeat.

Change the names and see if this isn’t familiar… Rusev makes his debut, wrecking shop and demolishing opponents big and small, until he runs up against the franchise that is John Cena. He surprisingly defeats Cena too (albeit with a little outside help). Before he has a moment to celebrate, however, he’s booked in a rematch where the hero gets his win back.

Now change Rusev to Undertaker, change Cena to Hogan and try not to remember Tuesday in Texas.

Undertaker recovered from his short feud with Hogan, largely because they didn’t job him out to the champ three straight times (eh hem) and instead moved him down the card to get his mojo back. He turned face soon after and entered the second phase of his career, as the good guy taking on giant heels. He wrestled Kamala, he wrestled King Kong Bundy, he wrestled Giant Gonzalez. He wrestled anyone that Vince could find that would give him a size or weight obstacle for the babyface to overcome.

Eventually he ran up against Yokozuna and finally a slightly smaller doppelganger, later dubbed “Underfaker.” His babyface run culminated in a WrestleMania 13 main event match and championship victory over Sid, and the next year he took on his greatest “big man” challenge, his long-lost brother Kane. Through it all, despite all the silly cartoon characters he went up against, the Undertaker himself never descended too far into camp. It was the utter earnestness of the character the kept him from going over the edge. While he feuded with jobbers he always carried himself like a star, and the commentary always treated him like one. Naturally, the fans followed suit.

As the New Generation Era turned to the Attitude Era, the Undertaker underwent his first major change in character. Instead of a silly zombie-like monster, he became a satanic priest of darkness. With many of his biggest names now working for WCW, Vince relied on Undertaker to help anchor the roster alongside the superstar Stone Cold Steve Austin. Their match at SummerSlam 1998 was the biggest match Vince could have possibly booked, and they marketed it (with Highway to Hell as its theme song) as big as they would a WrestleMania. It paid off and fan interest that had started to turn back WWF’s way rose substantially throughout late-1998.

Undertaker continued his Lord of Darkness persona until injuries slowed him in mid-1999, sidelined him in late-1999 and forced him to skip WrestleMania 16 in early 2000. By the time he was set to return in May of 2000 the “cartoony but adult-oriented” early-Attitude Era had been replaced by a less ridiculous product anchored by The Rock and Triple H. Undertaker’s Lord of Darkness would not have really fit in so he underwent another big change to his character, debuting at Judgment Day 2000 as a countrified redneck biker. Gone were the druids and the funeral march, in its place was leather vests and Limp Biscuit. It was silly in its own way, but it fit perfectly in with the times of the company.

And that’s really been the meaning behind the “vrsatility” of the Undertaker. There really was no versatility to the monster that debuted at Survivor Series 1990, but there was with Mark Calaway. He has proven, over the last twenty five years to have remarkable skill in adapting his style to the many changing landscapes of wrestling. From the over the top cartoons of the later-Titan era, to the lowest common denominator of camp in the New Generation Days, to the teenage grit of the early-Attitude Era and the raw and real days that followed that. Undertaker has always been about being a representative of the wrestling world around him. When he returned to the Deadman persona at WrestleMania 20 he did so to a wrestling world hungry for a gimmick—any gimmick. Those were the days where everyone was 6’3, lean and straight-jawed, with abs for miles and zero personalities anywhere. Randy Orton is the posterchild of those days. Suddenly a gong, a trenchcoat and hat, and a pair of white eyes was a welcome change of pace.

He carried the Smackdown brand on its in those days, as young superstars moved from there to Raw, he stayed and continued giving the show its superstar to watch every week. And like wrestling’s fine wine, he somehow managed to get better in the ring with each passing year. In 1995 it was unheard of to think the Undertaker could put on a match of the year contender; he was a remarkably agile for his size, but he simply wasn’t allowed to do more than lumber around the ring in those days. But by 2005 he was flying around, putting on clinics against everyone from Kurt Angle to Mark Henry.

When he stepped away from fulltime performing, after WrestleMania 26, he left a void that has yet to be filled. He returns now, a few times a year, and reminds us of how great he was and how that void he’s left may never be filled. There’s never been a wrestler like him. No one has been better skilled at adapting to the times, and finding a new way to entertain the masses in his own unique way.